Well, it’s a weirdly deep week for new comic series (can anyone say San Diego?), and we’ve got a lot of ground to cover.  This week saw zombies, chickens, camels, Jesus Christ’s twin sister, and Tonto grace the pages of the new No.1’s, so let’s dive in and try to sort it all out. 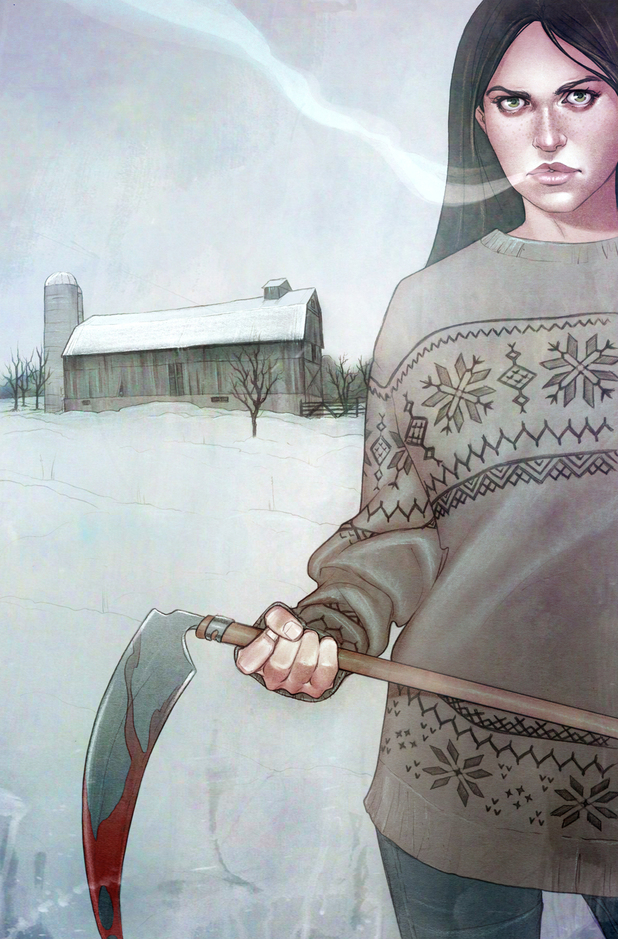 The best of this weeks crop is the first book we’ll look at here, Revival No.1, from Tim Seeley (Hack/Slash, Withchblade) and Mike Norton (Runaways, Gravity). The first of two tales that seem to solidly tackle religious issues, Revival is the story of a small town in the frozen north of Wisconsin that has seen the dead returning from the grave.  These zombies may walk among us, but they don’t seek our brains – they just want to live their lives, or so it seems at first. No one is quite sure what to make of them, least of all our protagonist, Officer Dana Cypress. A single mother, police office and daughter of the local sheriff, Dana is the first officer assigned to a small task force to investigate crimes relating to the “revived”, some of whom merely seem to want to return to work. They don’t drag their undead limbs through the streets, but they have sparked a nationwide discussion on religion, science and ethics that plays out in both the media and the townsfolk’s day to day lives. Dana, a tough and capable cop on the verge of promotion, doesn’t seem to think this is exactly where she wants to be going, but her mettle proves valuable soon enough, when Dana and her college age younger sister get mixed up in the first incident hinting there might be more malice in these re-animated small-towners than meets the eye: a surprise ending that makes for a fantastic first issue of any book. 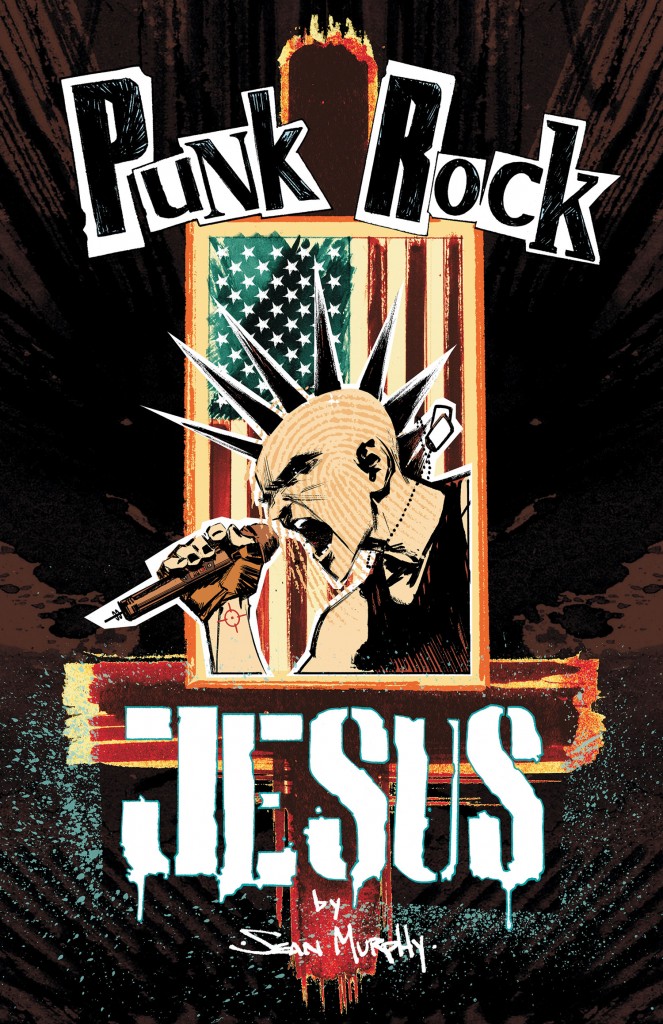 Hitting right at the heart of the media’s interest in the fight between religion and science is the new book from Vertigo Comics, Punk-Rock Jesus No.1 by writer artist Sean Murphy (JOE THE BARBARIAN). This black and white actioner is a little all over the place, especially when you consider that the premise is a world wide reality TV show in the near future about the selection of you average American virgin to be the host mother of the clone of Jesus Christ. How much more all over the place can it get, you might ask? It begins with a hit on an I.R.A. gunman and his wife and child, Thomas, who grows up to be head of security for this insane farce of a media event. The concept, even for a comic book, is so far-fetched as to strain credulity here. The miracle is made possible by research from Dr. Sarah Epstein, “world famous geneticist and environmentalist”, who apparently already saved polar bears from extinction through cloning. How do we know this? Because she kept one! AS A PET, apparently. She also agreed to use reconstituted DNA from the shroud of Turin to clone what may or may not be the son of God, for the true believers, in an offshore laboratory provided by her corporate sponsors so as to skirt human cloning laws. The lengths this so called “Scientist” goes to pull off such a ridiculous event, and the levels of unprofessionalism, corporate greed, media chicanery and downright unethical medical behavior push the limits of believability so far that I barely made it through the book. We’re never quite sure if Dr. Epstein, Thomas the IRA kill-happy security guard, or the baby Jesus (born twins, actually) are the protagonists of this story, despite the title. We know it won’t be Jesus’ twin sister, fiendishly dumped by the rep from the corporation behind all this, giving us (I suppose) the villain of the piece. Here, I put down the book for good. The sensational killing of children for no other reason than to prove the evil nature of the antagonist is an unforgivable sin, in my opinion, and thus I’m done with this rag, and you should be to. 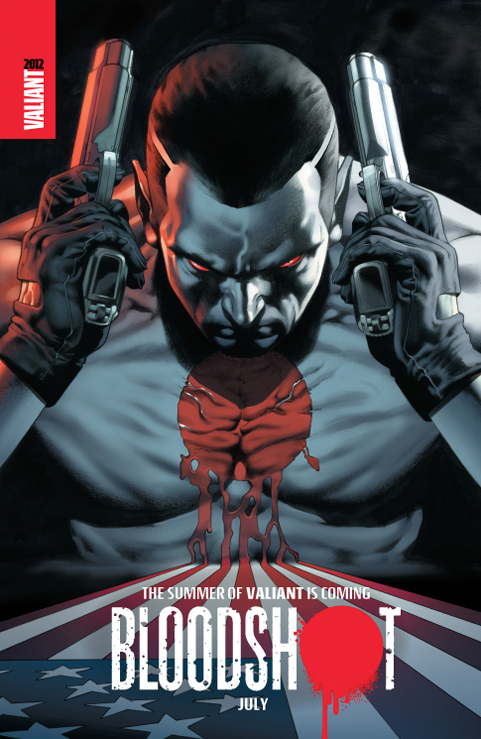 Valiant Comics continues its company wide reboot with Bloodshot No. 1. This book seeks to relaunch the tale of one of the companies most famous titles, but honestly, I had never heard of the guy. Bloodshot is a former… well he used to be SOMEBODY for certain, but who that might be is up for conjecture. We know for sure that he has had billions of nanite machines injected into his bloodstream that turn him into some sort of super soldier, and that he seems to get blown up. A LOT. His memories of who he is and what he stands for are implanted by those who control him, it turns out, and are hackable by those who wish to break that control. What appears to start as the tale of a family man caught in a warzone becomes more a battle between two mad scientists for the Frankenstein monster of the moment, and while the book may lead to an interesting discussion of the value of identity (though I doubt it), it mostly seems to be an excuse for nearly naked men to shoot at things and blow each other up.  In previous incarnations, Bloodshot was a mafia assassin, but that plot seems to have been cast by the wayside. Then again, in what seems to be a desperate attempt to cash  in on the twists and turns of a story of a man without a memory, who knows where we might go. 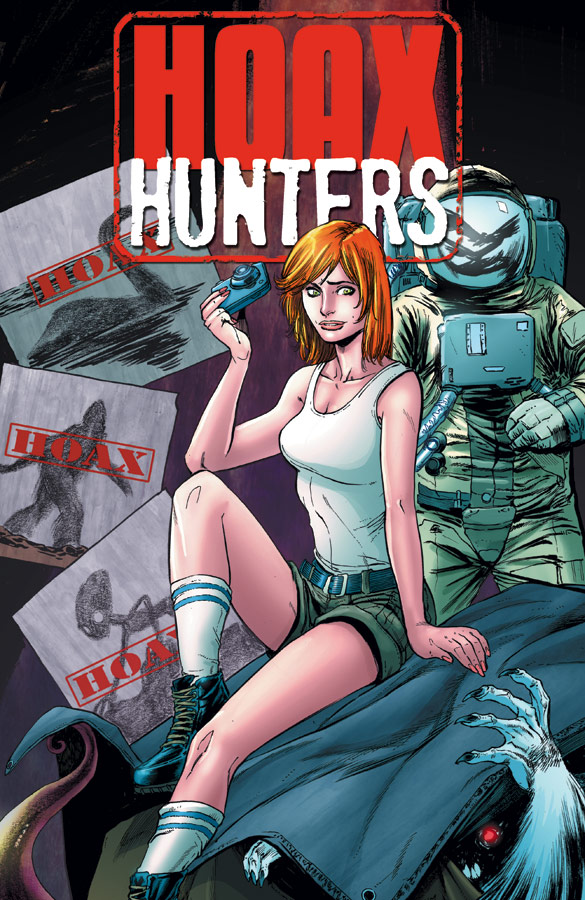 In even further unusual territory, we have Hoax Hunters No.1 from Image Comics and the minds of Michael Moreci and Steve Seeley (HACK/SLASH), with art by Axel Medellin (Elephantmen). Yet another interesting look at how much we distrust the media, this is a tale of Mulder and Scully meets American Pickers. The Hoax Hunters are, on the surface, the cast and crew of a reality series that debunk local myths and legends about haunted mansions, aliens, and various cryptozoological monsters and legends. Their true goal is to seek out the actual things going bump in the night all around us, and find ways to keep them all under wraps. It’s unclear for whom it is they are doing all this, maybe a government agency. One member of the team is apparently a murder of crows trapped inside an astronaut’s flight suit,  somehow walking around. Turns out, he’s the cameraman.   The host of the show, a woman named Regan, and the show’s producer Jack, seem to be in touch with a great many of the demons and boogeymen out there,  though their motives are a bit unanswered.  This whole book, in fact, lead to more questions than answers, and it turns out there was a Hoax Hunters No. 0 a few weeks back, so perhaps that will shine some light on this for us.  Otherwise, it feels a touch like a cautionary environmental tale, if the Loch Ness monster and Yeti are, in fact, part of the environment.

There were a few other titles that popped up as No.1’s this week, but most of them were spin-offs or restarts of existing series.  The Crow No.1 from IDW sets our next undead hero as an American Crow in Tokyo, avenging the body-snatching of his Japanese girlfriend in a story so convoluted and poorly illustrated it was too hard to follow. The Lone Ranger: Snake of Iron No.1 tells the tale of the infamous duo of Western heroes as they separate: Tonto to combat prejudice and an angry band of Kiowas on a train bound east, and the Lone Ranger tracking a Spirit Horse that has the Kiowa reservation ready for war and that turns out to be … a camel. The best of the spinoffs was CHEW: Secret Agent Poyo, and while this premise sounds as ridiculous as those before it, it’s the only one that works, mostly because it never takes it self too seriously (or for that matter, seriously at all.) It’s a side story of The Eisner Award winning Chew series about the deadliest fighting rooster ever to walk the earth, Poyo, and his attempt to keep a mad scientist who is LITERALLY determined how to make it rain Cats and Dogs, destroying the United Kingdom in a downpour of it’s own livestock. Yeah, that’s for real, and it’s a laugh riot.

Meanwhile, due to an unusual delivery error in the southwest, some timing problems, and my vacation to Austin, TX (land of the breakfast taco), last week’s No. 1’s got a little lost in the shuffle.  Below is a wrap-up of last week’s best offerings: