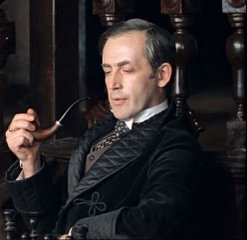 If anyone were to ask me what I think of Sherlock Holmes, my response – he’s a cantankerous, brilliant man with an infectious laugh, reckless habits, and a great sense of compassion – would be inspired by Vasily Livanov, the Soviet actor who portrayed the famous detective in several TV series made by LenFilm from 1979 (the year I was born) to 1986. Doyle’s detective stories were part of most Russian kids’ childhood education, or at least kids of my generation, and Livanov’s portrayal earned him not only adoring and lasting love from countless fans, but also an honorary membership in the Order of the British Empire in 2006.

I say all this not from some sort of elitist sense of pride (although an inkling of it is there), but because I’ve come to realize that one of the best things about Sherlock Holmes is that, like another strange genius most of us love, each generation has their own Holmes, with a new face and slightly different quirks. That’s what makes Holmes lasting and immortal, as he is reinvented by directors and actors, from Rathbone to Downey, Jr. to Cumberbatch. The same goes for his trustworthy partner, Dr. Watson, who has remained a steadfast and endearing companion through countless film and TV versions. 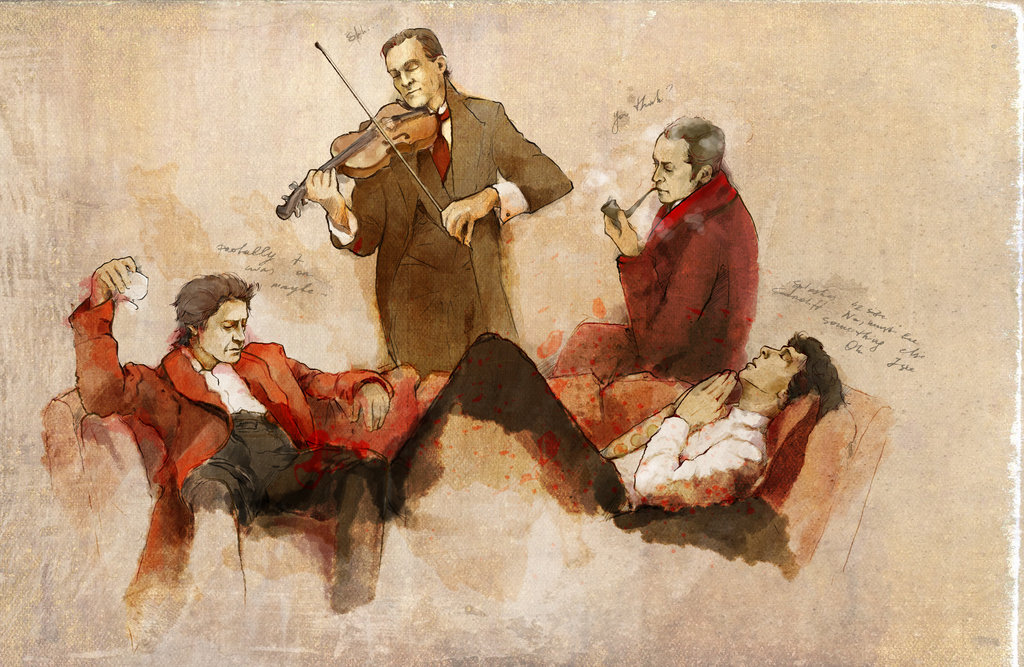 But in the end, where would we be if it wasn’t for the stories, in the first place? Whether films and series interpret the existing stories, or use them as a departure point for new episodes that seem in line with Holmes and Watson’s adventures (BBC’s Sherlock has done a good job of that), Doyle’s stories are still the source. So, in the spirit of appreciation, I’ve put together a short list of a few of my favorites (it was so hard to narrow it down). So if you haven’t had a chance to read Doyle’s mysteries before, I hope this piques your curiosity. I admit, all my favorite stories are from the first three volumes written by Doyle (The Adventures of Sherlock Holmes, The Memoirs of Sherlock Holmes, and The Return of Sherlock Holmes). The e-books are available for download for free (links at the bottom of the post).

Now then, the list in an arbitrary order of preference. I’ve done my best to avoid any major spoilers.

1) The Adventure of the Speckled Band (The Adventures of Sherlock Holmes)
This story combines some of the best elements present not just in Sherlock Holmes stories, but mystery stories in general. (Doyle also considered it his favorite Holmes story and I’m obviously in agreement.) There is a damsel in distress, an intriguing and eerie death, and a cold-hearted father figure. It’s an example of a “locked room mystery,” where Holmes and Watson have to figure out the nature of the crime that took place in a supposedly locked and inaccessible room. Plus, if you’re into satisfying endings where the bad guys get their just rewards in the best way possible, this one has it, too.

2) The Adventure of the Engineer’s Thumb (The Adventures of Sherlock Holmes)
The Industrial Revolution brought with it many new and exciting elements to be included in mystery fiction of the time. In this case file, Watson recounts the story of a young hydraulic engineer who arrives at the Baker Street digs with a severed thumb and a confusing story that needs to be untangled. It’s a creepy little story (no supernatural elements – just criminals) that made me really terrified about enclosed spaces when I read it as a kid.

3) The Adventure of the Musgrave Ritual (The Memoirs of Sherlock Holmes)
In short, this is a story about a man’s disappearance and about a secret society with its mysterious rituals. Holmes deciphers the hidden meaning in the riddle that is a family document, dating back to the 17th century, in the house of his acquaintance Reginald Musgrave. When Musgrave’s butler is caught reading the document, he disappears shortly after (along with the maid), and Holmes is brought on to figure out the disappearance. Who doesn’t like stories involving secret societies with their cryptic rituals?

4) The Adventure of the Dancing Men (The Return of Sherlock Holmes)
Holmes’ new client, Mr. Cubitt, arrives with a piece of paper showing a cryptic arrangement of little dancing stick figures.  The note arrived by mail and has made his wife distracted and upset, although she wouldn’t tell her husband why. More notes bearing similar figures appear and Holmes decides that they are a cipher. Solving the code of the dancing men will help provide the answers to the mystery. It’s a good, solid mystery story and when I first read it as a kid, I went around drawing the little dancing men on figures of paper. Oh, kids.

5) A Scandal in Bohemia (The Adventures of Sherlock Holmes)
The fact this is one of the more frequently adapted Holmes stories just makes it all the more worth reading. The premise is that a compromising photograph, showing an opera singer named Irene Adler and the King of Bohemia, must be recovered by Holmes to avoid it being used as blackmail against the King as he prepares to wed a princess. The story has great elements of social intrigue and potential for scandal and Holmes gets to dress up in a disguise (I just love when he does that). The most notable part, however, is the way Holmes matches wits with the clever and resourceful Adler, with Doyle creating the most notable character (besides Moriarty) in the entire canon.

6) The Adventure of the Yellow Face (The Memoirs of Sherlock Holmes)
Holmes and Watson are bored. They haven’t had a case for a while. Enter Munro, a man who is suspicious of his new wife’s strange behavior and enlists the detectives’ assistance in figuring out the truth. When she thinks she is not being watched, she visits a neighboring home where a mysterious person wearing a yellow mask peers through the window. What is the truth behind Munro’s wife’s behavior and who is the stranger in the window? This is not so much a stellar example of Doyle’s mystery writing as a departure; it’s a sentimental story, with an ending that hints that Doyle was perhaps more socially progressive than the community of the time. It’s also a rare example of a case where Holmes actually makes mistakes in his deductive reasoning.

7) The Adventure of the Copper Beeches (The Adventures of Sherlock Holmes)
Similarly to The Adventure of the Speckled Band, this is another one that reminds me of Gothic mystery fiction. Holmes is approached by a young woman who is alarmed after taking a job as a governess, which comes with a few strange conditions. For one, the new employers required that she cut off almost all of her beautiful, long red hair. They also sometimes make her wear a bright blue dress and sit with her back to the street-facing window, where she realizes a man stands outside, watching her. Add to that a really foreboding atmosphere at the house (including a pair of creepy housekeepers) and you have a great little mystery on your hands. Never fear, Holmes solves it and the young woman escapes unscathed.