I know that it may be hard to believe for some of you but FOX is doing something right with this whole supernatural TV show thing by bringing us Sleepy Hollow. (I know it’s only been a few episodes.) I’ve been watching TV as long as I’ve had concrete memories, and I’ve been disappointed by TV shows for just as long. FOX in particular has disappointed me several times – RIP Firefly, the wound may be old, but it still stings. Sleepy Hollow, a fun and scary show, gets some things really right by treating the character of Abbie Mills (Nicole Beharie) like an actual person, making me forget some of the show’s flaws. 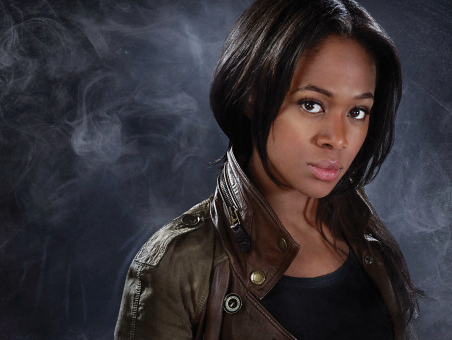 Scandal, a political drama on ABC, is the first show since 1976 to have a Black woman as a lead, taking the leap without having a White male as the focal point of the show, even with its 10PM Thursday time slot. This is so rare and so historical that even the Emmy’s had to make a big deal about it. Women still have fewer starring roles in film and television, and if that woman is Black… well, it’s like she doesn’t even exist. Some of the more popular shows recently – Breaking Bad, Mad Men, House of Cards – all focus on stories of their White male leads, with little to no people of color in the supporting cast, despite this supposedly being the “Golden Age of Television“. These male leads get to make mistakes, be single-minded in their beliefs, do deplorable acts, and the audience will still cheer for them, excusing those actions because it’s their story. The same freedom isn’t as often given to characters of color, unfortunately. This is what makes Sleepy Hollow’s choice of having Abbie Mills, a Black woman, as its lead so interesting and daring. (May contain spoilers if you haven’t yet started the show.)

Within the first episode we are introduced to Abbie Mills, a lieutenant with the Westchester Police Department. When Abbie was in high school, she and her sister saw some supernatural business in the forest and (of course) nobody believed them. Later on, Abbie’s mentor, someone she respected and loved, was murdered by a headless horseman. Still dealing with that loss, she meets Ichabod Crane, a man who had died during the American Revolution and now is alive and prophesied to protect the world during the apocalypse. We get to see Abbie feel scared that she’s going out of her mind; heartbroken as she cries for her mentor who was more of a father than her own; embarrassed about being questioned about her ex-boyfriend. Abbie even gets a bit snarky when being haunted. I love that she’s given a range of emotions as a character, and the show does it while still barely mentioning Abbie’s blackness. Sure, at one point she does remind Ichabod who she is – “a Black female lieutenant” – but for the most part the show doesn’t focus on it. The same goes for Andy Brooks, played by John Cho, and Captain Frank Irving, played by Orlando Jones. They are people in this town, not racial stand-ins: police captains and officers doing their jobs, and studying for the FBI entrance exam, in Abbie’s case. Despite only around 80 minutes of actual storytelling time, they have backgrounds, hopes, dreams, and fears.

The narrative tone of the show pushes us to connect with Abbie Mills as the audience stand-in, which is so important to shows like these. Not just on camera but even in the promotional materials, we are shown the importance of Abbie Mills and Nicole Beharie, who portrays her. When you see her in promo images, she is looking straightforward and standing in the foreground, with her hand on her gun or badge. This placement shows Abbie in a position of power. Ichabod Crane may have been the focus of “The Legend of Sleepy Hollow” story, but here he is sharing the spotlight with Abbie Mills. Where he is the old world, she is the new and they need each other equally. Abbie can’t get through this apocalyptic war without his knowledge of the past and his visions. Ichabod can’t do anything in the present setting without her real world knowledge and ingenuity.

This partnership is the heart of the show, and with Nicole Beharie getting second billing, this makes her the most important woman on the show. In a television climate where Black women in fantasy television are depicted as motiveless villains (Tamara on Once Upon a Time), punching bags (Tara on True Blood), or plot helpers (Bonnie on Vampire Diaries), it’s nice to see a Black woman propel the plot forward as a fully realized character. I can’t wait to see where the show takes her.

(If you want to hear Nicole Beharie’s thoughts on the project, she did a lovely interview during her press rounds and Tumblr has already gotten in on the action with several blogs about our awesome leftenant.)

MK is a black nerd currently living in the NYC area who writes and directs movies, is extremely enthusiastic about food, and moonlights as an amateur pop culture historian. She can be found reblogging and musing on a variety of subjects on her Tumblr.
View all posts by MK McFadden →
This entry was posted in guest post, television and tagged race, Sleepy Hollow, woc. Bookmark the permalink.