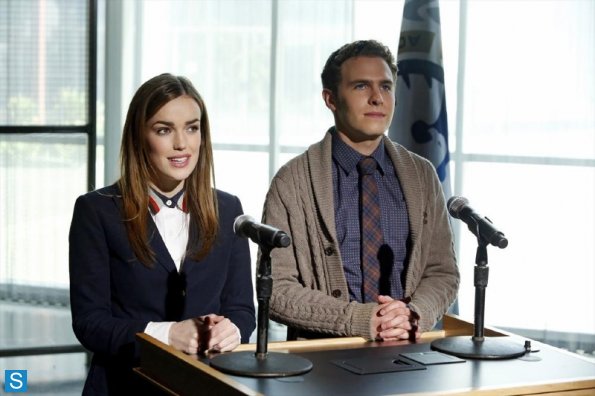 Last week’s episode of Marvel’s Agents of S.H.I.E.L.D., “The Magical Place” was a high-ish point of the season, delivering on the mythology and the film ties that the show has been promising (and largely failing) to give us since last fall. From the cold open for this week’s episode, “Seeds”, it seems like we might be going right back into Problem of the Week territory.

One of the common complaints against the series is the failure to capitalize on its comic book heritage, making it virtually indistinguishable from your garden variety weird science procedural. It’s hardly surprising that our visit to the S.H.I.E.L.D. science academy owes less to Steranko than to college orientation videos. Save for the memorial to fallen agents (which includes a shout out to Bucky Barnes, lest we forget that there’s a Captain America sequel in three months), the academy could be any campus anywhere.

Ward, Skye and FitzSimmons return to Hogwarts after an incident involving what seems to be an ice bomb, pointing to some naughtiness afoot at the alma mater. Of course, Leo and Gemma were the Chosen Ones back at the academy, being the youngest graduates ever, etc, etc. FitzSimmons are there to try and encourage the student body from going to the dark side, name-checking Hydra and AIM, while Ward attempts to track down whomever is deep-freezing S.H.I.E.L.D.’s best and brightest. Coulson and May, Meanwhile, head to Mexico City to track down a lead on Skye’s past, although they both admit that it’s just busywork to distract them from Coulson’s understandable obsession with what he learned last week. I wish I could tell you whether the location scenes were credible, but I’ve never been, so it could have been East L.A. I suspect, given the preponderance of the same cockfight poster over and over, though, that it probably wasn’t a location shoot. At least there is a fun, if relatively brief, scene where Coulson and May apprehend their mark, one of the agents that picked up the infant Skye.

Of course it turns out that Skye is an 0-8-4 (S.H.I.E.L.D. code for object of unknown origin, as we learned way back in the pilot). “Wherever she goes, death follows.” Suddenly I’m getting really tired of everyone being so damned special. At this point, I feel kind of sorry for Ward, since his only distinction is being good at his job.

Really, “Seeds” is mostly here as a backdrop for the stunning revelation that Skye is The Girl Who Lived and that a lot of people died for her to be here. The relevant information is packed into two scenes that total maybe five minutes of run-time, with 38 minutes of padding. Decently-made padding, but padding nonetheless. I’m not saying that the academy plot is bad, but FitzSimmon’s speech on not becoming Death Eaters was too on-the-nose, and at no point did things get especially surprising or thrilling. The kid that looks like a Slytherin is a Slytherin. I don’t know if I’d characterize the return of an early episode bad guy as a pleasant surprise, or just another symptom of S.H.I.E.L.D. refusing to follow the ridiculous, fun comic-book path. I would have liked it better if there had been a Johann “Red Skull” Schmidt/Aldrich “Mandarin” Killian-type evil scientist. I’m basically begging for a supervillain. Just one. That’s all I’m asking for. The completely non-threatening, completely off-screen Clairvoyant doesn’t count. Remember The Master on Buffy? He showed up in the first episode. Hardly a week went by during the heyday of The X-Files where the Cigarette Smoking Man didn’t drop by for at least one scene to say or do something cryptic. That’s what I want.

There’s some okay sci-fi whiz-bangery, but lacking flair, the motivation seems small scale and petty. The show also has the temerity to tease yet another superhuman, only to immediately shuffle him off-screen, which is something that keeps happening. First the gravity dude, Mike Peterson, now the Cryokid: it’s like the production team is telling us, “No, no, really, it’s going to be awesome any day now!” It’s getting tiresome to see S.H.I.E.L.D. putting off the fun stuff; hell, it took half a season to move Coulson and Skye’s storylines forward in any appreciable way, and they’re not even superheroes. I would like for the series to do something really cool already, embracing its roots in the MCU. The movies are made effective not just by their huge budgets, but because they take the ridiculous aspects of the comics at face value, unapologetically making them work in a real-seeming world – flying, costumes, and cackling bad guys and all. S.H.I.E.L.D. doesn’t even have the flamboyancy of, say, Fringe or X-Files, which are arguably the standard-bearers for this particular genre. It seems like the production team is afraid. Afraid to put Mike Peterson in a real costume. Afraid to have the cryobombers be larger-than-life. Afraid to do anything that might scare off a network police procedural audience. The timid approach is just wrong-headed, and time is running out for S.H.I.E.L.D. to deliver.