We’re Back from GeekGirlCon! 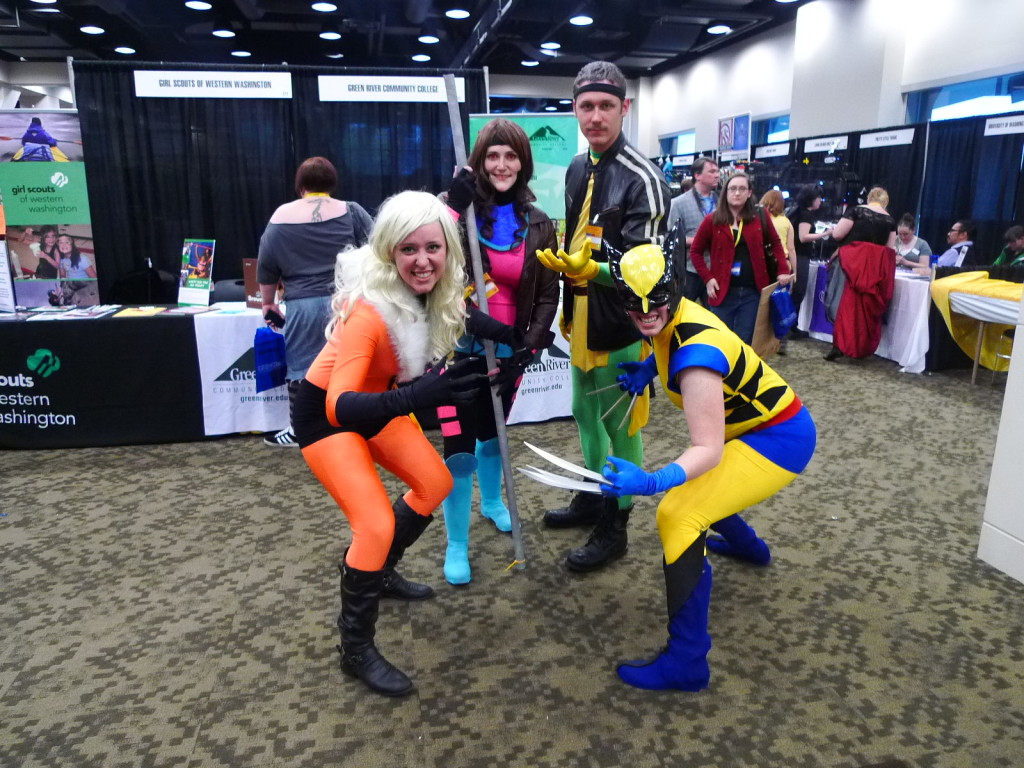 Awesome cosplayers are awesome (drop a note if that’s you, so we can caption it!)

Another GeekGirlCon has come and gone, and this time it was nice to visit the city of Seattle in October, when the air is cool and the trees are wearing their autumn finery. It was my second time at the convention, and a first time for Mace. Between the two of us, we tried to cover as much ground as possible, with a few kick-off events, various panels and workshops on both days, and a good amount of time spent wandering the exhibit halls. We’ll share our panel recaps later, once we’ve both recovered from our colds. For now, general impressions. 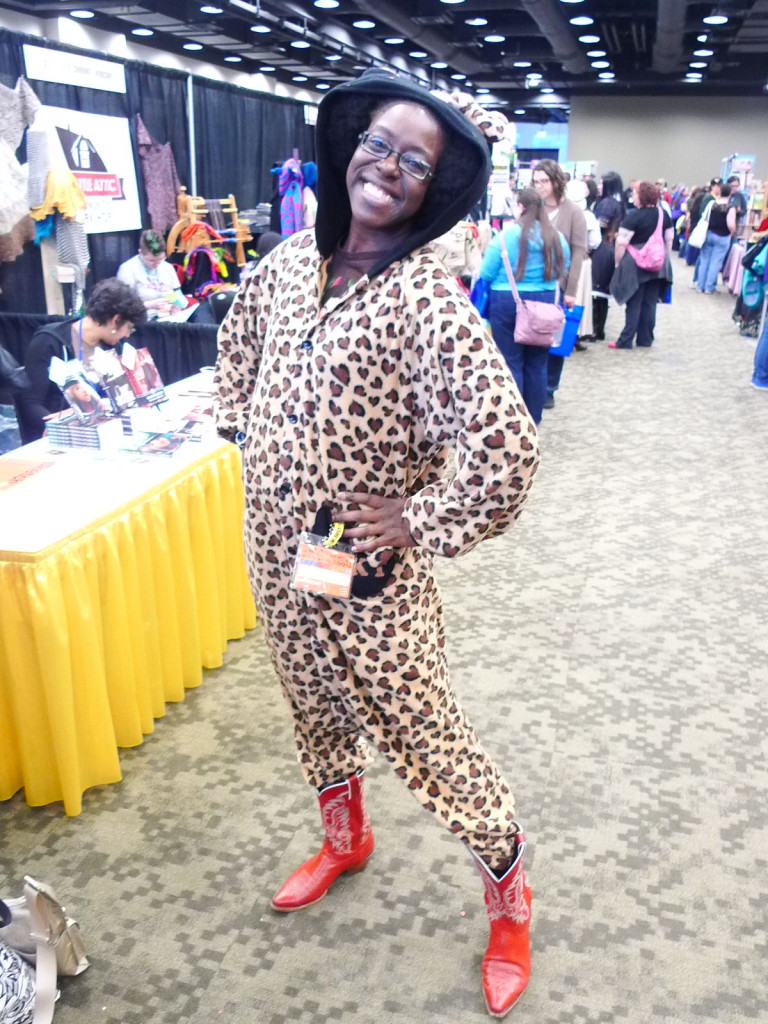 The incredible Lola LeSoleil at the Con, who wowed us the night before as Princess Leia at Bechdel Test Burlesque

Friday we dropped by the Tap House Grill around the corner from the convention center. It was an opportunity to grab a bite and a drink with con attendees and organizers, and to get an idea what people were most excited about, from tabletop gaming to the spotlights on Denise Crosby and Kelly Sue DeConnick. The buzz in the room was that of excitement and anticipation, as we left to head over to our second pre-Con event: Bechdel Test Burlesque. The show was full of acts to appeal to every fandom, from comics and Whedonverse, to video games and internet memes (Grumpy Cat!) Big kudos to GeekGirlCon and the Four Redheads of the Geekpocalypse for a cheeky, sexy and over-the-top nerdy event.

At the convention, there were a lot more parents with young children, as well as teenage geeks this year. Many times I overheard kids excitedly discussing their favorite comic book characters or games, and it reminded me just how fun it is to discover your hobbies and interests for the first time. There is something really moving about seeing so many young people in a comfortable space where they can feel at ease, while also bonding with their parents who brought them to the Con. That enthusiastic, playful energy wasn’t just limited to the younger set, as plenty of geeks and nerds of all stripes came to GGC, making it a completely sold out event both days. As always, there were many fine examples of cosplay on display, although I took only a handful of photos. Some of my favorites include a pair of Draugr deathlords from Skyrim and a very adorable Wookiee. GeekGirlCon will be putting up their official photobooth gallery soon. For now, check out this great set of photos taken by Danny Ngan. 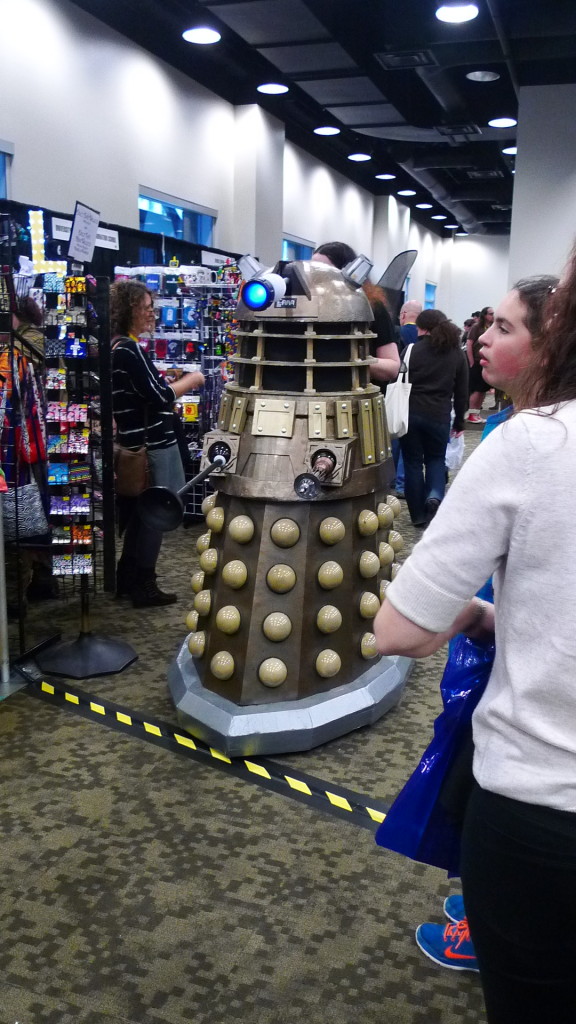 On Saturday, we kicked off the morning with two panels back-to-back: Deconstructing the Mary Sue Myth and Race in Costuming and Performance. Both were thought provoking, smart discussions, one about the challenges of writing a fleshed out female character, and the other a discussion of appropriation and racism in cosplay and burlesque. (As I mentioned, we’ll write up our more in depth thoughts at a later time.) Both discussions were also the first examples of what would be an ongoing comment echoed by many at the Con: 50 minutes for a panel just isn’t long enough. This is something I remember from last year as well, and while I know panelists probably could arrive with an ironclad outline that would leave room for audience questions, it would also make the panels less engaging in an organic way.

Throughout Saturday, we dropped in for various panels and STEM workshops, which included a visit to the DIY Science zone, as well as the panels Best of Both Worlds: Careers Where STEM Meets the Humanities, and Black, Latina, Girl and Geek: A Tale of Acceptance.
At 6:30PM, I sat down with Jamala Henderson, Jarrah Hodge (who also does the awesome blog Trekkie Feminist) and Mary Czerwinski for our panel Is Star Trek a Feminist Utopia. The name for the panel was inspired by the fact that Gene Roddenberry, when creating the Star Trek universe, wanted to visualize a future utopia of equality and representation. Time constraints kept us from being able to really dive into the many things we wanted to discuss, but to say that this was the highlight of my weekend at GeekGirlCon would be an understatement. I’m still thinking about it with a smile. 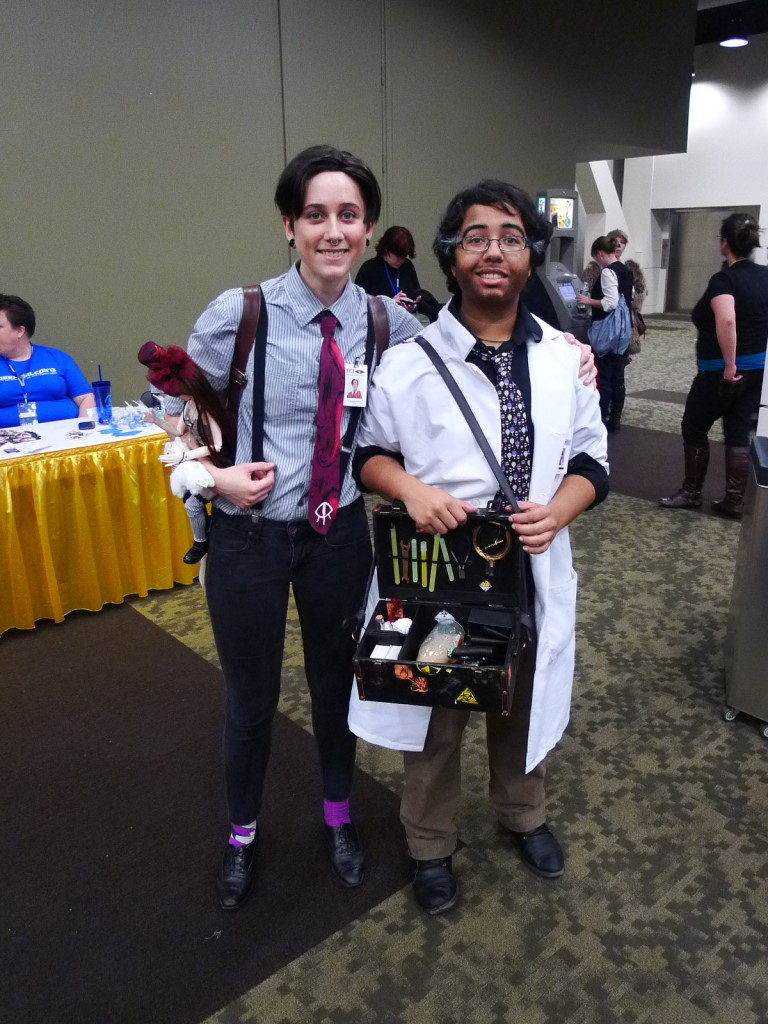 Night Vale! RE and AJ of Kinsey House

After the panel, a whole slew of us set off to dinner and karaoke before hitting the hay to start on day two. Sunday was mostly for shopping from the vendors in the Exhibitors Hall and Artist Alley, but we did make it to a few panels. First was a Spotlight on Denise Crosby, known to many as Lt. Tasha Yar on Star Trek: The Next Generation. Ms. Crosby was interviewed by Jamala Henderson, and it was a wonderful conversation on aging with pride, the challenges women face in Hollywood, and what Tasha Yar would be up to these days. Other panels we attended were Careers in Science; Two Steps Forward, One Step Back: How Feminism Has Changed Pop Culture; and (Re)Creating Female Sexuality in Comics.

Overall, this was another enriching, fun weekend, and the event organizers have already announced that GeekGirlCon will be returning for its fourth year on October 11-12, 2014. My fellow Star Trek panelists and I are already brainstorming ideas for next year. For those who wonder why there is a need for a convention like GeekGirlCon, the panel Changing Culture in Mainstream and Alternative Spaces focused on answering the frequently raised concerns. As I was unable to make it to the panel myself, I really appreciated these recaps, which point out how the presence of conventions like GeekGirlCon or GaymerX is indicative of certain needs not being met by larger conventions, as well as growing form of activism by being present and vocal.

There is a survey available for those who attended and I encourage you to fill it out. I’m a big fan of GeekGirlCon and salute its organizers for their continuing hard work. Still, while the convention manages to do a lot of things very well, it still has room for improvement. Organizationally, considering that the event is put on by a team of dedicated volunteers who all have other jobs, schoolwork, family obligations and schoolwork, I think a lot of it could be improved by getting more volunteer staff. When it comes to programming, longer time slots for panels would be helpful, even if it’s just an extra 10-15 minutes per slot. Lastly, when it comes to programming, some have pointed out that it would be great to see programming on trans* issues, allies and advocacy, and while there was a lot of diversity among the panelists, there could still be improvement in the number of workshops and panels presenting discussions of disability, race, size, and age, and how they are represented in geek culture. Considering how receptive to feedback and communicative GeekGirlCon staffers are, I’m certain that whatever suggestions they receive, the planning committee will bear them in mind for next year.

Stay tuned for more panel recaps and highlights of some of the vendors and artists we met! Did you go to GeekGirlCon? Tell us in the comments what you thought, which panels you attended, who your favorite vendors were!

This entry was posted in events and tagged geekgirlcon, ggc13. Bookmark the permalink.

1 Response to We’re Back from GeekGirlCon!