Broken Age as a Critique of Privilege 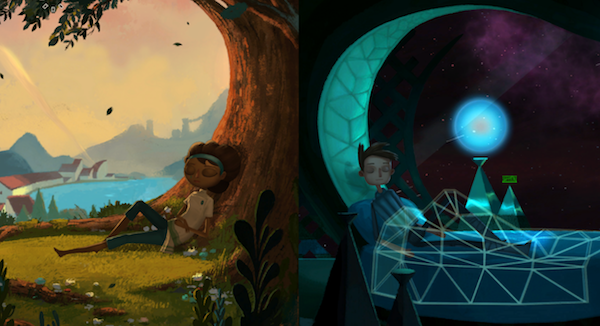 Opening of Double Fine’s Broken Age. (All images screencaps from the game.)

As a Kickstarter backer, I was very excited to finally get my hands on the new Double Fine adventure game, Broken Age. In this game, players can switch between two protagonists as they go through their own (initially disconnected) stories. Excitingly, one of the protagonists, Vella, is a young woman of color. At first I was disappointed to see that the other protagonist, Shay, was another standard young white male. However, as I played through the game on the night of the release I was excited to see that Shay’s story, as well as Vella’s, held hidden depths. It became clear to me as I progressed that Shay is not just another white male hero, and he’s not even just another critique of the trope. Shay’s story, through his attitudes and interactions with the world around him, is actually a critique of a gamer mindset that leads to that trope. (Spoilers ahead!)

First off, Shay is a gamer. It’s what he does. It’s what he’s done for his whole life. He lives in a completely closed off system, a spaceship which has been programmed to keep him safe and entertained. 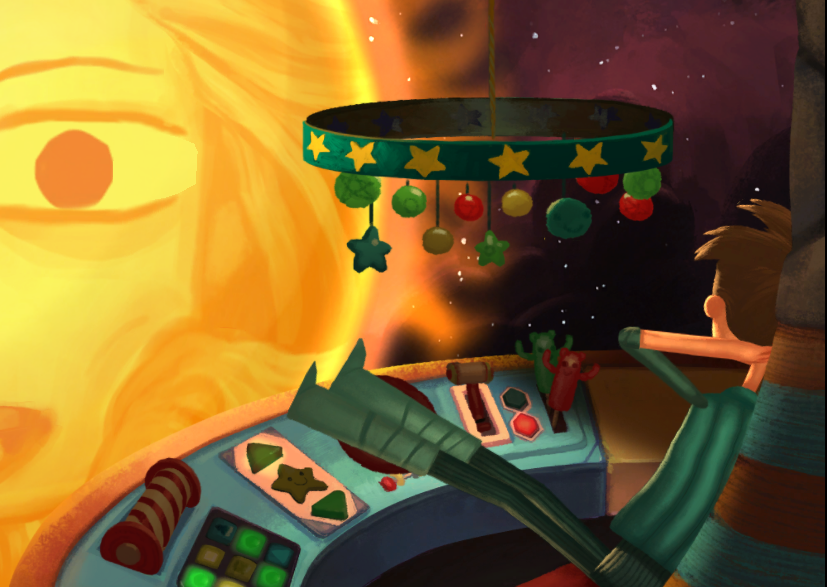 Control panel brought to you by Fisher Price

To this end, he spends his days performing a series of “missions” in which he’s cast as the hero—the outsider who has to come in and rescue the defenseless natives from problems they seem to be incapable of solving themselves. But these victims are dolls made out of yarn and the situations they’re in are equally constructed. (The double meaning of “spinning a yarn” is not lost on me here.)

When Shay eventually decides he’s had enough, he has no problem purposefully failing a mission, laughing as he plunges towards the spikes below along with screaming, terrified yarn pals. 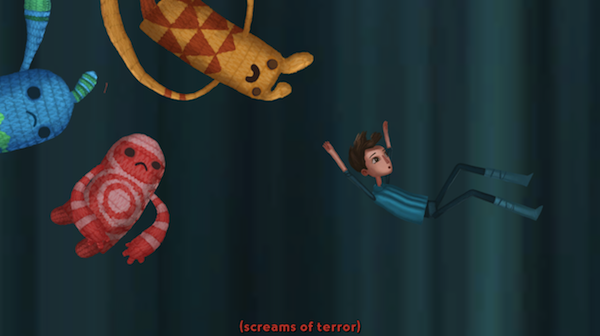 Fun for the whole family

Of course, there are no real permanent consequences to his actions because there was never any real danger. The spikes were made of rubber, and Shay has never experienced real danger in his life.

This is in contrast to Vella who is, from the very beginning of her story, fighting for her life and the lives of everyone she knows and loves. Vella is chosen by her village to be a one of the girls sacrificed to the giant creature Mog Chothra, an offering that takes place regularly to prevent him from destroying the town. Unsatisfied by the way everyone just accepts this ritual as the normal way of life, Vella decides to fight back and barely escapes. However, her actions (understandable as they are, from our perspective) do have consequences, which potentially include the deaths of everyone in Sugar Bunting, something that Vella herself feels deeply. 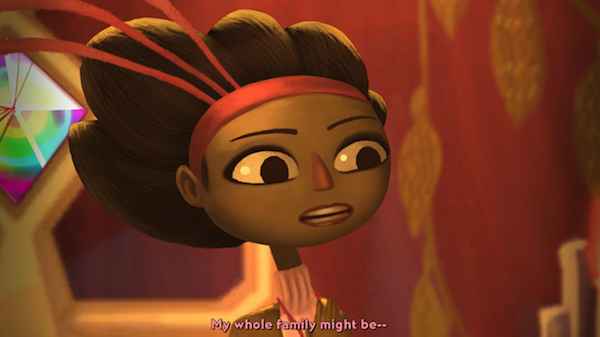 Vella faces real danger, her actions have real consequences for herself and others, and she’s very aware of it. Meanwhile, Shay is actually excited by the prospect of “real danger” when a mysterious man dressed up as a wolf comes and asks him if he’s done with “child’s play”. 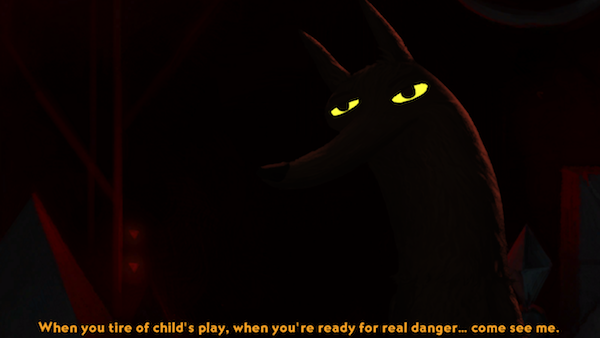 Obviously you should always trust mysterious men dressed up as wolves

Of course, what Marek is offering isn’t even real danger. It’s important to note the use of the term “child’s play” here. When Shay does come to see him, Marek again says that it’s because Shay is done with “children’s games”. It’s not that Shay is done with games, but that he’s specifically done with games for kids. He’s graduated from Rated E to Rated T and traded in his Fisher Price console for an arcade game interface. 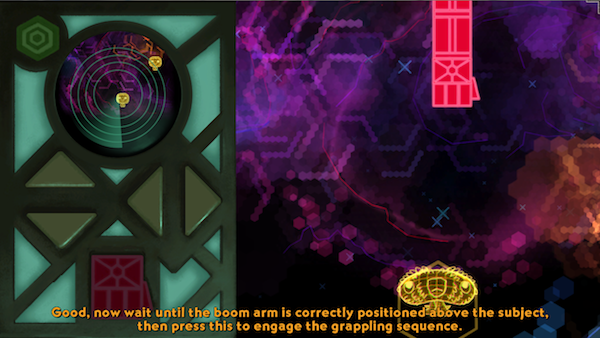 The entirety of Marek’s mission reads less like a return to reality and more like every “dark and edgy” anti-hero game targeted at teen boys, including having to make “the tough choices” of who to rescue and who to leave to their fate. Shay, of course, fits the demographic for this kind of game perfectly and eats it up. 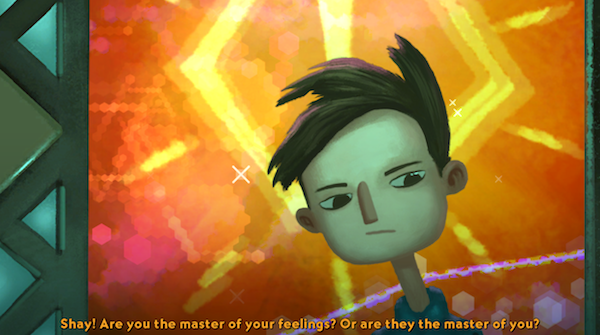 So gritty. So realistic.

Even when he and Marek plot to take over the ship, the whole thing feels set up, with contrived puzzles. The fact that your head shrinks as you travel through teleporters – which Shay is initially told is because of “quantum physics” – turns out to be caused by faulty wiring and is fixed immediately after you solve that puzzle. A toy you were given at the beginning of the game has no use but to help you take control of the boom arms. These puzzle solutions are extremely convenient and give the impression that the ship helps you to sabotage itself, all just another part of the game. 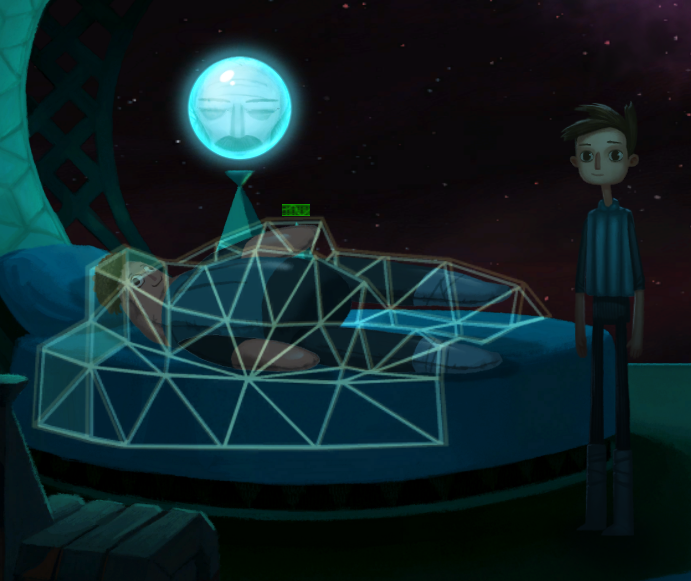 There just happened to be a blow up doll of you stuffed in that vent. Total coincidence.

Shay never really questions any of this. A superficial response from Marek is enough to silence any of his doubts. Part of this is that Shay is a gamer and of course you don’t question the game-guide. But the whole story also fits really well with Shay’s self image. Of course he’s the one who has to be the rescuer; of course he has to be the one to make the tough decisions; of course Marek couldn’t do any of it himself. Shay has spent his whole life with the entire ship telling him how smart, brave and heroic he is. The Space Weaver even once outright tells him that he is the center of the universe. 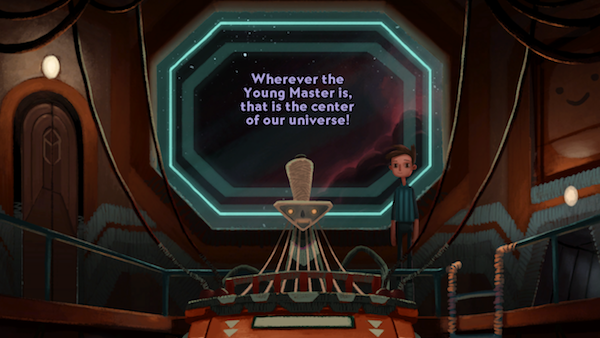 The transporter shrinks his head, everything else makes it bigger

So he doesn’t question his position as the designated hero, but he also doesn’t question the premise of the adventure. He believes everything Marek tells him. He believes that there’s a secret war, that these innocent creatures are being held captive, that enemy ships are approaching, that he can’t go see the creatures because of “germs”, and so on and so forth. Shay doesn’t question any of this because it makes sense to him as a game narrative. He is everyone who ever played the first Bioshock. 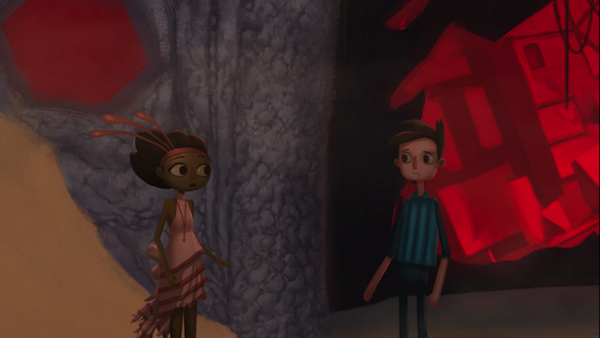 While Shay thought he was rescuing helpless creatures, he was actually kidnapping sacrificial girls. He was never the hero at all. And it was his unquestioning conviction that he was the hero that led him to become the villain. That is the important message of Shay’s story. He is not a bad person, far from it. His instincts are to do good, but he is in a position of privilege living in a world where he is the most important person, everyone praises him, and he is shielded from any knowledge of the consequences of his actions. As the result, he ends up putting Vella’s life, and that of others, at risk.

In real life, unexamined privilege also has its consequences. There are ongoing discussions of lack of representation in games, harassment at conventions, and barriers to employment in traditionally “geeky” industries for anyone who doesn’t fit the white male mold. Trying to fight for equality, against the status quo, can feel like being Vella, fighting the monster that everyone has accepted. (“You want to kill the patriarchy? Why would you want to kill such a noble, endangered creature! Being sacrificed to the patriarchy is such a great honor!”). The Shays of the world continue to wage a battle against what they still view as attacks from an enemy ship in some vague galactic war, but that just makes the fight all the more worth it. 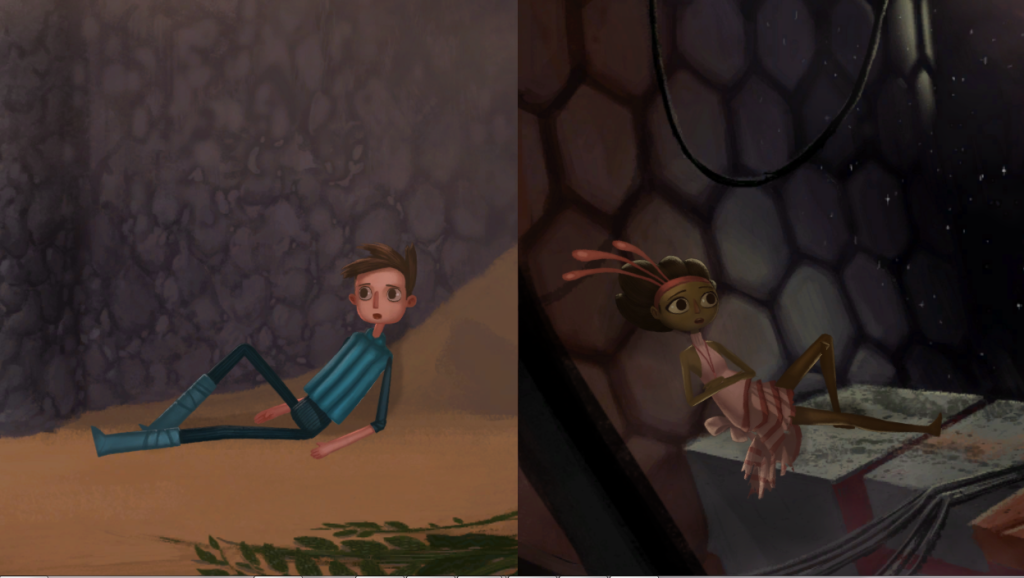 Part 1 of the game ends with the roles of the lead characters reversed and I’m excited to see Part 2, in which Shay will have to confront his privilege, deal with the consequences of his actions, and grow as a person. And Vella can continue being awesome and rescue the other maidens from the perils of their internalized misogyny.

Brenna Asplund is currently working on an English degree and a wealth of personal projects including a sci-fi poetry blog, a game called ACT II coming out in February, and a novel about cheese. Her personal blog can be found here.
View all posts by Brenna Asplund →
This entry was posted in gaming, guest post and tagged Broken Age, Double Fine. Bookmark the permalink.

5 Responses to Broken Age as a Critique of Privilege