I Read a Book: The Fan Fiction Studies Reader

This review written by Keidra Chaney originally appeared on The Learned Fangirl. It is being cross posted here with permission. 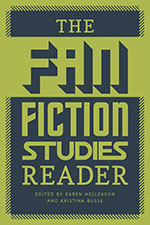 The Fan Fiction Studies Reader, an anthology of influential academic literature in the field of fan studies, is edited by Karen Hellekson and Kristin Busse, the co-editors of the independent academic journal Transformative Works and Cultures, from the Organization of Transformative Works, which promotes the academic study of fan culture and fan works.

For those already familiar with the academic study of participatory fan culture, many of the selections here will be familiar: Henry Jenkins’ landmark Textual Poachers, a chapter of Camille Bacon-Smith’s book Enterprising Women, Francesca Coppa’s Writing Bodies in Space: Media Fan Fiction as Theoretical Performance. The reader is split into several components: “Fan Fiction as Literature” covers much of the same ground as Fic: Why Fanfiction Is Taking Over the World (previously reviewed here); gender and sexuality within fandom is approached in the “Fan Fiction and Feminism” section, the social dynamics of fan communities is explored in the “Fan Communities and Affect” section. the performative aspects of fan creation are tackled in the “Fan Creativity and Performance” section.

There’s some notable omissions, however. Specifically, the importance of anime and manga fandom and fanworks and its collective impact on fan communities. The editors acknowledge that the reader is selective in its focus:

“We have […] chosen to restrict our collection to transformative written works of Western media texts in order to provide a cogent history of one particular strand of fan studies research that has been prolific and influential to both fan and media studies.”

While I understand that one anthology can’t cover everything, it’s hard to overstate the impact of anime and manga on Western fan communities and particularly pre-social media online culture. It’s the entry point to fan culture for many, particularly those who came of age online. To not have that element of fandom explored seems quite shortsighted for an anthology meant to build a theoretical foundation for fan studies, but perhaps an anthology that focuses on global fan communities is the next step to address this. Additionally, I have also noticed generally a lack of academic writing on race, ethnicity, and fan-writing communities, but I suspect this may be connected more so to the medium; more visual fan works like fan-art and cosplay have explored issues of race-bending and representation more explicitly. Still, there’s way more to explore here, and I would love to see a book on fan studies that integrates globalization, culture and race issues into its narrative, rather than siloing these issues off.

Henry Jenkins’ Textual Poachers is now 22 years old, meaning academic study of fandom as a concept is now well past its infancy. Mass media has certainly changed quite a bit has changed in that time,and what it means to participate within fandom and to study fandom has changed as well. Fan studies, while not exactly widespread in academic circles, is much more accepted as a discipline and field of study, even as pop culture studies remains the Rodney Dangerfield of critical studies. Even 2004 seems worlds away in the short but eventful history of fan studies; this was a time before social media made it possible for fans to collectively dissect television shows in real-time before the widespread popularity of blogging, memes, and viral content online normalized the concept of audiences as media producers; before fanfic-writers turned pro like Cassandra Clare and E.L. James brought a certain level of acceptance (if not respectability) to the idea of fanfiction as a jumping-off point for original fiction; an age where the idea of media owners courting fan activity rather than suppressing it seemed preposterous – and quite notably before geek fandom (sci-fi, fantasy, comics) evolved from subculture to the mainstream. Much of this early fandom/online cultural history is in danger of being erased in broader discussions of online culture and community, either intentionally and unintentionally by corporate media owners and brands, or by pop culture critic and writers who may not be aware of that this history even exists.

The Fan Fiction Studies Reader is valuable in a number of ways, as a foundational text within classrooms teaching fan studies or media studies, for academics planning to build upon the previous thinking within the multidisciplinary study of fandom, and as a historical document of fan culture for critics and journalists that write about such issues.

This entry was posted in academia, books, cross posts. Bookmark the permalink.

1 Response to I Read a Book: The Fan Fiction Studies Reader