This guest post is written by Sylvia, a student teacher by day, an aspiring nerd critic by night. She can be found on Tumblr.

Korra couldn’t have less in common with Aang, the previous Avatar. A 17-year-old girl from the Southern Water Tribe, she is as hot-headed and eager as she is talented. When she runs away to Republic City, her stubbornness and impatience get in the way of her bending studies, but it is clear from the start that she is destined for greatness. – Korra’s character profile 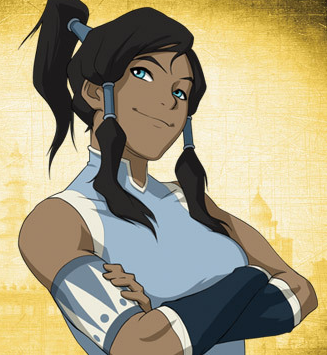 Since I witnessed the unspeakable disaster that was The Last Airbender movie, I had been waiting restlessly for the reveal of the new Avatar. I needed something great and wonderful to wash away the memories of M. Night Shyamalan’s wooden dialogue and befuddling plot; something that captured the originality and cleverness and, above all, the heart of the original series, Avatar: The Last Airbender (TLA). Fortunately, Korra burst onto the screen in the premiere episode of Avatar: The Legend of Korra (LoK), eager and ready to deliver everything that a fan could hope for.

Like Aang, the previous Avatar, Korra is tasked with the incredible responsibility of maintaining balance in her world at an early age, and she also has to carry the weight of the series on her shoulders. She takes on both roles with zeal, her enthusiasm replacing the charm of Aang as the main draw for viewer’s sympathy. When Korra kicks her way into her house and screams, “I’m the Avatar and you have to deal with it!” she is basically kicking her way into our hearts. (She kicked her way into mine!) Korra might be a “reckless teenager” but her character is wrapped up in good intentions.

Beyond being a likeable character, it’s refreshing to see a young woman with muscles and brown skin as the lead protagonist. It’s unfortunately still rare to see a female character following the steps of the monomyth, the plot structure that serves as the skeleton for so many fantasy/adventure stories. In most cases, the hero is a young man who discovers the world and the true limits of his character (e.g. Luke Skywalker), with women only stepping in as plot devices to help on his journey (e.g. Trinity in The Matrix or Galadriel in The Lord of the Rings). But here we have Korra, running away from the safety of her home, gathering a group of sidekicks and wise tutors, to fight through the challenges before her. There are hints that Korra may become distracted by romance, but I have hope that she will spend her nights gazing at the pro-bending arena, because it holds the promise of future glory, instead of a certain black-haired, brooding boy. We still have a lot to learn about Korra, and I’m excited to see her personality unfold beyond the feisty teen structure, just as Aang grew from the fun kid to someone deep and wise. 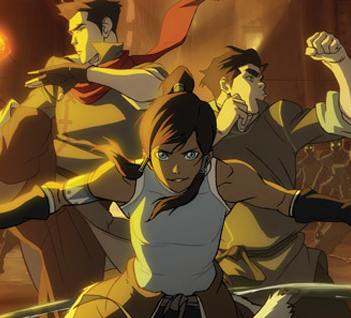 It’s easy to spend the beginning of LoK comparing and contrasting Korra and Aang; the show practically begs the viewer to do so, from the promotional materials of the show’s website to the plot of the premiere episodes. The differences become obvious in the second episode (“A Leaf in the Wind”), during Korra’s training with Tenzin on the Airbending obstacle course. In his series, Aang was a dedicated pacifist; when he could not avoid dangerous situations or make friends out of his enemies, he would often soar out of reach, frustrating his enemy. It was a value he held onto so strongly that it became the ultimate weapon in the battle with Fire Lord in the series finale. On the other hand, Korra rushes into battle with the thugs in Republic City; she eagerly joins the pro-bending team; she destroys the Airbending exercise with a fiery burst of energy.

An even more interesting comparison would be between Korra and Katara, Aang’s crush in TLA and his widow in LoK. Both Korra and Katara are Waterbenders from the Southern Water Tribe, young girls with great strength and values. We first see Katara use her powers during a frustrated tirade, yelling at her brother. When she first realizes she’s waterbending, she looks amazed to see her strength. Eventually, Katara grows to be a masterful Waterbender, talented enough to train two generations of Avatar, but she runs the risk of being known as Aang’s love before anything else. Korra might see an echo of herself in Katara – there are certainly hints of the brash young Sokka, Katara’s brother, to be found – and who she could have been if things were only slightly different. Maybe that’s why Katara is the only tutor to support Korra’s decision to leave the safety of her training grounds.

It should be interesting to see how the rest of the season shakes out. Like Aang, Korra is steadily building her circle and her personality in these earliest episodes, preparing for the tests to come. My only concern is that she may be venturing into the familiar “lone she-wolf” territory. It’s one rare thing to have a dynamic female protagonist, but it’s apparently another for her to have a female friend. So far, we’ve seen female children (Tenzin’s children, Jinora and Ikki) too young to support Korra as equals, mother-figures (Tenzin’s wife, Pema, Lin Beifong, and Katara), and a romantic rival (Asami). I hope that there will be characters like Azula, Mai, and Ty Lee, the strong female friends that were featured heartily in TLA, although this time without so much drama.

The world surrounding Korra is also quite different. Where Aang travelled through developing agrarian societies scattered across the world, surrounded by war, Korra will have her adventures in the middle of a bustling city, filled with an uneasy peace. Aang was a hero but shied away from that role to an extreme, while Korra would like nothing more than to be the glorious Avatar.

If Avatar: The Last Airbender was a story of friendship in the midst of total war, Avatar: The Legend of Korra looks like it will be a story of identity in a rapidly changing society.

I can’t wait to see how she deals with it.

Sylvia is a student teacher by day and an aspiring nerd critic by night. She can be found on Tumblr.
View all posts by Sylvia →
This entry was posted in guest post, television and tagged the legend of korra. Bookmark the permalink.