This is going to be a post about Race in Fantasy media.

I just wanted to get that out there, right off the bat, so we’re clear.

If you would like to get yourself a glass of wine, maybe a hot chocolate, and open your browser to a Wikipedia tab, I’ll wait.

I’ve been inundated with various questions, reasons, and exclamations on the topic of race and race relations in fantasy media. Mostly by people who – in my humble opinion – forgot to check themselves, and subsequently got wrecked.

I thought I would answer some of the most burning questions here. So buckle in, Marty, because we’re about to go back to the past.

“The author clearly intended for all of these characters to be white, based on the traditional mythology of the land”

Well, dust my buttons. Not unlike fictional characters, deities are intangible; they are also not human, and thus not at all bound to look like any one of us. Of course, you wouldn’t believe that if you consider classical depictions, like ancient sculptures and mosaics, a source. Keep in mind that most of classical canonical works in Rome and Greece were built on commission from the ruling class, that class mostly being White. Ergo, most of the depictions of legendary persons/deities, regardless of ethnography, were also as White.

Consider the following: as more and more scholarly research is conducted, it is being found that Roman based Madonna worship was actually founded on the assimilation of the Egyptian worship of the goddess Isis. Many Renaissance images of Mary with child harken back to Egyptian representations of Isis and her infant son, Horus. This may also be why Pre-Renaissance depictions of the Madonna sport dark pigmented skin.

Let’s also consider historical people of legend. Jesus, who is believed by many to have been very real and very human, was from a very specifically documented part of the world. Those of the class Jesus was purported to belong to (working class) had a very specific ethnic background, and it was certainly not John Tesh, or whoever that blonde Jesus is supposed to be hanging out in chapels across America. I mean, come on, folks, no one ever argues about Mohammed’s ethnicity. 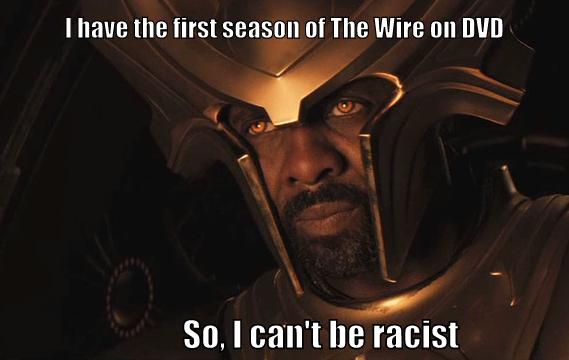 Sixth and lastly, there is this thing called “whitewashing”. Unfortunately, a lot of our Western forebears were what we’d call racist imperialists. That means you, me, and everyone we know have to work extra hard to set right all that has been set wrong, protecting and keeping intact as many as possible pieces of cultures they tried to destroy.

Idris Elba (and his beautiful, perfect face) didn’t get cast as Heimdall just to come after your Greek, Roman, English, and Norse mythologies; those aren’t going anywhere, so don’t you go foaming at the mouth with worry.  Besides, Fake Made Up Person I’m Addressing, there have been Black people in Scandanavia for as long as there have been Black people AND Scandanavia. And no, that doesn’t mean you can go and do a retelling of the Anansi tales with White people.

I know the Moors existed, I have seen ‘Black Knight’, but there weren’t any POC [People Of Color] in NORTHERN Europe during Hobbit Wizard Dragon times.

What did I just say?

If you read further,  you’ll get even more of a taste of how far and wide the African presence in Europe reached. There is also a vast amount of work written on the African presence in Europe during the Renaissance . The same goes for the Asian presence in Europe over time. Granted, part of this is just logic: the three continents are not very far apart, they all had advanced means of transport and resources, and if the Vikings can do it why not everyone else? Moors, Ottomans, and the spice trade didn’t just drop out of the sky one day – there had to be a foundation for all of their influences. We’re talking about real life, not The Sims Medieval Party Play Expansion Pack 5.

And let’s also remember, we’re talking about Hobbits, wizards, dragons, and magic. If we can suspend disbelief for that, I think we should be able to accept something that actually has some factual context.

Ok, fine Moxie, People Of Color were all over Europe during these times, but they COULDN’T have been part of a privileged class because RACISM.

Don’t mind him, he’s just super busy changing the artistic and religious scope of the Western world, no biggie. 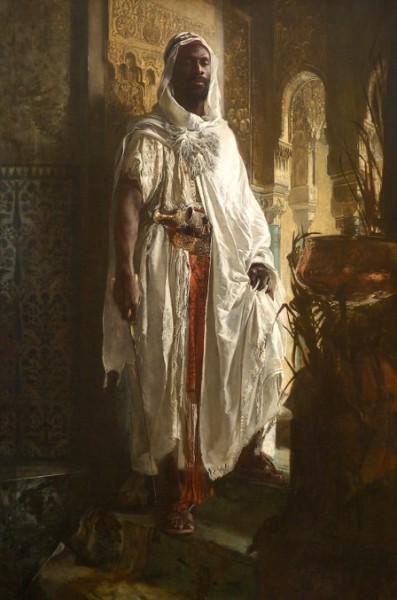 False. The world is very old. Race, as it is seen now, (and the class issues that come with it) is a relatively modern concept. Inter- and intra-racial relations more than likely weren’t viewed the way we see them today. In fact, it is very possible that in ancient history there were times when race was not a sociopolitical issue at all. The Moors of Iberia, of course, are the most popular example. Moors did not signify a particular ethnic group; they were a diverse mix of Black Africans and Arabs, most of whom for several centuries made up the upper class of what are now Spain and Portugal. There is also scholarly evidence of and African presence among the papal line.

So no, Fake Made Up Person, having a POC at the round table, or even as queen, is actually more envelope-pushing now than it would have been when it actually happened.

Well, aren’t you going to say something about POC who actually are depicted in Fantasy media? 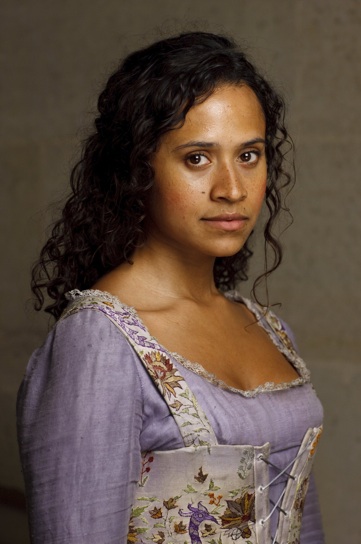 Granted, she's treated like a plot device and not an actual character. But, baby steps, I guess.

This post could be longer, but I’ve grown tired of discussing examples of ‘mysterious tradesmen from The Orient’, ‘tricksy street smart magicians from The Southern Continent’, slaves, and muscle men with swarthy skin who know nothing but how to rape murder and pillage. It’s boring, it’s false, and it’s been done.

Any more questions? Throw them in the comments.

Oh, and here’s a JSTOR style reading list in case you think I made all this up:

This entry was posted in fantasy, race and tagged fantasy, history, race. Bookmark the permalink.

5 Responses to United Colors Of Albion: Race In Fantasy Media