It’s a safe bet that most, if not all of us, will change throughout our lives. We’ll look back on past mistakes or rash decisions, sometimes with regret, but hopefully with the knowledge that we’ve learned something over the years. Each passing year presents the opportunity to try new things, find unique and different ways of solving our problems, build new friendships.

For some people, change and growth can be difficult. It can be especially hard if you’re someone who’s gone through life hardened by wrathful anger and a thirst for power. It’s doubly hard if you’re an alien warrior with a skull for a face, with a mission of conquest so grandiose, you might not even remember how you started on it in the first place. Skeletor is such a man, and for years his life’s purpose has been to possess the most powerful secrets on all of planet Eternia by means of conquering Castle Grayskull, and thus allowing him to rule over all. On his relentless quest, Skeletor constantly found himself at odds with those who’d wish to stop him, chiefly the warrior He-Man. Sounds exhausting. 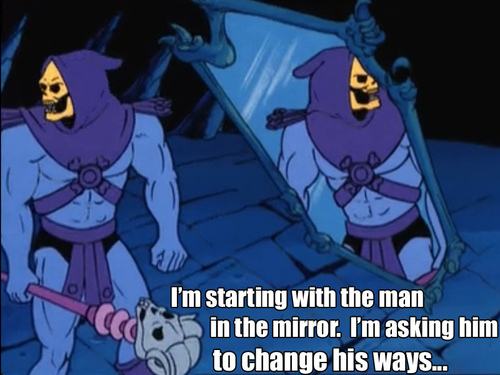 Over the past year, however, word has been circulating that Skeletor is on a different sort of quest altogether: the quest to be a better man. He has been documenting his self-actualization on Tumblr (where else!) and has developed quite a growing community of followers joining him on this journey of self-discovery. Yesterday, I had the opportunity to catch up with Skeletor and his personal assistant via e-mail, to find out a little bit more about his journey. Perhaps we can all learn a little bit from him.

Skeletor, where did you get the idea to share your daily affirmations?
This came about late last summer, maybe August-ish 2012? I stumbled upon the Masters of the Universe live action movie in its entirety(!) on YouTube. After watching for a bit, and seeing Frank Langella’s mopey portrayal of the dark lord Skeletor, I thought, “Man! This guy looks absolutely miserable. Is this how people see me? Where did it all go wrong?”

It occurred to me that things might have gone very differently for me if in my youth I’d gotten a bit more encouragement, or perhaps some kind words of support. Maybe I would have chosen a different path than that of evil? Is it too late to change? Can I be… good?

I began to examine my motives, behavior and habits and realized I was a profoundly sad and empty individual. I thought myself in need of some healing. It occurred to me that perhaps I could document my journey to positive mental health in a public way, so that others with similar problems could share in the journey and perhaps do some healing of their own. More on that later. 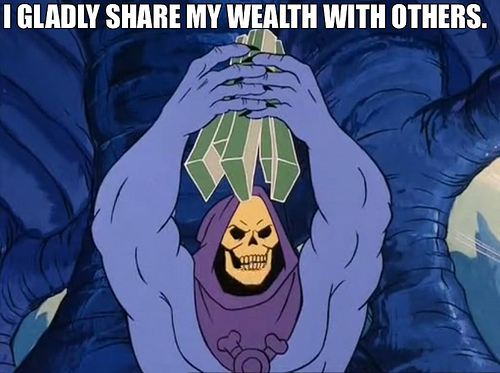 Do you feel you are a kinder, gentler Skeletor these days? Or, more importantly, have you noticed change in yourself over the years?

The old Skeletor was terribly unkind and hurtful toward his minions, ruthless in his plotting against He-Man & co. and bloodthirsty in his megalomaniacal quest for domination as ruler of Eternia. The plus side to these attributes? He is obviously a driven, persistent individual. He’s got a can-do attitude and the tenacity to see a plan (no matter how flawed) through to the bitter end. He has focused these qualities in a more positive manner of late with Skeletor is Love, and I believe it’s paying off. It’s incredibly gratifying to receive a note from a stranger who says that their day was a little better because of Skeletor. To know that because of something you said, or did, someone’s life sucks a tiny bit less. It’s all about helping people. I direct these impressive energies now to the task of helping folks. Not hurting them. I think I’m a little more at peace now. 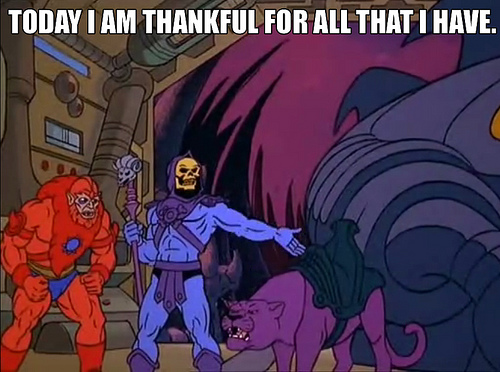 What is a common misconception about you that you hope people will set aside?
I’d like to disabuse people of the notion that I always speak in The Voice. You know the one. You hear it in your head now, don’t you? Medicine has come a long way and there have been great advances in vocal cord replacement and related therapies. I actually possess a lovely baritone. I could sing tender lullabies to your pets and babies.

Who are some people you admire and turn to for inspiration?
That’s certainly a mixed bag! In the past I do think that would be a very different sort of answer. Let’s not get into that, no point in looking backward as we progress, after all! Now, though, I look to the likes of Mother Theresa for inspiration; I believe she said something along the lines of “Let no one ever come to you without leaving better and happier,” and I think that is a very noble thing to which one should aspire.

I also have a great fondness for Carl Sagan, a “perpetual observer of the human condition” and the greatest spokesperson for science the world has ever had. I am a great believer in rational thought and find myself always questioning, always curious. I have come to believe kindness and curiosity are two of the most important attributes an individual can share with the world, and on my part I do my very best to contribute every day. 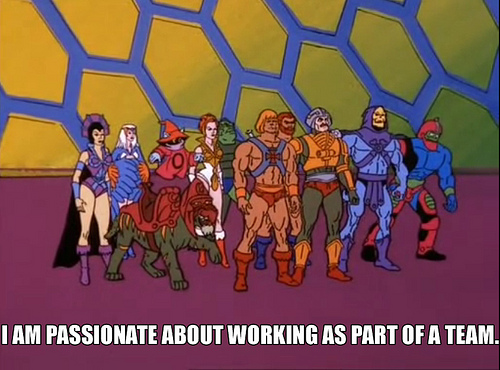 Who helps you with all the important work that you do?
Skeletor: This is obviously a labor of love and it certainly would not be possible without the daily assistance of S. Elizabeth. In fact, I’ll turn the floor over to her for a moment.

S. Elizabeth: I too had seen a bit of Frank Langella’s portrayal of our favorite necrotic evil overlord and had similar thoughts! What a miserable wretch, what is wrong with this guy?! In a heartfelt conversation Skeletor later confessed to me his shame at watching that, his deep sense of unhappiness and his desire to change and help others along the way. I thought about my sister, a mental health counselor, and all of her self help books from “positive affirmation gurus” such as Louise L. Hay, Eckhart Tolle and the like, and…Eureka! An idea was born. Wouldn’t it be both inspirational and kind of hilarious if we were to pair scenes from Skeletor’s past life of villainy alongside these positive declarations? 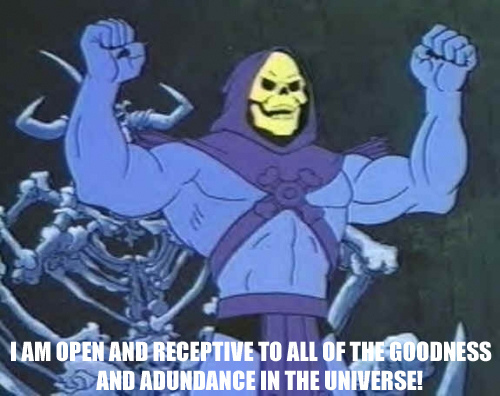 I wanted to both help a friend and give my sister a quick laugh, because hey, improving yourself is tough, working with the mental health community is HARD WORK. Maintaining a positive attitude throughout the process is challenging if not downright impossible sometimes. It’s a cliche for sure, but it is true – sometimes all you can do is laugh.

Skeletor, do you and S. Elizabeth have a special message you would like to share with our readers?
Absolutely! I love the spirit of thoughtful discussion that Geekquality embodies. The hope that everyone can have their voices heard in a respectful manner is one that is near to my heart and very important to me as well, something I try to communicate to my fans at every opportunity. 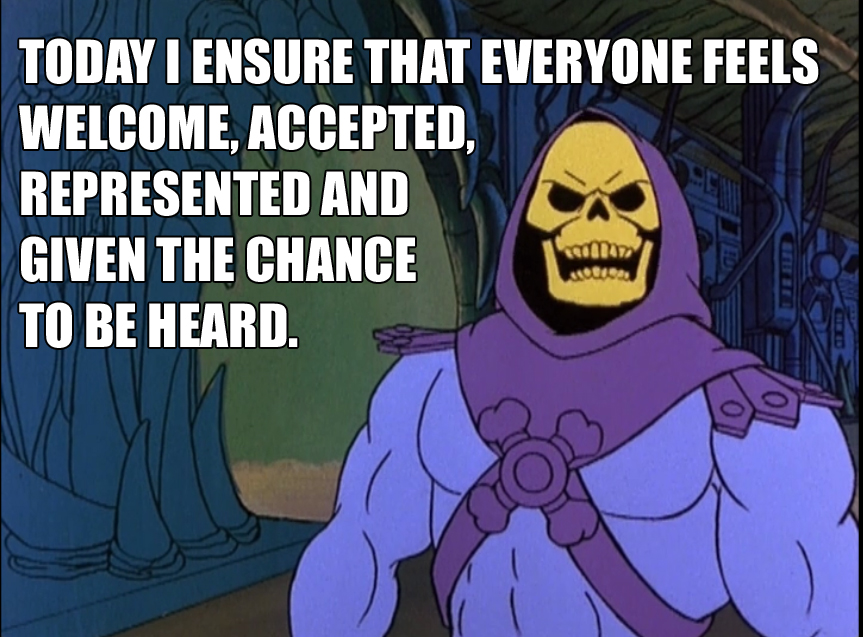 Thank you, Skeletor and team!

This entry was posted in interview and tagged Heal Yourself Skeletor, positive thinking, S. Elizabeth, self improvement, Skeletor, Skeletor is Love. Bookmark the permalink.

6 Responses to A Kinder, Gentler Skeletor