Ultimate Aunt May: Answering “The Toughest Comics Question Ever”

Last Thursday Gail Simone asked what she called “The Toughest Comics Question Ever” on her Tumblr:

For International Women’s Day, I am asking everyone to name their ONE favorite female-identifying character each for DC or Marvel. This is your all-time favorite from each publisher, and no cheating is allowed.

Who do you choose?

Now, immediately I think, “Eh, that’s not so tough. For DC, it’s Kate Kane/Batwoman, obviously.” Anyone reading Geekquality (I hope) is already a fan of Greg Rucka and J.H. Williams III’s re-imagining of this Silver-Age member of the Bat-family. I mean, she’s so badass that she not only survived into the New 52, she did it without being rebooted! Her series just picks up where it had left off, regardless of the fact that the rest of the universe collapsed and restarted from square one. 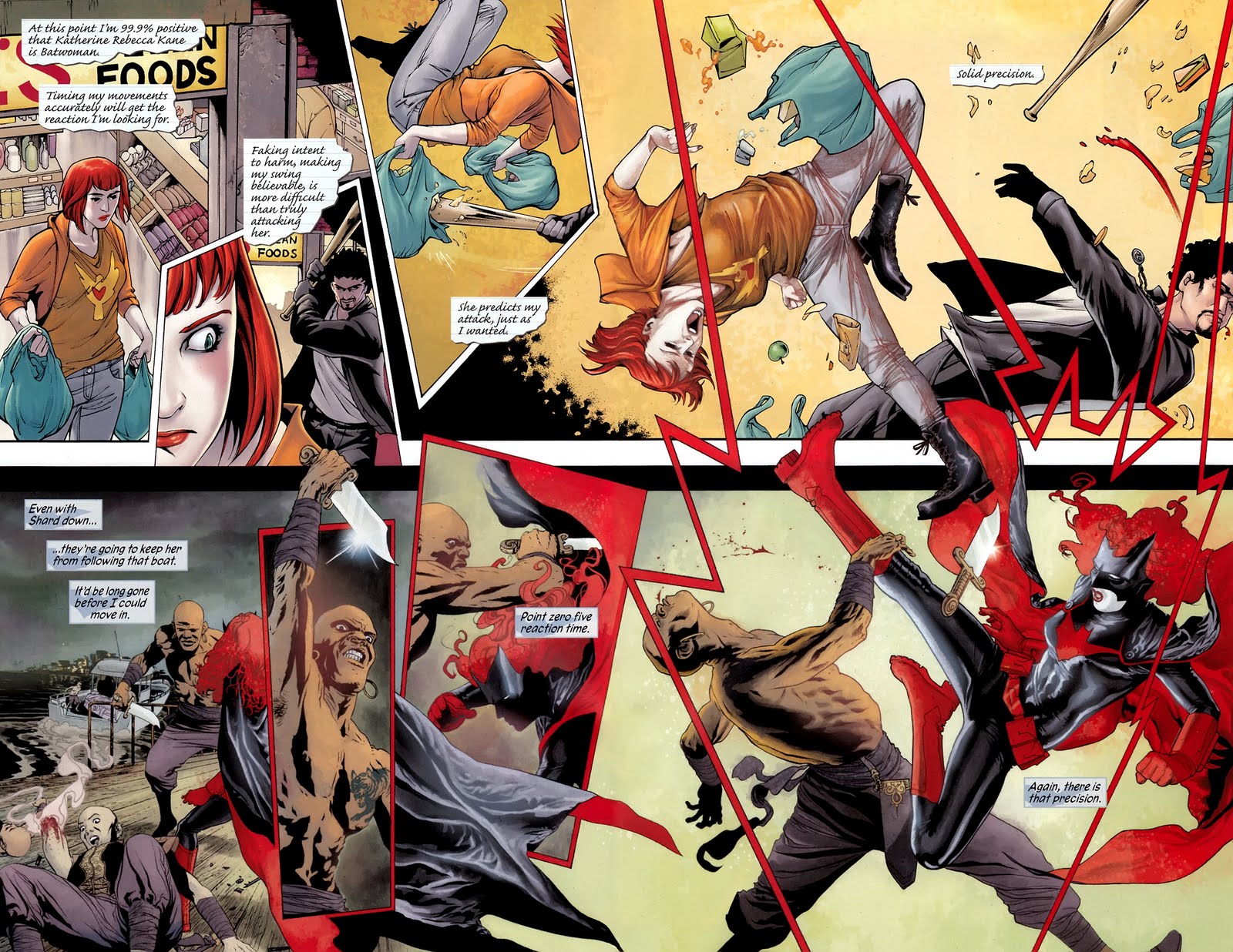 When I got to the second part of the question – favorite female Marvel character of all time – I just drew a blank. So many great women to choose from: Storm, Kitty Pryde, Black Widow, Spider-Woman, Jessica Jones, Emma Frost, Maria Hill, Pepper Potts, She Hulk (Green and Red varieties), Hawkeye (Kate Bishop), half the cast of Runaways.

But when I asked myself which one was really my favorite – the one that sticks with me the most – I realized that there was really only one choice.

You think I’m kidding, don’t you?

I mean, it’s Aunt May, right? Peter Parker’s elderly, sickly aunt who Stan Lee assured us would die of shock if she found out that Peter was Spider-Man? The one with the Lhasa Apso and the world-famous wheat cakes? Yes, that Aunt May, but also not quite.

You’re thinking of the original Aunt May (herself a much tougher cookie than folks assume), who first appeared in Amazing Fantasy #15, way back in 1962. The Aunt May I’m referring to is May Parker of Universe-1610, otherwise known as the Ultimate Marvel Universe.

Without getting into too much detail, back in 2000 Marvel launched a side project that allowed for new, younger takes on their marquee characters in a more modern setting, unburdened by forty years of continuity, but without (unlike a lot of DC’s efforts) undoing the characters readers know and love. Those characters were still safe in Universe 616 (the “main” Marvel U).

One of the very first story lines launched for this new universe was “Ultimate” Spider-Man, bringing us a Peter who was just starting both high school and his superhero career.  With this new, younger Peter came a new, younger May Parker.

This was a very different Aunt May: one who had been young in the 1960’s and 1970’s, having run away to San Francisco while she was in her teens, where she lived as a hippie, proposed to Jimi Hendrix at a concert, and was by all accounts more than a bit of a wild child. In fact, it wasn’t until some time in her thirties, with the death of Peter’s parents, that she settled down and started acting the part of an adult. The original Uncle Ben and Aunt May adopted Peter in part because they couldn’t have children. In the Ultimate Universe, it was more like May couldn’t be bothered with children until Peter needed her.

Ultimate May Parker is a headstrong, forthright woman shaped by loss. When she lost her sister Mary, she suddenly found herself transformed into a mother to a sad, smart little boy. She lost her husband Ben and had to become a provider and single parent. All the while, she is haunted by the very real fear that she will outlive everyone she loves – she loses not only Mary and Ben, but also would-be boyfriend John Stacey, and his daughter Gwen, whom she’d taken in after John’s death.

It was always Peter, however, that she held onto the most fiercely. Motivated by the fear that she might lose him, this seemingly powerless woman went to great lengths to protect possibly the greatest hero of the Ultimate Universe, and that is what really makes Ultimate Aunt May so special.

When J. Jonah Jameson fired Peter from his job at the Bugle, May went after him like a pit bull, demanding her nephew’s job back – with a raise – and she got it; when taken into protective custody by S.H.I.E.L.D., she stared down Nick Fury; and when she finally learned about Peter’s secret identity, she single-handedly set to dealing with his PR problem.

And that’s Aunt May on a good day. The reason that she had so many HELL YES moments over the past twelve years is that she, like Peter, is incapable of backing down or letting an injustice be done.  Much like Peter, when she tried to turn her back on her duty, she was rewarded with guilt and anxiety. 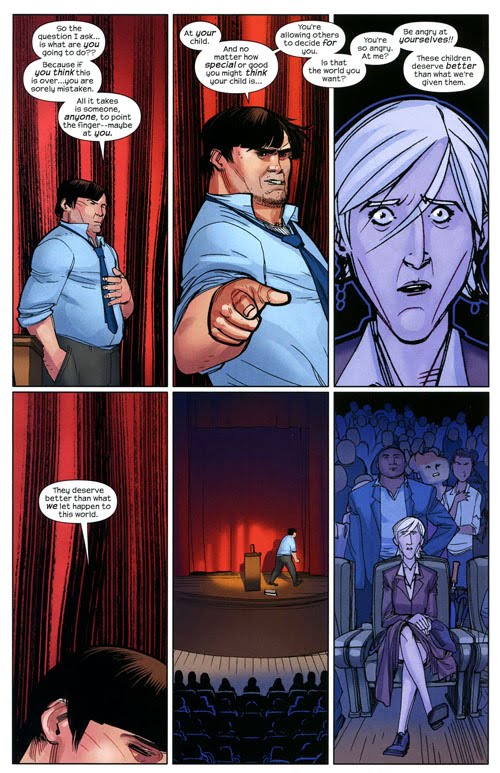 So, the only thing that she could do – the only role that came to her naturally – was to be a protector.

It’s because of this that she essentially became a mother figure to half the young Ultimate Universe. In the aftermath of the Ultimatum event (which saw New York destroyed and briefly believing that Spider-Man had died), May took in not just a resurrected Gwen, but also Johnny Storm (the Human Torch) and Bobby Drake (Iceman), while moving heaven and earth to help Mary Jane Watson, Kitty Pryde and Richard Ryder (Nova) in any way she could. Aunt May was extremely uncomfortable with superheroics. Before she’d learned Spider-Man’s true identity, she felt that the madness in Queens surrounding him was just another symptom of her world falling into chaos. (She’d already lost Ben and Peter began distancing himself). Even after finding out the truth about Peter, she was never comfortable with the risks that he, or any of the other kids she cared for, took. Nonetheless, she supported what Peter did because she understood what drove him.

So, when Aunt May started picking up strays, she did her best to instill in them the need to take action in order to fight for the people and things worth protecting. In a way, she became a sort of Professor X to the young heroes she took under her wing – teaching them all that their powers entail, with an obligation to use them for the greater good. 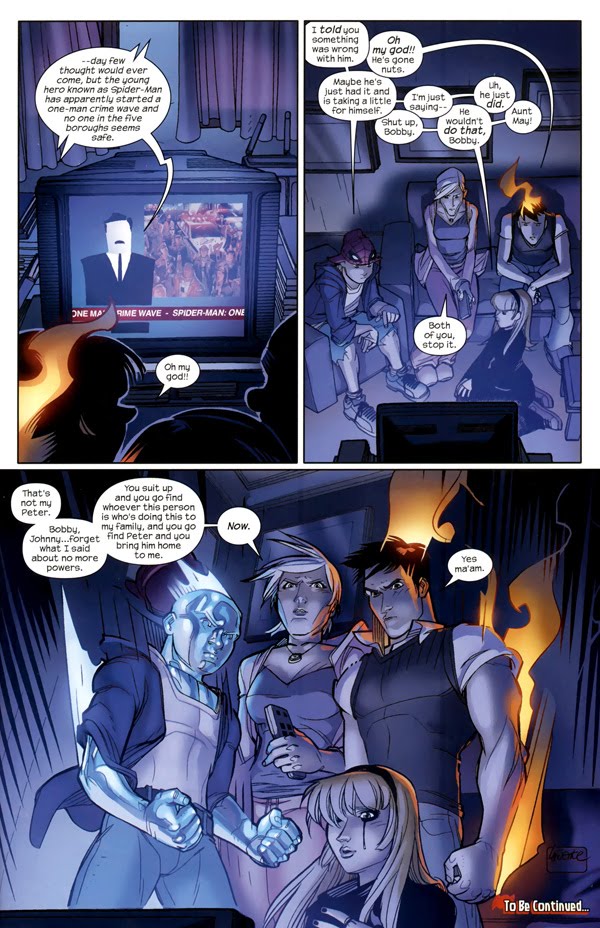 The tragedy is that the whole time May knew what Peter would discover in the end: that great responsibility often entails great sacrifice. May gave up her free-wheeling ways to become a mother to her orphaned nephew; she gave up her home to children who needed her; ultimately, she gave up the boy who had become her son to a world that needed saving.

Just as he eventually sacrificed himself to save her.

Peter Parker’s death was not the end of May’s story, however. His death hurt her deeply; it almost broke her. Yet, she did not let herself forget that her boy was a hero. He did what he had to, even when the entire world was against him, believing that doing the right thing matters, regardless of how hard it might be.

That’s Captain American she’s slapping, by the way. The wound that killed Peter was caused by a bullet meant for Cap. This was even after the Ultimates (the Universe 1610 version of the Avengers) had spent months trying to shut Spider-Man down.

When I said that Spider-Man was possibly the greatest hero in the Ultimate Universe, it wasn’t because he was the strongest, or the most respected, or the most powerful. It was because he did what he did with no reservations, despite finding himself alone, feared, and distrusted; despite often being outmatched by the threats he confronted; despite being, really, just a frightened child.

After Peter’s death, a new Spider-Man takes up the mantle. Miles Morales finds himself in much the same situation as Peter did in the beginning. He doesn’t understand his powers, and he’s alone in his efforts, driven by the death of someone he could have saved. In addition to all this, in the eyes of many – including Aunt May – he is usurping a heroic legacy. Having learned that there’s a new Spider-Man, she’s about to return to New York City, this time in order to protect not Peter himself, but his memory.

God help Miles for calling down the wrath of May Parker.

When I said that Ultimate Aunt May is my favorite female Marvel character, it’s because she is, in a way, a reflection of Spider-Man himself.

The words, “With great power comes great responsibility,” may have come from Ben, as Gwen tells it, but Aunt May has always lived them.

This entry was posted in comic books and tagged aunt may, marvel, spider man, ultimate aunt may, ultimate spider man. Bookmark the permalink.