It’s a short and sweet week this time around, as the new offerings in the #1 department are few in number. There are a few first issues from the big boys mostly, with one exception, and a prequel that may answer the most pressing questions in all of geekdom! 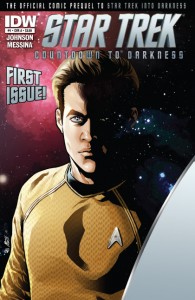 That prequel is IDW Comics Official Precursor to this summer JJ Abrahms Star Trek Blockbuster, Star Trek: Countdown to Darkness #1. Co written by screenwriter Robert Orci, the book begins with a disturbed Spock having trouble sleeping, not to mention a few mommy issues. It’s exciting to see the Enterprise crew acting like a crew and not randomly finding themselves and each other, as we did with the first Star Trek film. It is, though, off-putting that artist David Messina, while talented, didn’t put much effort into making the characters resemble their real world counterparts.  Kirk looks more like a young William Shatner than Chris Pine, and Spock looks like … no one. That said, there’s exciting Star Trek action, Kirk actually deigns to let Uhura take the conn (for once), and a mysterious villain is revealed. Is it the mysterious unknown Benedict Cummerbatch character? It’s certainly not Khan, I can tell you that, and it’s set up to be a villain just for the comic series, but one can never tell.  At least, not without reading the book… 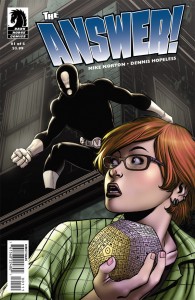 Dark Horse Comics gives delivers this week’s indie publisher #1 with The Answer #1. It’s a fun book, since the Answer – a mysterious superhero with a giant exclamation mark on his hooded face – isn’t really the main character. The book is narrated by the woman the “hero” spends so much time trying to save, a vivacious young librarian with a thirst for math and word puzzles, named Devin McKenzie. Ms. McKenzie is a geek after our own hearts who excels at Jeopardy and doesn’t particularly WANT to be saved by any sort of masked vigilante. She’s more preoccupied with understanding how the hyper advanced Rubik’s Cube style puzzle she just solved, the first thoughtful birthday gift her mother ever have her, somehow alerted several armed assassins that they needed to kill her. It’s a mystery for certain, and one with a good hook and an intelligent, no nonsense female lead that’s worth following for a few more issues. Devin also earns solid nerd points for having a coffee mug that reads “Librarians Do It By The Book.” 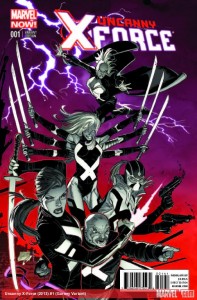 The rest of this week’s #1’s run in, and strangely OUT of, the mainstream Marvel Universe. The first is Uncanny X-Force #1, a reboot of the popular X-men black-ops team, this time headed up by a newly divorced Storm. She’s carrying some anger issues and has reverted to her Mohawk, with striking results. Storm has teamed up with X-Force stalwart Psylocke, the telepath-turned-ninja Betsy Braddock who insists on being called Elizabeth, even if her creators at Marvel aren’t listening. They are joined by Alpha Flight (the Canadian X-Men’s Puck), a dwarf with unusual physical skills; long time many armed X-Villainess Spiral; and the female version of the three-brained thief known as Phantomex, who’s apparently three full people now and carrying on a relationship with … herself? This highly confusing #1 is just another case of a new jumping off point for a previous series, with a lot of backstory that’s left unexplained. However, any super team that includes four powerful women is bread and butter for those of us looking for more positive representations in the world of comics. In fact, there aren’t many tougher ladies than Storm and Psylocke in the X-titles, and it’s especially refreshing to see them treated with respect as leaders, as well as women dealing with real world problems on top of the super hero ones. (The return of Ororro’s power hairdo is also fun for those of us who remember it from the ‘80s.) 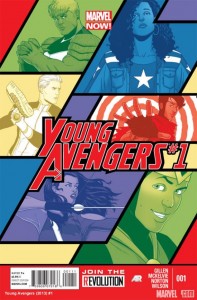 There’s some pretty outstanding character diversity happening in Marvel’s Young Avengers #1 as well this week. YA is another reboot series, with an all new-ish lineup, a team that isn’t quite yet a team. Included among its soon to be members are the female Hawkeye (who’s not a female rip off or sidekick, but shares the moniker with Clint Barton’s blessing); Hulkling, the shape changer, and Wiccan (son to the Scarlet Witch), two young men who make a charming couple dealing with teenage love and super heroism all at once; and a female Captain America, woefully named Miss America but by being Latina representing a more realistic population of our country. They don’t do much in the first issue except end up in the same place at the same time, and again there’s a lot of backstory here that’s unexplained and understandable only if you are a heavy Avengers reader, but it’s good to see Marvel moving past some of the old obvious stereotypes and giving us some home human characters, even in the super human community. 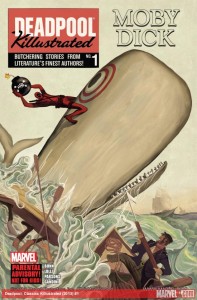 And then Marvel gives up on continuity all together (to hysterical effect) in Deadpool Killustrated #1. This is also a reboot of sorts, following on the heels of the Deadpool kills the Marvel Universe miniseries of recent months. Deadpool has always been unique within the Marvel Universe for his breaking of the 4th wall, but he’s gone overboard now. His self-realization – which led to the wholesale slaughter of all of Marvel’s heroes in the previous story – has driven him even further into madness. Deadpool rounds up the few genius criminals he left standing to try and break out of the fictional reality he lives in, and into that of “The Classics.” If Deadpool can kill Spider-Man because he knows that Spidey is just a fictional construct, then why not go after Don Quixote or even Moby Dick? Written with the trademark deadpan humor of the “Merc with a Mouth”, Deadpool Killustrated is the most meta of commentary on the concept of comics, and even fiction as a whole, using ridiculous violence to remind us all to get over ourselves for a few minutes. Some might call it an assault on valuable literature, and they might be right, but it’s great fun nonetheless.