The Betrayal of Women in Bedevilled 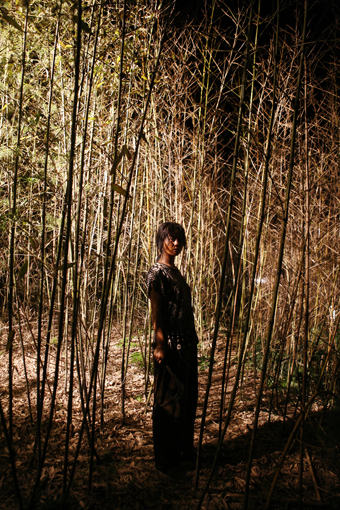 Before I start, you need to know this about Bedevilled, aside from massive trigger warnings of violence, sexual assault, betrayal (you name it): this movie is a gutwrencher. The first half of the movie sets the stage with cruel and unjust situations that will leave you cringing and sad, and the film has no qualms in taking its sweet time building up to the denouement.

At the center of Bedevilled are two women, Hae Won and Bok Nam, who used to know each other as children, but have since drifted apart in drastically different directions. One is a heinous excuse of a human being, and the other is an abused shell of a person, broken but desperately holding onto life and fighting for any chance she can take. But let’s back up a bit to lay out the premise and look at why it’s such an agonizing movie, despite some very satisfying comeuppance served on the curved end of a scythe. (Obviously, contains plot summary and spoilers).

Bedevilled opens with a rather disturbing sequence that, while not terribly graphic (compared to the rest of the movie), is frightening just the same. An unknown POV watches through a car window as two men – who’d been aggressively “flirting” with a young woman – begin beating her in the middle of the street. People literally walk around this violent exchange as the girl tries to flee. Opening credits begin after the girl runs up to the window and pleads for the passenger to save her, only to have the window rolled up in her face. One of the men grabs this unknown victim by the hair and drags her off, to who knows what (except women always know in their guts).

The opening, while not the story of the film, sets the mood and prepares the viewer for the misogynistic mindset and violence throughout the rest of the film. Bedevilled is a movie about violence against women and the lengths people, especially other women, may go to ignore or help perpetuate it.

The protagonist – a stretch of a term for this highly unpleasant main character – is Hae Won. The viewer’s dislike of Hae Won is cemented within the minutes of her introduction: she berates a crying elderly woman who is pleading for a loan so she won’t be evicted; she slut-shames a coworker, who kindheartedly advances the loan that Hae Won wouldn’t approve; and then later, she slaps the same colleague across the face, in front of the entire office. By that point, the viewer might be earnestly rooting for her demise, because she is just that miserable and unlikable. 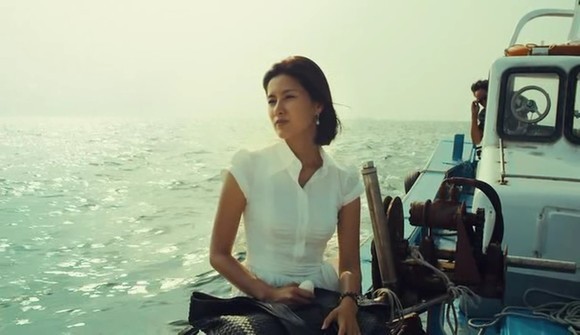 It turns out that Hae Won was at eyewitness to the earlier attack and is called in to identify the suspects. (Another instance that is cause for hate, as she refuses to cooperate and is coldly unmoved by the hysterical pleas of the now dead girl’s devastated father.) After being threatened in a sexual manner in a parking lot, Hae Won decides she needs to take a break by going to visit her grandfather’s house on an isolated, coastal island where she used to summer as a child. The decision is reinforced by a well timed phone call from a childhood friend, Bok Nam, whose unopened letters Hae Won has previously unceremoniously tossed into the trash.

We first see Bok Nam as the only welcoming face on Moo Doo Island,  standing on the very edge of the rocky shore, waiting for Hae Won. The two women are opposites in every way. Where Hae Won is a cold, sophisticated city girl with soft white skin, who’s never worked a hard day in her life, Bok Nam is the island’s sole laborer, punching bag, and bona fide prostitute. 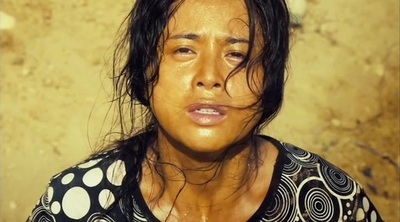 Moo Doo island has dwindled over the years to a mere 10 inhabitants: one selectively mute old man, three old women who perpetuate and encourage the violence against Bok Nam (the eldest, called “Auntie,” is the ringleader and cruelest of them all), two brothers (one Bok Nam’s physically abusive husband, the other her nightly rapist), the ferryman whose sole job is to shuttle the island’s produce and men, and Bok Nam’s young daughter. Having grown up without the protection of parents, this microcosm of a community is all Bok Nam has ever known, and abuse – physical, emotional, and sexual – has been a constant since childhood. Bok Nam can barely read or write and has an awkward and eerily childish demeanor, over-eager and desperate to please. 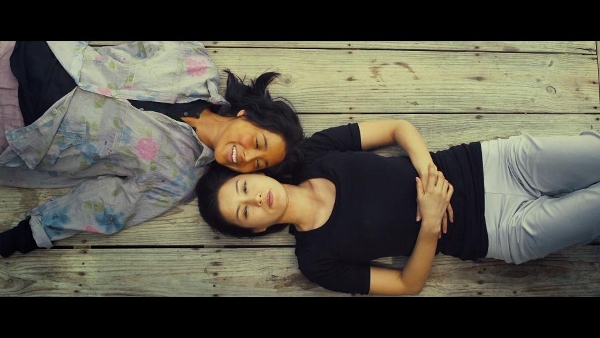 But there’s a reason for Bok Nam’s desperate invitations all these years, aside from the obviously super keen wish to escape her hellish life. Bok Nam suspects that her husband is sexually abusing her daughter (the only thing that’s not shown in this already super graphic movie, thank heavens). Although her daughter is the product of rape (Bok Nam doesn’t know who the father is because she’s been raped by the island’s men so many times growing up), she’s the love of Bok Nam’s life and the only good thing to ever happen to her.

The immediate and logical reaction is that, of course, Hae Won should help. However, the abhorrent being that she is, Hae Won not only refuses but victim blames Bok Nam and sets off a bloody momentum with her indifference and refusal to speak up or involve herself. (Do you sense a theme here?) The escape plan Bok Nam tries to carry out goes horribly wrong and her daughter is accidentally killed. Then and only then, does Bok Nam snap and embark on a massacre, as she sweeps across one side of the island to the other with nothing but a sickle in hand. 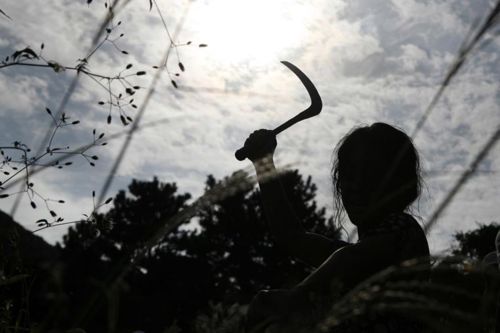 The cruelest part of Bedevilled isn’t so much the horrifying physical and sexual abuse Bok Nam suffers, but the abuse of power by the three old women – particularly “Auntie” – who stand by and praise her husband for beating Bok Nam senseless and encourage the men to continue their violence as an exercise of their right. It’s also Hae Won’s cold and passive indifference to Bok Nam’s suffering that cuts deeper than anything else; Hae Won can save her but chooses not to bother. The only person who attempts to aid Bok Nam is another nobody – a prostitute her husband hires frequently, and she too is consequently raped for doing so.

The question’s that’s been bothering me ever since I first watched this movie is why there is such a lack of compassion for Bok Nam from the women. While they might not have been able to do much, their apathy makes them just as terrible and loathsome as Bok Nam’s husband and brother-in-law. The most disturbing parts of Bedevilled are Bok Nam’s interactions with Auntie, who simply loathes and hates the sight of Bok Nam. In an insular community that small, it’d have been impossible for everyone not to know what was happening to Bok Nam growing up. You’d also think that they’d have more sympathy for someone they’ve watched grow up, but there is none to be found.

Mere moments before Auntie plummets to her death off the island’s cliffs, she boasts to Bok Nam about how she was first brought over to the island by marriage at the tender age of 15. This, along with her constant mantras of how “men know best”, “respect your man”, and “you need a  man”, signifies something akin to Stockholm Syndrome. That one quip puts things into perspective: after being brought into an arranged marriage at 15, you can only imagine that she too, was abused to more or less the same degree as Bok Nam. So why the lack of empathy?

With the island’s men having died off in a sea storm, Auntie is now leader. While she can’t exactly overrule the two able bodied young men, they do defer to her out of respect, and she can rule the rest of the roost with a cruel iron fist, particularly Bok Nam. Now that her word and say are final, Auntie has gone power crazy. When women like Auntie are denied any sort of control over their life, but then are granted power over weaker people, they too can and will join in the abuse.

It’s undeniably satisfying to watch Bok Nam take brutal revenge against her tormentors but it comes at a bitter price. Despite all the shit that is constantly doled out to her, Bok Nam is still a good person (even preventing Hae Won from being raped) and she clings to life with a desperate passion. She feels something better just has to be out there but poor Bok Nam is denied to the very end. It’s the undeserving Hae Won who gets to live and escape back to her cushy life in Seoul.

Bok Nam may have never taken physical revenge on Hae Won but her death is revenge just the same; Hae Won now has to live her life knowing what her indifference has caused. While one of the first things Hae Won does upon her return is to march into the police station and outright confront the suspects from the beginning of the movie head on, she goes home knowing that it’s still too late to fix the wrong she did by Bok Nam.

This entry was posted in the psyche of the revenge film. Bookmark the permalink.

1 Response to The Betrayal of Women in Bedevilled