Five Avengers Too Horrible to Ever be Committed to Film 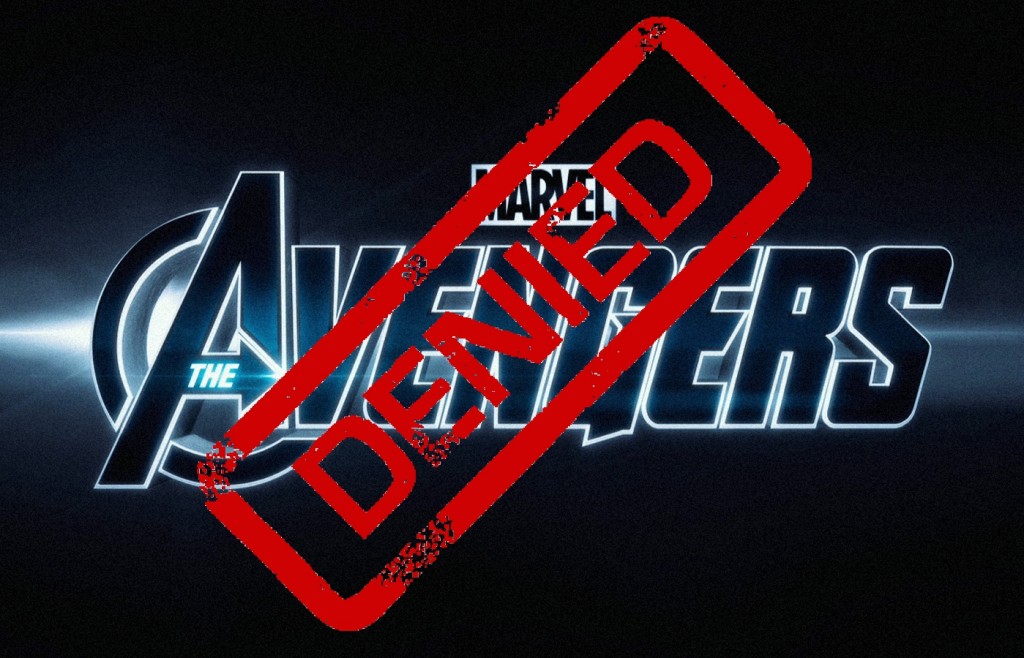 With Marvel and Joss Whedon’s Avengers tearing up the multiplexes and making audiences believe a man can fly, build battle armor, throw shields, punch things really hard, and/or enjoy a good shawarma, a sequel is as inevitable as Steve/Tony/Harry/Draco slashfic. The starting lineup for the next film is likely to be a subject of rampant fan speculation, until some time in 2014.

In order to stave off the failings of other team-based superhero flicks (you know who you are), I hereby submit a list of  card-carrying Avengers too creepy, misogynistic, racist, or just plain wrong to ever, ever, ever make it on the big screen. I hold no illusions that anyone involved in Avengers 2: Avenging Boogaloo is likely to heed my warnings. But, by the Allfather, I hope they have enough common sense to reach this conclusion on their own.

The Avengers are, according to their masthead, the Earth’s Mightiest Heroes.  So I had to dig deep to find truly awful characters. On the other hand, did you ever expect to see Whiplash in a major motion picture? Whiplash? Really? Did Living Laser turn them down? Was the Circus of Crime on tour? What I’m saying is, any one of these folks could actually appear in an upcoming movie. 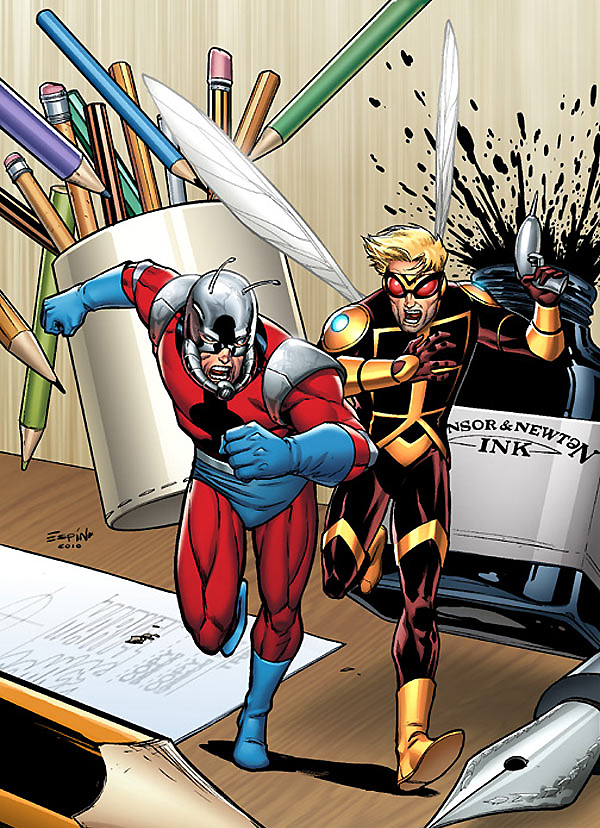 New codename? Must be Tuesday.

WHAT’S SO BAD ABOUT HIM? Beats his wife. That’s a No. 1 reason to disqualify him right there. But let’s just say movie continuity undoes that bit; let’s just assume it’s unfair to judge a character by a single panel. How about the fact his wife, Janet Van Dyne, is his dead best friend’s daughter? Consider, also, how he coerced her to retire from superheroing because it was “too dangerous.” There’s also the bit where, in order to get her to marry him, he actually faked his death, claimed he was someone else, and kidnapped her? And, just to prove that he might as well be a supervillain, he built Ultron, a robot who, once implanted with an AI based on Pym’s personality, decided it wanted to kill every last human on Earth. Hank Pym is a walking disaster.

If you take away every misstep and psychological malady that makes Pym such an irredeemable ass, you’re left with, what exactly? A Bruce Banner who gets smaller the angrier he gets?

THREAT LEVEL: HIGH.  As a founding member of the Avengers, and with an Ant-Man movie in the works, unfortunately, this creep is almost guaranteed to show up in multiplexes. 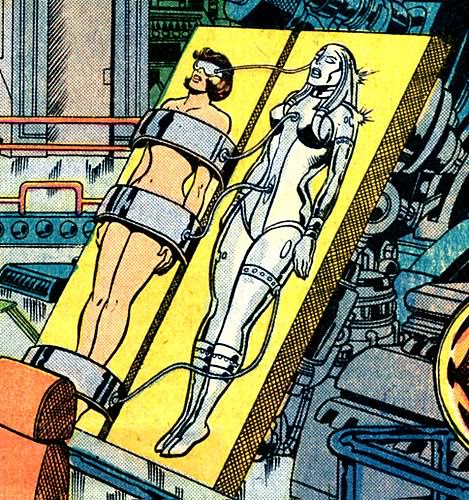 Everything you need to know right here.

WHAT’S SO BAD ABOUT HER? The problem with Jocasta is that her creepiness isn’t strictly her fault. She’s actually a fairly stand-up lady, for a soulless machine. What makes her un-filmable is that she’s impossible to explain without getting into some seriously messed up relationship dynamics. If you’ll recall, I mentioned that Hank Pym built a genocidal robot called Ultron, with AI was based on Pym’s personality. One day, Ultron gets lonely and builds a female robot with massive breasts, then brainwashes Pym into programming the body with a copy of his wife’s personality. Jocasta escapes and helps the Avengers defeat him, but, guess what? She is programmed to rebuild Ultron every time he’s destroyed.

Yeah. She’s a wife who can never, ever get rid of her awful husband. And she’s further proof that Hank Pym ruins everything he touches.

THREAT LEVEL: MODERATE. Let’s assume that an Ant-Man movie gets made. Hank Pym is best known for four things: changing size, not having an ethical bone in his body, building Ultron, and being an abusive son of a bitch. The latter three make Jocasta almost inevitable. 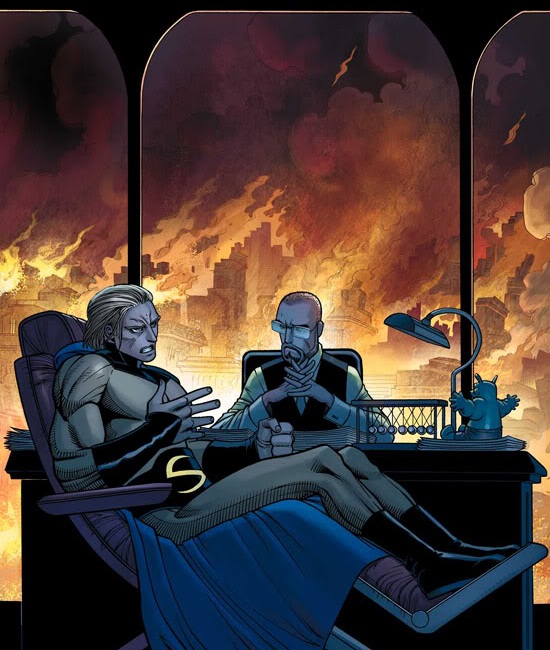 What do you mean, “Proof of Insurance”?

WHAT’S SO BAD ABOUT HIM? The Sentry is a schizophrenic meth addict – with all the powers of Superman – who keeps killing his wife, then bringing her back to life. He’s also got this bad habit of tearing in half anyone who annoys him. He is an experiment in deconstructing superheroes, gone horribly awry and given an Avengers membership card. Half of the time he’s a well-meaning simpleton with the power to destroy the world; the other half he spends as The Void, an ill-defined thing that wants nothing more than to destroy the world, making his wife wish she’d killed him in his sleep.

It’s really hard to communicate how wrong The Sentry is without explaining his back story, yet it’s nearly impossible to explain. What started as a fairly clever tale about a forgotten superhero has become an illustration of everything that’s wrong with comics’ portrayal of psychological problems, retconning, and keeping characters around past their expiration date.

THREAT LEVEL: LOW. The Sentry is just an unfilmable, unmitigated mess. Though the fact that he’s essentially Superman with all the blue bits colored yellow, and a crippling drug addiction at that, is likely to be the biggest thing keeping him off the big screen. 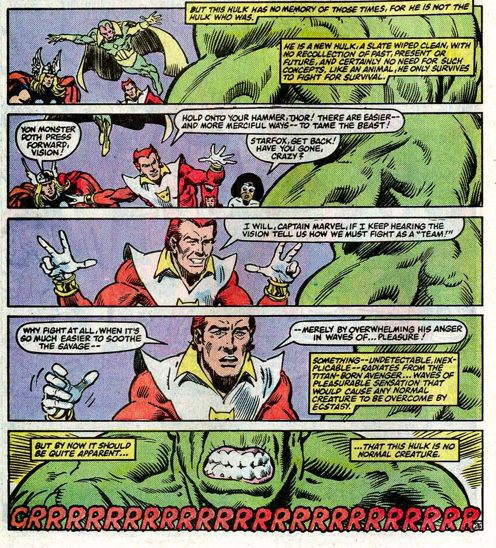 WHAT’S SO BAD ABOUT HIM? Aside from the fact that his showing up on film means there could never be a movie about the furry Nintendo characters that fly space fighter jets? How about alien beer goggle powers? See, in addition to being super-strong, invulnerable, and able to fly, Eros of Titan can also stimulate the pleasure centers in the brains of anyone within 25 feet, causing arousal, euphoria, and lowered inhibitions. In fact, he doesn’t even control it: it’s just on all the time. Hell, his codename, “Starfox”, was only given to him because the Avengers felt his given name was too unseemly to put on their official roster.

To date, he is the only Avenger ever prosecuted for sexual assault. (I’m absolutely serious.) In a 2007 She-Hulk storyline, Shulkie is hired to defend Starfox after one of his conquests gets him arrested and rightly states that being sexually coerced by superpowers does not constitute consent.

THREAT LEVEL: MODERATE. This is higher than you might expect from a goofy 1970’s concept with a core of sheer, skin-crawling creepiness. The thing is, Starfox is… (BEGIN MASSIVE AVENGERS MOVIE SPOILER)

…Thanos’ (yes, from the post-credit sequence Thanos) brother.  As if you couldn’t guess from his name. 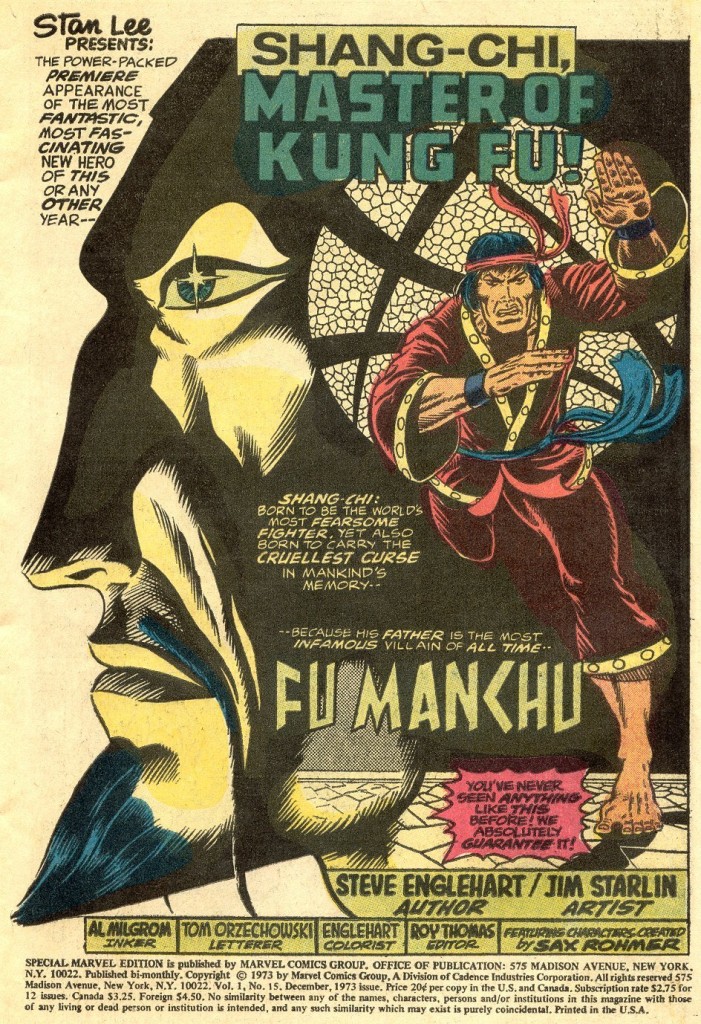 This is an actual thing. That was actually published.

WHAT’S SO BAD ABOUT HIM? As much as he’s been well-executed in the past few years, the problem with Shang Chi is that he is possibly the most stereotypical, racist character in the Marvel Universe. He is a product of a strange confluence of licensing coincidences and was created by a couple of white dudes in the 70’s, who might not have ever met an actual Asian. His made-up name means “rising spirit,” because he couldn’t have an actual Chinese name. He is a serene, centered, and taciturn master of kung fu, who wants nothing more than to retire to a quiet fishing village but keeps getting forced into fights. (I can almost hear our own Lois Payne gnashing her teeth.)

It gets better (or worse, depending on your point of view): in 1972, Marvel acquired the comic book adaptation rights to both the pulp villain Fu Manchu (progenitor of the Yellow Peril archetype and never once played by an Asian actor) and the TV show Kung Fu (about a White guy spreading Ancient Chinese Wisdom throughout the Old West). Rather than make two separate books, Marvel mashed up the two properties, creating Shang Chi as Fu Manchu’s son, wandering the globe on a quest of redemption while teaching others about the wonders of meditation. I can’t even…

THREAT LEVEL: LOW. Having seen the way Hollywood handled Jet Li and Jackie Chan during their late ’90s/early ’00s US prominence, I don’t think the issue would be an unwillingness to film a base stereotype. It’s just that Shang Chi isn’t a great fit for the movieverse as it stands now, and would be more at home in a Heroes for Hire flick.

This entry was posted in comic books and tagged avengers, marvel, the avengers. Bookmark the permalink.