In honor of Valentine’s Day, and thumbing my nose in the general direction of documented homophobe Orson Scott Card writing Superman, I hereby present my unscientific, completely biased, entirely personal, and in-no-particular-order list of top four (with a bonus) favorite LGBTQI couples in superhero comics.

Queer characters have had a rough go of it in mainstream comics (not surprisingly, given what’s perceived to be the primary audience). Even so, writers, especially in the past decade, have managed to include some truly wonderful relationships. 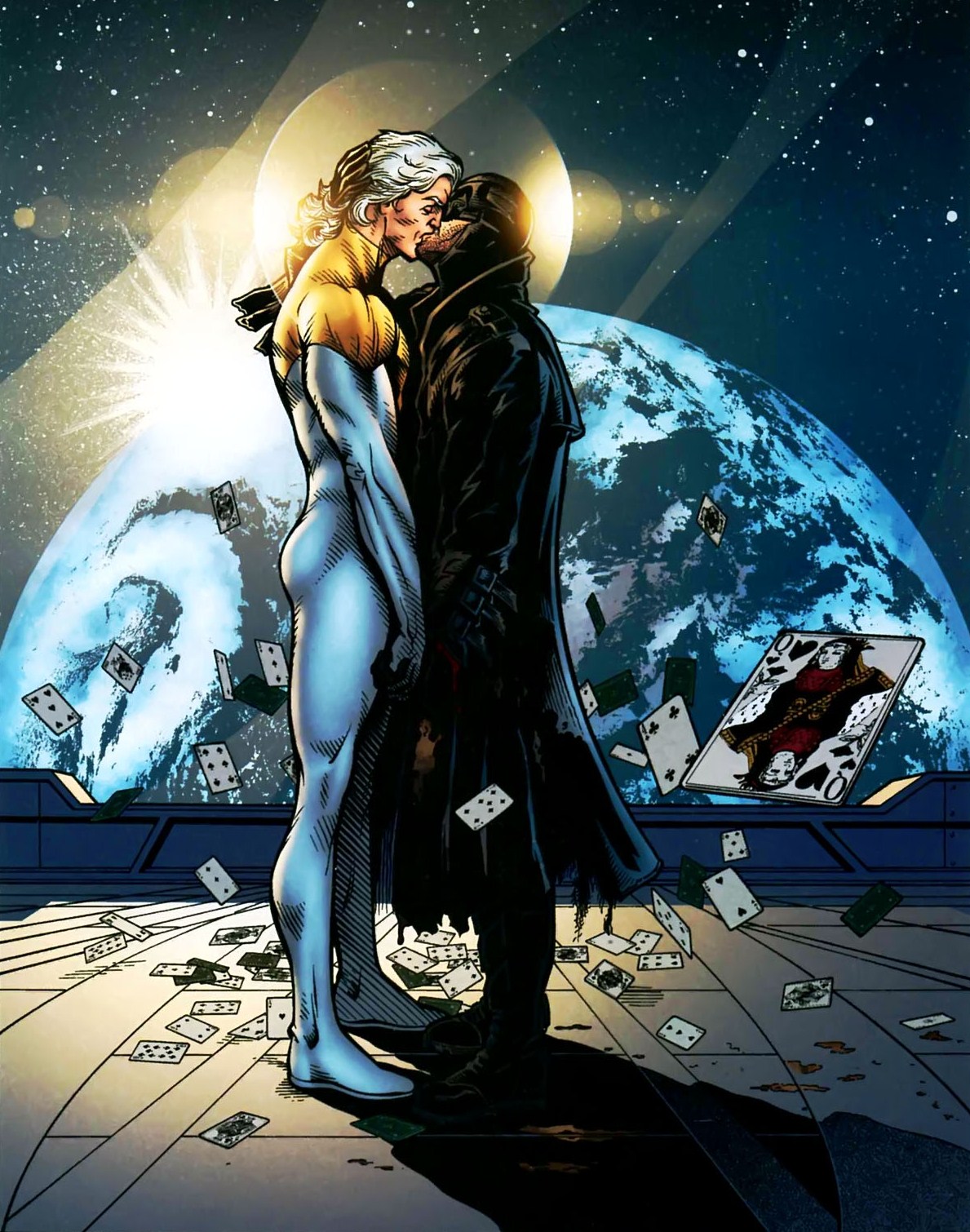 Springing from the pages of Warren Ellis’ heady, black ops reboot of Jim Lee’s  Stormwatch, Apollo and Midnighter really came into their own as Superman and Batman analogues in the incredibly fun (under Ellis and later Mark Millar, at least), terribly violent, often completely gonzo deconstructionist Justice League riff,The Authority. For those of you who ever shipped Clark and Bruce, these gentlemen are the next best thing. And they had a lovely wedding. 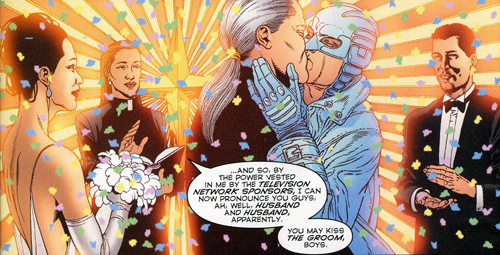 It’s a  shame their relationship lost most of its history and a lot of its punch with their transition to DC’s New 52. 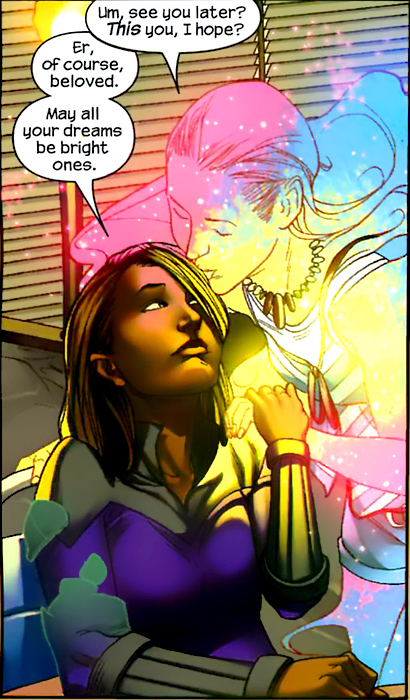 Karolina Dean and Xavin, from Brian K. Vaughn’s Runaways, had absolutely nothing going for them as a couple. Karolina’s parents betrayed their home planet of Majesdane to the Skrulls led by Xavin’s father. Their marriage was arranged when they were children. And, not incidentally, Karolina is a lesbian while Xavin presented as male. For a shape-shifting race like the Skrulls, changing one’s gender is like changing one’s clothing (though Xavin was much more fluid than most). After years of struggling with her alien nature and her sexuality, Karolina found in Xavin a lover who not only accepted her unconditionally, but also put her first until the heartbreaking end. 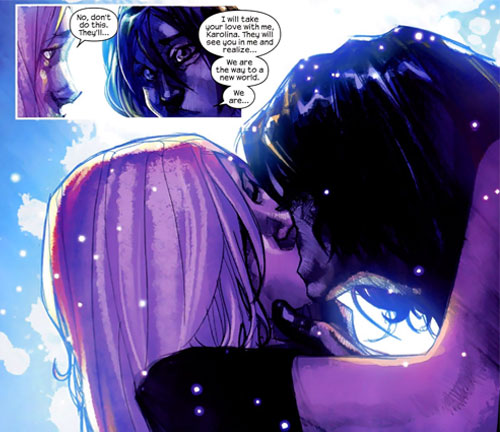 Last time we saw them, Xavin ended up imprisoned in order save Karolina from being punished for her parents’ crimes. As Runaways goes on hiatus with alarming regularity, we may never know if this couple will find each other again. 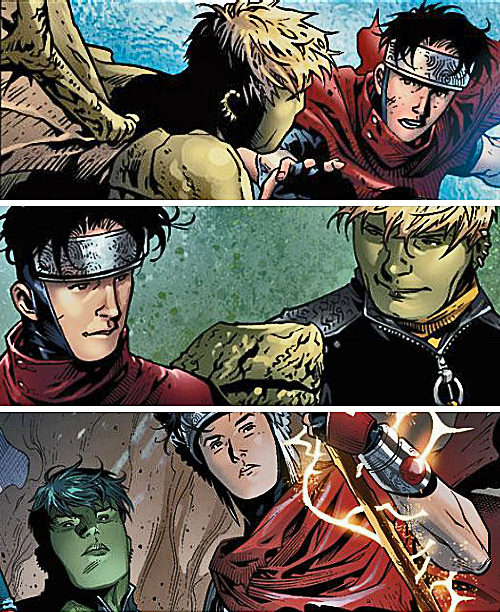 Created for Young Avengers by Sex and the City, Gilmore Girls and Grey’s Anatomyproducer Allan Heinberg, fan-favorite couple Hulkling and Wiccan (known to fandom as Teddy and Billy) have launched hundreds of adorable couples cosplays and more NSFW fan art than you can shake a magic staff at. Teddy is a half-Kree, half-Skrull warrior raised as a human; Billy is the incarnation of one of Scarlet Witch’s imaginary children with the android Vision (don’t ask), with a penchant for Asgardian fashion. Their relationship brought a touch of tenderness and normalcy to the fraught, often difficult lives of the Young Avengers. 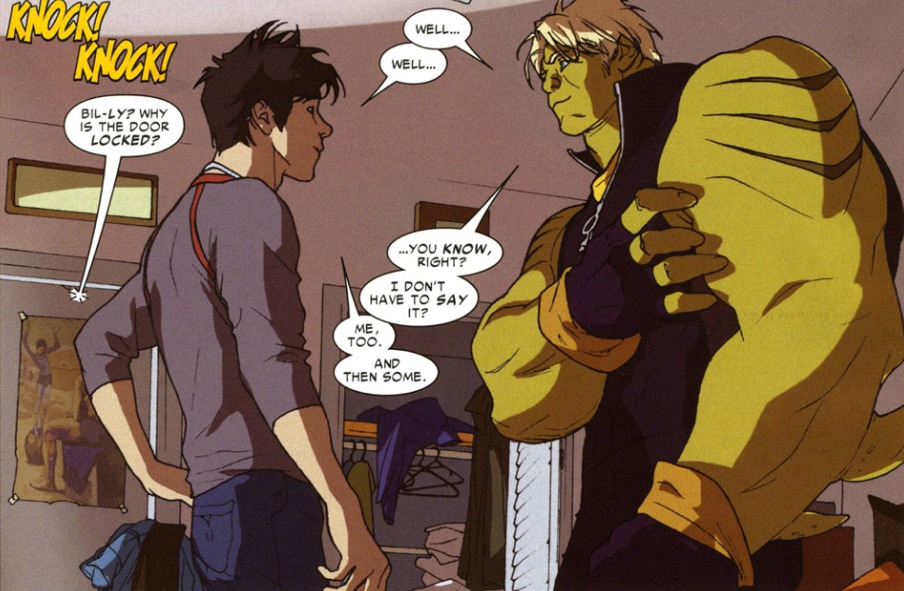 Unlike every other couple so far, Teddy and Billy haven’t been retconned, canceled or fridged. In fact, after a succession of miniseries, Young Avengers has been relaunched with a new roster that prominently features our boys. 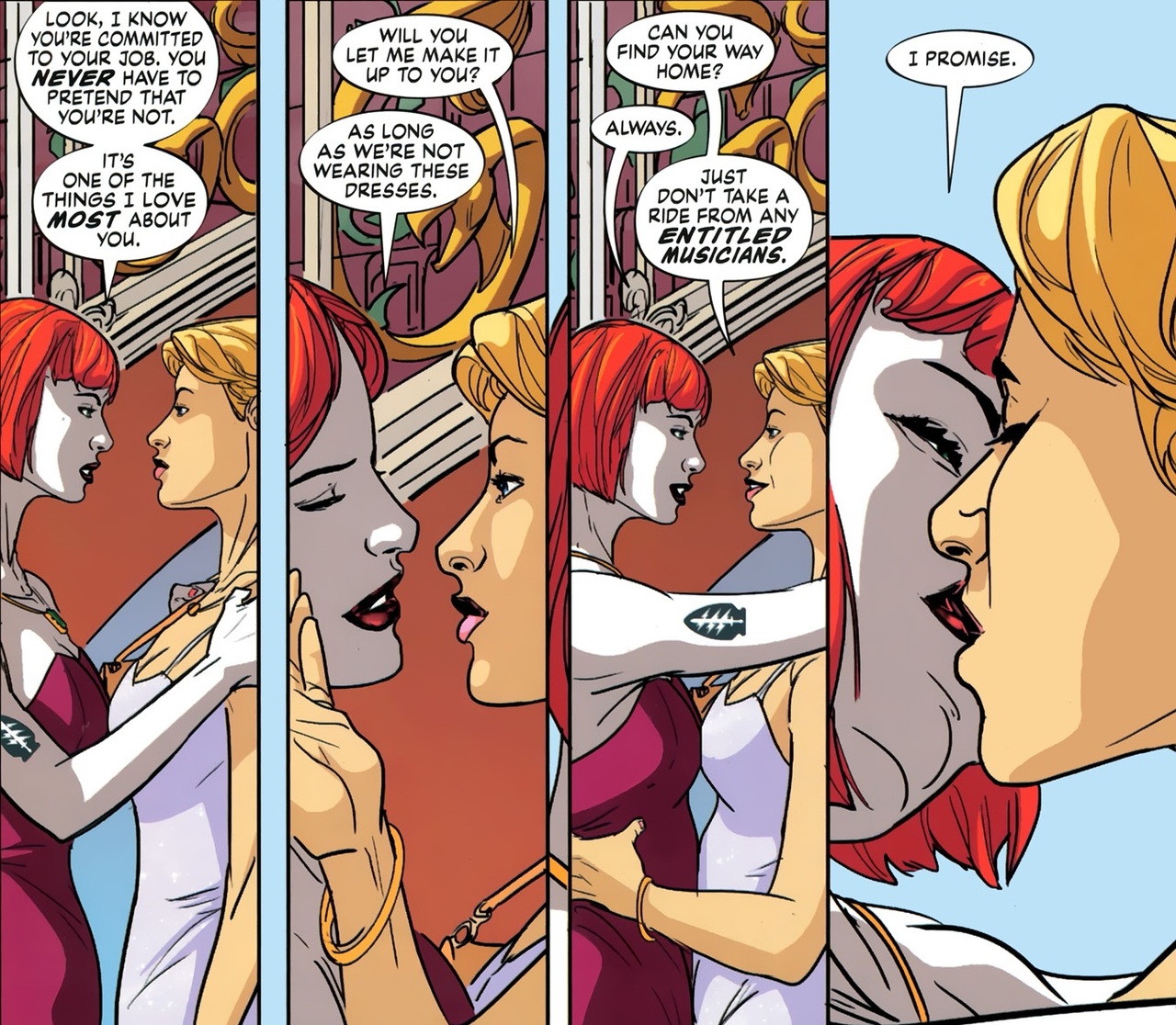 I’m a big fan of the idea of Kate Kane (Batwoman) and Reneé Montoya (The Question before the New 52 reboot) being a thing again (because it would be a cool riff on the Question/Huntress relationship on Justice League Unlimited). However, watching Kate and Maggie go from sly courtship to a complex, adult relationship over the past few years has been extremely rewarding. Kate is possibly the only lesbian-identifying character to have a mainstream comics series, and Maggie, created in 1987, was one of DCs very first queer characters.

It hasn’t been easy for them, what with Detective Sawyer’s job and Batwoman’s secrets. They flirt, they fight, they fail each other, but they do what real people do: they work at it. 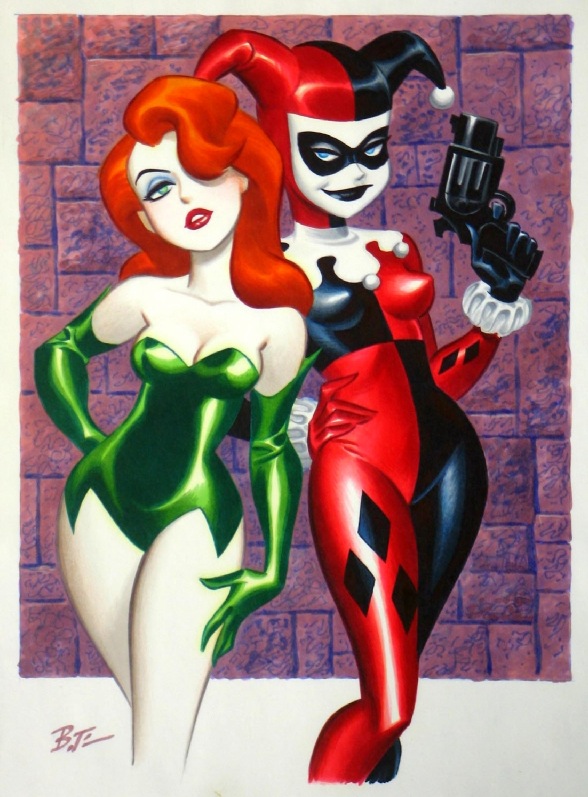 No list of favorite couples (period) in comics would be complete without mentioning Drs. Harleen F. Quinzel and Pamela L. Isley. Their relationship as best friends, roommates, partners in crime and intimates in Batman the Animated Series was the closest thing I can recall to a gay/queer couple on a children’s cartoon until, perhaps, very recently. If anything, Ivy was a huge part of Harley coming into her own as a character, apart from the Joker. While they never came out and said it, their portrayal on the show and its tie-in comics was not the platonic partnership of, say, Batman and Robin (or even Batman and Batgirl). And if his art is any indication, their relationship was pretty clear to show-runner Bruce Timm (although I can’t be sure how much of that was canon, and how much amounted to fan art by the show’s creator). Without an official confirmation (and given the fact that they’re technically villainesses), I prefer to emphasize superhero favorites that are unambiguously out and proud.

Still.  They were great together, weren’t they?

So, folks, this list isn’t anywhere near exhaustive (no Scandal Savage/Knockout or Rictor/Shatterstar, for shame!), they’re just my personal favorites.

This entry was posted in comic books, holidays, lists. Bookmark the permalink.