UPDATE: Well, mass shaming on the Internet really DOES work sometimes! Matthew wrote an apology, which we are happy to see. You can still read our original criticism, as x-posted from our reaction on Tumblr, below. We’re happy to have contributed to better understanding between geeks.

If you’re a fellow Tumblr user, you’ve probably seen this latest from The Oatmeal going around today: 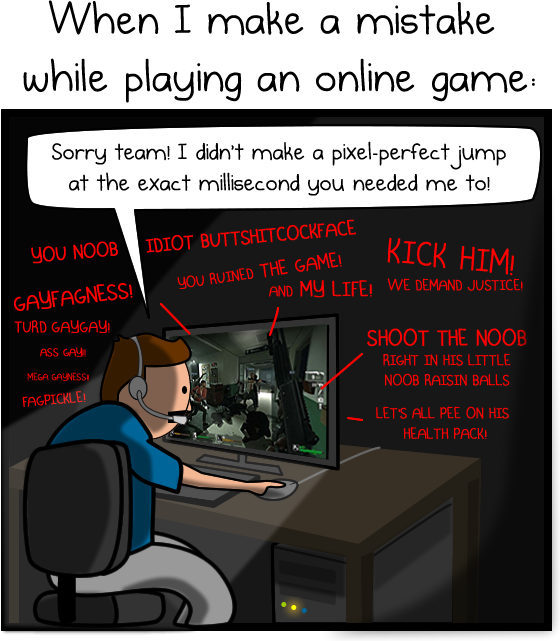 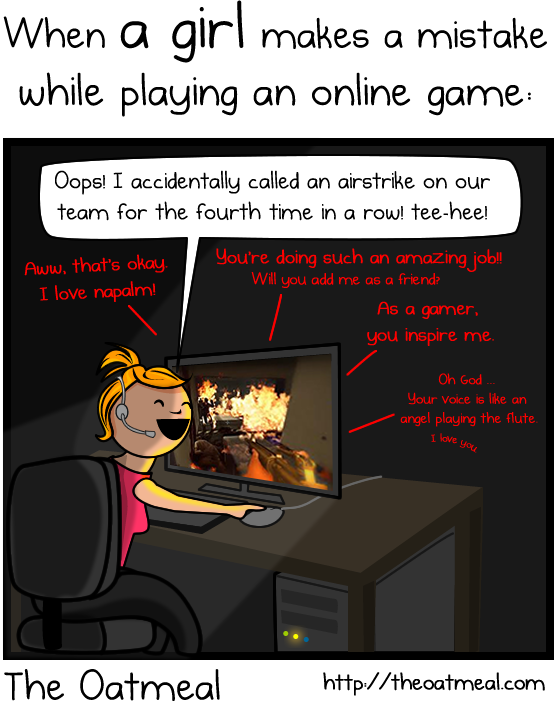 I’ve loved the site in the past, but when I read this one, the only thing I could think was, “WTF? Excuse me?” The strip is steeped in oblivious male privilege and misogyny, and Matthew’s reply to the shitstorm, which he added to the Tumblr post, doesn’t really help things:

A lot of people seem grumpy about my latest comic about online gaming as a girl.
I wasn’t implying that girls suck at games. I was implying two things:
When girls play, often times no one takes them seriously.
If they screw up, often times the room is filled with lonely dudes who say things like “LOL that’s okay! Will you marry me?” If I screw up I get eviscerated.
In short: a terrible female gamer gets away with way more than a terrible male gamer (like me).
This came from my recent escapades playing Left4Dead online.
Again, I meant no ill toward lady gamers.

Given the grandiose contact policy on The Oatmeal’s site, a catch-all for anyone who might be “grumpy” about the content, it doesn’t seem like there’s much interest in being open to an involved dialog. However, if for some reason you are reading this, Matthew, I want to remind you that you will NEVER know what it’s like to be a woman gamer. Let me try to explain this in terms you can understand.

In WHAT world is the above comic a reality? Female gamers get away with FAR less than male gamers. When you screw up a raid or bring the team down, you get called out on it. But on top of that, even when a woman is an excellent gamer, there’s still tons of hate. There are countless stories of women being subject to name-calling, threats of violence and rape, and horribly sexist declarations like “Get off the console and back into the kitchen!” from male gamers. They still get demands for nude photos and detailed descriptions of the sexual acts their male counterparts intend to force the women into. They get called “slut”, “whore”, “bitch”, “dyke”, and a whole slew of other terrible things. Check out Fat, Ugly or Slutty, a blog dedicated to women telling the tales of their experience in gaming, and then tell me that guys “go easier on women”.

The Oatmeal might be full of hits, but the big misses like the above comic make me angry enough never to read The Oatmeal again.

This entry was posted in really? and tagged web comics. Bookmark the permalink.

1 Response to Really, The Oatmeal? REALLY?