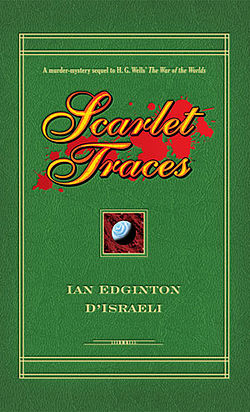 Scarlet Traces is Ian Edginton’s series that expands on H.G. Wells’ War of the Worlds, and it’s the kind of story I wish would continue forever, because it’s just that badass.

The plot picks up ten years after the Martian invasion of Great Britain. The British were victorious, and in their victory inherited a great deal of Martian technology which has advanced them to be the No. 1 Worldwide Superpower. Things aren’t all tea and biscuits, however, as the mysterious disappearance of a young women sparks the curiosity of Major Robert Autumn, as well as his manservant Arthur Currie, whose niece is counted among the missing. What these men find is the gruesome truth behind all of the technology that has bolstered Britain’s place in the world.

There is a lot to love about Scarlet Traces: the steampunk setting, the references to other works (see if you can spot Tintin, Captain Haddock, and Snowy), and the fantastic imagining of how modern technology would look, had our sources come from beyond the stars. It’s fascinating to consider how people in the early 1900s would have approached space travel or automobiles. D’Israeli’s art style is perfect for this story, the boldness of it really reflecting the audacity of the British Empire in this timeline. 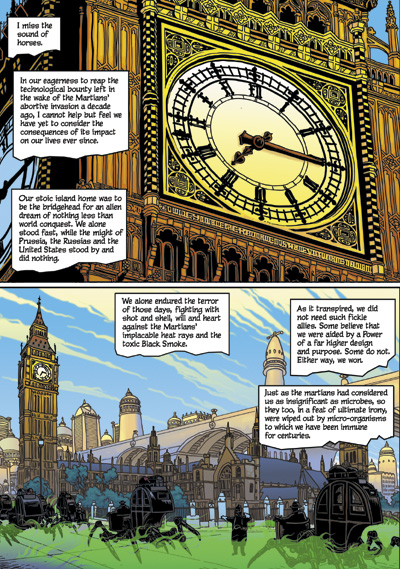 My one concern is that there is not a single person of color that I can remember seeing in the entire series. I mean, the British Isles have never been 100% lily white, yet diversity just was not reflected in this story at all. It really makes me wonder about people who are all about including aliens, but for some reason a person of color doesn’t even cross their mind.

At any rate, despite its shortcomings, I enjoyed this book greatly. As a huge fan of War of the Worlds, it’s great to see an interpretation of the aftermath that is well-written and thought out.