There is mass of #1s this time around, largely due to DC’s major September event, Villains Month, so this is part two of this week’s review. The mega-cross-over-world-shattering-re-boot-super events that Marvel and DC are so fond of usually aren’t my bag. While it is an obvious marketing ploy to drag me to lesser-read titles, it’s fair game, since I actually want to read comics. But usually, these events introduce a lot of guest writers and artists, interrupting the ongoing storytelling in the books I like, which can be frustrating. DC’s latest mega-event comes with a twist, and it’s one that provides what many readers might be looking for. 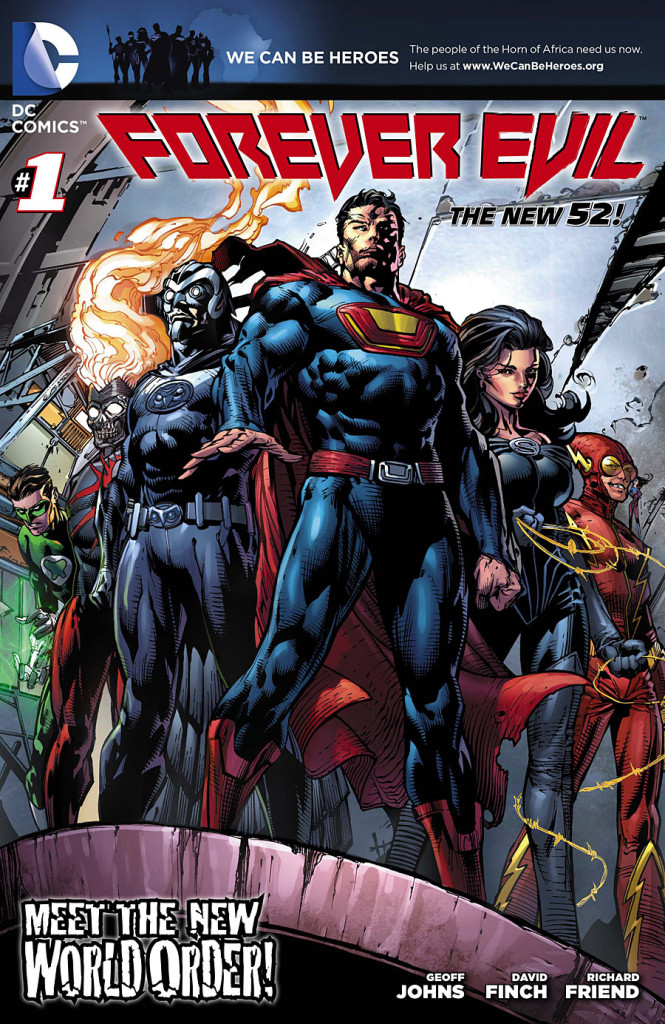 It all begins with a one shot, Forever Evil #1. Villains Month stems from DC’s last big event, the Infinity War. (Something I largely skipped, simply by reading the Batman titles that I enjoy.) The Justice League is “dead” and the alternate dimension counterparts known as The Crime Syndicate have taken credit for their deaths and descended upon the “real world.” All of the DC villains have been given the chance to become the newest incarnation of the Secret Society, to wreak fear and havoc upon the new world these evil doppelgangers seek to rule. It’s a fairly bland introduction, and it’s somewhat disappointing to see the Crime Society characters rehashed so shamelessly in the New 52. But under the stewardship of DC’s creative director Geoff Johns, this title kicks off Villains month well enough.

The meat of the September event is that every single DC title this month is rebranded as a #1 issue, featuring a villain appropriate to the title. For example, Flash #23.1 (the .1 is to help maintain continuity for the collectors, I suppose) has become Grod #1, while Bizarro #1 takes over the regular Superman title, and so on. Each story is essentially a one shot, many of them origin tales of the villains that haven’t yet been fully explored in the New 52 universe. This provides for some interesting writing and artistic direction, with some notable examples. 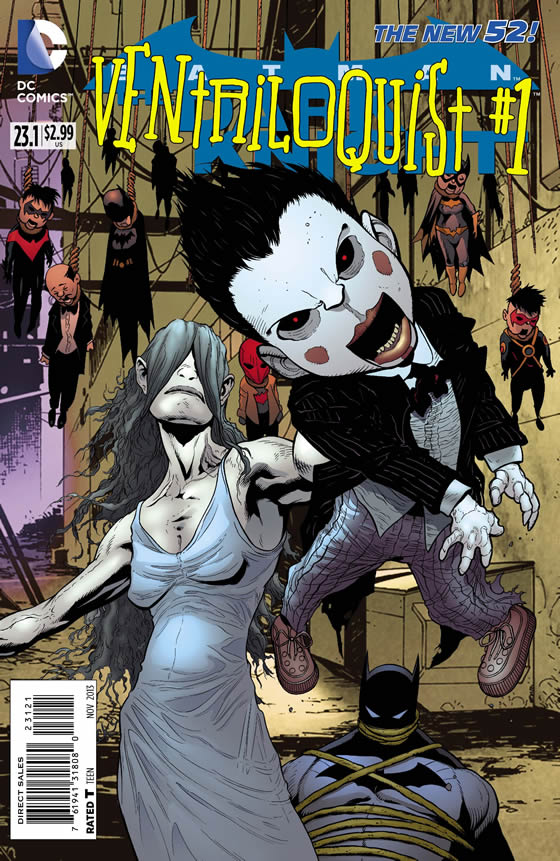 Without question, the best and the darkest of these comes from super star writer Gail Simone and artists Derlis Santacruz and Karl Kesel. It’s Ventriloquist #1 (Batman: The Dark Knight #23.1) and when we say dark, we mean it. This is a reinvention of the previously incredibly cheesy Bat villain, and it’s frightening in its complexity. The original Ventriloquist was convinced his puppet Scarface was a living thing, forcing him to commit crimes and become a gangland figure in Gotham’s underworld. This new incarnation dispenses with the gangster image all together. Shauna Belzer grew up with her twin brother Ferdie, a handsome and talented young boy. Where Ferdie was gifted, his sister was plain, and often overlooked by everyone. Her young mind was clearly broken at an early age, as she recounts one story of her own rise to fame, and we see the truth in the art work, depicting a fractured, deeply sad psyche. At a young age she murdered her brother, and her blood lust didn’t stop there. Shauna is determined to be a star in her own right, and kills a working ventriloquist at a children’s party, stealing his doll and renaming it after her brother. Now she’s on a frightening mission of mayhem, cut loose in Gotham City without Batman’s protection, and the citizens are in deep trouble. Shauna, unlike previous incarnations of the character, seems to have a superhuman ability to make her puppet walk and talk on its own, and “Ferdie’s” attacks off her lap are as frightening as the dark deeds of his mistress. This is as close to a horror comic as we’ve seen in the New 52. Despite The Ventriloquist’s meta-human reboot, she’s a scared and damaged woman, and a more realistic version of the character. Look forward to her promised appearance in Batgirl in the future. 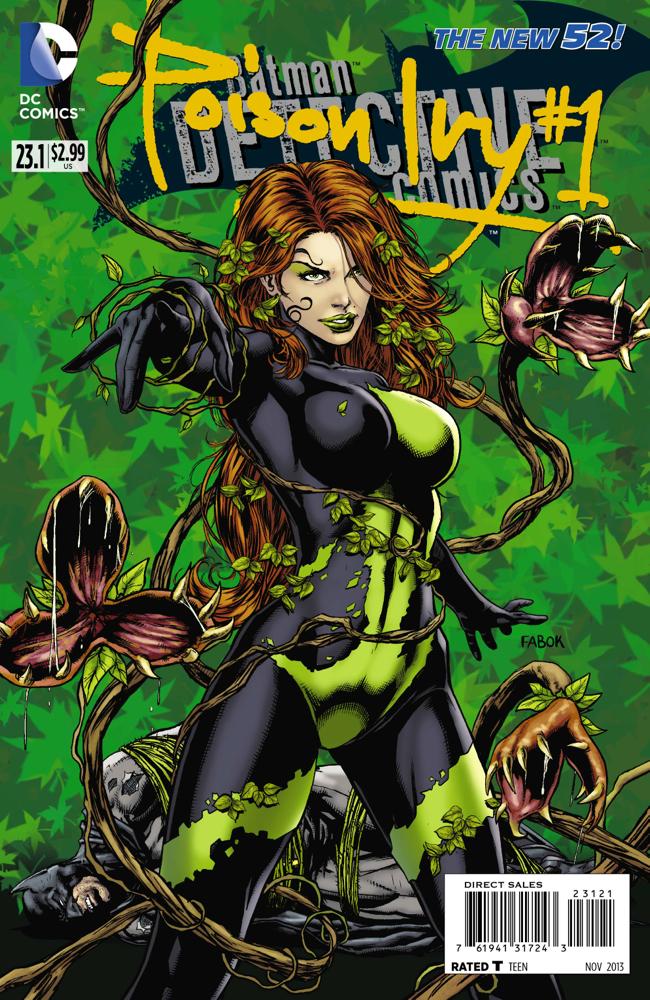 Poison Ivy #1 (Detective Comics 23.1) gives new light to the origin story of a great female character we know quite well. Ivy’s father was a violent man, and her mother lived in denial, planting her husband’s apology flowers in her garden. Writer Derek Fridolfs pulls no punches, giving us a deeper look into the troubled youth of a character long depicted as a seductress fighting for Mother Nature. Ivy’s obsession with plants in her youth – her father buried her murdered mother in the aforementioned garden – is more clearly expressed as a reaction to emotional abuse and loss. Her violent jaunt through an unprotected Gotham is as disturbing as The Ventriloquist’s, a far stretch from the anti-hero Ivy became during her run with The Birds of Prey. This tale of her rise and fall entices and disturbs in equal measure, and Javier Pina’s art brings sympathy to a character who is often little more than sexual innuendo wrapped in green leaves.

Poison Ivy also makes an appearance in DC’s only non-Villains Month #1 this week, the reintroduced Batman Black and White #1. A series of desaturated vignettes featuring the Caped Crusader, the book is lighter than some previous incarnations of the title. The story “Justice is Served” features Ivy and Harley Quinn in their more accustomed roles as friends and former roommates, and here we see Harley as the prankster and Ivy as a scientific mind intent on catching a criminal out to frame her, rather than being one herself. It’s got the feel of a story for younger readers, but is no less entertaining, and its portrayal of the bond between these two women is a great example of an enduring friendship in the comics world. Written by Maris Wicks, the tale is the best of the book, joyfully illustrated by Joe Quinones. 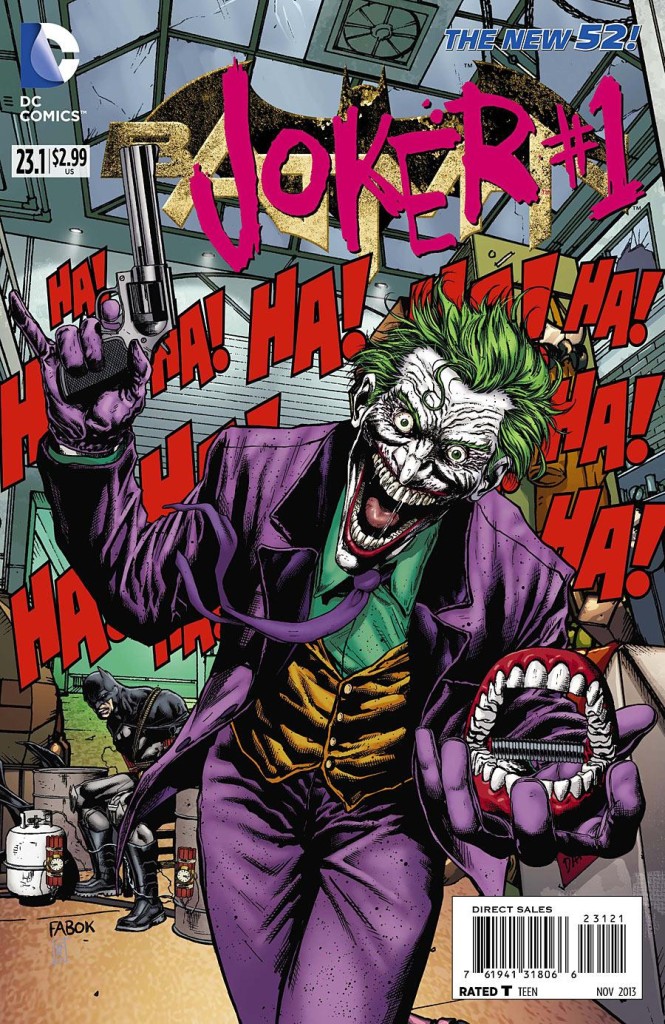 It certainly wouldn’t be Villains Month without The Joker #1 (Batman #23.1). The Joker, of course, has been largely absent from the New 52, except for his severed face. Here he appears in flashback to share his own, long deemed untrustworthy, origin tale. Joker seems to have more memories of the horrors of his life than any one person can keep track of, but this tale of an abusive aunt seems to hold weight. Famed writer Andy Kubert brings flashes of humanity to the Crown Prince of Crime, all while depicting one of his more heinous acts. The story is also an origin of sorts for Jackanapes, a sentient gorilla seen in an alternate future that depicted Damian Wayne as Batman in a post-apocalyptic Gotham. Here we learn that an unremarkable gorilla was the Joker’s first “attempt” at creating such a protégé, and the story is disturbing in its cruelty. Having murdered the baby gorilla’s mother during a heist at a zoo, the Joker almost seems to be raising a son, teaching the poor, innocent creature to revel in horror and mayhem as he does. Jackanapes seems to have some understanding that what he is doing isn’t right, but the Joker of course has very little. Still, the villain seems to have real feelings for the gorilla, and the unfortunate end of the tale brings real sadness both to the character and the reader. This one was hard to take, inducing anger at the depiction of animal cruelty, and having me reeling from the raw malice and pain in a Villain I thought I understood so well. The Joker truly is a force of evil, and the touches of his humanity in this story, so well illustrated by Andy Clarke, only reinforce that point. 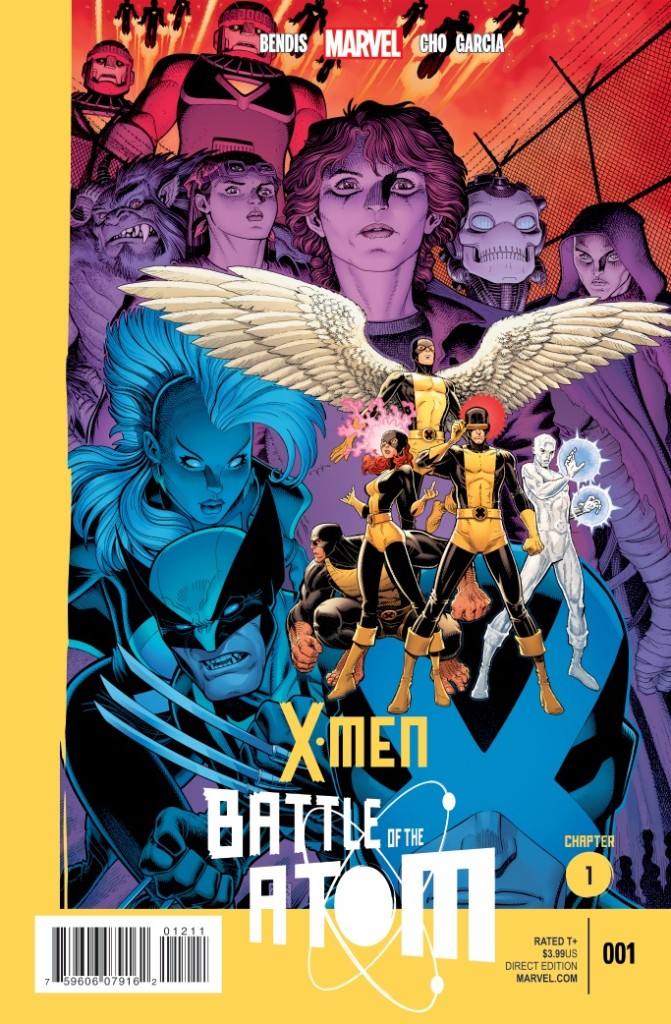 There were other good stories in Villains Month, including a rousing and violent Two Face #1, but the last of the good new stories this week comes from Marvel comics. Not to be outdone, they also have a big event happening, though smaller in scope. It begins in X-Men: Battle of the Atom #1, another of Marvel’s new series that exist only to bookend cross-over events. (The story will bounce across most of the X-titles and then wrap up in BOTA #2). This is yet another time hopping, reality warping story for the X-Men, who seem to spend a lot of time moving back and forth trying to correct mistakes and prevent horrific futures. Two of the most prominent X-Men, telepath Jean Grey and founder Charles Xavier, are dead – for real dead, we’re meant to believe. Hank McCoy, the Beast, has traveled into the past and brought the teenaged, untrained versions of the original five X-Men into the present to show them how bad things might get, and unexpectedly they decide to stay put. Now, a team of X-Men from the future has arrived, determined to send the originals back where they came from in order to prevent … something. All this time-continuum-auto-correct is confusing, but the story does show us some of the best of what’s happening across the X-books these days. They are becoming a sisterhood, largely centered around the X-Men Storm, Psylocke, Kitty Pryde and the various versions and offspring of Jean Grey. The story continues in this week’s All New X-Men #16, and there’s a range of emotion in this core of women that really pushes the story along, despite the convoluted plot.  rom a young Jean’s confusion and mistrust of her own powers, to the love of a Future Jean for her “daughter” Rachel and her best friend Ororo, the X-Women show the bonds and emotional depth that transcend all the spandex and punching. As this story progresses into the all female cast of X-Men and the almost all female cast of X-Force, hopefully the trend will continue.

This entry was posted in comic books, We're No. 1! and tagged DC comics, Poison Ivy, The Joker, Ventriloquist, Villains Month, X-Men: Battle of the Atom. Bookmark the permalink.