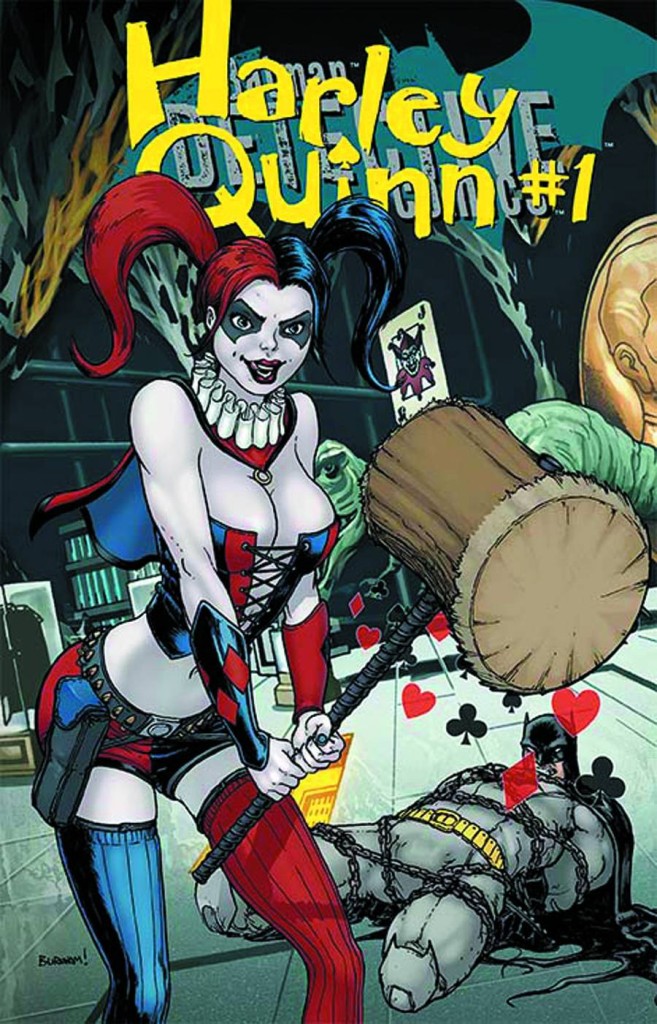 Let’s kick this week off with the super books first, starting with Harley Quinn #1 (Detective Comics #23.2). Besides the recent Batwoman controversy, there has also been some blowback at DC over an artists contest involving Harley, so she was at the front of my mind when this week’s Villains Month titles hit the shelves. Sadly, this one shot about Harley’s origin falls flat, without much new, real detail. The twist – that Dr. Harleen Quinzel made her own choice to adopt the Harley persona, rather than at the goading of the Joker – is original but not enthralling. It does lead to an interesting question about her as a character, however. Harley has long been written as an intellectual woman caught in the web of the Joker’s madness. She was his psychiatrist in the famed Arkham Asylum and was dragged into his world, becoming both his lover and his sidekick. Here we see that Dr. Quinzel might still be the Joker’s victim, but a great deal of her psychological issues are hers and hers alone. She is certainly depicted as less of Mr. J’s puppet, as has been a trend with her character for a while now. Sadly, the story isn’t particularly well developed, as Harley romps about Gotham adding bits and pieces to her ragtag clown look and setting off the odd bomb or ten. The narration by writer Matt Kindt is difficult to follow at times, and the lighthearted style by artist Neil Googe makes it tough to see the darkness in her character. 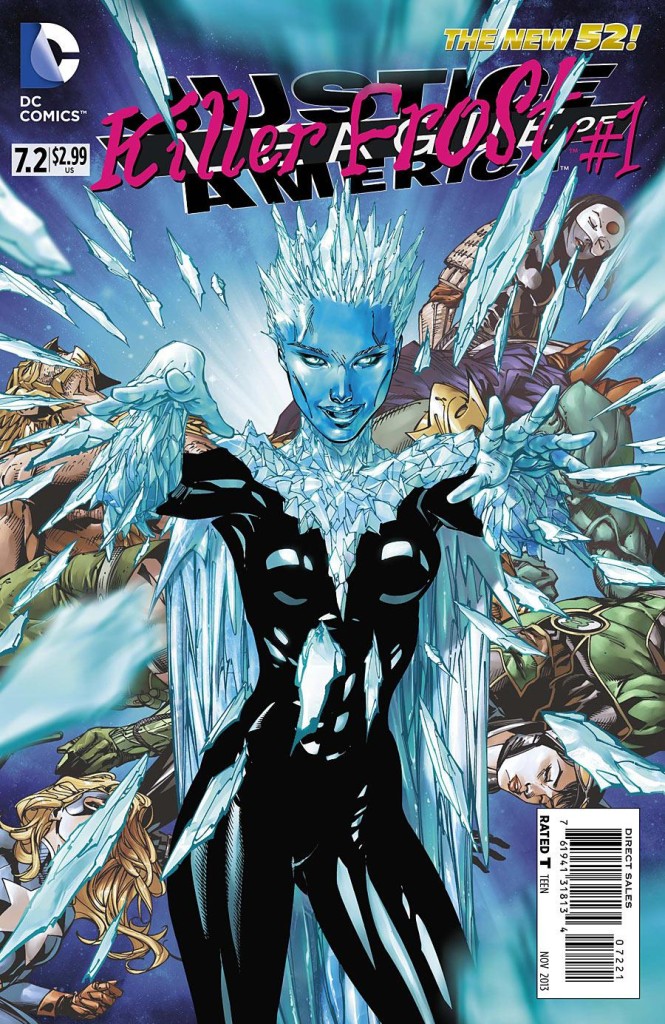 A less familiar female DC Villain fared better this week, in Killer Frost #1 (Justice League of America #7.2). Prior to the release of DC’s Injustice: Gods Among Us video game this past year, I didn’t know about Dr. Caitlin Snow, so I was excited to see her origin tale. Dr. Snow was a prominent research scientist assigned to a Government facility above the Arctic Circle, the station’s previous head researcher having died mysteriously. Her predecessor left behind unfinished work, a revolutionary answer to an ancient idea: the Perpetual Motion Engine. The brilliant Dr. Snow is able to reconstruct the research and perfect the machine, which turns out to be a big mistake. There are insidious forces at work trying to keep such technology under wraps, and its destruction turns the young scientist into a living popsicle. This revamp of the Mr. Freeze-style character is exciting, and she’s been a villain in the camp of Firestorm the Nuclear Man for many years. Her portrayal here is tinged with sadness, a sort of ice vampire hungry for heat from the living and a chance to return to her normal self. She’s not an evil woman, merely one determined to find a way to undo what has happened to her. Snow’s tragedy in many ways defines her and the underlying current of pain in her makes for a well rounded and interesting character.

There were a ton of other DC Villains month titles, but the temporary nature of the titles and creative teams leads to many dull books with little substance, as often happens during these types of massive cross-overs. Of the remaining releases, only The Court of Owls #1 (Batman and Robin #23.2) is worth highlighting. These newly minted villains are a product solely of DC’s New 52 reboot, a shadowy organization pulling many of the strings in Gotham City for centuries. When the city is threatened by the absence of the Batman, they pull out old weapons to try and cover their power base. This is a theme we’ve seen much of lately, the wealthy holed up in their fortresses as the poor masses rise up and demand more than they’ve been granted. It’s a thin metaphor in the book, but it still makes this the only other interesting title from DC this month. 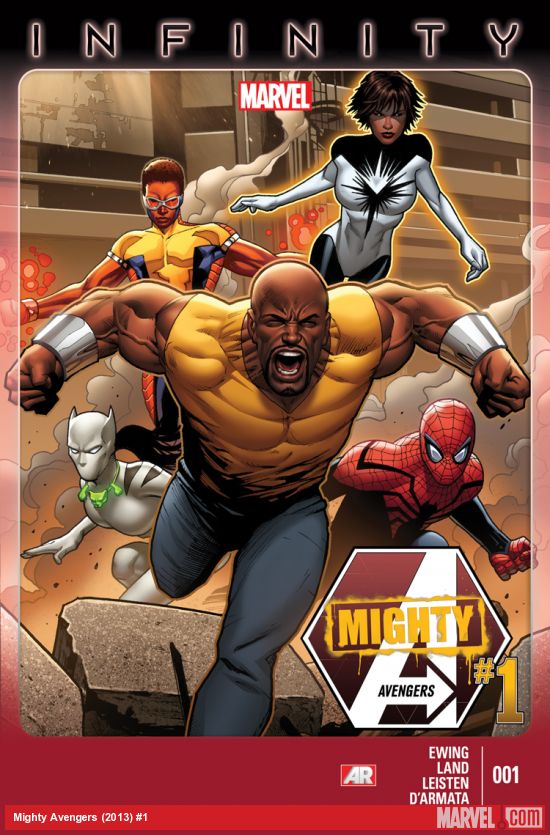 Not ones to be outdone, Marvel had a a few #1’s of their own for consideration. Their home run this week was another in a long line of new Avengers books, Mighty Avengers #1. It’s a story that spins out of the classic Marvel title Heroes for Hire and features Luke Cage as the lead. He’s left the Avengers to be a family man, and raising a kid is not cheap even for a superhero. Thus, he briefly reforms the Heroes for Hire, taking on the young man who adopted his former superhero name, Power Man, and teaming up with the newest incarnation of the White Tiger, Ava Ayala. They are joined by the first woman to take on the Mantle of Captain Marvel, Monica Rambeau (now using the name Spectrum) and The Superior Spiderman, Dr. Otto Octavius trapped in Peter Parker’s body. It’s an unlikely but diverse group of heroes, with two women and four people of color. None of the heroes are treated as token characters or stereotypes, however. Ava Ayala is a dedicated young woman determined to live up to the White Tiger legacy. Monica Rambeau is a long time fan favorite, a former leader of the Avengers and a woman not to be trifled with. The upstart Power Man, Victor Alvarez, is hot headed and eager to prove himself, especially having taken Luke Cage’s former superhero moniker. Spider-Man, even in this unusual new version, is the only White character on the team, and he’s a raging jerk at that, providing an interesting perspective. The story lacks interest, simply a set up tale of a minion of Thanos attacking New York. The plot serves as little more than a reason for these heroes to band together, but it’s a welcome vehicle nonetheless. Plus, the addition of a “mystery hero” who adopts an ill-fitting Spiderman knock off Halloween costume and calls himself “The Splendiferous Spider Hero” is good for plenty of laughs.

The best of Marvel’s work this week wasn’t a #1, thus earning our honorable mention spot, with the latest issue of a series that’s deserving of attention, The Fearless Defenders #9.  he Defenders have been disbanded and regrouped more times than we can count, but they’ve always had an unusual mix of members. Conceived as an alternative to the Avengers, the Defenders tend to pursue more unusual threats, and characters like Dr. Strange and The Silver Surfer have been recurring cast members. This is the second reboot for the Defenders by Marvel in the last three years, and this time they get it right as rain. The Fearless Defenders are an all-female super team, giving a serious run to some of Marvel’s underutilized characters. Two women are at the heart of the story: Valkyrie, the actual Brunhilde of Asgardian legend, long viewed as little more than the female counterpart to Thor, and Misty Knight, a Black bionic private detective who previously didn’t serve as much more than Iron Fist’s girlfriend. Here they’ve come into their own as characters, and have brought many Marvel ladies into the fold. (Danielle Moonstar, formerly of the New Mutants and X-men, and also a Valkyrie; haughty Amazonian goddess Hippolyta; the sorceress Clea, the wife of Dr. Strange; and Elsa Bloodstone, a British monster hunter I hadn’t heard of before this title.) Writer Cullen Bunn has been doing a great job with the story, with a few unusual plot twists, like the introduction of human researcher Dr. Annabelle Riggs, and her subsequent infatuation with Valkyrie, adding an interesting perspective on sexuality. Annabelle is gay, and in love with a goddess who has always been written as a heterosexual character. In fact, this particular issue brings in Valkyrie’s romantic interest in the person of Flash Thompson, the current Venom. While the Defenders are fighting to keep their city from terrible danger, Venom has gathered together the various significant others of the heroic women to sit on their cans and display all levels of ridiculous misogyny and disrespect, as they hold a “conversation” about whether it’s wise for the women to become Defenders.  It’s a riotously funny, on the nose metaphor, and makes for a rip roaring super hero book worth checking out.

Beyond the big two, Boom Studios launched a Sons of Anarchy six issue series, but if you don’t follow the show, I don’t think it will make much sense to you. Valiant Comics released Eternal Warrior #1, in theory a spin-off of their outrageously comic Archer and Armstrong series. This title, about the immortal brother of the man known as Armstrong, takes itself much too seriously, all barbarian violence and zero humor. Meanwhile Dynamite Comics did what they do best, or at least most often. They resurrected some pulp era comic heroes and recast them in modern stories, this time with a three way team up of The Phantom (remember the horrid Billy Zane film?), Flash Gordon (remember the epically campy 80’s era film?) ,and Mandrake the Magician (remember when you first read Mandrake the Magician? No? It’s OK, no one else does either.) The book is called Kings Watch, and the three heroes seem oddly miscast amid all the end of the world scares. I mean, Flash Gordon’s a space hero, and The Phantom lives in the jungle, right? Its plot is highly convoluted and ultimately boring. 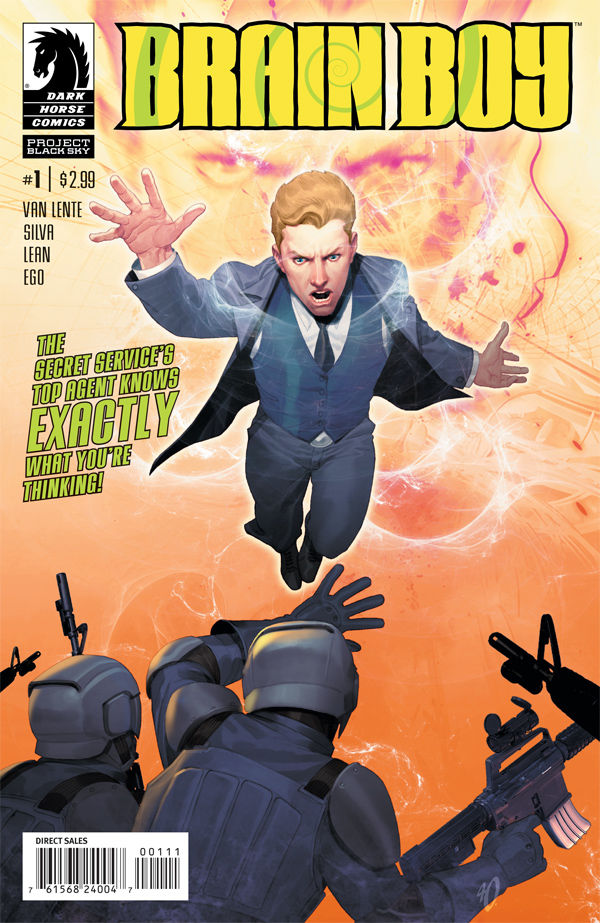 A release from Dark Horse Comics does stand out this week, with Brain Boy #1. The goofy title is in fact an inside joke, directed at the main character Matt Price by his enemies, and his enemies are myriad. Price is a young but powerful telepath and telekinetic who works for the mega-corporation that raised him after his parents’ death. He’s a specialist on loan to the U.S. Secret Service as a psychic protection agent, and he’s run afoul of both the foreign powers he’s guarding during a big U.N. summit and his own countrymen in the CIA. As silly as the concept seemed at first, the book is a fairly compelling twist on the spy narrative, and Matt Price has some unresolved issues of arrogance and family mystery that make him complex and interesting. Just, whatever you do, don’t call him Brain Boy. He hates that.