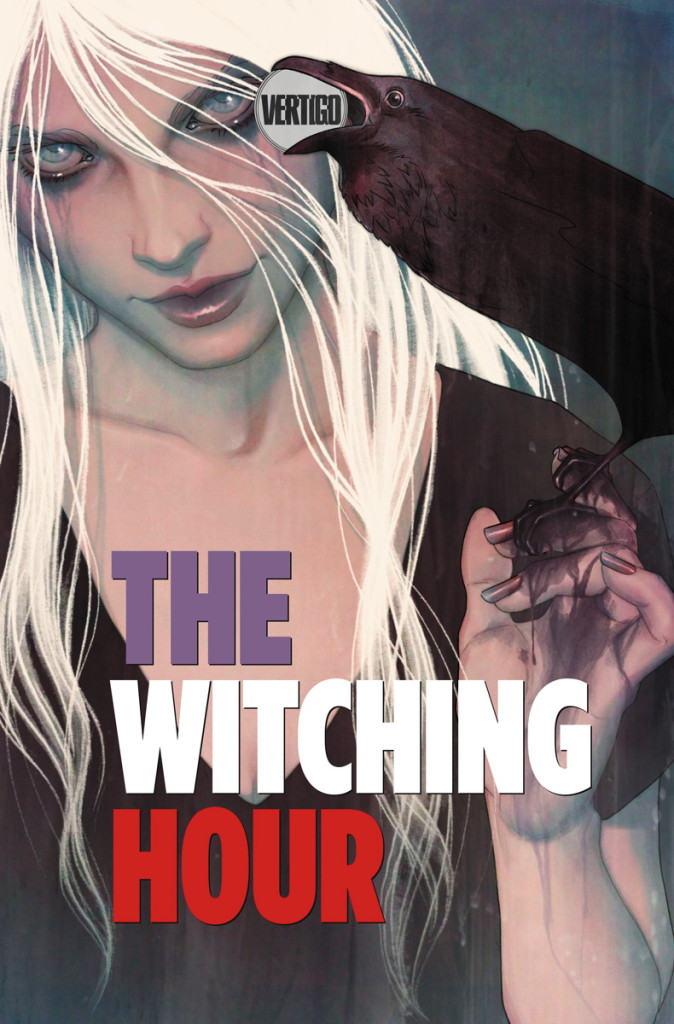 October is one of my favorite months for comics, largely because of the glut of horror stories showing up in anticipation of Halloween. The run up to the holiday begins with the fantastic anthology comic The Witching Hour #1 from Vertigo Comics. It’s a collection of “Nine Tales of Divine Horror,” and it hits the mark well. It’s also a book filled with fascinating depictions of women, both powerful and frightening. The first tale “Daniel” by Steve Beach, is one of the best. It’s a poignant story of three bullied girls rescued form their tormenters by a quiet older man named Charles Morrison, who lives alone in their neighborhood. The three children turn out to have a powerful connection that helps Charles, a long closeted gay man, come to terms with a ghost that haunts his past in a very literal sense. It’s a beautiful tale of friendships past and present, and a fine start to an excellent anthology. Other stand out tales include Captain Marvel scribe Kelly Sue DeConnick’s darkly powerful “Legs”, about a young woman with some deep seated maternal issues and quite a parlor full of flies, and Mariah Huehner and Tula Lotay’s vividly drawn and colored tale of ghostly revenge “Rise”. Annie Mok and Emily Carroll present a vivid portrait of transgender torment and healing in “This Witch’s Work” that’s one of the most visually captivating tales in the book. All nine stories are honestly fine work, including “Little Witch” by Ales Kot and Morgan Jeske, a tale of gender expectations in modern day Afghanistan, and the longings of men and girls in the face of war. The Witching Hour is an anthology I’ll be loaning out to lots of friends who don’t regularly read comics, and it sets October off just right. 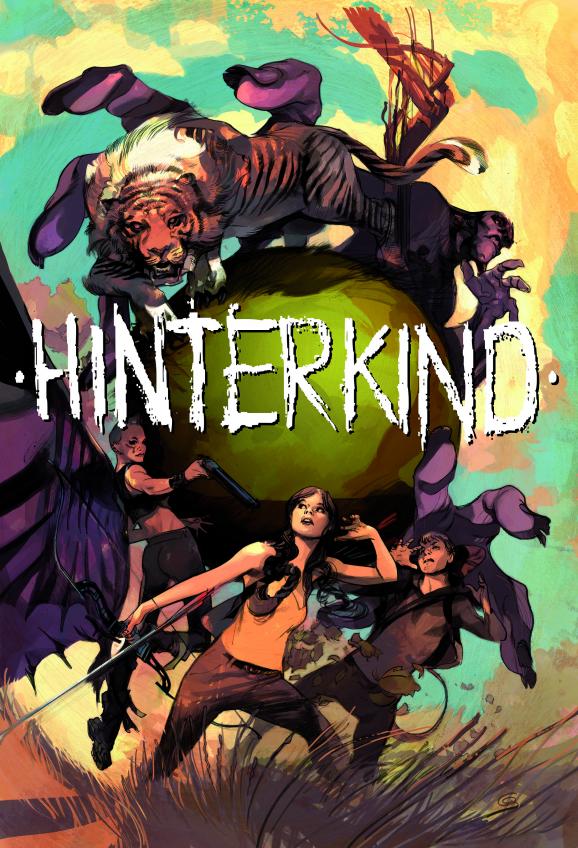 Vertigo also bring us Hinterkind #1 from writer Ian Edginton and artist Francesco Trifogli. A young woman named Prosper Monday lives in a post-apocalyptic world that’s returned to the forests of the past. She and her family are pat of the “village” of Central Park, some of the last human beings in a world that was decimated by an unknown “Blight.” The world has rolled right along without most of humanity, returning to a forest covered land that’s filled with hungry beasts, more so than even Prosper realizes. It’s not just lions and tigers out there, it seems, as the beasts of fairy tale lore have come out of their hidden corners of the Earth to reclaim the land they once ruled. Prosper is soon to be in the midst of these Hinterkind, as she and her best friend Angus set off into the wilderness following her Grandfather, the village doctor off to rescue another human outpost. Angus has a secret of his own, and it’s that metaphor that gives the book depth. Angus is gay, though he’s not open about it, and more than that, Angus has grown a tail. Not an insubstantial one, either, but a full length tale as long as his legs, with no understanding as to why. He’s convinced the village will cast him out of they know “what he is”, and Prosper is determined not to let her friend face the wilderness alone. Angus’ awkward realizations about himself, and Prosper’s determination to accept him and protect him despite his differences make for a pair of great characters at the core of this story, which is commendable. There is, after all, a LOT going on in this adventure story, but the complex plot is held together well by the depth of the relationship between the two young people at it’s center, making it a series more about real people than the fantastic world in which they live. Hinterkind is reminiscent of the fabulous Saga series in that way, and will be a book to watch for some time to come. 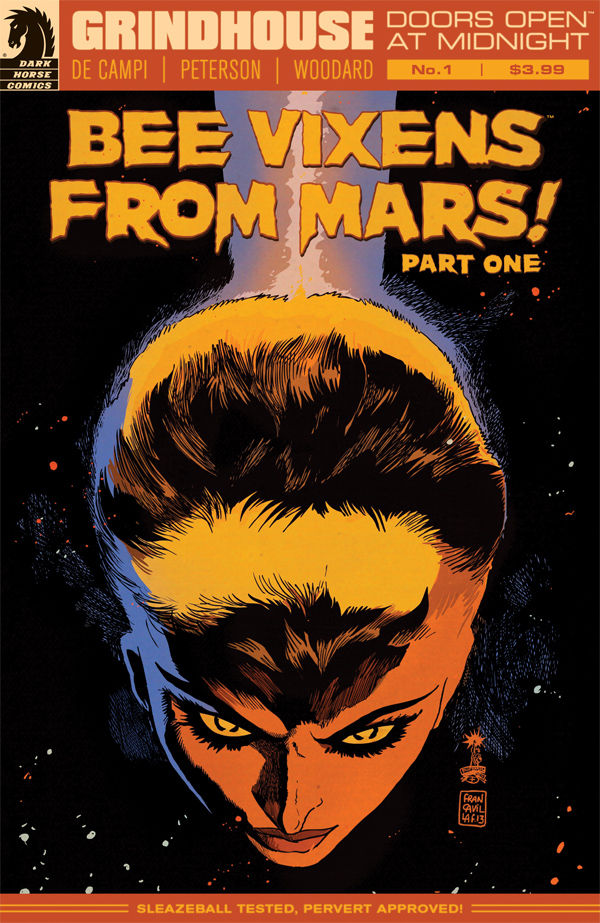 Dark Horse Comics kicks off a fascinating new concept with Grindhouse: Doors Open at Midnight #1. Advertised on the cover (by legend Franceso Francavilla) as “Sleazeball Tested, Pervert Approved!” this is a true B-movie style comic that will present four two-part stories and promises tons of gore, sex and violence in true midnight movie fashion. The first arc “Bee Vixens From Mars” certainly delivers on its promise. Written by Alex De Campi and illustrated by Chris Peterson, “Bee Vixens” is the raucous story of an eye-patched sheriff’s deputy as she uncovers the mystery of some alien honey that’s turning the women of her little town into violent bee-aliens intent on impregnating the town’s male population with their otherworldly eggs. The book rides the fine line between sexuality used as power and full on exploitation that grind house movies are so famous for, and it’s tons of fun. 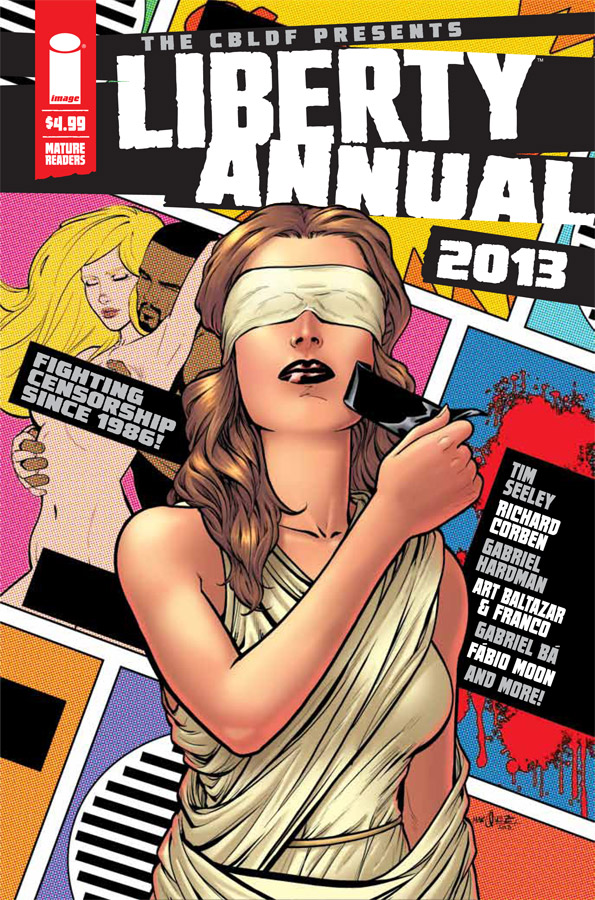 There’s another well made anthology on the shelves this month, this time form Image Comics. It’s CBLDF Liberty Annual 2013, a collection of tales about censorship and rebellion, raising money for the Comic Book Legal Defense Fund. Included are stories that feature some indie comics characters we know ,like Captain Midnight and The Hoax Hunters, and some original tales that should bring both a smile and hearty fist pump of righteous anger to readers. The Hoax Hunters (who actually protect real life myths like Loch Ness by convincing the public they are hoaxes) are out to set the record straight for Bigfoot when irresponsible media sensationalism paints him as a villain. Bigfoot’s “Stress Shedding,” is the comedic bright spot of the book. Other stories here shine the light of hypocrisy on the internet and mainstream media alike, including Leah Sottile and Emi Lennox’s “Punk Rock is Out to Lunch”, a call to arms following the example of Russian political punk rockers Pussy Riot. It’s one of the two best stories here, the other being a fantastic tale slashing through the fourth wall, featuring the characters from Tim Seeley’s Hack/Slash. Fan favorites Cassie and Vlad are out to destroy your sense of reality as well as ideas of censorship in comics as they literally peel back the page to get at the censor himself and his “little black bars.” That’s not to say the rest of the book suffers, as the collection is solid throughout.