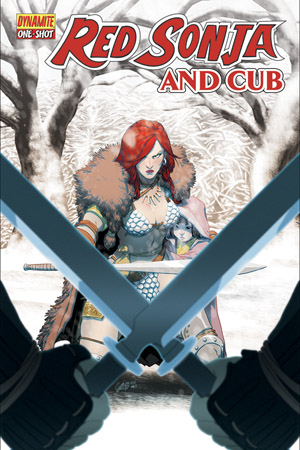 In Dynamite One Shot’s Red Sonja and Cub, written by Jim Zub with art by Jonathan Lau, Sonja is an iconic powerhouse in her own right, but it’s really the young girl Kazuko who steals the spotlight. Sonja is wandering in a foreign land when she encounters a family under attack. The Red Devil does what she does best, and soon learns that the girl she saved, Kazuko, is on her way to her wedding. She is destined to marry a young man of the warring clan that just assassinated her parents, to end an ages old conflict between two mighty houses. Sonja feels Kazuko is “a political pawn … some kind of chattel” but Kazuko disagrees and is determined to protect her family, as well as their long time enemies, by ending the conflict. On their perilous journey Sonja teaches Kazuko a warrior’s way, instructing her in handling both a weapon and herself. When the ceremony occurs and Kazuko and her betrothed are attacked yet again, it’s the young bride herself who ends the conflict, using the weapon Sonja gave her to bind the ties of blood with her husband to be. While agreeing to an arranged marriage out of political and familial duty isn’t exactly a feminist idea, Kazuko is a determined character, and the choices that define her are her own. She wants to be married to her rival clan’s son, and she is determined that the violence that has marked her short life should end by her doing. When Sonja offers to take the girl along on her adventures, telling her she need not be controlled by others, Kazuko declines, telling Sonja, “I will honorably serve my family, but that does not mean my spirit is tamed. You have taught me much.” Kazuko is the heart of Zub’s story (no matter how many appendages Sonja severs along the way) and this is another Sonja story that is definitely worth a read. 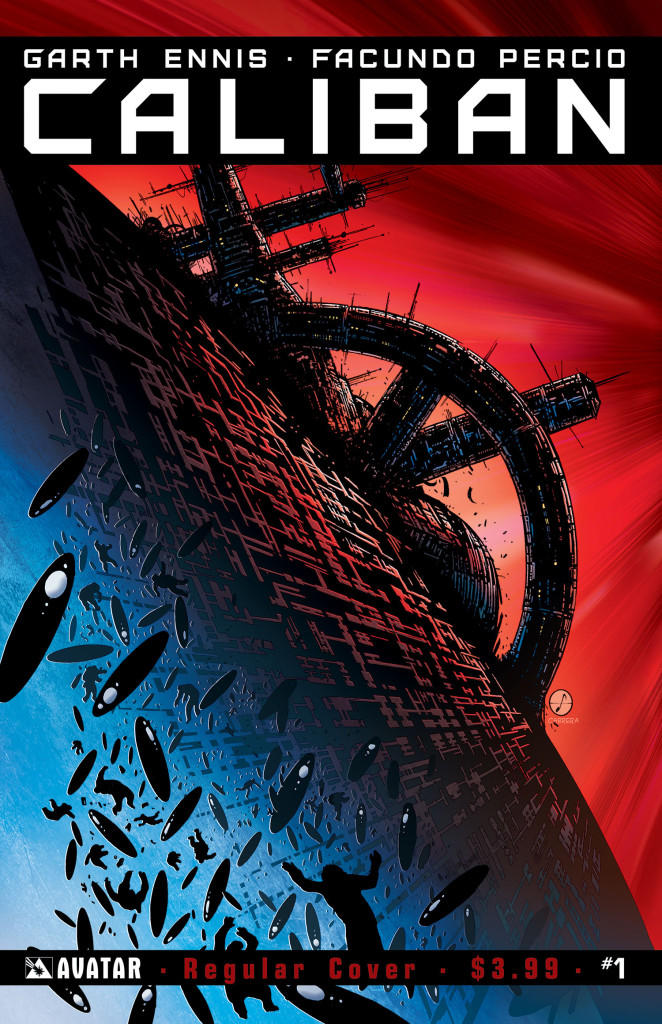 Garth Ennis and Facundo Percio have a new sci-fi horror series Caliban #1, featuring a pair of female leads, the dreamer Nomi and the no nonsense leader San, a woman of (based on context clues) British Indian descent. It’s rather refreshing that in a future time, a person of color is depicted and the writer doesn’t feel it’s necessary to make an overt cultural reference to define her, right of the bat. She’s obviously darker skinned than her colleagues on the deep space mining vessel The Caliban, but San isn’t defined by her race or her gender, and she is first and foremost a pragmatic and compassionate officer. That pragmatism is put to the test when the Caliban encounters trouble while hauling sleeping passengers to mine the richness of space that humanity has long considered to be devoid of life. That idea comes to a crashing halt when the ship collides mid warp with an alien vessel, literally fusing the two ships together. It’s a frightening and rousing space disaster epic, and credit really needs to be given to Percio for how well it’s illustrated. It’s also a great take on familiar character archetypes. Nomi and San owe a great debt to the likes of Ellen Ripley, but they have their own unique perspectives as penned by Ennis, and while the story itself really takes hold, they are characters that will stay with you you as you wait for the next issue. 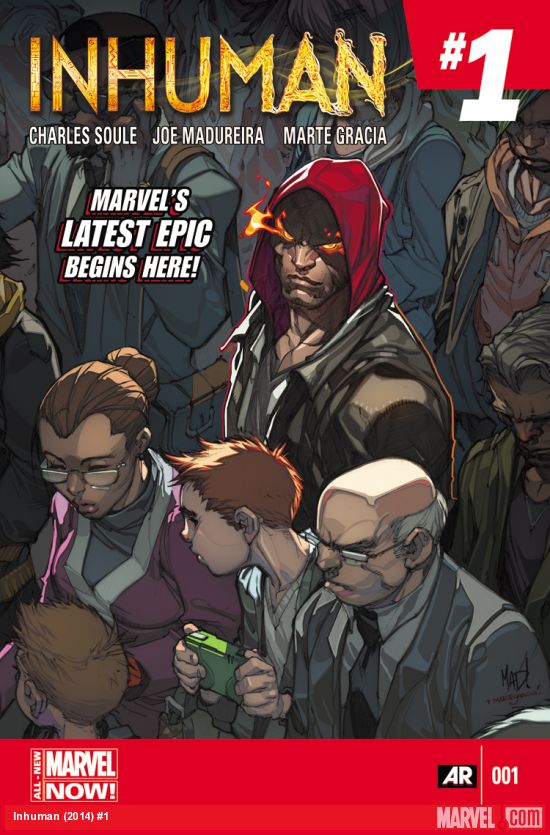 The obvious cultural nods are present in Marvel’s latest, Inhuman #1, written by She-Hulk’s Charles Soule, with art by Joe Madureira and Marte Garcia. First, if you aren’t a recent Marvel reader, you’ll need some context. This book’s starting point has appeared in lots of other Marvel books since the end of their big crossover event Inhumanity. The Inhuman King Black Bolt detonated a Terrigen Bomb that spread the Terrigen Mist across a large portion of the earth. This mist awakens dormant Inhuman DNA in people, causing them to enter a cocoon, only to emerge as super powered beings. This is something that the Inhumans have been doing on purpose for centuries, as an offshoot of humanity that was experimented on by aliens in pre-historic times. Got all that? OK, so when it happens to a young man named Dante (who of course develops flame-based powers) he is hunted by the Inhuman religious zealot named Lash, who follows a violent path and believes only certain powerful Inhumans should be allowed to live. Dante is rescued from Lash by Medusa, the Inhuman Queen, and where his loyalties might fall in the coming conflict seems to be the crux of the story. Dante is an interesting young man, alone taking care of his pregnant sister, whose husband passed away, and his mother dying of old age. There are a few obvious Catholic symbols in the family home – a cross, a rosary – but Dante and his sister Gabriella seem informed by their cultural and religious identity rather than defined by it, making for well-rounded, complex characters. 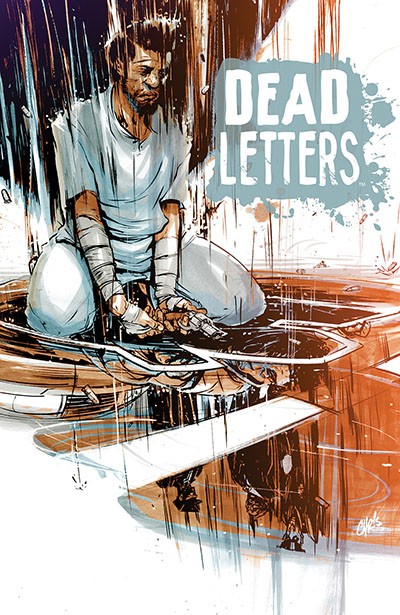 Dead Letters #1, written by Christopher Sebela and drawn by Chris Visions, is the story of Sam Whistler, a man with no memory. He awakens in a hospital bed in a strange city and soon learns that there are bad men out to do him harm. While he can’t remember his name (someone else tells it to him) or how he got here, he does seem to be able to recall the skills that allow him to fight back and escape, worrying he might be a bad man himself. Sam deftly fends off one attack after another, only to eventually encounter a woman named Maia, who tells him her boss has left her in charge of this strange and violent city. She also reveals to Sam that that boss is in fact God, and the city isn’t a city at all, but rather Purgatory, or what the locals call simply, “Here”, a violent and dangerous place. How Sam fits into all this is yet to be revealed, but it’s a noir mystery on a scale grander than just about any other. Sam isn’t necessarily someone you’d want as a role model (he’s in Purgatory, after all), but he’s a complex character of color, at the heart and center of his own story, rather than serving as someone’s sidekick. He’s a man of action, and a confused man, of course, and the cover hints at a sadness that has yet to be explored in the story. However, a story of this magnitude has a lot of room for character development, and we’re hoping for it to be great. 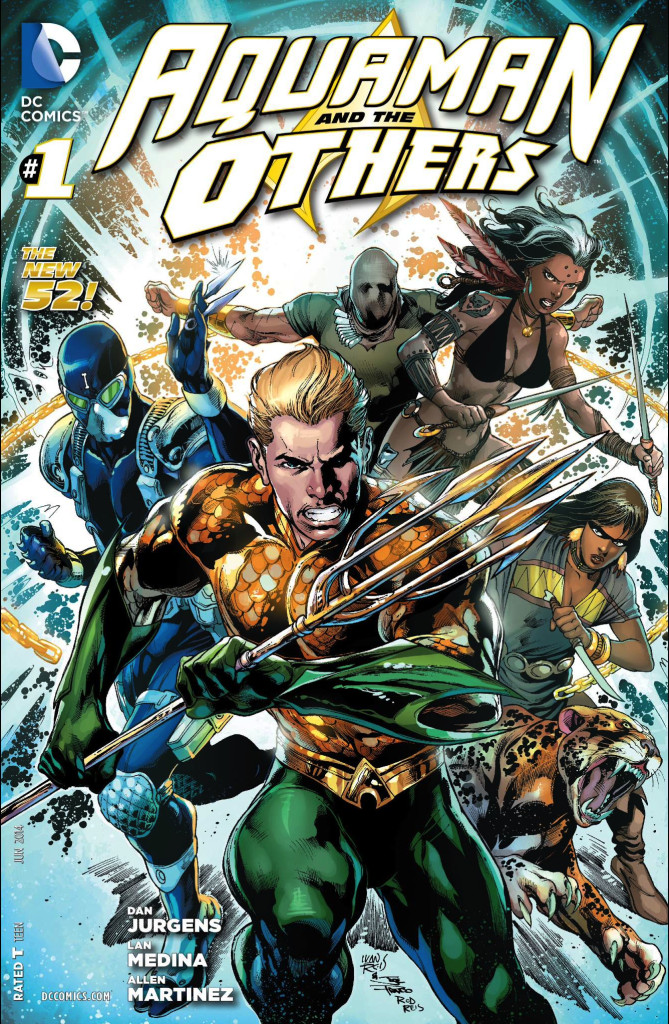 DC’s latest New 52 title, Aquaman and the Others #1, is a let down. Frankly, that title itself is a little insulting. (“This story’s about Aquaman, really, the rest of these characters aren’t all that important. They’re just the other people hanging around.”) While Aquaman is, of course, blond and white, he’s got a supporting cast here is of various ethnicities, and some of them aren’t handled all that well. We’ve got a man named Dominick Torrez, known as the Prisoner-of-War and whose disturbing costume consists of a literal bag over his head. The Others also includes two indigenous women, and that’s where things get worse. One is Sky Alchesay, a First Nations woman with magical abilities. She sports a traditional costume as a hero, but even in her plain clothes she is never depicted without feathers in her hair. While it’s great to be inclusive, there are hints that Sky is treated as a token character. In a single issue profiling four different characters, it’s hard to give her enough face time to make much of her, so hopefully in the long term she’ll become someone to be respected for her abilities and decisions, as well as her heritage. Sadly, it’s tough to say the same about Ya’Wara, who hails from the Brazilian Amazon. She’s a member of the Tapirapé tribe, an indigenous culture largely removed from European influence until about 1910. (This is not depicted in the comic, I had to look it up.) She communicates with jungle animals, and has a large black panther as a companion and weapon, basically, and is a sort of dark skinned Shanna or Tarzan character. Ya’Wara consistently appears in a bikini, and although further researching of the Tapirapé people shows that they almost never wear clothing at all, and haven’t for centuries, without that background being given in the story, it’s difficult to view Ya’Wara’s appearance as not sexualized. In fact, she seems to have little that defines her outside of her jungle heritage, but her overt sexualization is the most disturbing aspect of the character. All these factors combine to leave a bad aftertaste from a book that might have been trying to provide cultural inclusion in the DC Universe, but got it wrong on most counts.