I’ll admit, I’m being a little unfair. There have been a handful of legitimately good episodes throughout what has been a generally mediocre first season. “T.R.A.C.K.S.”, however, one-ups most of them by really drawing on the individual personalities and motivations of the agents. Along the way, we’re treated to a somewhat sophisticated POV episode structure, genuine badass moments for nearly everyone on the team, and an actual raising of the stakes, which has been one of the most common complaints against the series.

Agent Coulson’s jovial coolness has, understandably, begun to crack in the wake of his capture and torture at the hands of CENTIPEDE in “The Magical Place“. It’s explicitly spelled out by Grant and May that Coulson is out for blood and willing to put the team in harm’s way to run down even the slightest of leads, which is how we find the Agents undercover on a train from Italy to Croatia.

For reasons that are essentially handwaved, billionaire slimeball/recurring villain Ian Quinn is transporting a major high-tech purchase by train. Never mind that, since he’s based in Malta, land transport is basically pointless and that Verona, Italy isn’t exactly a tech hotbed. Let’s just assume that the showrunners wanted a train through an international locale that could easily be faked by driving up to Santa Barbara. Unfortunately this means there are a few ridiculous accents. I said the episode was really good, not perfect.

Awkward setup aside, it’s rather cleverly built. The teams are broken up into duos, telling each story point from one point of view. Each scene ends with a cliffhanger, only to double back and follow the events from another pair’s perspective, moving the story forward by a few minutes. While it’s been done before, I have to admit that slowly doling out answers until a clear picture is formed is a pretty effective strategy for keeping me engrossed as a viewer.

The first few moments have the pairs playing off each other: Grant and May’s supremely uncomfortable bootie-call relationship (where May’s dismissiveness makes Barney Stinson look clingy); Syke and Fitz’s decent American accent competing to see who talks fastest; Coulson trying and failing to impress upon Simmons that acting natural is essential to working undercover. It’s all very amusing until the op goes south, the train vanishes, and the Agents lose contact with each other. 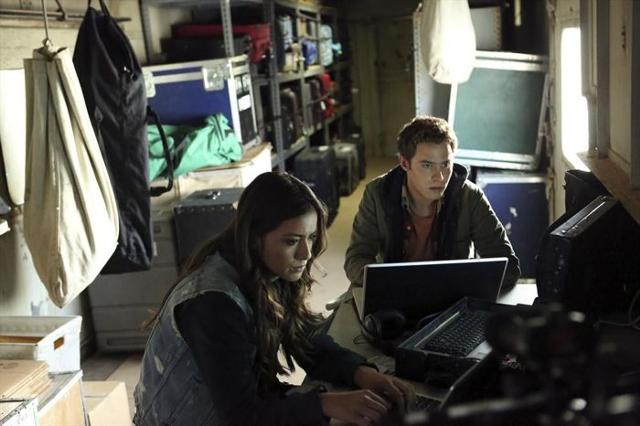 The episode shines in showing how the team acts in the midst of chaos, almost making the slog of the earlier part of the season seem worth it. In spite of some iffy moments, we have a decent sense of what drives each character and who they are at their core.

Coulson leaves Simmons in the relative safety of the passenger car when the comms go down. Though he may lose sight of it from time to time, his priority is the team’s safety and he has to be sure they’re okay. In this episode, Ward’s supreme competence saves Coulson and Simmons, but completely fails him any time he’s dealing with anything not in the SHIELD Black Ops training manual. May is a swirling vortex of bloody death, not because she doesn’t care about people, but because she cares too much. (The swirling vortex of death, by the way, means that May once again gets all the best stunts.) Simmons once again demonstrates that she’s probably the most brave member of the team. Even when she’s scared and completely out of her depth, she doesn’t think twice about giving her life to protect her friends. And while Fitz doesn’t get a lot of screen time, it’s clear that he’s developed a steely coolness under pressure over the course of the season. As for Skye… Well, she’s always asking the questions, always acting rather than thinking it through, and always narrowly making it out alive. This time, she finds out first hand that it’s not always possible to get the bad guy to spill the master plan.

The episode works because it stays true to its characters, allowing them to behave logically. It doesn’t hurt that every commercial break leaves the Agents in increasingly difficult circumstances. It might not have been the world-shattering stakes that fans have been asking for, but when you can’t go big, it can be just as effective to go personal. “T.R.A.C.K.S.” also brings us closer to some kind of resolution on the Clairvoyant/CENTIPEDE/Mike Peterson storylines, turning the now horribly scarred and mutilated Peterson into an MCU version of the cybernetic, remote-controlled comics assassin Deathlok. This is kind of a big deal.

Turning Mike Peterson into Deathlok is the first time a character from the comics has explicitly made the jump onto the show. Basically, he’s what fans have been begging for since day one: a lesser-known superhuman (or more than one) being brought front-and-center to expand the scope of the movie universe while honoring the source material. He’s not just a credible threat, but an overwhelming force on par with, say, the villains of the Iron Man or Captain America movies. Unlike most of the prior superhumans on the show, he’s not someone who’s confused, frightened, or undone by his powers. At his core, he’s also a decent guy, meaning that it’s highly likely that this Season One villain could become a Season Two hero. Finally, the sly evolution of Mike Peterson into Deathlok is a welcome nod to the comics, where there have been various Deathloks, and nearly all of them have been people of color (bringing the number of Black superpeople in the MCU up to… three).

While I would have loved it if the show’s Deathlok design had a little more panache – the most notable difference between his current state and how Mike appeared in the pilot being a bunch of gnarly scars and a cybernetic leg – it’s still a welcome sight to have someone on the show who is visibly different from baseline humans. Well done, show. “T.R.A.C.K.S.” is a well-structured episode that uses character to advance plot, moves the mythology of the series forward, and gives fans a taste of what they’ve been asking for all along. Now let’s see if Agents of S.H.I.E.L.D can do it again.