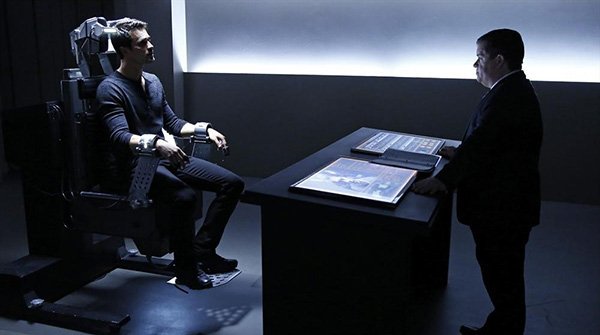 Just so we’re clear, I love the new Hydra-Edition Agent Grant Ward. His whole shtick of having a nearly non-existent personality retroactively improves the character, now that we know it’s all been an act. The entire B plot in this week’s episode revolves around the question “How evil is he?” The answer? Pretty damned evil, and also clever, terribly resourceful, and much more fun to watch.

As for the A plot, well, it was primarily Problem of the Week stuff, with a guest appearance by a character that has been often alluded to, but never seen, in the MCU.

This time around, the team sets out to capture one of the escapees from Hydra’s raid on the Fridge last week, a man by the name of Marcus Daniels. His energy absorption and control powers were gained from experiments involving something called “darkforce”. (Because, as Coulson quips, nothing bad ever came of working with something called “darkforce”.)  Now Daniels is out there, snuffing out electric lights and tossing black lightning bolts, and he’s MCU’s well deserved equivalent of a comics baddie called Blackout.

Turns out that Coulson has some history with Daniels, having taken him down years ago, when Daniels took it upon himself to stalk a Portland cellist. This would be the same cellist that was mentioned over and over in Avengers, and we have a name – Audrey Nathan – and a face (that of Whedon regular Amy Acker) to connect to the offhand references.

Audrey still thinks Coulson is dead, while he obviously still has feelings for her and goes out of his way to protect her, but that’s not really the story here. The real story is that no one trusts anyone else, not anymore. Also, Skye’s real name is Mary Sue Poots.

Before allowing Coulson to take Fitz, Simmons and Triplett off to track down Daniels/Blackout, Patton Oswalt’s Eric Koenig insists on putting everyone into a lie-detector machine that even the Black Widow isn’t supposed to be able to beat. We get a lot of interesting little character bits. Triplett is the grandson of a Howling Commando (from Captain America). May might have been informing on Coulson, but she cares about him deeply. Fitz is definitely in love with Simmons. And Simmons watches Doctor Who.

The real highlight in this sequence is a face off between Koenig and Ward over the lie detector. Ward struggles to find ways to tell just enough of the truth to pass the test, and Koenig looks a lot more intimidating than any man with such a tiny handgun and such a huge obsession with lanyards has any right to be. As far as I’m concerned, while the episode was pretty good, it was downhill after this sequence. None of the blood, mayhem or special effects measured up to Brett Dalton and Patton Oswalt in a battle of wills. 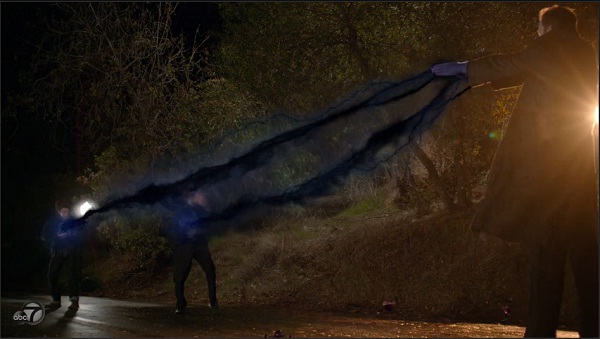 I will also say that I’m not too pleased with the politics of this episode. A big portion of the main plot is built around stigmatizing mental illness (as in, the experiments with darkforce “fried” Daniels’ brain). There is also the Cellist as a damsel in distress, whom Coulson has to anonymously rescue but can never openly love. Yes, it’s nothing new. Yes, it’s very much a standard comic book plot. And, yes, S.H.I.E.L.D. has been known to be insensitive in a TV kind of way. But that doesn’t make it right, especially when there’s much more interesting stuff going on back at base.

May simply abandons the team after she and Coulson have it out, which leaves Skye and desk-jockey Koenig alone with Ward. Ward, meanwhile has only two priorities: decrypting the hard-drive with the team’s research for Garrett and not getting caught in the process.

After such a close call with Ward during the lie detector sequence, I would have hoped Koenig would be more careful around him. But, well, he puts a lot of stock in his lanyards. As for Skye, she finds herself on the receiving end of a seduction effort from Ward that almost works. Given Ward’s straight-arrow act, I’m surprised he got that far.

Like every episode so far in the second half of the season, “The Only Light in the Darkness” ended on a couple of minor cliffhangers. All in all, the episode wasn’t bad, and certainly not as disappointing as most of the Problem of the Week episodes in the first half of the season. Given how little remains of season, though, I’d have hoped that the showrunners would have dedicated themselves more fully to the mythology. Plus, the whole “Must save the girl from the affections of an unhinged villain” thing? Really? Again? I was beginning to think you were better than this, S.H.I.E.L.D. Regardless, watching Ward while knowing that he’s a lying, cold-blooded killer makes the episode’s failures worth tolerating.