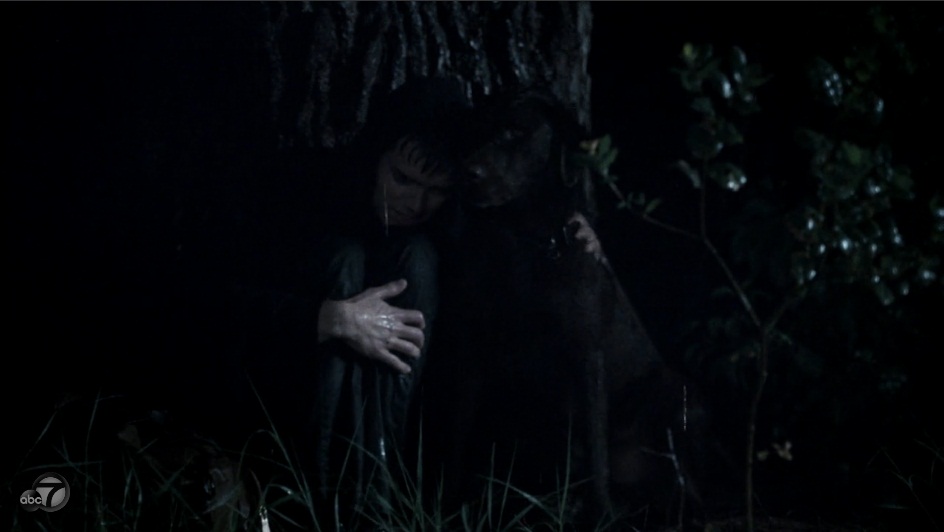 Is Grant Ward a sociopath with a plan, or John Garrett’s well-trained pet? That’s the question that “Ragtag” set out to answer. By delving into Ward’s past, Garrett’s true goals, and Fitz’s unshakable faith, this episode attempts to humanize Ward in a way that neither he as a character, nor I as a viewer, found especially welcome.

I have to say, I’ve grown attached to Evil Ward. The fact that there was so little to him before he revealed himself as Hydra makes me hope for a complex and interesting, but ultimately irredeemable, character. Going from good guy to bad guy to good guy again, while it would be typical of the ways of television, would ultimately cheapen his character. Which is not to say that “Ragtag” goes this route, but it skirts way too close for my taste before pulling back.

A big part of the episode is dedicated to flashing back to Ward’s relationship with Garrett, starting way back in ’99, with teenage Ward being held in a juvenile detention facility for escaping from his military school to burn down his family’s home (after making sure that his brother was still inside). Garrett takes the kid in, drawn in by his combination of anger, military prowess, and lack of restraint – just the kind of recruit Hydra needed.

Still, the young Ward held on to some shred of humanity and decency. Garrett’s job was to tear the kid down and rebuild him as a merciless survivor. His training regimen included abandoning Ward in the middle of nowhere for half a year with nothing but a dog and some clothes. (After taking the time to sneak in some insults and subtle emotional abuse, because why not?) When we find out that the chocolate Lab’s name is “Buddy”, I started counting down the minutes until Garrett made Ward kill the dog. It’s telegraphed pretty much instantly, but one has to allow TV shows their shorthand from time to time.

Besides, we see Buddy because he’s also a reflection of poor young Leo Fitz. Everyone else on Coulson’s team has accepted that Ward is bad, bad, bad, yet Fitz just can’t accept that. The two had adventures together. Ward saved both his and Simmons’ life on multiple occasions. Fitz just isn’t ready to write off someone he considers a friend. It’s not much of a spoiler to say that there will definitely come a moment in the episode when Ward is again called on to execute the sad-eyed puppy.

The present day finds Coulson’s team doing some real spy work, having tracked down the corporate front used by Hydra and slimy industrialist Ian Quinn to turn Mike Peterson into Deathlok. Lacking the high-tech support of S.H.I.E.L.D., the team relies on ancient postwar tech dug out of Agent Antoine Triplett’s grandpa’s closet. Turns out ol’ grandad was a Howling Commando (from Captain America: The First Avenger) and early member of S.H.I.E.L.D. The old tech is in the charming ’60s spy mold, where a cigarette is actually a laser, a joy buzzer is an EMP, and a hair-dryer fires mind-control rays. The gearing up sequence, and much of the modern-day sequences in this episode, have that combination of action and levity that works so well in the MCU movies but has often been absent on the show. (As an aside, I love Agent Triplett. Even as a trained, tough as nails field agent, he radiates a relaxed warmth, charm and humor that Ward never had. I really hope he survives this season.) 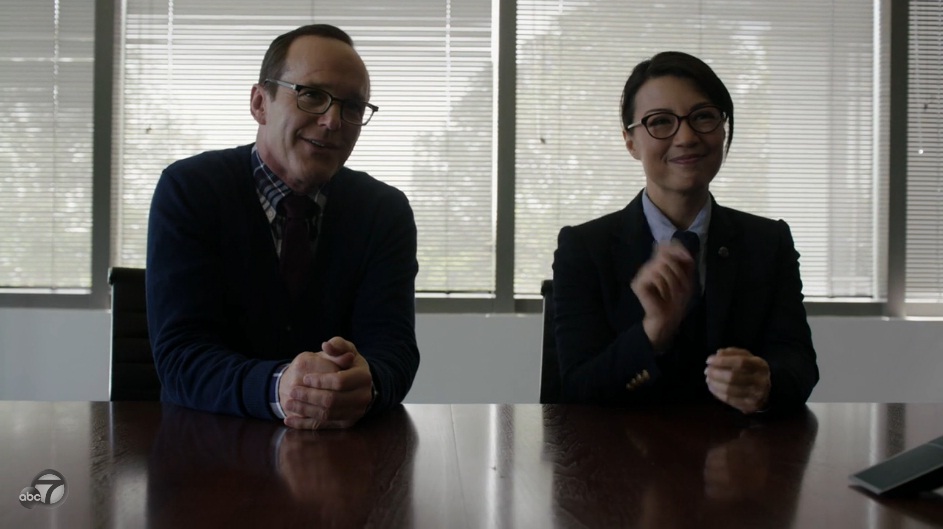 The team’s visit to evil corporation Cybertek’s headquarters (in Palo Alto!) is a rough affair done by the seat of the pants, and it’s just a joy to watch: from the team struggling with Cold War-era equipment, to Coulson and May pretending to be tech nerds, to the spot-on portrayal of condescending Bay Area tech geek interviewers. The entire sequence makes me hope for DVD outtakes once the season is over. While the team is able to make some progress, they’re largely stymied by analog technology. The entire mission results in only one file transfer, but it’s a bit of a doozy (and a great visual gag, to boot).

The team discover something that makes Garrett’s motivations crystal clear: Garrett is a Deathlok. The first Deathlok. Injured and left to die bye S.H.I.E.L.D. twenty-five years ago, he was rebuilt to keep his organs from failing (not unlike Mike Peterson, or Tony Stark for that matter). While Alexander Pierce may have been all about the high-minded ideals when he revealed Hydra’s existence in The Winter Soldier, Garrett joined Hydra just so he could stay alive long enough to screw S.H.I.E.L.D. over. Given his brutal pragmatism, it would have been entirely out of character for his plans to have much in the way of ideology, honestly.

Everything that he did as the Clairvoyant – developing CENTIPEDE super-soldiers, refining the Deathlok technology, working out the mystery of Coulson’s revival – wasn’t about power, or conquest, or even money. It was about survival and, to a lesser extent, revenge. And I have to say, as far as supervillains go, it’s an unusual and refreshing raison d’etre.

Making things on his side even more interesting, the dynamics of Garrett’s group of ne’er-do-wells undergo a couple of subtle but significant shifts in this episode. Ian Quinn returns and, having been forgiven for his earlier mistakes, he is now back in Garrett’s esteem and able to function as a powerful businessman once more. Mike Peterson seems like he’s getting closer and closer to rebelling, while remaining Hydra’s most effective weapon and potential moneymaker. Reyna has grown disenchanted with Garrett’s lack of interest in anything beyond immediate survival, yet has managed to make spectacular breakthroughs. And all three of them – despite how frayed their ties to Garrett are becoming – are still more effective and more appreciated than Ward.

Which leaves Ward as little else than an old, loyal dog that has outlived his usefulness. He’s still a true believer, still behind Garrett 100%, and still completely lacking in remorse over his actions. But he just seems to not be as… happy about it as he once was. Garrett spends the entire episode pushing him away, but before the end, he’s got one last thing for him to do. Acting on the information they got from Cybertek, Coulson’s team is just one step behind Garrett, but circumstances conspire to leave FitzSimmons in enemy hands. All Ward has to do is put down the loyal, sweet little science team. 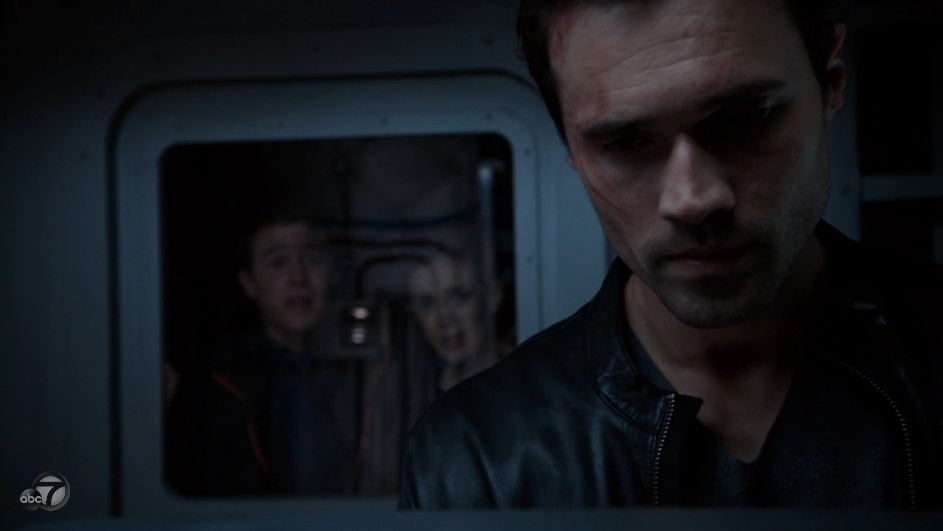 With only one episode left in the season, Garrett is holding all the cards. He’s nearly transformed his CENTIPEDE soldiers into an army of cyborg monsters. He’s about to make the deal of a lifetime. And, oh yes, he’s just had his body jumpstarted by alien superjuice. His plans are going gangbusters, but in his moment of triumph, his team is on the verge of falling apart from inside. I can’t wait to see whose loyalty fails first.