Agents of S.H.I.E.L.D. Need to Go Back to the Academy

I’ve just caught up on Marvel and ABC Studio’s grand experiment in entertainment, Agents of S.H.I.E.L.D. and, unfortunately, it’s not yet lived up to its promise or pedigree. (Although the most recent episode was a step in the right direction, but more on that later.) As someone completely devoted to the Marvel Cinematic Universe, I’m in it for the duration, so I really hope that the series becomes less of a slog.

Something like Agents of S.H.I.E.L.D. hasn’t really been attempted before, though anything the MCU does at this point is breaking new ground. The series is meant to expand upon the movies and serve as a bridge to keep viewer interest high between tentpole films. Given the multi-billion dollar business that the Marvel films have already become, S.H.I.E.L.D. has a built-in audience and the potential to be a huge moneymaker for Disney/ABC/Marvel. The show features fan favorite Agent Phil Coulson (Clark Gregg), and has already included cameos from Avengers stars Samuel L. Jackson as Director Nick Fury and Cobie Smulders, Fury’s second-in-command Agent Maria Hill. 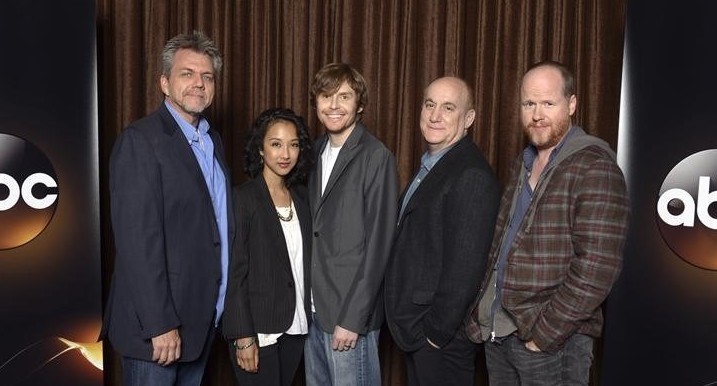 The series is created by geek icon and Avengers writer/director Joss Whedon, with his go-to writers Jed Whedon and Maurissa Tancharoen. The husband and wife team were Whedon’s unsung MVPs on Doctor Horrible’s Sing Along Blog and Dollhouse, as well as a number of Mutant Enemy comics projects, and they also contributed to the breakout Starz series Spartacus. Yet, as a solid team working on the closest thing TV has to a failure-proof project, so far they’ve managed to mostly pull defeat from the jaws of victory. (Hark, there be spoilers.)

As we’re only three episodes in, and it was just announced that ABC picked up another nine episodes for a full season of twenty-two, there is still plenty of time to right the Helicarrier’s course. (Although the TV team gets a sweet airplane base rather than the OH MY GOD SO AWESOME Hellicarrier.) From the beginning the show was facing a major issue, riding in on an unprecedented wave of hype and audience goodwill that made the premiere the highest rated TV drama in four years. No show, no matter how good, could live up to that level of anticipation, and the pilot episode was only just decent. 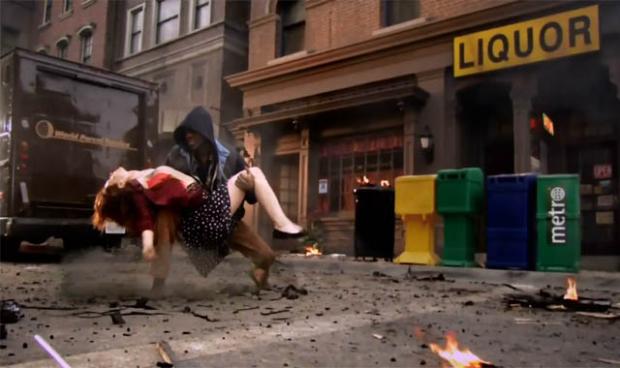 When it comes to world-building and establishing links to the movie series, the premiere did a lot of things right. There is some lovely tech (both for heroes and villains) consistent with what we’ve seen in Avengers and the Iron Man series; there are some nice direct callbacks to the films (most notably the use of movie MacGuffins Chitauri technology, Tesseract Energy, Super-Soldier Serum and Extremis); Cobie Smulders delivers some good post-Battle of New York exposition and Clark Gregg is in fine form. The addition of Ming-Na and Chloe Bennet to the regular cast, and appearances from Whedon alums J. August Richards and Ron Glass, raise the number of people of color in the entire MCU up from a completely unacceptable four (Fury, Iron Man‘s James Rhodes, and Thor‘s Heimdall and Hogun the Grim) to a still pretty bad eight.

The pilot goes fairly big for TV (even if it’s still kind of rinky-dink compared to its source material). J. August Richards plays the episode’s Problem-of-the-Week, Mike Peterson (not Luke Cage, unfortunately), a former factory worker caught in the middle of an investigation into an explosion that leads to some nasty Extremis-based science. Unfortunately, the whole thing lacked in the suspense department, and I never felt that the stakes were all that high, even with a final showdown that threatens to destroy an LA landmark. Plus, although previews seemed to imply that Mike Peterson/new heroes would be a major part of the show, he gets relegated to the Secret Government Warehouse at the end of the episode. So no sneaking supers onto the team, it looks like. 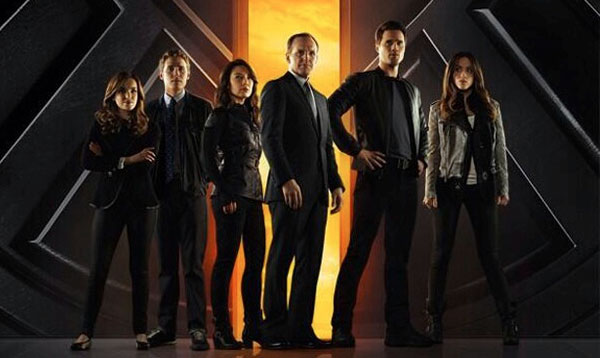 Outside of Gregg’s Coulson, I wasn’t thrilled with most of the cast. The normally excellent Ming-Na isn’t given much to do as the grizzled, reluctant warrior Agent Melinda May,  although it’s nice to see a woman playing that particular cliché. Brett Dalton’s square-jawed lone wolf Agent Grant Ward doesn’t seem to be sure whether he wants to be Captain America or Wolverine, embodying the most irritating aspects of both. Iain De Caestecker as Leo Fitz and Elizabeth Henstridge as Jemma Simmons are too wacky-cute for elite agents, with Science Team Fitzsimmons’ scenes usually being comic relief, Star Trek level technobabble, or both.

But I reserve special scorn for Chloe Bennet’s incredibly annoying, miscast hacker-ingenue Skye. Meant to embody Anonymous-style hacktivists, she instead comes off as a flippant, smarmy pseudo-anarchist spouting outdated internet buzzwords. (So I suppose the outdated internet buzzwords are the most inaccurate part.) We’re supposed to believe that Coulson wants an outside perspective, but not even the famously cavalier Tony Stark would want her anywhere near a world-shaking op. Worse yet, she seems to be Coulson’s co-protagonist. Whedon’s prior shows have put young women in front and center roles, but Bennet lacks the easy charisma of a Sarah Michelle Gellar, Summer Glau, or Eliza Dushku. Where they were able to play flawed young characters who were often out of their depth, without coming off as uncaring or immature, Skye is more Dawn than Buffy.

Episode 2 (“0-8-4”) compounds the problems with Mutant Enemy’s (unfortunately) trademark lack of racial and cultural awareness. Whedon’s shows have long been excoriated by social justice-inclined geeks for being terrible when it comes to dealing with people of color. (Please see: Kendra on Buffy, Gunn’s first year or so on Angel before he became a real character, the complete lack of Asian characters in the Chinese-speaking future of Firefly.

) “0-8-4” is S.H.I.E.L.D. lingo for “unidentified technological doohikey”, the last of which was a certain hammer whose name sounds like “meow-meow“. The team takes off to a remote jungle temple in Peru to appropriate the thingee for the good of all mankind, but especially America. Ho boy. 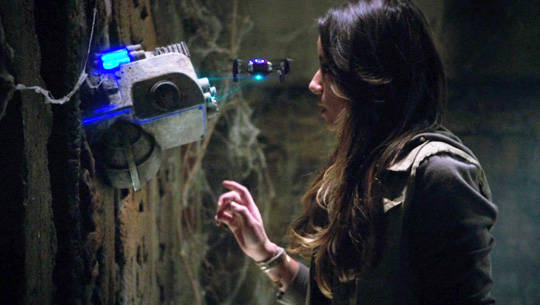 The “0-8-4” in question. Why are you letting Skye near the mysterious evil device? Why? [via: Project Fandom]

The episode lost me within the first few minutes because of the factual, cultural and historical inaccuracies that could have been avoided by spending just a few minutes on Wikipedia. Frankly, this is something that happens all the time in entertainment, but that doesn’t make it right. The “Peruvian jungle” looks like northern Mexico with some added ferns; the supposedly “Incan” temple is a textbook Aztec pyramid with what looks like a Mayan head above the entrance and petroglyphs on the walls. The temple is supposedly “at least five hundred years old“, something that’s meant to be impressive. In a way, it is, since there wasn’t much Incan construction going on around the time, what with being decimated by European plagues and conquered by the Spanish. So I guess it’s impressive that the Incans got together with some architects from the already-conquered Aztec empire to create a museum of Mayan artifacts. And that somehow they included an exhibit by fifteen-hundred year old Nazis.

Oh, and let’s warn the locals about the ancient Nazi device, since they’re dealing with anti-mining rebels armed with AK-47s (though in real life, they’re more like protesters with signs) and Shining Path guerrillas (which were a thing in the 90’s, but these days, notsomuch). The Peruvian Military Police show up with terrible accents, and cacao from a secret valley. Usually, I’m less of a stickler than some, but piling on this much inaccurate and misguided detail just made me want to scream at the TV in the first fifteen minutes. 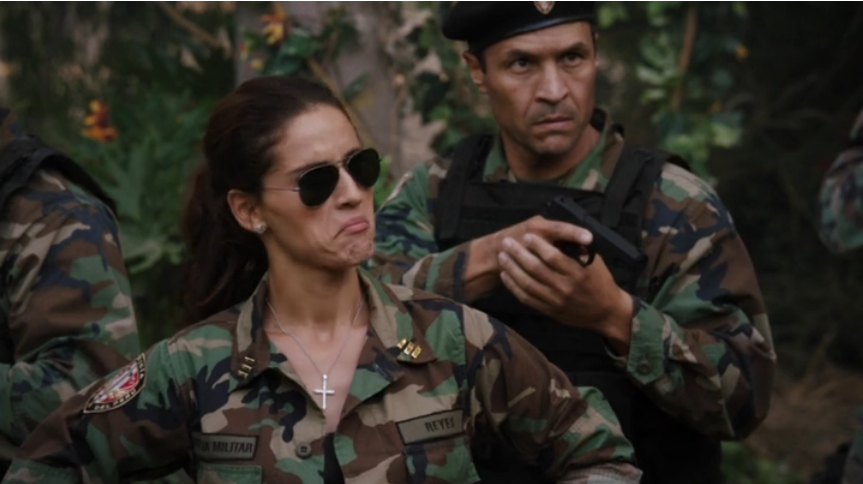 The team’s erstwhile Peruvian Military Police allies turn out to be totally corrupt and willing to kill to get their hands on the ancient Nazi laser cannon thing for… reasons? To keep its anti-capitalist civilians in line, perhaps? There is also some fairly egregious physics and materials science tomfoolery at the climax of the episode, but I’m chalking it up to super S.H.I.E.L.D. tech, where planes fly somewhere near the vacuum of space and life rafts are made from some kind of adamantium-laced polymer. (I’d like my No-Prize now, please.)

I rewatched the episode while writing down my thoughts, hoping to find something I liked. There is a little bit of character building for the call-to-action refusing veteran Agent Melinda May. (Coulson found her working in the Red Tape Department in episode one, but she used to be known as “The Cavalry”, as in, who you call when things go wrong.) Skye still saves the day, but at least has the good grace not to do much else. Beyond that, there is nothing about this episode that is in any way likable. “0-8-4” is a terrible episode, not because it’s borderline racist, but because it’s actively careless. Things do get a bit better with episode 3, The Asset, and we’ll look at it on Monday. Too bad the title seems to refer to both the Problem-of-the-Week, and freakin’ Skye. Oh well, can’t win them all.

1 Response to Agents of S.H.I.E.L.D. Need to Go Back to the Academy