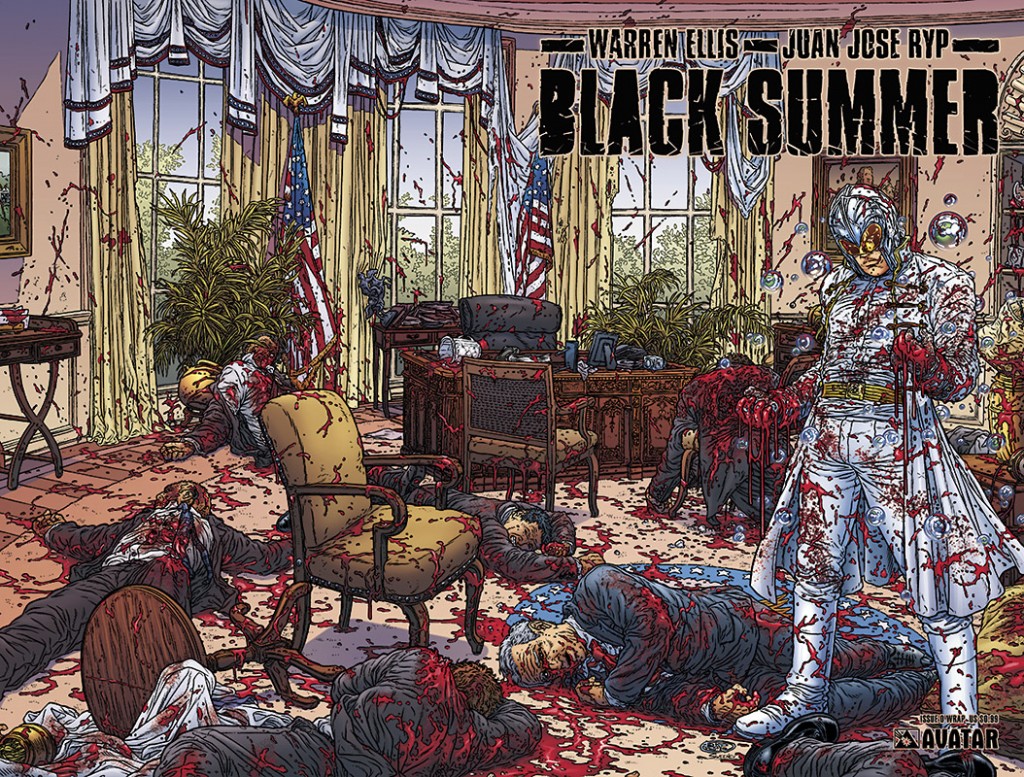 Part of my introduction to Warren Ellis has been through Black Summer, when it was recommended to me by James Sime, owner of Isotope Comics in San Francisco. (I think it’s probably the best comic book store on the planet, but that’s topic for another post altogether!) This book is part of a series Ellis did with artists Juan Jose Ryp (Black Summer, No Hero) and Garrie Gastonny (Supergod). When James described the idea of “How far would you go?” to have superheroes in society, or be a superhero, I was sold immediately.

Black Summer details the rise and fall of a vigilante justice group called The Seven Guns. This team of genetically modified young adults have spent the past several years broken up after a terrible accident left one of theirs dead, and another one with a lost leg. They’re all brought back together when their former “leader” John Horus kills the President of the United States for being a war criminal, a thief, and a liar. (It’s merely implied that the president is George W. Bush). Now, the Seven Guns are on the run, and have to stop John before they’re all caught and accused of backing up his actions.

From what I’ve learned of Warren Ellis, he loves writing strong, badass women and this book does not skimp on those characters at all. The Seven Guns were actually three men and four women – something that is almost unheard of in a superhero team. While we start with one of the women, Laura Flame, having been killed, her death wasn’t a “fridging“; it was not meant to further her romantic partner’s storyline. In fact, the character of Tom Noir is first seen drunk, depressed, and living in squalor, and once he does come back he doesn’t do anything “For Laura”. 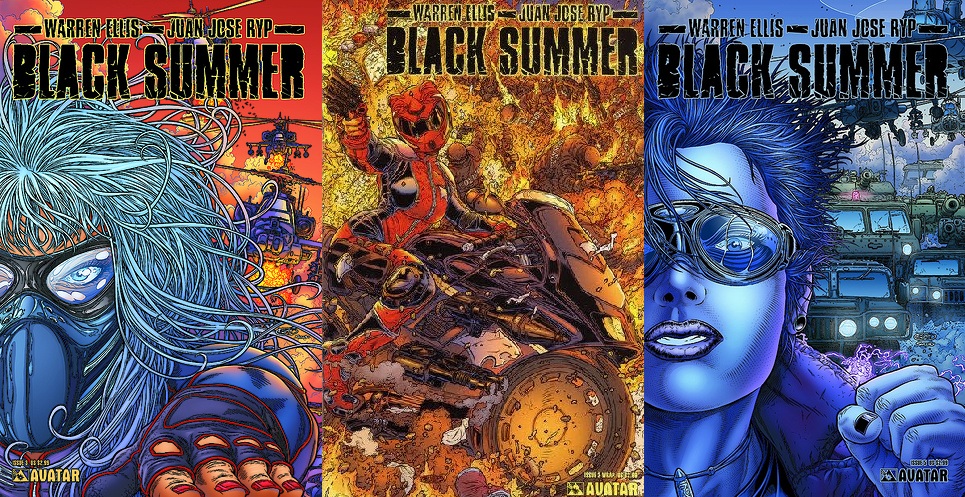 The Women of The Seven Guns - Angel One, Kathryn Artemis, and Zoe Jump

The rest of the women are strong, capable, and level-headed. They don’t need saving because they are the survivors and the ass-kickers. However, Ryp’s depiction of the women is less than empowering, with plenty of T&A poses (mostly for cover art) and a pair of comically large breasts. What I can appreciate though is that each woman on the team has a different face, so to speak. They’re not all just drawn from the standard “hot babe” model but have unique features and varying body types. You see it in the flashbacks to when they were first getting their mods, and in the present day shots as battle-worn soldiers.

Depiction of women aside, I actually really enjoyed Ryp’s artwork on the whole. His attention to detail is stunning, with little flairs and touches to signify things like pressure on objects, or lit screens. Plus, that man draws some frakkin’ DETAILED gore. The blood, sinew, bone, skin… it’s absolutely breathtaking in its complexity. Not for a weak stomach, that’s for sure.

Black Summer is a really enjoyable read. I loved the questions asked, the attention to detail, and the portrayal of women as not only true heroes, but as autonomous persons with lives beyond the men they know (this book totally passes the Bechdel Test). I also loved its companion book No Hero, which I will talk about in more detail in my next post, and can’t wait to pick up the final part of the series, Supergod. I know that this is just my start on Warren Ellis, but I’m looking forward to reading more by him – specifically Planetary. If only the copy available to me wasn’t the Absolute compendium. It’s just really difficult to carry on public transit (although that might not stop me).