Friends With Boys, written and drawn by Faith Erin Hicks, is a touching short graphic novel about adolescence and trying to find a way to fit in. Maggie is about to go to high school for the first time, and while that’s a rite of passage that’s daunting for lots of teenagers, it’s especially scary for her – she’s been home schooled up to that point. For years, she has been classmates and best friends with just her three older brothers, with their mother being their teacher. Now Maggie has to deal with making new friends and feeling left out of her brothers’ lives (they’ve been in high school for a while already), all the while coping with the fact that their parents are now separated. 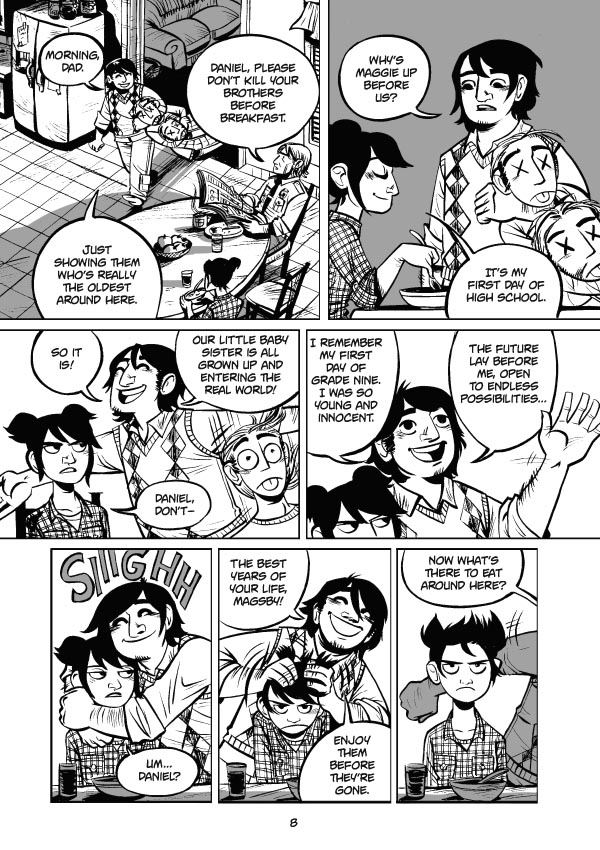 Inspired in part by her own childhood, Hicks writes and draws a story that’s a refreshing look at sibling relationships and coming of age. Maggie’s older brothers are all very different (well, two of them are twins, but their effort to maintain their differences makes for another touching element of the book), but they also have a loving and close relationship with their younger sister. At school, Maggie also befriends a bubbly punk rocker girl named Lucy who immediately takes a shine to Maggie and pretty much insists on becoming her best friend. Maggie expresses how she’s never had a girl for a friend, growing up with brothers, and in bonding with Lucy she finally starts to open up more to the world around her.

Hicks includes little details that help flesh out her brothers as characters, while still keeping the focus on Maggie. Hinting at the male siblings’ life outside the family, the story just reinforces Maggie feeling alone, trying to cope with missing her mother, with having to make new friends, and with the fact – oh yeah, I forgot to mention it – that Maggie is constantly being followed around by a ghost. At one point, Maggie wonders if by growing up a tomboy, who dismissed all things “girly”, she made her mother want to leave. It’s a really heartbreaking thought, a kid taking on blame where none is needed, and Hicks illustrates it perfectly. I also enjoyed the way the Maggie and her friends spend their time together: going to see Alien at a late-night screening, hanging out at the cemetery looking for ghosts and making rubbings of tombstones, having heartfelt conversations while watching a play being rehearsed. All in all, Friends With Boys is a sweet, quick read filled with likable characters, hitting all the right notes of wistfulness and humor.

This entry was posted in books, comic books, YA. Bookmark the permalink.