In a bit of a departure from tradition, instead of seeing a little bit of everybody, this whole episode takes place in King’s Landing, as the city prepares for Stannis’ siege. I think it would be safe to call the result epic. 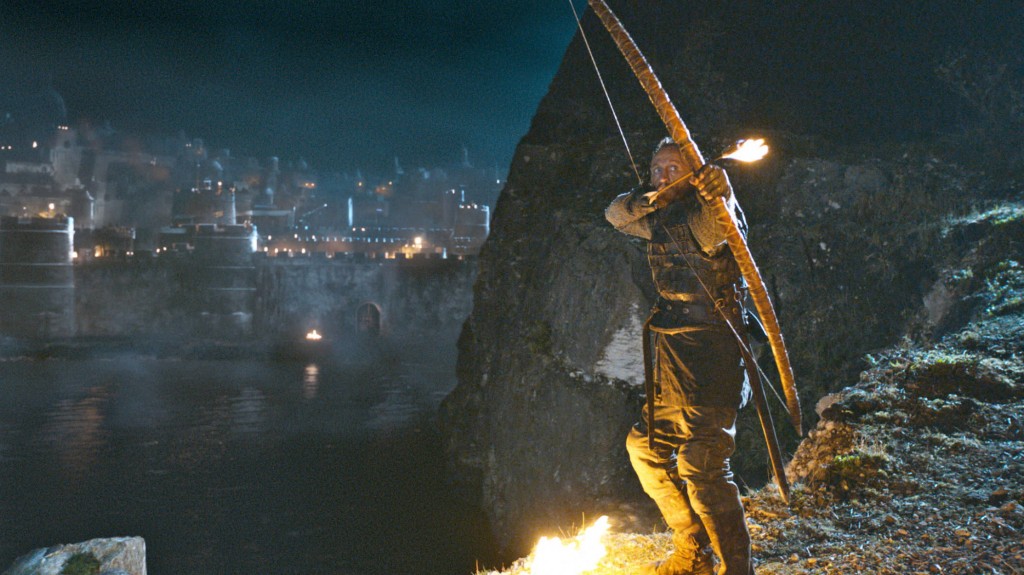 Tyrion shows his aptitude for trickery and strategy. Waiting until Stannis’ ships are in the bay, he releases a ship filled with wildfire into their midst and lights it up with a single fiery arrow from Bronn. The resulting explosion is one of the most incredible visuals of the season, and manages to shrink the likelihood of Stannis’ success.

Meanwhile in the keep, Cersei and Sansa are being held with the other ladies of the court and watched by Ser Ilyn, who Cersei later admits is there to kill them, should the city fall. Cersei gets a bit drunk and tells Sansa the brutal truth of war, claiming that she would rather face a thousand swords than be cooped up with all the praying, frightened women. It seems that Cersei and Sansa’s ideas of what it means to be queen are paralleled in this episode, while Cersei focuses on Cersei and her children, it falls to Sansa to keep the other women calm, and she prays with them and sings with them to soothe their fears. Shae is also introduced to Cersei, but her lack of poise is a quick tell that she’s not quite who she says she is. Thankfully, Cersei’s interrogation of her is cut short by Lancel’s update on the fight.

When Cersei learns that Stannis’ men are marching on the gate, she orders Lancel to bring Joffrey back to his chambers. Literally everybody except Cersei and Joffrey are against it, and when offered a bailout, Joffrey unsurprisingly leaves his post on the battlements and hurries back inside, leaving the men to wonder why they should fight at all. Tyrion, though rather unprepared, seizes the moment and rallies the men to the cause, with his perfectly irreverent and blunt line, “Those are brave men knocking at our door… let’s go kill them!”

In the ensuing battle, lots of people die in bloody, burny ways (including, it seems, poor Ser Davos, blown off his ship by the first explosion of wildfire.) Tyrion manages to get at least one kill before unexpectedly getting his face slashed by a member of the Kingsguard. The Hound runs away, afraid of the wildfire that has spread all over the river, and offers to take Sansa with him to the north. It is unclear whether or not she accepts. Cersei contemplates mercy-killing her youngest child, Tommen, before Tywin Lannister shows up with his troops and horses and saves the day. Stannis is captured and his men flee, and King’s Landing remains secure. But there is one more episode left, and the game of thrones is nothing if not treacherous…

I just had to include this gif.