Game of Thrones Recap, S2E2: Greyjoy? More like shut up Theon, no one takes you seriously. 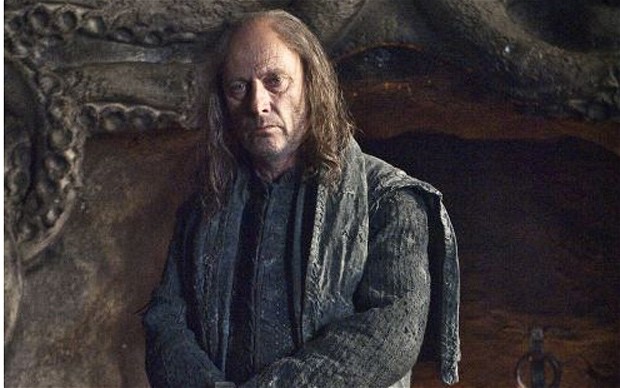 Balon Greyjoy is not impressed with your fancy outfit.

The second episode of Game of Thrones picks up right where the season premiere left off, following Arya as she tries to make her way discreetly back to Winterfell. Soldiers from King’s Landing come looking for Gendry, but they are stopped and threatened by Yoren. Still, Arya doesn’t look too confident that they won’t get sold out before they make it to safety. Gendry later reveals he knows that Arya is a girl, they have a little banter about her position as a highborn lady, and yes, of course I already ship it.

In King’s Landing, Tyrion walks in on Lord Varys having a talk with Shae, and is immediately on the defensive. It’s a good thing too, because Varys lays down some thinly veiled threats about Shae being in the city against Tywin’s orders. But Tyrion knows how things work in the city, and he tosses back a threat of his own, reminding Varys that he’s no Ned Stark. It’s awesome to see these two spar, as they’re arguably two of the smartest and most deceptive characters on the show. Meanwhile, Cersei and Tyrion continue to rule, trying to get as much information on Jaime as they can. Later, the two have another vicious back and forth, spurred by Tyrion sending the commander of the city watch away and replacing him with Bronn. During their fight, Tyrion calls out Cersei for her incestuous relationship, again, and Cersei blames Tyrion for the death of their mother. The Queen Regent’s mask continues to slip this season, showing the audience a taste of why she might be such a cold and manipulative player in the game of thrones.

Back with the Night’s Watch, poor, sweet, (and sexless) Sam Tarly shows just how lonely and adorable he is when he asks his fellow watchmen about their experience with the ladies. He helps Gilly, one of the wildling women, to shoo off Ghost, then takes her to Jon Snow, saying she’s pregnant and that they need to take her with them when they leave. Jon surprises everyone by actually listening to authority and telling Sam it would be impossible to take Gilly with them, seeing as how her father-husband would likely cut their dongs off. She lets it slip that something bad will happen if her baby is a boy, but refuses to elaborate further.

Meanwhile, in the Red Waste, Ser Jorah notices a horse returning, and finds it carrying Rakharo’s severed head and ponytail in a bag. Dany has her required moment of dragon-mother badassery, when she swears revenge and comforts a Dothraki woman who bemoans Rakharo’s lack of a proper burial.

Things really get interesting when we follow Theon “Wannabe” Greyjoy on his way to try and convince his father, Balon Greyjoy, to join forces with the Starks. Ever the charmer, after some aggressive, awkward thrusting with a woman on a ship, Theon essentially calls her less than a whore, reminding her that he hasn’t paid her for the pleasure and she should just appreciate it. When he arrives, he makes a fool of himself when he accidentally gropes and hits on his own sister Yara, then gets his poser ass handed to him by Papa Greyjoy, who is obviously not impressed by his clothes and his deal from the Starks. Instead of allying, he chooses to go to war for kingship of the Iron Islands again, and doesn’t seem to be too concerned with whatever it is the Lannisters are doing. Whoa, Theon made a poor decision and made a fool of himself in the process? Who would have seen that one coming? Not this moi! (You guys, it was totally this moi.)

And at Dragonstone, Ser Davos is enlisting help for Stannis’ cause, including a pirate named Salladhor, who’s doin’ it all for the nookie (and also the money). Stannis also brings the episode’s fuck count up when Melisandre gets to dirty-talkin’ about how he needs to give himself completely to the Lord of Light (which may or may not just be a nickname for Melly’s vajay), and that she could bear him a son, and then they bone in the middle of the war room. Everyone in Westeros must be constantly DTF or something, because it’s like these guys have never even heard of foreplay.

Finally, Jon Snow follows Craster, the Incest King, out to the forest where the wildling leaves a baby to be picked up by creepy-sounding white walkers. Of course, Jon’s discovered and gets knocked out. DUN DUN DUUUUNNNNN.