On Race, Feminism, and Jodie Landon

I loved Daria growing up, which really isn’t that big of a surprise because who didn’t love Daria, right? At the time, the show was exactly what I needed to cope with middle school (and life in general). Daria was sarcastic, monotone, and aware of being too smart and self aware to deal with everyone around her: a familiar scenario I empathized with deeply. As I’ve been rewatching the show recently, reminded of how perfectly it captured how I felt as a kid and still feel to this day, I noticed that this time it’s not Daria and Jane who command my attention. Instead, I found myself focusing on a girl just as intelligent and snarky as Daria, but even more fringe and alternative than either could possibly fathom: Jodie Landon. 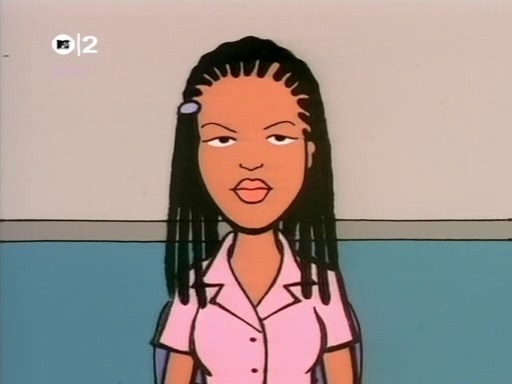 Look at her. Gaze upon the one person who is even more aware of the irony and hypocrisy of the world than Daria Morgendorffer. This is the one person who has even more right and insight to call everyone out on their shit. Meet Jodie Landon – popular girl, home coming queen, model student, and young woman of color.

I used to bask in the Daria comparisons. To be called “Daria” was considered an acknowledgment of your mental acumen, acerbic wit, and general allure as a disgruntled misanthrope. Now that I’m grown, I can’t help but think that however “Daria” I may be, the person I truly relate to is Jodie. In a sea of white faces, who couldn’t even begin to comprehend the term “privilege,” yet alone unpack it, she was the lone POC girl.

Daria is a feminist show with a feminist main character, with that teen angst telegraphed through sarcastic quips. Jodie isn’t really that different from Daria, except she’s black, more tolerant of her less-than-stellar classmates, and further out in the sidelines. Although it’s Jodie’s standing as one of the “cool kids” that makes her a secondary character, her marginalization is an accurate reminder of the real life standing WOC often have in feminist spaces.

It’s hard for me to know where to begin talking about some of the issues I have in regards to feminism and the limited spaces it offers POC. As of late, I’m more and more disappointed in my supposed allies, when attempts to talk about my individual experience as a feminist of color go nowhere. This isn’t a new complaint, either. One of the repeat offenses of post-modern feminism is the mammoth failure to factor race and privilege into the ongoing dialog. When you’re a person of color, there is no such thing as separating race and gender – it’s a package deal, baby. It shouldn’t be that great of a stretch to acknowledge that race is an enormous factor in how a woman lives and perceives her experience; it’s her race that sets the tone of how others will approach and treat her as a woman. If you get the urge to tell me that I’m wrong, you probably aren’t a person of color and you should just sit back down and pay attention. 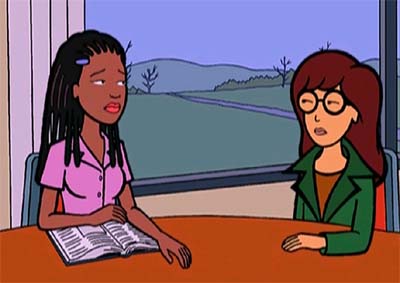 I look forward to the few seconds or minutes when Jodie gets screen time. Besides comfortably going toe to toe with Daria, Jodie is point blank about Lawndale’s almost blinding whiteness, and so freaking meta about her status as a token black character that it hurts. Daria may snark endlessly about buying into the patriarchal system and everyone’s general need to get a clue, but Jodie’s cynicism runs on a deeper level because she knows that she can (and most likely will) be collateral damage of the same system Daria may only marginally suffer. Daria can walk away relatively unscathed, or if she chooses to be continually vocal about her complaints, there is always some sort of sympathetic space for her as a white woman. The same doesn’t hold for Jodie.

But the beauty of Jodie is that she copes and works hard on her escape plan. Witness her greatness, as she nips Daria’s whining in the bud (S2E8, Gifted):

Daria: Look Jodie, I’m too smart and too sensitive to live in a world like ours, at a time like this, with a sister like mine. Maybe I do miss out on stuff, but this attitude is what works for me now.

Jodie: Then you’ll understand what works for me now. At home, I’m Jodie – I can say and do whatever feels right. But at school I’m The Queen of the Negros, the perfect African-American teen, the role-model for all the other African-American teens at Lawndale. Oops! Where’d they go? Believe me, I’d like to be more like you.

Daria, in one of her rare moments of sympathy, gets it, because she’s not a bad person and she is smart. I am not trying to single out all the white feminists out there, but I am calling out all you Darias: can you understand where Jodie is coming from? 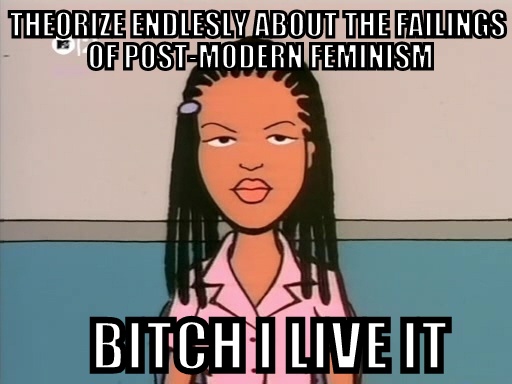 This entry was posted in television and tagged daria, feminism, jodie landon, woc. Bookmark the permalink.

16 Responses to On Race, Feminism, and Jodie Landon