This post is written by our newest guest contributor, Gray. She is a queer social justice advocate living in the SF Bay Area, who muses on pop culture and disturbs the peace on her Tumblr.

When tragedy strikes, I pray for the families of those affected; I also pray for a national conversation, but sadly one of those prayers never gets answered. The kind of national attention that comes from the incidents such as the Trayvon Martin shooting never seems to give way to a substantial dialogue. The numerous cases of violence against minorities in America are consistently written off as “isolated incidents” instead of being addressed as what they truly are – reflections of national sentiment. Since these cases are seen as individual instances and not societal problems, the question of “Why does this keep happening?” is never asked. Instead of engaging in some sort of deep, soul-searching quest into the hearts of Americans, so that we can heal the wounds of the past, I suggest we all take a look at our media consumption habits.

Recently, many were appalled by the comments flung at Amandla Stenberg – the young actress who played Rue in The Hunger Games movie – as well as shocking comments about the movie in general: 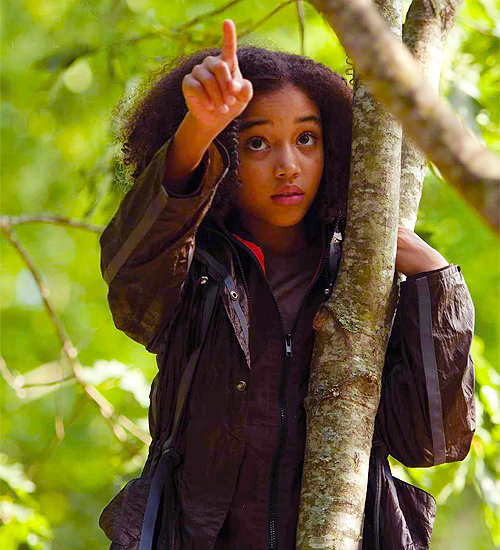 Most of you probably saw these; maybe some of you sent Amandla a nice letter, telling her how you admire her strength and encouraging her to keep at it. After the initial shock, many people truly reached out and helped in an effort to counteract many of the bad feelings that surface when America is reminded that race is still an issue for many in this country. This cues us to collectively wonder, who are all these young racists? Without answers, we wrote them off as bad people and went about our business, while down in Florida parents mourned the death of their son.

Although we have a complex and sordid history regarding race in this country, it’s about time we looked at how we can move on from this. Despite having dramatically different outcomes, Rue and Trayvon represent two sides of the same coin: whether fictional, or flesh and blood, their characters came into question based on fabricated racial constructs. Instead of taking a look at the aspects of our society that perpetuate ideas about people of color and how those ideas affect all of us, we called out people on Twitter for saying things like this:

It all made us feel better when we could differentiate the bad people on Twitter from the rest of us, because we aren’t like those people. Let’s be clear, the underlying thread here is presumed innocence. That benefit of a doubt that is given to strangers on the street has never been afforded to POC. It is a national sentiment that has nothing to do with personal biases. Perceptions of minorities in this country are shaped by the media we consume on a daily basis. The ferocious combination of movies, TV, pop icons, and billboards project images created by and for a majority white audience. The 2011 Hollywood writers report puts minority employment at 10%. As a fan of color you can be disappointed that you are misrepresented in the media, and as an actor of color you can have trouble in your career because of unfair casting decisions. However, as a POC whose image largely embodies that of a criminal or street hoodlum, as is frequently depicted on TV, you can easily become a target of others’ media-fed paranoia.

When asked about negative media depictions, most people say they are above the influence, which makes about as much sense as saying, “The junk food I eat doesn’t harm me because I know it’s bad for me”. Junk is junk and shouldn’t be consumed on a regular basis. Not only is it important to keep that in mind because there is a lot of other tastier and more nutritious food out there, but the consequences are real. If you’re someone who doesn’t have to deal with issues of public perception on a regular basis, ask yourself: how could you live in society where every stranger you meet thinks you are going to hurt them? The answer is of course, you couldn’t. People won’t do business with you if they don’t trust you; they might cross the street if they see you coming at night. They can’t picture you as a good guy. It is worth noting that one group of people is telling ninety percent of the story and building a perception of reality. The other obvious drawback to having such limited visions villains and innocents is that it gets boring pretty quickly.

How many movies do we have to see with the same woman screaming and cowering in the corner, over and over again? If not for the sake of a healthier society than for the sake of the art, I’ve seen this story and I know how it ends: the guy gets the girl, and the brown guy goes to jail. I’m bored and I know you are too. One obvious solution is to get more POC in writing and directing positions, so when POC actors get positive roles, it isn’t some earth shattering revelation. For all the support we have given to Amandla Stenberg, Rue was quite clearly occupying the magical negro trope in the film.

As fans, we need to think about the media our minds consume, just as we might think about how many calories we take in when we eat. Seeing the collective fandom light their hair on fire over a sympathetic black character should help put things into perspective, as far as how people generally feel about POCs. Seeing the Trayvon Martin case unfold should help articulate the gravity of how people’s ideas about someone else translate into making poor decisions based on those false ideas. Moreover, seeing the same junk on television day in and day out should make us all want something better.

Gray is a queer social justice advocate living in the SF Bay Area, who muses on pop culture and disturbs the peace on her Tumblr.
View all posts by Gray →
This entry was posted in guest post, race. Bookmark the permalink.