Game of Thrones Recap S2E5: The Not-So-Friendly Ghost of Harrenhal

Things are really ramping up as we reach the halfway point of the season, and the big players are beginning to show their hands. 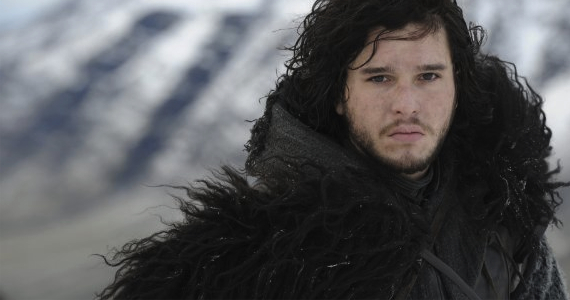 Except for Snow, who is too busy BROODING.

Right off the bat, Renly is killed by Stannis’ demon baby in front of Brienne and Catelyn, who flee for Brienne’s life. Later, Brienne offers to serve Cat, if she promises not to hold her back when the time comes to kill Stannis and avenge Renly. Cat agrees, and the two women swear vows to one another. Stannis is planning to invade King’s Landing, but Ser Davos is increasingly worried about tampering with such dark magic, and tries to warn him about Melisandre and the “Lord of Light.” Stannis agrees to leave Melisandre behind during the attack if Ser Davos will lead it. Poor dude cannot catch a break!

Back at Pyke, Theon continues to get no respect while his sister commands 30 ships. In an attempt to gain the trust and respect of his men, he decides to attack the Stony Shore, held by the Starks, presumably to draw protection away from Winterfell. When word arrives in Winterfell that their neighbors are under attack, Bran gives permission to send 200 men to help and confides to Osha that he had a dream of the ocean washing over the walls and covering everything. If the foreshadowing is to be believed, things are not looking good for House Stark.

In King’s Landing, Tyrion finds that Cersei and Joffrey have been working with a pyromancer to stockpile wildfire, which burns through anything, as a defense strategy. They plan to catapult the substance at Stannis’s ships and armies if he attacks the city. Bronn tells the pyromancer that flinging pots of fire at an enemy is a shit idea that is more likely to get King’s Landing burned to the ground, and Tyrion agrees. He takes over the secret production.

The Night’s Watch arrives at an ancient fortress called the Fist of the First Men, and prepares to launch a sneak attack on a growing group of wildlings making camp in the distance. Ever the proactive one, Jon wants in on the action and asks to go along. Adorable and amiable ol’ Sam offers to cover his steward duties, so the commander allows it.

Across the sea, in Qarth, Dany teaches one of her dragons to cook his own food, and is wooed and fawned over by the city’s elite. She is also propositioned by Xaro, who tells her that Robert Baratheon is dead and the time to take back the Iron Throne is now. He wants to marry her, which she seems naively prepared to hurry off to do, but Ser Jorah convinces her to make her own way, telling her that the allies they need are in Westeros, not Qarth. He promises to find her a ship and crew to take her back to King’s Landing. The sexual tension between the two is also starting to come to a head, so start your engines, shippers!

Finally, in Harrenhal, Arya continues to be a tiny badass, even as cup bearer to Tywin Lannister. Tywin asks her about Robb Stark and she tells him the tales of the North, about his direwolf and his supposed immortality. When Tywin asks if she believes the stories, Arya intensely stares down the old man and says that anyone can be killed. Everyone takes a collective breath of relief when Tywn breaks the tension and tells Arya to fetch more water. Later, Jaqen H’ghar offers to kill three people for Arya as repayment for the lives she saved when she helped him and those other two creeps out of the burning camp earlier. She chooses the head torturer, known as The Tickler, for her first victim, and by the end of the episode he suffers from a bad case of snapped neck.

Oh also there was this. Thank yooou, HBO.

This entry was posted in game of thrones recaps. Bookmark the permalink.