Meet “The Movement” So Far! 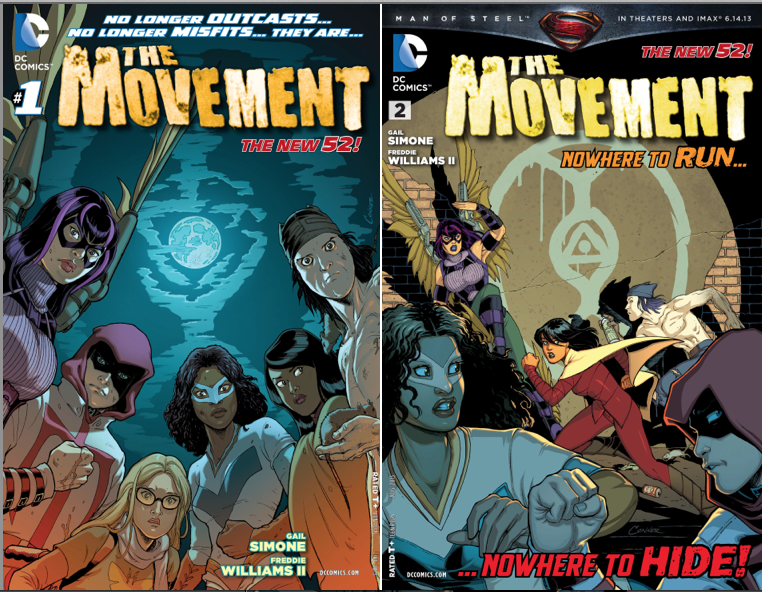 Covers for Issues 1 & 2 for “The Movement,” written by Gail Simone; art by Freddie Williams II.

Previously reviewed in Jeff’s  “We’re No. 1!” round up, DC Comics’ The Movement is Gail Simone‘s newest creation. The Movement stands on its own as a new comic series that puts a superhero spin on serious social issues. As Gail Simone put it in her interview with The Huffington Post, “It’s a book about power – who owns it, who uses it, who suffers from its abuse.”

Now that the first two issues are out, we thought it would be a great time to introduce you to the main cast of The Movement, and really celebrate it for what Gail Simone and artist Freddie Williams II are bringing to the comic book world. Be warned this post has spoilers for Issues #1 & #2!

Katharsis – A former member of the Gotham City Police Department, Katharsis (real name Kulap) first appeared in Batgirl #10 as a member of vigilante team The Disgraced. Katharsis is opinionated, headstrong,  and one of the more violence-prone members of The Movement. A fun note, Katharsis/Kulap is named and modeled after Kulap Vilaysack, co-host of the Who Charted? Podcast, and wife of Comedy Bang Bang host Scott Aukerman. 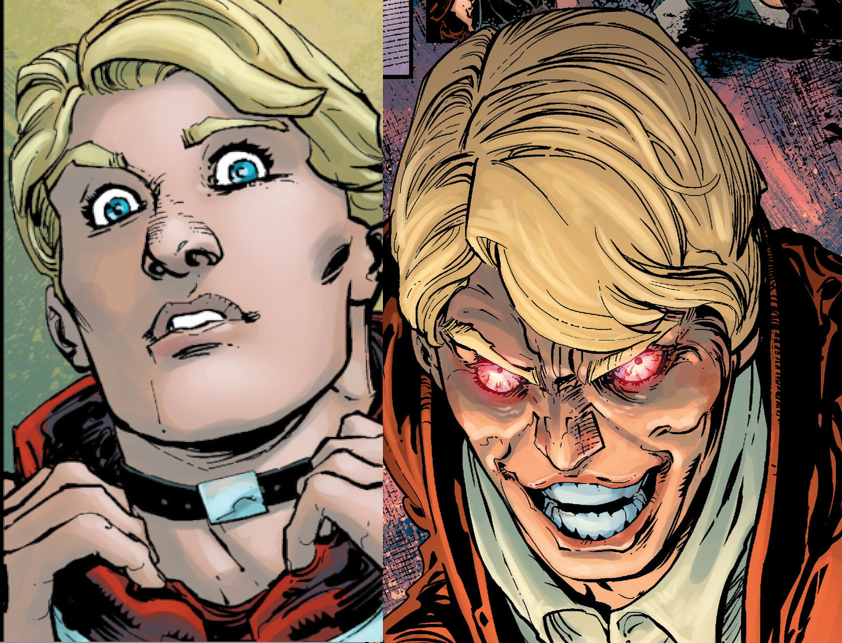 Burden –  Christopher, a tormented young man whose mental illness and superhuman abilities have had him convinced his whole life that The Devil possesses him. He is the new (albeit confused) recruit for The Movement, and his mostly-reserved demeanor hides a hell of a lot of secrets. 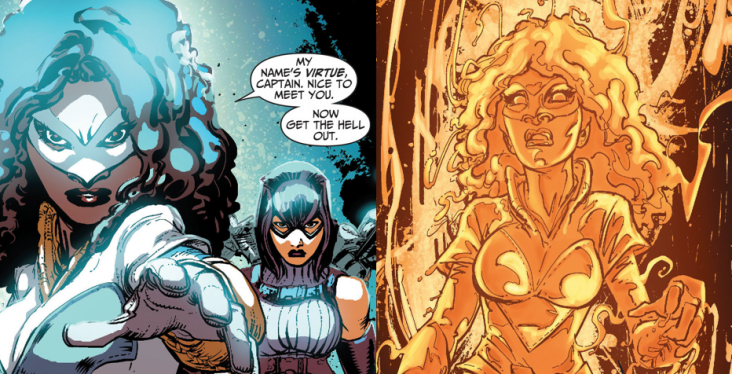 Virtue – Leader of The Movement

Virtue – Holly is a telepathic young woman with the ability to astral project—or as she puts it, “ride emotions.” Her power is beautifully demonstrated in gorgeous artwork by Freddie Williams II. She is also the leader of The Movement. In Issue #2, Virtue goes toe-to-toe with Katharsis on the morality of vigilante violence, and the power she possesses is really something to behold.

Tremor – A quiet soul whose power will make you crumble.

Tremor –  Roshanna Chatterji is a kind-hearted and quiet woman with earth-shaking abilities. Originally created by Gail Simone and Jim Calafiore for Secret Six, Tremor was redone for the New 52 as a teenager, and one of the members of The Movement. One of the more passive/non-violent members of the team, her soft demeanor is a great contrast to her seismic powers. 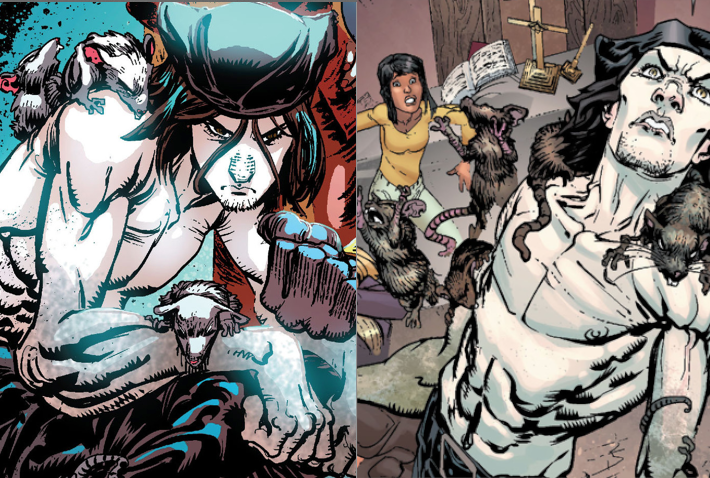 Mouse – Jayden is an eccentric man with the ability to control rats. But don’t worry, guys, he’s far from being Willard. Although we haven’t seen much of him yet, Mouse has a few adorable moments in Issue #2 that are aww-worthy. 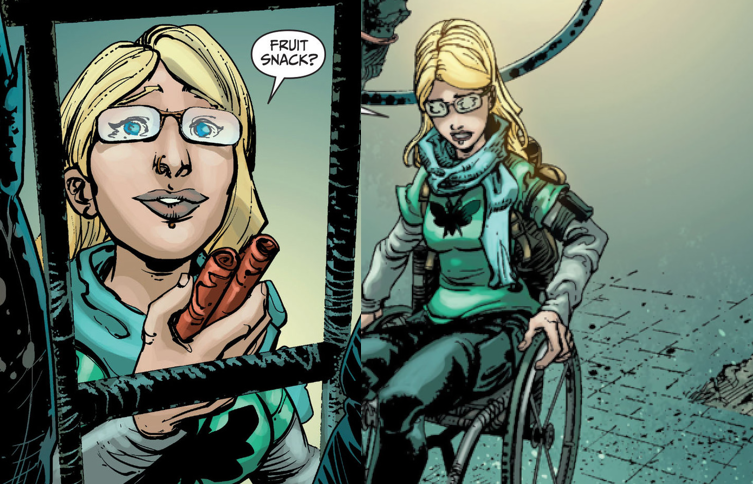 Vengeance Moth – One of the newest characters introduced. A wheelchair-bound member of The Movement, Vengeance Moth’s real name is not yet known, nor have we really seen her in action. She seems to be very kind-hearted, even offering fruit snacks to a pair of The Movement’s prisoners (corrupt police officers).

WHY THE MOVEMENT IS A MUST-READ

1. A multitude of current social problems are addressed in The Movement.

“The previous generations of superheroes were not created to address this, it’s a legitimately new frontier, both for the real world and for storytellers. It’s an adventure story, but it really isn’t about mad scientists and jewel heists, it’s more about the injustices that can affect real people’s lives, just tarted up in costumes and superpowers.”

2. The cast of The Movement is an intersectional marvel in today’s mainstream comics market.

On a team of six, there are four women and two men–a rare ratio in the “Big Two” comics world (Marvel & DC). Out of those four women, three are WOC (Virtue, Tremor & Katharsis) and one has a physical disability (Vengeance Moth). Out of the two men, one (Burden) deals with mental illness, without having it automatically delegate him to the villain slot. Issue #2 also introduced (or rather, re-introduced) the character of Sarah Rainmaker, a character who is both lesbian and Native-American (Apache).

The Movement is even more proof that the existence of a diverse team is not impossible, nor is it something that would in any way hinder storytelling or disrupt a team’s dynamic. In fact, it heightens their dynamic. Their diversity in appearance, opinion, ability and values are what makes this team great.

3. There are a bunch of awesome ladies (and they’re not all the exact same kind of awesome)!

We’ve seen in before: shows, comics, movies that claim to have a multitude of Strong Female Characters™ usually only have one type of “strong” in mind. The Movement helps with that.

Virtue is the rock of The Movement, with a strong moral compass and a compassionate side that makes her friendly with her other teammates. Katharsis is good at kicking ass, but she is so much more than just an ass-kicker or a former cop. She brings an alternate point of view to the team, one full of a desire for strict justice and swift enforcement. Vengeance Moth is sweet, nurturing and resourceful. Tremor is the pacifist of the group, strong in her resolve to do as little harm as possible while still achieving peace.

These are no cookie-cutter Strong Women™, but dynamic female characters with different points of view, all working together on one team. Nothing about them is one-note, and it’s a breath of fresh air. And with the introduction of Rainmaker as a potential villain (Cornea Killer, anyone?), we will again get to see another dynamic lady in action.

The writing is amazing, the artwork is breathtakingly beautiful and colorful, and the whole series is refreshingly fun. The first two issues have set up not only a compelling arc with the Cornea Killer and the two police officers as Movement prisoners, they have brought overarching themes of justice and corruption to the table that will be thrilling to see unfold. If you can, go out to your local comic book store, or your favorite comic app (Comixology is a great one) and get the first two issues of The Movement. You can also go to DC Comics’ website to order it directly.

WHAT TO LOOK FOR NEXT

The third issue of The Movement, entitled “Class Warfare,” comes out on July 3rd. In it, we will see how the team deals with the appearance of Rainmaker, and what it will mean for their cause.

This entry was posted in comic books, lists and tagged Gail Simone, intersectionality, The Movement. Bookmark the permalink.

1 Response to Meet “The Movement” So Far!