The Feminine Mystique: Brienne of Tarth

When it comes to George R. R. Martin’s A Song of Ice and Fire universe, there’s a hard and fast rule to play by: don’t get attached to anyone. At one point or another, your favorite is most likely going to die, or at least end up in some horrible, incorrigible mess. 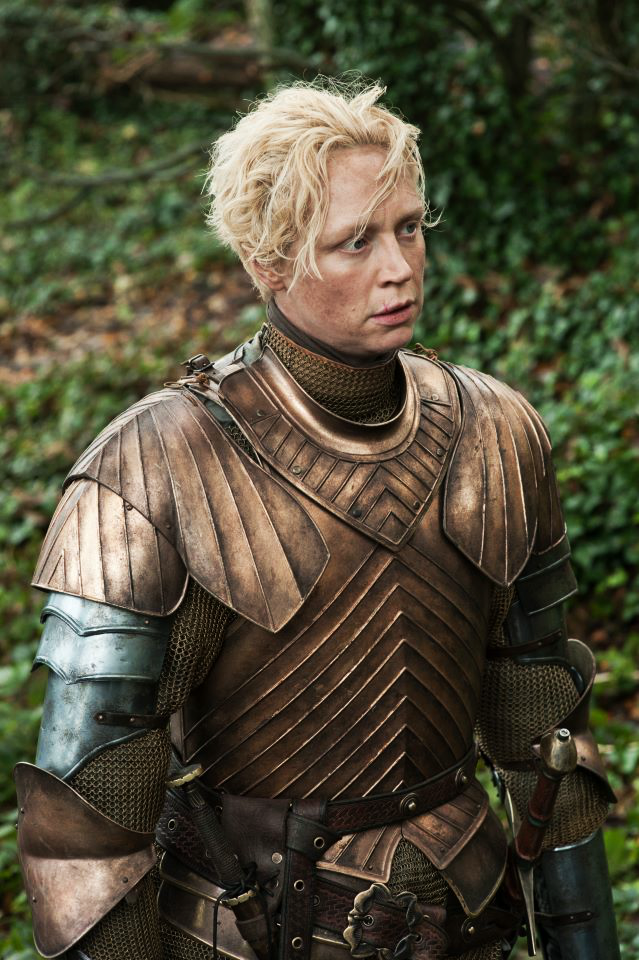 Brienne of Tarth, via Game of Thrones Wikia

But, despite this constant vigilance, I found myself attached to a maiden with lovely sapphire blue eyes – the only child of Lord Selwyn Tarth of Evenfall, Brienne of Tarth, and thus must sing her praises. Not to fear, dear readers, this post is pretty safe to read in terms of spoilers – well, as far as Season 3 of the TV series goes, since I’ve not yet caught up on the current season.

Admittedly, I danced around Brienne when introduced to her initially. I’ve been burned before by the sometimes problematic “Strong Female Character” trope, one Brienne could seem to be a walking caricature of. She isn’t prone to dramatics, and when she expresses her feelings, she errs on the more surly, taciturn side. Brienne wields a sword and fights with the best of the men on the show, even besting Renly’s knights in tourneys and beating the crap out of the Kingslayer, Jaime Lannister, Sister-Lover. But when you look – and I mean really look – at Brienne of Tarth, you see she’s anything but “a woman playing at a man.”

Despite her rough physical appearance, Brienne is thoroughly a lady. She is gentle and courteous; at times, she can even be demure and dainty. While skilled with the sword, she tends to rely on chivalry when navigating social situations. Brienne expects to be treated with respect in return, however at odds her opponent may be, much like another gentle soul trying to navigate a treacherous world, Sansa Stark. While they’re on very different paths and face different circumstances, Sansa is almost a version of Brienne, had she shared her sister Arya’s interest in swordplay and fighting. At the beginning of their stories, both the older Stark girl and the purposeful Brienne are daydreamers and a bit naive, but quickly learning that nothing is like the stories they yearned to be a part of.

There is never any doubt about Brienne’s strength, emotionally or physically. Yes, she is made the butt of cruel and dangerous “jokes”, but she’s not actually mocked for being weak or unskilled, despite being a woman. Though she is begrudged her proper acknowledgment and respect by those who hate her, it often stems from the men around her feeling threatened by Brienne and the possibility of being defeated by her. 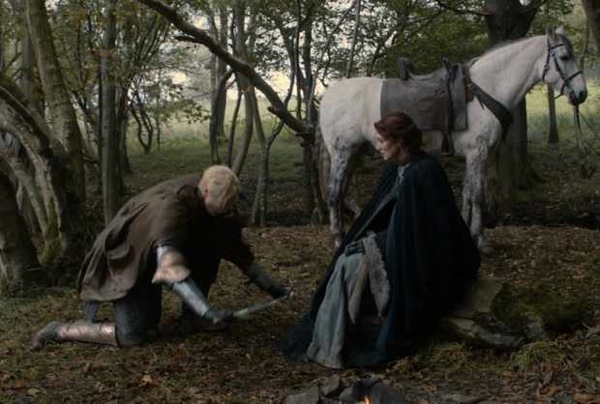 What I love most about Brienne is that we have this multifaceted female character who respects and cares for other women. My issue with the Strong Female is that character creators tend to sacrifice the milk of human kindness and quash anything remotely resembling compassion in order to present an undeniably tough woman. Often, for a Strong Female to be respected, she can even veer into the problematic territory of siding with perpetrators of misogynistic abuse. Not Brienne, though. She would never denigrate another woman or mock her for being “weak” or “feminine”. This is a crucial difference between Brienne and Cersei, for instance. Cersei wants to be strong, but she only knows how to behave so in ways she’s learned from her father and twin brother. When Tyrion and Jamie are uncharacteristically compassionate, they’re deemed more human and lovable, but this sort of luxury is called “character depth” when applied to male characters, because kindness isn’t often shown as a human trait, but just something innate only to women.

In the very rigid social hierarchy of Westeros, Brienne could easily try to make power plays and be vicious to those less strong, or beneath her station, like so many of the other characters we encounter. Instead, she is always civil and treats people with dignity. Brienne is loyal and the significance of her alliance with the true underdogs of the series (the women, just so we’re clear) shouldn’t be lost on us. Of the various players searching for Sansa Stark in all of Westeros, Brienne is one of the few – if not the only one – truly altruistic in the effort to rescue the young girl.

Lets start with who Brienne pledged to retrieve Sansa for: Catelyn Stark, who despite her many perceived faults, truly loves her children more than anything. Not only that, but before Brienne promised to retrieve Sansa, she asked Catelyn if she could be her champion. Brienne swears fealty to Catelyn because she believes in her cause. Not because Catelyn’s son Rob is the King of the North and she hopes to curry his favor, nor is she making a ploy for Winterfell or some great reward. She makes a vow to Catelyn because she witnesses Catelyn’s anguish over feeling powerless to save her child and protect the ones she loves, a feeling that Brienne may not articulate, but empathizes with. 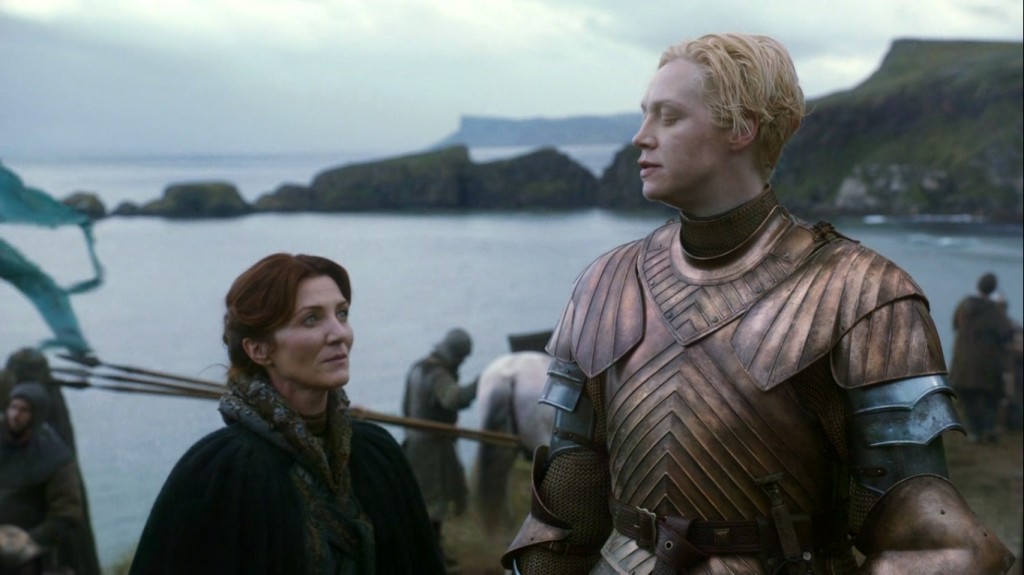 At this point, all the men who are seeking Sansa have ulterior motives; they hope to bed the pretty little bird or leverage her for some sort of profit. The young woman’s fate is tied to and going to be determined by who finds her first. Catelyn recognizes a great opportunity when she entrusts her daughters to Brienne, even though they are more strangers than friends when this alliance happens; Catelyn is fully aware that the men who seek Sansa have not made it their priority, are untrustworthy, or are working for the enemy. Brienne alone would truly save Sansa, not only because she’s a true knight, but a woman. Furthermore, a woman who has warrior skills and keeps her word.

While Catelyn doesn’t understand Brienne, she does respect and trust her, which is what Brienne wants more than anything. The warrior doesn’t want fame or riches, but to protect the ones she loves, as demonstrated by her wish to be by Renly’s side as his knight, even if her feelings for him may have gone beyond honor and duty. Brienne’s fault may be that  she bestows unwavering loyalty to those who are undeserving of it, but it is still always her choice. She cannot be bought or coerced, nor does she have it in her to falsely flatter those she does not respect.

Above all, Brienne can’t be intimidated into anything she doesn’t want to or is morally opposed to, which means a lot in ASOIF where morality doesn’t serve much purpose other than to get you killed. In the Game of Thrones, in order to live, you have to lie – a lot. Brienne, in spite of her growing friendship with a morally ambiguous (if we’re being generous) Jaime Lannister, has managed to shine bright as a model of integrity and honesty.

As the books – and I’m hoping seasons – progress, Brienne comes into her own as not a warrior, but as a woman, and one of the few who are left standing. Now that Season 3 has wrapped up and I will probably marathon the show when I get the chance, I’m anxious to make sure the writers haven’t tampered with Brienne’s character arc too much. I’ll be waiting to see if my Wench makes it. You should be rooting for her to make it as well. 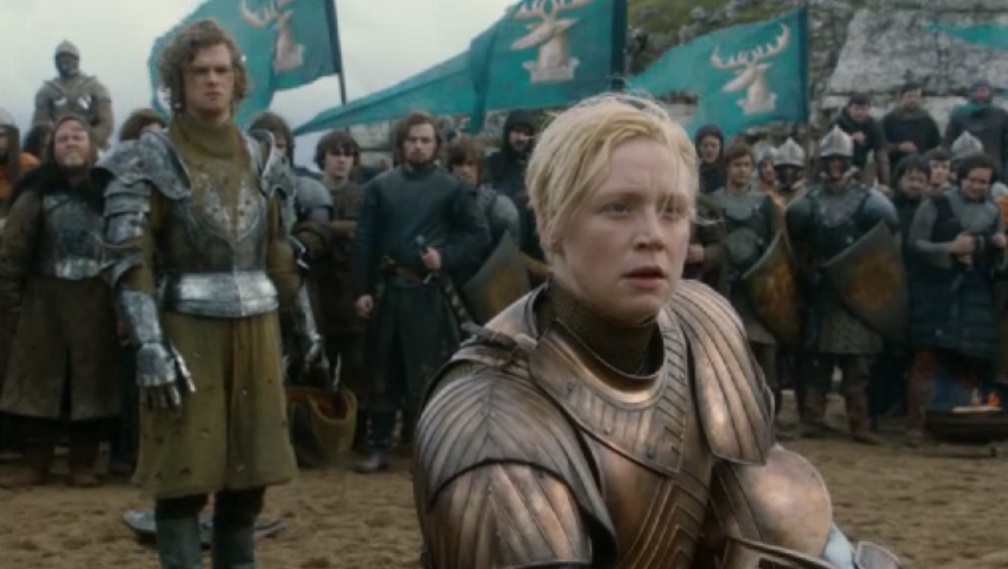 Be safe, bb. Image courtesy of Game of Thrones wikia

This entry was posted in fantasy, television and tagged a game of thrones, a song of ice and fire, Brienne, Brienne of Tarth, GoT, Strong Female Characters. Bookmark the permalink.