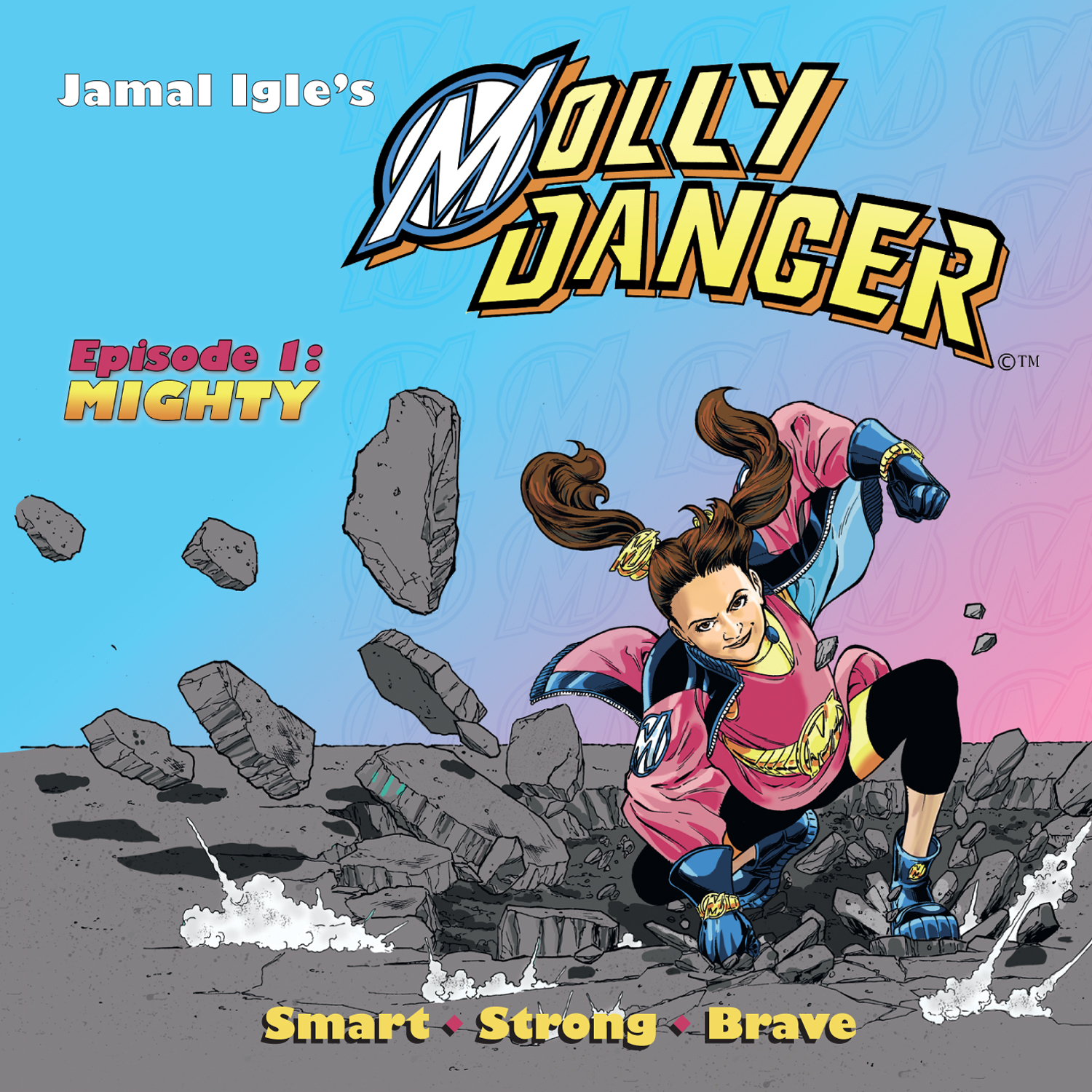 It’s understandable why comics continue to be adapted to screen – the visual stories, with their motion lines and sound effect bubbles (POW!), are the perfect medium to be translated into moving action. The folks at AudioComics, however, have been taking graphic novels in a different direction, interpreting them as full scale “audio movies” reminiscent of the classic radio dramas of the mid-2oth century. Under the direction of sound designer William Dufris, the latest audio comic is the adaptation of Jamal Igle‘s Molly Danger, the story of a pint sized super heroine who struggles with feelings of loneliness and not knowing where she belongs. (Check out Hilary’s interview with Jamal Igle from earlier this year!)

For those unfamiliar with the story, Molly Danger (voiced here by Olivia DuFord) is a very special little girl. She looks – and often acts – like a ten year old, but she’s much older and far stronger than it seems. Molly’s origins are mysterious, and she’s been told that she is the lone survivor of an alien ship that crash landed on Earth 20 years ago, an accident that has led to her never growing older, physically. Her bravery, intelligence and incredible strength have helped protect the citizens of Coopersville, NY from disaster and peril, particularly at the hands of the Supermechs, a league of mechanical hybrid villains bent on wreaking havoc. Under the watchful protection of DART – Danger Action Response Team – Molly is well cared for but not allowed to forge friendships with anyone, especially not any of the kids who idolize her. Things begin to change for Molly, however, when she meets rookie pilot Austin Briggs, recently recruited by DART.

The hour long first episode of the audio comic starts off with a flurry of activity and chaos, as Molly Danger and the DART team respond to an attack by Medula, a walking and talking brain in a jar, basically. For those unfamiliar with original graphic novel by Igle, the first few minutes may be a little confusing, but once the action settles, the rest of the episode is very engaging and easy to follow. Olivia DuFord as Molly Danger manages to capture a perfect blend of childlike sweetness and sad world weariness that are to be expected from a 30-something living as an eternal pre-teen.

Molly Danger is a comic that’s definitely for all ages – the art is sharp and bright, while the dialogue and story are family friendly, but also very cheeky, and not in a cloying sort of way. The audio drama, adapted by Lance Roger Axt and Elaine Lee, maintains Igle’s narrative pacing and also keeps a lot of the dialogue from the comic. There is a big cast of characters, from DART team members to the various Supermechs. A highlight is William Dufris as Austin Briggs, the pilot who befriends Molly. Briggs maybe a grown man with a wife and step-son, but he’s also a bit of a kid at heart, which sometimes manifests as breaking protocol during his missions. Dufris as Briggs gives him a little bit of reckless playfulness, but also a lot of heart.

The audio drama works well in tandem with Igle’s print comic. Although there were times where I felt that background music or some sound effects overwhelmed the dialogue a bit, this is a fun production to check out, particularly for those who already enjoy listening to podcasts and audiobooks.

This entry was posted in comic books. Bookmark the permalink.