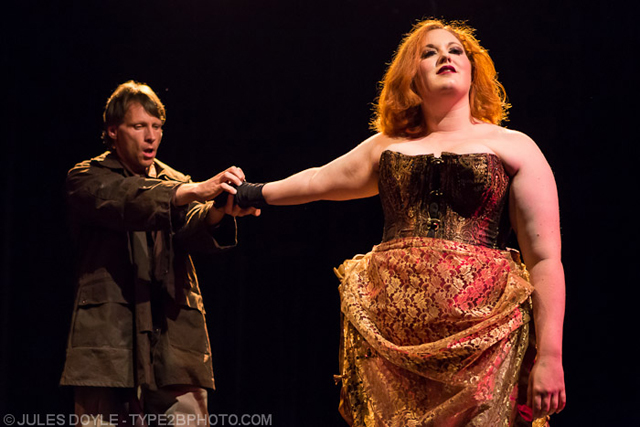 The other day as I was breaking my rule about not reading comments on the internet, I ended up following a pretty heated back and forth about the differences between introverts and extroverts, inspired by a little cartoon in which an introvert likened their need for space to being inside a human-sized invisible hamster ball. Shortly after, I found myself going through my mental Rolodex assigning some of my friends to either faction. It’s a fairly natural human urge to embrace categories, parsing the complexities of our lives by sorting experiences and people we encounter into subgroups. When it comes to people, polarities feed much of our pop culture, as heroes take on villains, shy suburban young women unleash their inner vixens, and surly accountants let Manic Pixie Dream Girls teach them how to frolic in the rain. But eventually, the push and pull can get a bit boring, and while I don’t know about most people, I tend to take notice when something in our culture makes an effort to resist the trappings of an Either/Or state of being. 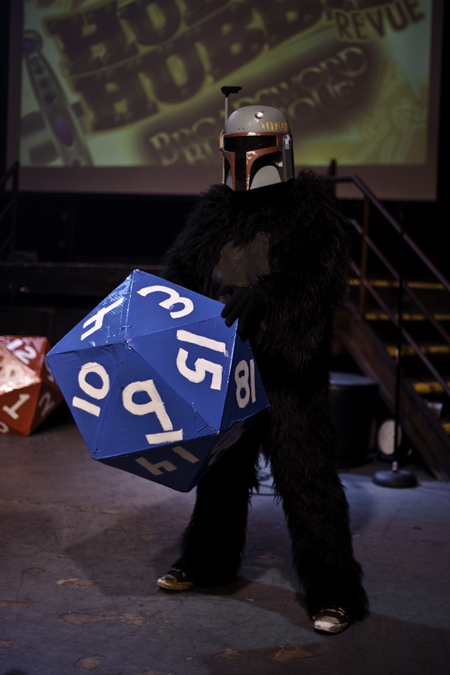 Take the whole Beauty vs. Brains dichotomy. Nerds and geeks have not traditionally been viewed as capable of sex appeal, or at least have mostly been portrayed as needing a serious makeover intervention in order to be considered attractive (Love Potion No. 9, She’s All That, every other episode of The Jenny Jones Show back in the day, to name a few). On the other side, those who embrace their sexuality and attractiveness encounter situations where they have to make extra effort to be seen as, well, human beings. A glaring example would be some recent sexist interview questions lobbed at attractive young actresses, or the fact that so many people were surprised to find out that Danica McKellar, Winnie Cooper from The Wonder Years, is also a published mathematician with a theorem named after her.

In the nightlife scene, neo-burlesque performers have been giving this staid dichotomy a swift, glittery-heeled kick in the rear by embracing nerdy characters and archetypes as inspiration for their acts. From sexy Vulcans to ageless time travelers in sock garters, this combination of two niche elements of our pop culture subverts all expectations by imbuing geeks with sexuality and proving that burlesque can be a very clever thing indeed.* 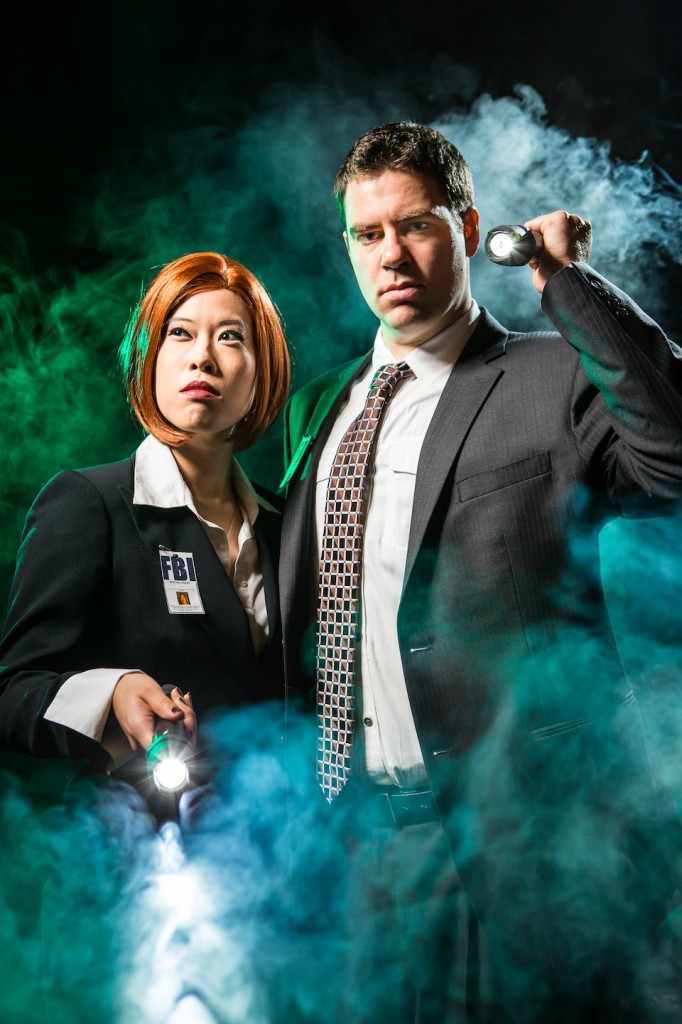 Promotional photo for Burl X-Files: The Truth is Down There. Photo: Jules Doyle

Seattle-based show organizer Jo Jo Stiletto has become a bit of an expert on this trend within the burlesque and cabaret culture — a professor of nerdlesque, if you may. In her hometown, Stiletto has been organizing geeky showcases for a number of years, including Whedonesque, an event celebrating the characters from Joss Whedon’s universe (Buffy the Vampire Slayer, Firefly, etc.), and the upcoming Burl X-Files: The Truth is Down There, taking place in late August. We first met at last year’s Geek Girl Con in Seattle, a convention focused on embracing feminism and diversity within nerd culture. Since then, she has interviewed nearly 50 performers and traveled all over to watch their acts as research for a book she is writing on the topic. “My brain doesn’t stop and won’t let me put down the notion that nerdlesque is the perfect intersection of feminism, performance studies, fandom and pop culture media criticism,” Stiletto wrote to me recently. “Plus, Spock with boobs is kind of hot and forces some thoughts on gender and sexuality.” 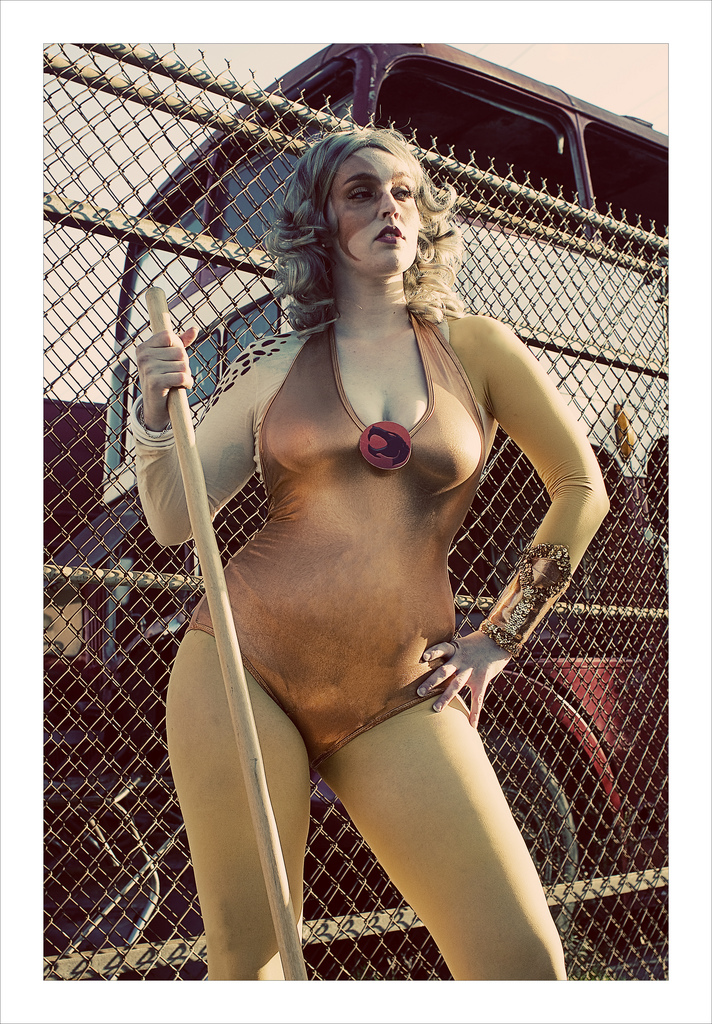 San Francisco’s own burlesque scene has been thriving for a while, with one of the longer running events being Hubba Hubba Revue. The acts have run the gamut, from classic tease to raunchy, horror inspired humor. Last year, for instance, the revue hosted Broadsword Burlesque, a celebration of swords, sorcery and all things Dungeons & Dragons. SF is also home to Tight and Nerdy, the only burlesque troupe paying sexy tribute to none other than…Weird Al Yankovic. In LA, Dizzy von Damn (Miss Viva Las Vegas ’08) has taken to the stage as V.I.C.I. from Small Wonder and ThunderCats’ Cheetara, and even performed a brilliantly twisted act entitled “Dobby does Dallas.” (That would be Dobby the house elf from the Harry Potter universe). Von Damn loves performing as these characters because they’re just plain fun, but she says, “You have to really know what you’re doing or it’s just a costume.” Fan culture in particular can be very critical towards inaccuracies and inconsistencies. “Detail is not to be overlooked!” says von Damn. “Even if 99% of your audience doesn’t see it — or its absence — 1% will and love you all the more for taking care of it, creating a full and vivid experience just for them.”

This obsessive attention to detail isn’t something that’s specific only to neo-burlesque performers. Researching a character, carefully selecting music, choreographing the routine, and planning the outfit down to every accessory is what makes a performer rise in popularity and really stand out. It’s also quite similar to the level of thorough preparation that goes into cosplaying a comic book or video game character at a convention. Burlesque performers just take it to the next level, by telling a story through their performance and fulfilling a secret fantasy someone, somewhere might have. 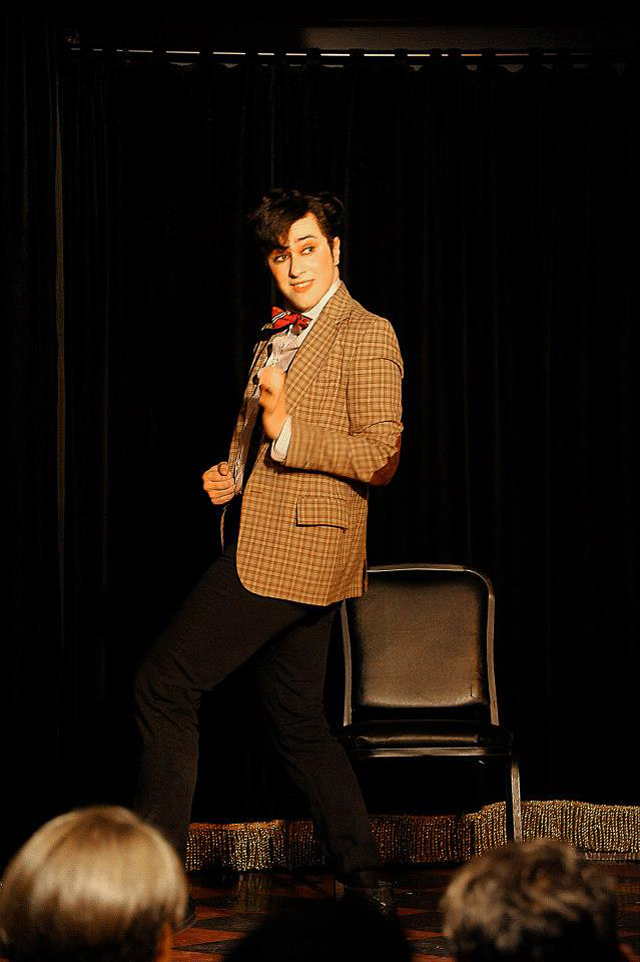 In New York, dandy Lewd Alfred Douglas takes to the stage dressed as the 11th Doctor of the cult BBC series Doctor Who. Equal parts bumbling and sexy — in other words, perfectly Doctor-like — he strips down from his iconic tweed blazer and suspenders, suggestively twirling his Sonic Screwdriver. Douglas finds the NYC burlesque scene to be particularly LGBTQ inclusive and body positive, and there are quite a few troupes and production companies that cater to the geek, like Epic Win and D20. He also notes that there has been a shift towards more audience appreciation for “boylesque,” and that appreciation doesn’t just come from straight women or queer audiences. “Instead of feeling threatened or uncomfortable, or even homophobic,” Douglas says of straight men in the audience, “they are seeing a great interpretation of a character they love and thinking, ‘Way to go, bro! That was hot!’ I get a lot of reactions like this from my Doctor Who and Lumpy Space Princess acts, from both queer and straight men, and it warms my heart.”

Although a lot of nightclub goers have been embracing the geek flavor and diversity in burlesque, there is still a lot of misconception about the performing art. Having attended a few shows at large conventions, Jo Jo Stiletto has noticed that many still cater to a predominantly heterosexual male audience, and has even heard of one event organizer specifically requesting that no male performers be part of the show. It’s a reminder that the roots of burlesque as a comedic act, meant to poke fun of society and its archetypes, seem to have been lost on a lot of people. Thank goodness for performers like Scarlett O’Hairdye, who has a whole act inspired by actor/geek Wil Wheaton of Star Trek: The Next Generation and Stand By Me fame, perfectly walking the line between sexy and weird. It’s tough work, dismantling rigid perceptions about sexuality and human capabilities, but burlesque geeks are doing it well and making it fun and accessible, one sequin and 20-sided die at a time.

*Addendum: A very astute comment was made to me recently about one turn of phrase – “proving that burlesque can be a very clever thing indeed” – as somehow alluding that neo-burlesque/nerdlesque is accomplishing something that years of burlesque performances before have failed. It’s a fair point, and although that wasn’t the implication I had in mind, I thought I’d add this here to clarify. Cleverness and creativity isn’t just the domain of neo burlesque; some of the most inventive, thoughtful performances I’ve seen have been classic tease relying on great music choices and choreography, with very few props. The response to this article has been really wonderful within the burlesque community, but I still wanted to offer up this clarification and apology if I slighted anyone.

1 Response to Nerdlesque: The Geeks Shall Inherit Sexy Dancing