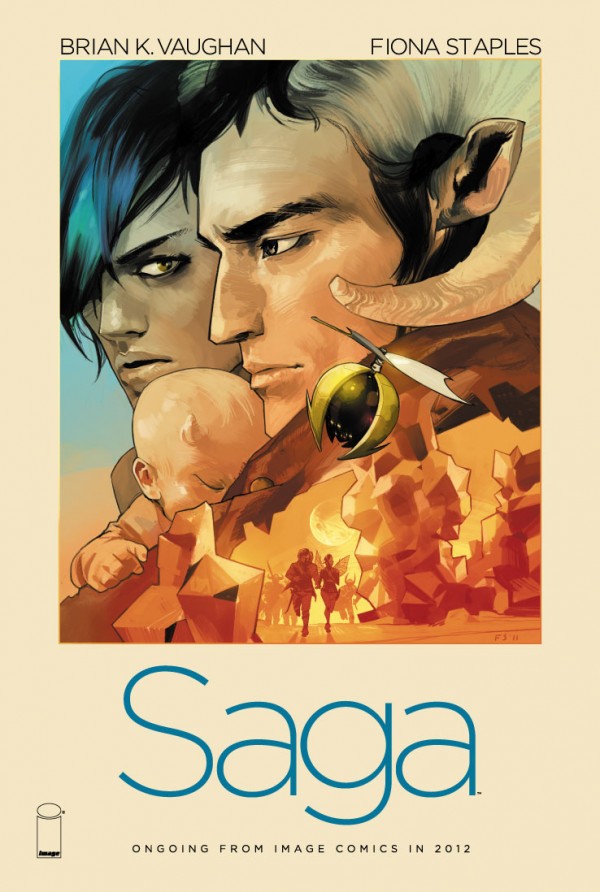 Saga (Brian K. Vaughan and Fiona Staples), a brand spankin’ new series from Image, is a beautiful adventure that takes place on faraway planets. Hazel, the narrator of the story, is first seen as a baby being born within the first few panels. We find out about her parents, Alana and Marko, a pair of starcrossed lovers from opposing nations embroiled in a battle in a galaxy “far, far away”.  Immediately following her birth, Hazel’s parents are forced to go on the run, as armies from both their nations come searching for them. Along the way, the young parents find out that they’re being chased by more than just armies.

The story so far is packed with diverse, interesting character. The main protagonists are a biracial couple with a child and there are a few supporting POC characters (however non-human, they’re still not white). The indigenous people of the galaxy are a snarky bunch who constantly call out the fighters on the pillaging of their land.  Plus, there’s a Monarchy that has televisions where their heads should be. Many have, pretty accurately, described Saga  as “Game of Thrones meets Star Wars”.

There is one thing that I’ve found problematic about Saga and it’s the casual use of ableist language. The r-word gets thrown around a little bit, which might actually be more attributable to Vaughan as a writer than Alana as a character. While Alana is a strong warrior, and a complex character dealing with wartime motherhood above all else, her usage of this word feels very forced and anachronistic given the fantastical setting. It’d be great if Vaughan could find a different adjective to illustrate Alana’s frustration.

Saga really has it all – fantasy settings, sci-fi, romance, adventure. The series is only just on its 3rd issue, and all three have sold out in stores. However, never fear, you can buy the digital editions through Comixology. Can’t wait to see where the story will head!