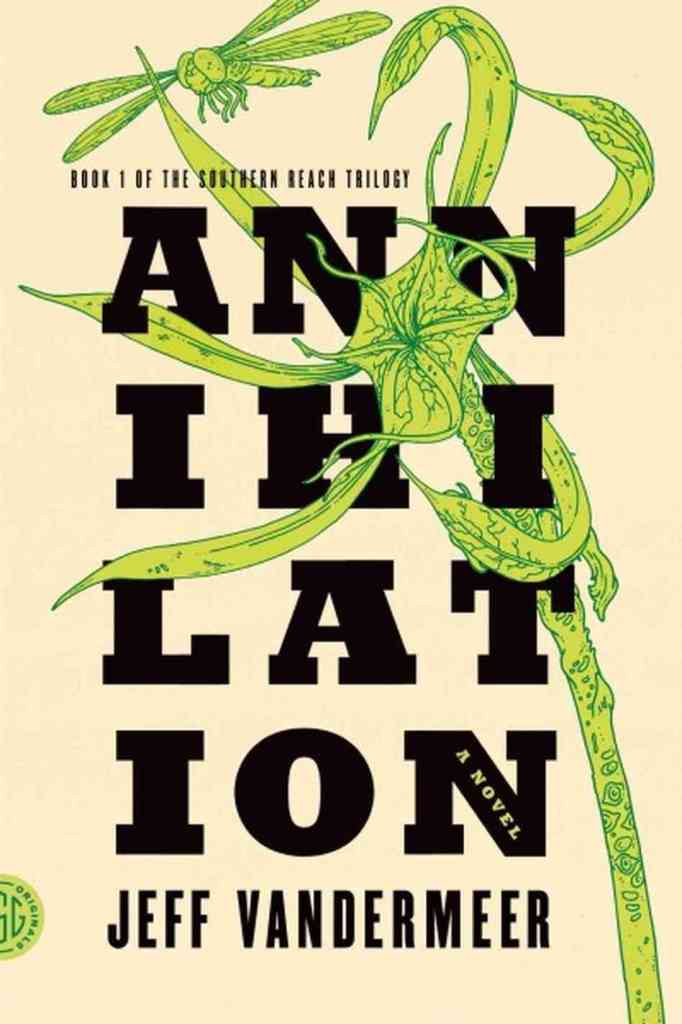 Thirty years ago, an ecological event closed off an area of land referred to as “the forgotten coast”. Saying that it was an environmental catastrophe, the government named the bordered off area “Area X.” But the government didn’t set up those borders; in fact, something else created the invisible barrier that for a long time was impenetrable. When passage into Area X opened inexplicably, a government agency called Southern Reach sent expeditions of scientists to investigate, all of them failing in their task. Some would come back with no recollection of what they saw, others wouldn’t come back at all, and many came back only to die of cancer months later. This is how Annihilation, the first book of Jeff VanderMeer‘s riveting Southern Reach Trilogy, begins: with the twelfth expedition setting out on their mission.

The latest expedition is made up of four unnamed scientists, all of them women. They are the Psychologist, the Surveyor, the Linguist, and the Biologist, whose point of view makes up the majority of the book. What happened to the prior eleven expeditions? What is in Area X? Who is in it? There are lots of questions, but don’t expect clear cut answers. Whatever answers you get are surrounded in ambiguity, like the fuzzy humidity in Area X, and before the main questions are answered, many new ones sprout, like mushrooms.

The books tap into the fear of not knowing if what you’re seeing and thinking is real, and whether you can trust your own senses, or anyone, at all. The trilogy is a creepy, crawling story that burrows into your head. Described aptly as “weird fiction” rather than science fiction, there is a definitive atmospheric feel. In a recent Reddit AMA, VanderMeer said the inspiration for the first part of Annihilation came to him from the landscape of northern Florida and a fever dream he’d had. The description of Area X is like walking through the woods and hearing a twig snap behind you, or hearing a flock of birds singing and then all falling silent at the same time. Like in a dream, VanderMeer captures the anxiety of not knowing what’s around the bend yet still walking ahead. Through its cast of characters, the trilogy also gives the reader a glimpse into how scientists, bureaucratic government agencies, former preachers, and civilians would all try to interpret and make sense of Area X.

The second book, Authority, takes place at the Southern Reach headquarters and pumps the breaks when it comes to pace and suspense, except for a few very intense passages. In an environment dependent on paperwork and facts, how can people handle a place that defies logic? VanderMeer was inspired by his own, at times humorous and frustrating, experience in an office environment. Even when characters are actually dealing with something as serious and unfathomable as Area X, office politics reign. The final volume, Acceptance, brings all the characters together for the thirteenth expedition. Going back to Area X after the stifling environment of the Southern Reach office was a breath of fresh air.

All three books in the Southern Reach trilogy were released earlier this year, three months apart, as individual volumes, and then published again in an omnibus in late November. Each book is a quick, engaging read that can be absorbed in just a few sittings. The story arc is suspenseful and at times horrifying, yet frequently humorous. What’s more, the vibrancy and diversity of VanderMeer’s characters really shines and every character simply is, focused on solving the mystery of Area X and introduced without fanfare: the women scientists of Annihilation, as well as different people of color and queer characters introduced without fanfare.

Paramount studios acquired the film rights last year and Annihilation is already in development, with Alex Garland (28 Days Later, Ex Machina) writing the screenplay and Scott Rudin and Eli Bush set to produce. Also, VanderMeer is publishing a novella about Area X in 2015. Get ready, the world is about to get a lot weirder.

Karly is a geek who works at a bookstore in the Midwest, where she obsesses over sci-fi/fantasy books and TV with her coworkers, and spends the other time thinking about LGBT rights and representation in media. You can follow her on Twitter, where she live-tweets all the TV she’s watching and some other important things.
View all posts by Karly →
This entry was posted in books and tagged Jeff VanderMeer, science fiction, Southern Reach Trilogy, weird fiction. Bookmark the permalink.