There is a veritable wealth of powerful ladies rioting across the pages of DC’s #0’s this week. Plus, Dark Horse gets in on the #0 game with one of their most powerful female protagonists, the Kickstarter project Womanthology goes where no person has gone before, and just to round it out, there’s a new Star Trek Next Gen #1 to whet our appetites. 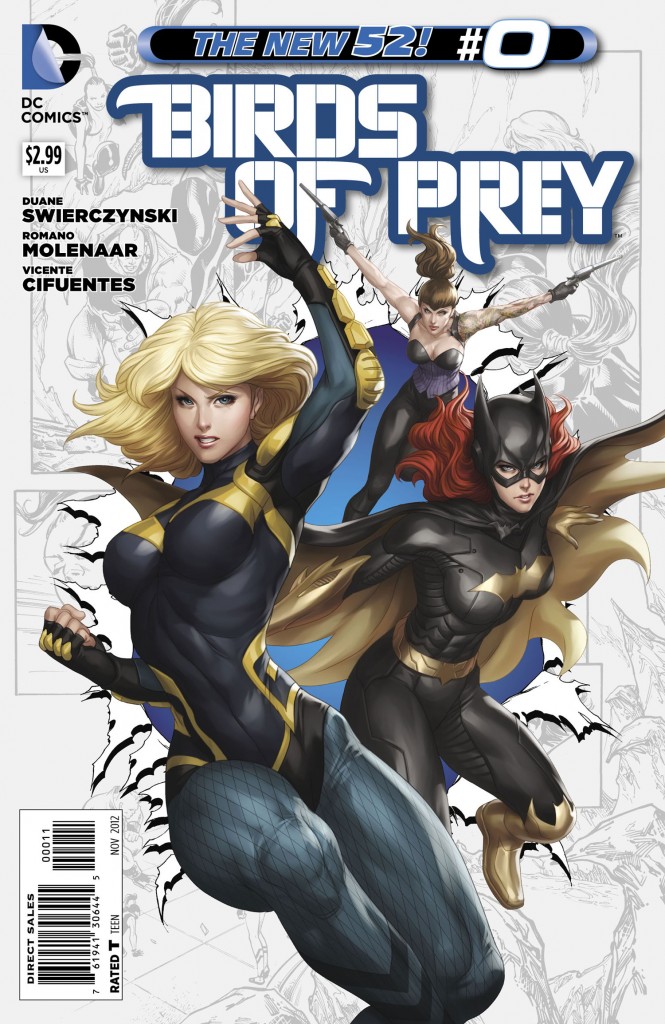 Birds of Prey #0 gives us a very basic overview of the first meeting between the two main protagonists – the meta-human Black Canary and her partner, the very human Starling – while undercover and working for The Penguin. Old Oswald clearly prefers the company of powerful women in a sadly misogynistic way, but these two super ladies and Batgirl turn the tables on him, as he so richly deserves. There’s plenty of good ol’ tough-lady butt-kicking here, slightly marred by a needless shot of Black Canary pre-shower in her underwear. (Her ACTUAL underwear, as if the spandex suits aren’t enough.) Still, in the ongoing trend of comic portrayals of women in hand to hand combat while semi-naked, both Black Canary and Batgirl stand out.

Supergirl #0 is also a pure background book, but does little to impress beyond a fan’s desire to know more about Krypton before it’s destruction, and the family dynamics of the House of El. Kara Zor-El, who we know as Supergirl (why not Superwoman?) has a backstory that perhaps all little girls can understand. She’s a girl whose father (Superman’s uncle) loves his little girl more than anything, and is willing to risk his marriage, his life, and even his world’s safety to protect her. Ultimately, this is more a story about Zor-El himself than Kara, which makes for pleasant but light reading. 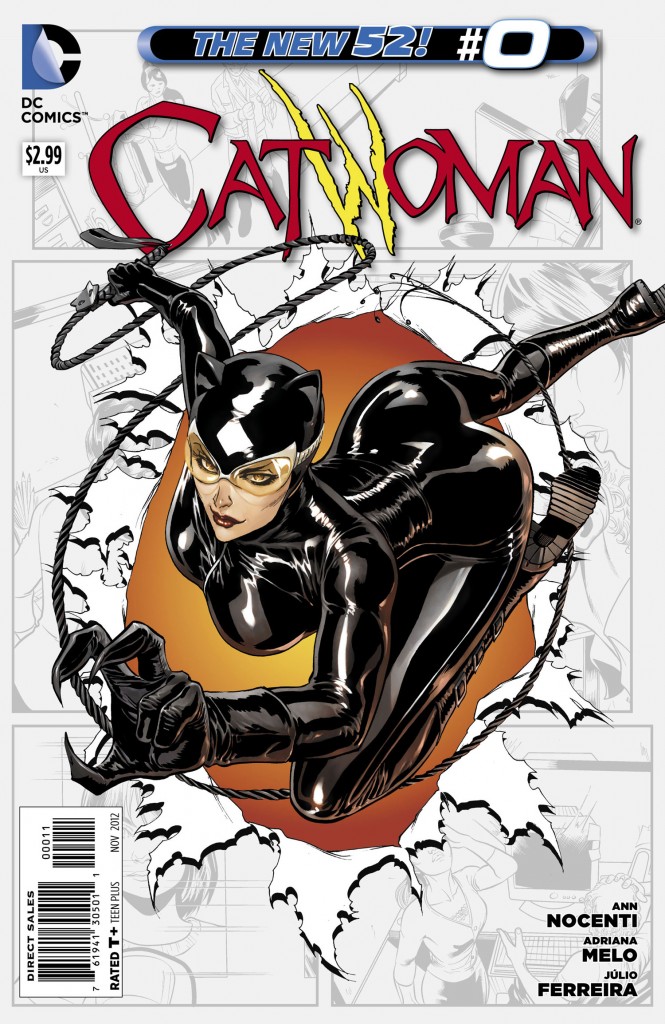 Catwoman #0 is an all-over-the-place re-imagining of Selina Kyle’s wounded past and would, perhaps, generate more sympathy if it weren’t quite so slapdash, from a storytelling perspective. Selina Kyle began as we all do, a fundamentally good person. Sadly, she met with just too much tragedy at too early an age. Selina is an orphan who has suffered at the hands of others her entire life, as we see through various ham-handed flashbacks throughout the book. We see more than ever that Gotham’s leading lady of crime has a deep sincerity to her, a drive to do good in a city so full of bad. Now that we know more of her childhood, it’s no wonder that she has such a hard time making that desire for altruism a reality. This maturation from a character long viewed as slightly morally skewed into a more fully realized, driven, and conflicted woman and anti-hero has been one of the more compelling reads in DC’s The New 52 so far, and her issue #0 could have been 4-5 issues long, for what it’s worth.

Meanwhile, DC’s chance to get their girl power street cred right falls sadly flat with the biggest female tent-pole character in all of comicdom, Wonder Woman. The #0 issue of the superhero world’s original feminist icon is a thoroughly dull tale that plays like an illustrated Greek myth written in the 1960’s. It turns out that a man, Ares the God of War, and not the powerful Amazonian women who raised her, put Wonder Woman on the path to her own heroism. It’s sad to see THE representation of powerful women in comics be so predictably manipulated by male characters and drives. This was very disappointing, just as the entire Wonder Woman series has been since it’s reboot. 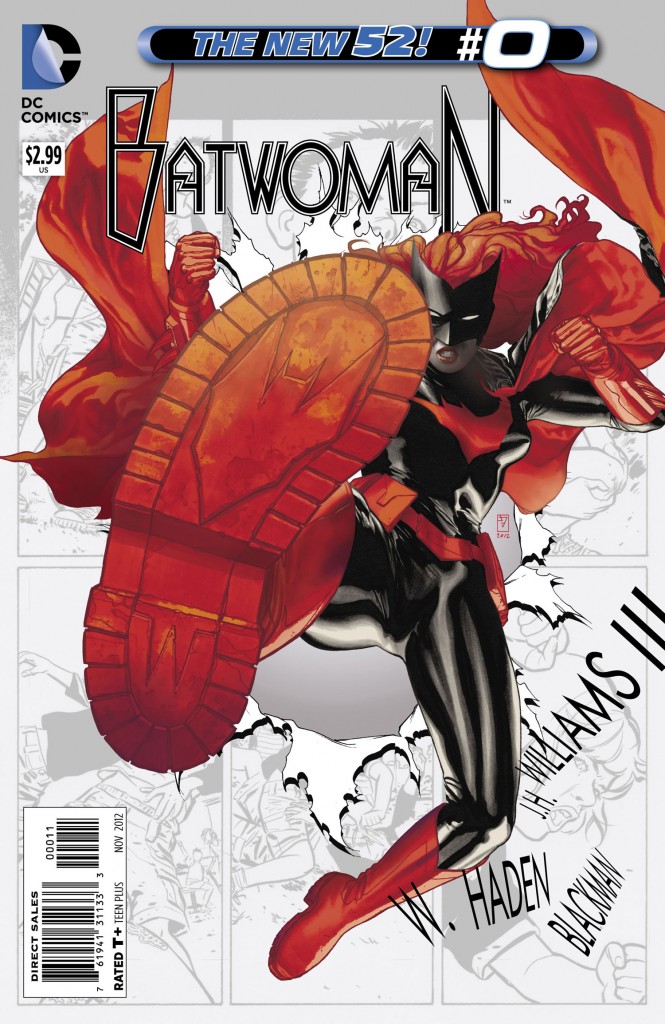 Lastly we get the issue #0 of simply one of the best books from the Big Two in the market today, Batwoman #0. As has been noted here before, this book is fantastic, not just from the point of view of addressing social issues but just based on pure storytelling and artwork. It’s just gorgeous, and the #0 is no exception. It’s a letter from Kate Kane to her father, the man responsible for so much of her becoming the hero she is, and still not at all the reason she is Batwoman. Unlike Supergirl or Wonder Woman this week, Batwoman’s story is one of a woman who is indebted to her father for helping make her the strong woman she is, and not protected or manipulated by him into something that serves his purposes. She fights evil in Gotham for her own reasons, is proud of herself as a woman and a lesbian, and makes no apologies for being Kate Kane or Batwoman to anyone, not even The Batman himself. The story of her training is as brutal and arresting as that of Damian Wayne’s, from the Batman and Robin #0 issue last week, but both more darkly realized and more uplifting than the new Robin’s deeply disturbing past. A great book with a great issue #0, don’t miss out on it! 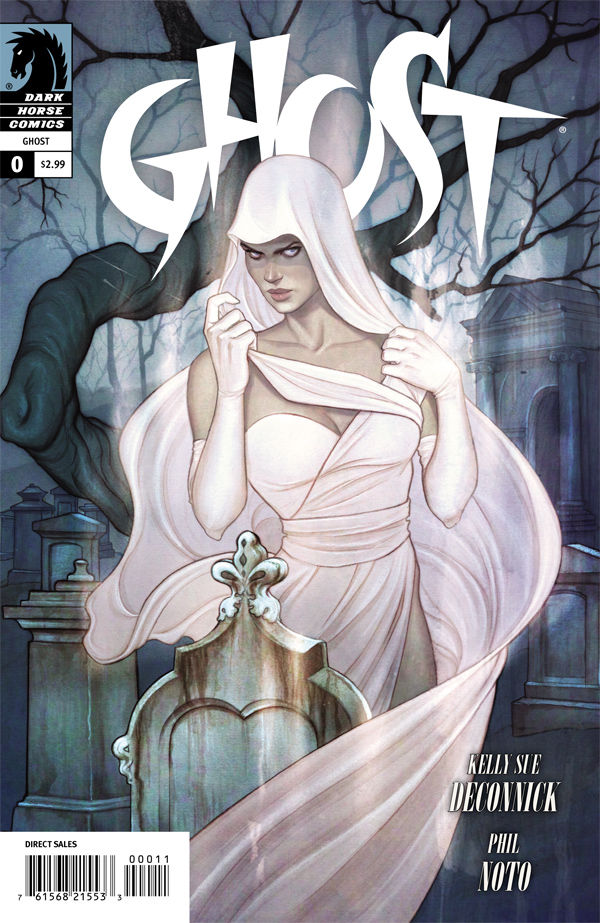 Dark Horse comics looks to reboot a popular series from the 1990’s with Ghost #0.  The main character, as yet unnamed in the new series, is an otherworldly spirit conjured from a mysterious object by disgraced journalist Vaugn Byrnes and his partner, the somewhat douchey yet irrepressible Tommy Byers, host of the fly by night cable show Phantom Finders. These two manage to somehow conjure the ghost known in Chicago as Resurrection Mary, who appears as the famous apparition in white from the earlier comic. The similarities seem to end there, but it’s tough to tell, as there isn’t much of Mary’s story here and more narration by Vaugn about his life and how awful it is. Mary uses her otherworldly abilities to get her two resurrectors out of a spot of trouble, but kills an underworld low life in the process, and the three set out to discover who the thug was, and by extension, who Mary was and why she seems to suddenly have reappeared on the earthly plane. Written by Kelly Sue Deconnick (Captain Marvel) one can expect pretty fair treatment of the lady who dons the flowing white on the cover of this book, but I wish there were more of HER in this opening chapter. Still, DeConnick’s work on Captain Marvel lets us know she respects strong women and Ghost has promise in that area, for certain.

The groundbreaking Kickstarter project Womanthology returns with an all-new mini-series, Womanthology: Space #1. This project is a wonderful outlet for women in comics, completely written, drawn, and funded online by women. IDW is really doing something right here, and the new series features a selection of shorts about women in space, from sassy intergalactic diner waitresses and haunted space stations, to competing female astronauts vying to be the first human beings to go back to the Moon! Perhaps the best of the bunch was the short detailing the adventures of Princess Plutonia, who completely turns the gender tables in an old school Flash Gordon style action adventure by rescuing a MAN in chains! Take that, Princess Leia’s Gold Bikini!

And then, just for the fun of being back in outer space, IDW brings us a new Star Trek: The Next Generation series with ST:TNG Hive #1. Jean Luc Picard seems never to be far from the call of the Borg collective and Locutus, the Borg he once was. In a new tale of future, past and cross-dimensional threats, Picard is both the Captain and Locutus once again, engaging the Borg as well as a new deadly enemy, the Voldranaii. (This may be, if I’m not mistake, a Ghostbusters reference. Wasn’t there a “Third Rectification of the Voldranaii” in the Key Master’s conversation with Egon? Could be somebody else…) Regardless, it’s a fun reintroduction to a universe that began a staggering 25 years ago this week, and if you’ll pardon the pun, an engaging read.

So that’s the cream of the crop from this weeks #1’s and #0’s, come back next Wednesday for the final round of DC’s Zero month and many more new stories in comics!