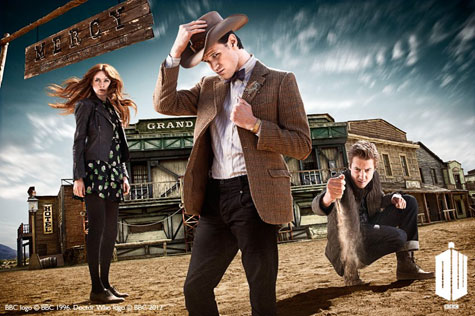 Hey folks, sorry this is a day late. (Food poisoning is quite the thing). Moving right along let’s talk about this week’s Doctor Who episode, “A Town Called Mercy”. Are you ready for some spoilers?

In “A Town Called Mercy”, The Doctor and his Ponds end up in the Old American West. The TARDIS takes them to a town called (you guessed it) Mercy. Out in the desert, all by its lonesome, and surrounded by a mysterious circle that keeps the town in and outsiders out. Turns out they’re harboring a fugitive alien, and protecting him from a cyborg that wants to kill him. In the end, we learn a lesson about facing your past, forgiveness, and using your strengths for good.

Let’s start with the POC count: one. One lone Black man, playing the town preacher.(Because of course he is.) One is better than none, I suppose? (Sigh.)

The pretty obvious allegory in the episode surrounds the fugitive alien, Kahler Jex, who was basically the Josef Mengele of the Kahler race, using “lesser” citizens to perform horrific experiments for the sake of “science” and war. The Gunslinger is one of those experiments, gone awry and out for revenge. Unlike Mengele, Jex is seeking redemption and in Mercy he creates for himself a sort of Purgatory, helping the townspeople by bringing them electricity (10 years too early) and advanced medicine.

As the story unfolds, we again see the Doctor go a bit out of control, as he’s absolutely ready and willing to send Jex away to his death at the hands of the Gunslinger. Amy gives The Doctor a what-for in one of the best scenes of the episode, asking the question that has definitely been on my mind after last week’s episode, “Since when do we go around killing people?”

It’s interesting to realize that we’re no longer traveling with the 900 year old Doctor, but more like 1,100 year old. He has changed in ways that only 200 years could cause and I’m starting to see the pattern here, building up to the questions surrounding what we know as the theme of this series: “Doctor WHO?”

All in all, “A Town Called Mercy” wasn’t a particularly offensive episode, in my mind. In fact, it was definitely the best one so far. Amy & Rory were somewhat more background in this episode, but I’m looking forward to next week, when we really get to see more into their lives. (Their silly hipster lives…)

So what did you think? Did anything in “Mercy” make your blood boil? Tell me about it!

This entry was posted in Doctor Who, recaps, television and tagged A Town Called Mercy, doctor who. Bookmark the permalink.