We’re No. 1! Noir, Outer Space, and Too Many Bikinis

This week in first issues in comics we’ve got pulp-noir heroes, outer space shenanigans, interstellar reality TV, base exploitation of the female form, and the self-identified “ugliest kid on Earth.”  So, let’s get to it. 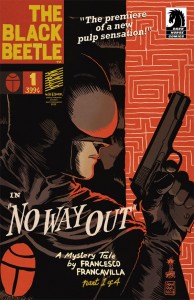 The best of the bunch this week is a pure noir superhero tale from Dark Horse Comics. The Black Beetle #1 is a classic thriller in the vein of the Shadow or the Green Hornet, or even early pulpy Batman, and the hero here, The Black Beetle, seems more along the lines of the latter. He’s a detective who’s taken to wearing a black leather costume reminiscent of a big bug, packing his trusty .45’s and some fancy gadgets, and takin’ on organized crime in Colt City. This is honestly pretty fun, without a lot of depth. There is no sultry lady trying to get him to take the case here (and we’re grateful for the dodged stereotype) and in fact, there are no ladies in this tale at all. It’s a pretty homogeneous cast, and a mysterious one at that. This book doesn’t make the mistake that a lot of super hero stories do, avoiding bogging us down with the origins of the Black Beetle. We just assume he’s a good guy who’s determined to do the right thing. While this might ordinarily make for a flat story line, the over the top pulp-y illustrations by Francesco Francavilla lend themselves to a radio era simplicity that makes the reader not care all the much about the past. We’re ready to get into the rip roaring present, and The Black Beetle is such a gorgeous book, it’s quite easy to do. It holds promise, for certain. 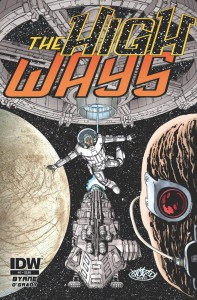 Legendary X-Men writer John Byrne gives us a dose of outer space adventures in IDW Comics’ The High Ways #1,a new comic prominently featuring characters of color. In a future where mankind is slowly exploring and populating the solar system, shipping lanes from one planet to the next are fraught with real life dangers of space travel as we understand it. Young Eddie Wallace, fresh from simulated navigation training, is hired by the space transport ship the Carol Anne. Learning first hand about the rigorous, and even dangerous, work of long haul transportation, he ends up on a surprise run to the moons of Jupiter. Seasoned space veteran Marilyn Jones joins him and the grumpy Captain Cagney on a run that has surprising results, as they arrive on the moon of Europa after a perilous 8 months, only to find they weren’t expected. This is an entertaining space comic along the lines of the original Alien film, with the every day industry of space providing the tension in the storyline as much as the mystery. In a world where it’s best to wear your space suit at all times in case of hull breaches, what kind of brave soul or utter fool would make his living in the blackness of space? Eddie is a bit of a stock character – a young rookie learning the ropes – but it’s nice to see that in the future and off the planet, race isn’t part of his day-to-day issues. He and Marilyn get along well, and her banter (not to mention her tie-dyed flight suit) makes her out a tough but entertaining woman, making her way in the void, and I look forward to their further adventures. 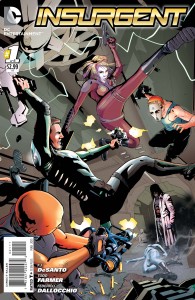 The science fiction doesn’t stop there, as DC brings us their first book, in quite a long time, set outside their fabled universe, which they so successfully rebooted a little over a year ago. Insurgent #1 is the first crack at a stand-alone universe since then, and it’s a dark new world indeed. Set 15 years in the future, Insurgent is the story of a group biologically enhanced super soldiers created in secret by the U.S. Government to weed out the dangers of terrorism around the world. Sadly, the process of creating super soldiers made these men into monsters who then had to be hunted down by all too human hunters like John Ravane, to be terminated with extreme prejudice. The last of these Insurgents, as they were known, was unable to be stopped in secret, and the destruction of the secret illegal program brought down the sitting President of the United States, at the hand of an assassin’s bullet. Fast-forward a decade, and it turns out the Insurgents might not all have been eliminated after all. Now, a new breed of sleeper bionic agents are awakening, realizing who and what they are, and going off the reservation. Now it’s time for Ravane to come back and hunt them again, but it’s the last thing this hero wants to do. Ultimately, Ravane is a dull and lifeless character, a burnt out hero-cop who’s called back for one last case, and an archetype we’ve seen way too many times before. Also, the use of the word Insurgent over and over again as the code name for these advanced bionic men and women is off-putting, largely as it’s not being defined correctly. The most interesting characters in the story are all women, and in the sci-fi thriller realm that’s a welcome break. Ravane’s adopted daughter, who’s actually the daughter of the last super soldier he took down, is unaware of her true parent’s nature.  The mysterious and well-named Ms. Frost is an intelligence analyst and the niece of the new President (who’s Asian, another welcome tweak to the future); she is tough as nails but lacks field experience. Lastly, there’s Eve Bauer-Greene, the first of the sleeper Insurgents to awaken. Eve has no idea how she came by her advanced abilities and skills, and is taken in by a mysterious masked figure to be part of a new revolution, when all she wants is to go home. While there have been a lot of these kinds of comics surfacing in recent weeks (like Clone and Comeback), this one has a more organized story, despite some of its flat characters, and a gritty yet brightly lit visual style from artist Frederico Dallocchio. 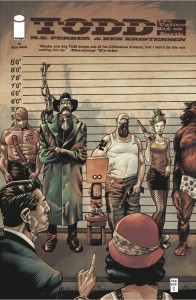 Next up was a book I’ve been looking forward to for a while from Image, Todd: The Ugliest Kid on Earth #1. Todd’s parents, total clods that they are, force him to wear a bag over his head, and the diminutive youngster is never portrayed without it. He lives in a world full of foolish people, not to mention racist cops, bullying classmates, and a serial killing piano teacher who’s collecting the heads of the town’s youngsters. Almost every character in this comic is more ironically bumbling and foolish than the one before them, invading Todd’s life and creating havoc. Sadly, Todd is no better than most of them. He’s written with a sweet naiveté that’s almost off-putting, as if he perhaps deserves the punishments and humiliations doled out to him. Todd isn’t much of a hero, and the gag about his ugliness is almost ignored, as if it was only there to provide a reason as to why the main character wears a bag on his head. He also isn’t blessed with the intelligence to overcome the chaos around him, nor does he gain inner strength from the torment he receives. Ultimately he comes off as a simpleton, and not even as interesting as his supporting cast. Perhaps there is underlying comedy here that I am missing, but it’s highly unlikely, as that’s usually my personal bread and butter. This concept had potential, and the art by M.K. Perker is certainly silly enough to be able to convey the wit, had there been any. 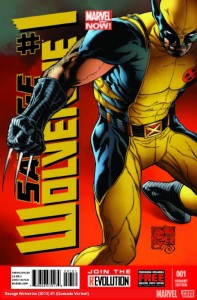 There were a few other notable #1’s to quickly mention this week as well. Marvel brings readers a new look at an old favorite with Savage Wolverine #1. Everyone’s favorite X-man is suddenly and mysteriously dropped into the Savage Land (the Marvel Universe equivalent of Jurassic Park) and must try to solve its newest mystery, alongside Shanna the She-Devil, one of Marvel’s least interesting female characters on record. Sheena is basically the female Tarzan, and has apparently not owned any clothes since the 1970’s besides her skimpy leopard print bikini. She sadly is in desperate need of Wolverine’s help to survive, even on her own turf, and is a great example of exactly what’s wrong with the way women are so often portrayed in comics.

DC introduces a new title in its Green Lantern family of books with the confusingly titled Threshold Presents: The Hunted #1. Jediah Caul is a disgraced deep cover Green Lantern (who knew there was such a thing?) caught in an interstellar alien empire’s version of reality death match TV, hunted by every sentient creature in the quadrant, having been cut loose by the Green Lantern core for … something. Inventing a new alien sci-fi subculture on the spot makes the book pretty confusing, but on top of that, the story was actually kicked off in DC’s Green Lantern: New Guardians Annual, which hit the shelves last week. Jediah Caul is an unoriginal character as well, his alien world is not well formed, and ultimately, you aren’t likely to care if he gets his head blown off on interstellar television. And if you object to never ending gratuitous violence for the sake of violence in comics, then this book definitely isn’t for you. 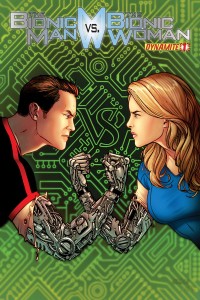 Lastly, Dynamite comics brings us yet another #1 that isn’t really, with Bionic Man vs. Bionic Woman #1, which isn’t yet what it sounds like. Both of these classic characters recently had a run of their own miniseries, and this series is intended to bridge the gap, according to the preamble. Sadly, it’s a split tale, with the first and third acts centering on Col. Steve Austin doing some serious work investigating a bionic menace that’s stealing people hearts, and the third act depicting the Bionic Woman Jamie Sommers on an undercover mission as a stripper. She complains about it and steals a jacket from her quarry to cover herself in the last panel, but it’s a little too late, not to mention that the pay off of the word versus in the title never comes to fruition.