“We’re No.1!” A weekly look at new stories in comics

While there are only a few offerings to look at, this has been a week of unbelievable artistic talent in some of the new offerings. This is clearly some of the best comic artwork to come down the pipe in a long time. It’s also quite the week for No.1’s from a feminist perspective in particular, so let’s get cracking. 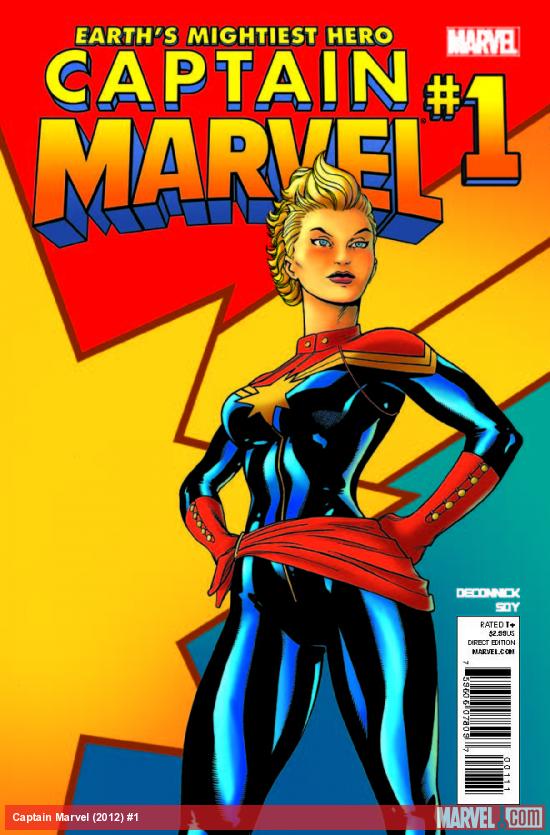 First up is an issue so striking in it’s feminist image of power, it simply cannot be ignored: Captain Marvel #1, written by Kelly Sue Deconnick with art by Dexter Soy. Carol Danvers, the much abused and often dead Ms. Marvel, has finally come into her own, assuming the mantle of Captain Marvel from the now deceased former male version of the character. As a character, Ms. Danvers has been through the ringer a few times over. Since her creation in 1968, she had been taken to another dimension and controversially impregnated ( in the analysis of critic Carol A. Strickland, raped); she had part of her consciousness and abilities absorbed by fan favorite X-Men character Rogue; she’d been replaced by an evil doppelganger during the Dark Avengers storyline; and she lost her male mentor and role model, the original Captain Marvel. This new story bravely marks a significant step in comics. Many of the big companies’ tent-pole heroes have, for years, had female versions, almost always in sadly diminutive forms, i.e. Supergirl. The step up to Spider Woman or Batwoman is not a huge feminist step forward, especially considering there is still a corresponding Bat Girl. The fact that Batwoman is an open lesbian character is a huge step in a positive direction, though whether it’s more positive for the LGBT community or for women as a whole is a question worth considering. All that said, Captain Marvel’s new title is the first time that a major super hero’s female counterpart has assumed the role of the hero herself. It’s no small matter that the title of the hero and the company are the same, for that matter. This is a bold statement from Marvel, handled well by Deconnick’s story. The character shows a depth of feeling that’s well appreciated, an ability to tolerate both severe punishment and Spider-Man’s odd sense of humor at the same time, and a reverence for her own female role model as an Air Force pilot (the deftly realized Helen Cobb). We’re shown that Captain Marvel’s strength comes from an honest sense of who she is and not just her alien/human hybrid genetics. Her reticence to assume the name Captain Marvel is an interesting conundrum she openly struggles with, despite having been urged to do so by Captain America himself. It’s nice to see the living embodiment of the American flag understanding that gender isn’t a dealbreaker when it comes to heroic leadership. That Captain Marvel is a leader in her world is without question, and as either a leader of The Avengers themselves, as she has been, or a role model for female comics readers in the future, it’s clear she takes her responsibilities seriously. Meanwhile, the art here from Dexter Soy is simply beautiful and quite serious in tone, and his design of the new Captain Marvel as a woman of femininity and strength who manages the rarity in superhero comics of staying completely covered from neck to toe is a welcome addition to a great story. Stay tuned to this story, True Believers. Marvel is doing you proud. 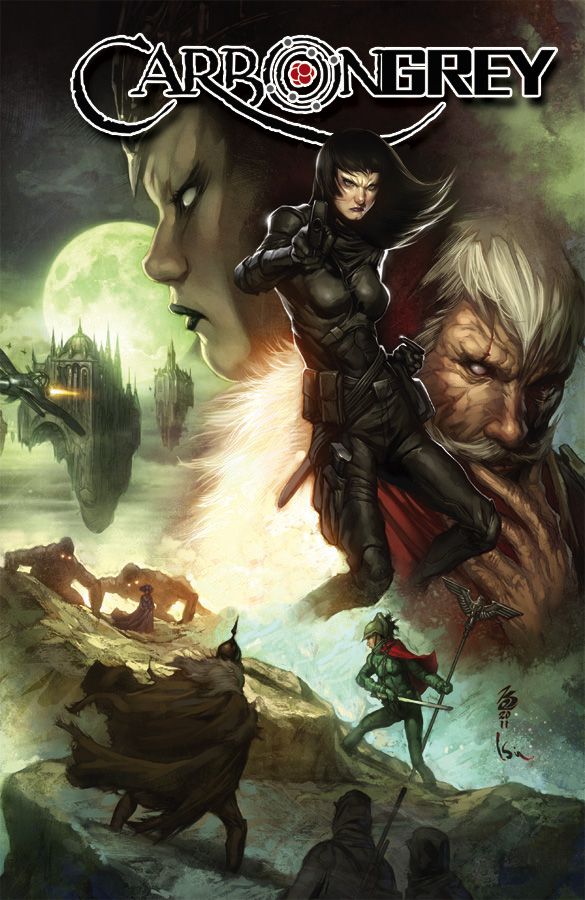 Next we have a gorgeously hand painted book that gives us a fantastic tale of a powerful family of women in a dystopian diesel-punk world. Carbon Grey: Vol. 2 No.1 from Image Comics was originally a Kickstarter funded project 8 years in the making, and is an ambitious and sweeping tale of a world slightly off-kilter from our own. Set in 1913, the Axis and Allies, in their own distinct forms, are at war. At the heart of the Axis powers are the Grey Sisters, reputed descendants of the great hero Gottfaust, born for generations in groups of three and trained to protect the regent of the Axis, The Kaiser. The current incarnation of the long-lived family of super sisters, however, bears four Greys, the last two having been born twins. Of these twins (Giselle and Mathilde), one of them – we don’t know which – is the 13th Grey sister, and therefore part of a prophecy attached to the Gottfaust religion in the Axis that will bring about revolution. Confused? It gets better. The last Kaiser is dead, having killed himself after entrusting his protector Giselle to deliver a message to the commander of the Allied Forces, and Giselle is on the run from her own armies. Her elder sisters, Eva and Anna, are on the run as well, from a character known as The Wolf General, who believes the Greys are conspiring to take the throne for themselves with the help of the Queen, the Kaiser’s widow who is pregnant with his heir. The Wolf General is working with … oh never mind. It’s a complex story to be sure, though not as incomprehensible as it sounds. It’s also a story of four young women born and bred to be warriors of the highest order. However, unlike the previously reviewed Executive Assistant series, these women are strong and capable, showing very clearly that while the men who rule their world seem content to train them to kill on their command and, in a sense, act as religious figure heads, the Greys are not content to be ordered about. Indeed, this world is theirs to shape, be it by political allegiance or pure unadulterated combat (seriously, in one scene Giselle jumps out of a jet in flight and slices another jet in half. With a sword!) and these sisters are not to be underestimated. This issue prompts both further reading, and a look at the beautifully illustrated first volume as well. The story can be a touch heavy handed, but the art is compelling, the women (both good and bad) are tough as nails, and the world is oh so fun to romp around in. 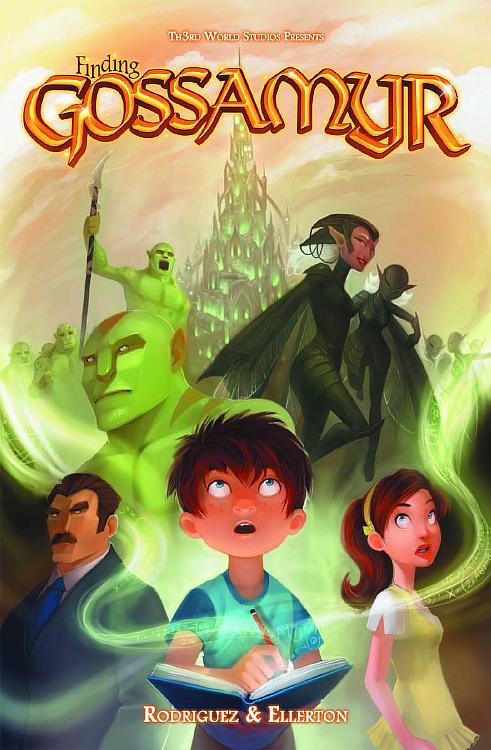 Lastly this week we have Finding Gossamyr No.1 from Th3rd World Studios, written by David A. Rodriguez and illustrated by Sarah Ellerton. It tells the story of a young boy named Denny and his older sister Jenna, who is acting as his caretaker and guardian in the absence of their parents. Denny is a mathematical genius, in fact almost a savant, who also exhibits characteristics of extreme Asperger’s or autism. Jenna is a young woman who has been forced to grow up too fast, having taken on the responsibility of a challenging little boy at the expense of her own post-college ambitions. To help both her brother and herself, she has enrolled the boy in a special school dedicated to the “advancement” of the most sophisticated mathematical theorem ever known to mankind, and while the school doesn’t expect their gifted charges to “solve” the problem, they do expect better behavior than Denny exhibits on his first interview. Unknown to his mysterious academic benefactors, Denny has in fact already solved the theorem, correctly deducing that it is an entrance to an other-worldly realm, in which mathematics are literally magic, and his gifts give him incredible power. Illustrated in a style reminiscent of work from Pixar or Disney, this book holds an all too grown up powerhouse of a story about a little boy who feels lost, a big sister who feels hopeless despite her strong willed determination to protect him, and a world sure to delight geeks. Did I mention, Math is POWER??!??! Denny is a misunderstood and difficult kid who hopefully will find some fulfillment in this new reality, but it’s his sister Jenna who is the most compelling character in the first issue here. She’s a strong protector in a role she’s not happy to have and too young to fill, and she’s not always good at it. The feeling of compassion Rodriguez is able to manifest for both of these children is remarkable, and worthy of your attention.

After a disappointing week last time around, three stellar new No. 1s to grab hold of this week and to keep reading as their tales progress. Until next week, happy reading!

This entry was posted in comic books, guest post, We're No. 1!, weekly features. Bookmark the permalink.