We’re No. 1! New Dreams and Nightmares

Nightmares and dreaming are the big themes this week in #1 issues, as are old memories. We’ve got a nightmarish version of Edgar Allen Poe, a reboot of a golden sci-fi classic, two different tales of dangerous dreams invading real life, and a little bit of the Avengers, to boot! 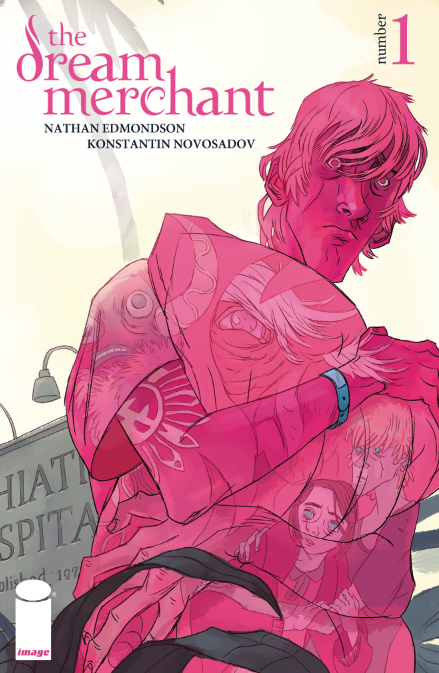 First up this week is Dream Merchant #1 from Nathan Edmondson (Olympus, Who is Jake Ellis?) and new artist Konstantin Novosadov. When Winslow was young, he had a vivid recurring dream that he was flying across a fantastical barren landscape. As he grew into a young man, he had a harder and harder time telling when he was dreaming this amazing dream and when he was awake. Now living in a mental hospital, Winslow’s life is suddenly shattered when nightmarish figures from his dreams emerge in real life and try to destroy him. Forced to go on the run, he’s joined by a young hospital worker, Anne, a rather naive young woman who describes herself as a former “juvenile delinquent.” She and Winslow have been having a bit of a jailhouse flirtation, and when he comes under attack she is all too eager to help him, just for “the adventure.” The main flaw with Anne seems to stem not from the way the character is written, but how she’s drawn. Winslow is tall, gaunt, and rarely smiling, and has a haunted appearance, as well he should. Anne is rather mousy, drawn with bobbed short hair and a fashion sense like a woman much older than her. Her look doesn’t seem to fit a wild child, free spirit she claims to be, ready to take an escaped patient on an adventure through a lucid dream. Overall, it is difficult to understand her motivations. The two are joined by The Dream Merchant, they mysterious old man who promises to explain all and teach Winslow to “hide in his dreams.” The Dream Merchant is a Jungian figure, managing to be both mysterious and frightening, and his unusual presence helps shape the books climactic ending.  This double sized issue was gripping, if a little off center, and will be one worth following. 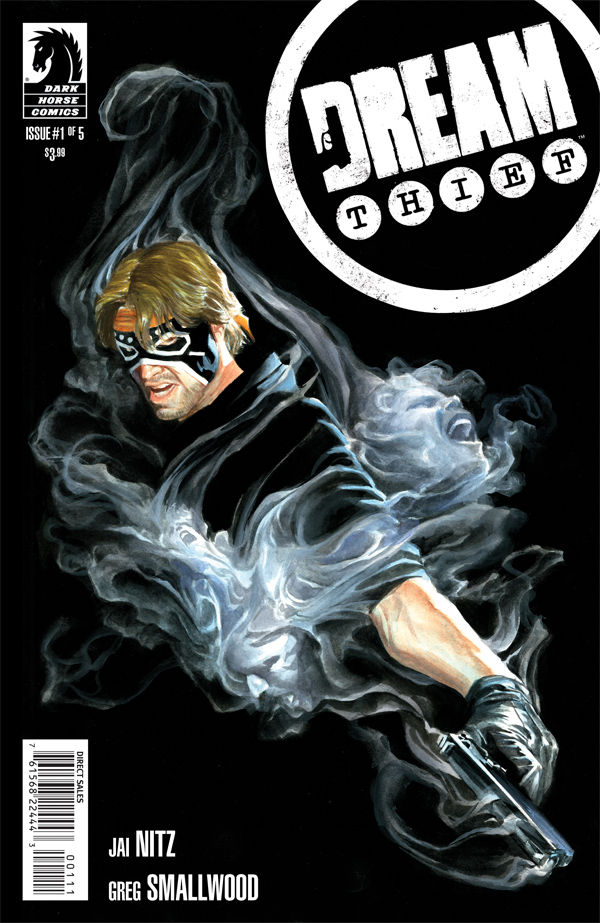 Our second tale of slumber disturbed this week is Dream Thief #1, from Jai Nitz (El Diablo, Green Hornet) with art by Greg Smallwood. It’s the story of John Lincoln, who has a bit of a problem: he keeps waking up in places without remembering how he got there. He’s also stolen an ancient Aboriginal mask from a museum opening he was attending with a friend, while he was as high as a kite. To make John’s life even more complicated, now he seems to wake up and realize that he has other people’s memories in his head, and that he’s been killing people while he’s asleep. His girlfriend, who may have murdered someone herself, and several porn actors are his latest victims, and he’s beginning to worry that he should never sleep again. The mystery of the mask here is never explained but frankly, it needed to be.  As the first of five books, this one did little to set up much of the story, beyond proving that John is a bit of a jerk, his murderous somnambulism not withstanding.  The appearance of the deus ex machina mask is abrupt, and the other coincidences of the book are haphazardly piled upon each other, making the narrative difficult to follow. The character of John is solid (if unlikable) and he’s certainly in a pickle, so it will be hard not to continue to follow this one, but it needs to sort itself out rather quickly in issue #2. 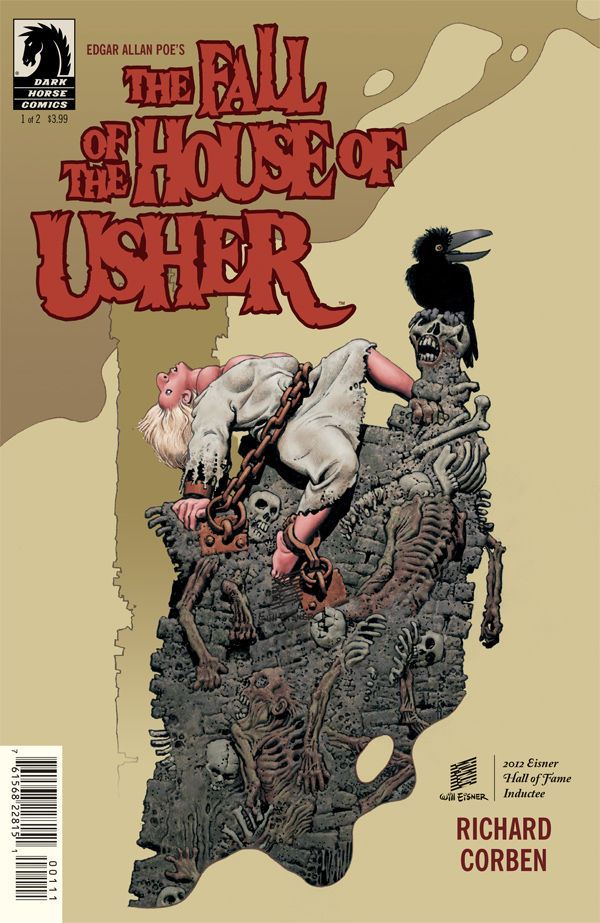 Dark Horse Comics brings us an adaptation of one of literature’s most famous nightmares with The Fall of the House of Usher #1 by Eisner Hall of Famer Richard Corben. It’s a beautifully illustrated broadening of the tale, giving the original murky narrative a brighter hue. The narrator, here named Allen, has journeyed to the house of former schoolmate Roderick Usher, who has spent his time virtually alone honing his artistic talents. He’s been painting his sister Madeline over and over again, and his sister secretly informs Allen that she fears for her life. There’s an extra layer of narrative here that I don’t recall from the original short story, and the artistic style is masterful enough to engross you, no matter your feelings on Poe, or this adaptation.  It’s a beautiful book, and frightening despite the bright colors and somewhat cartoonish tone. 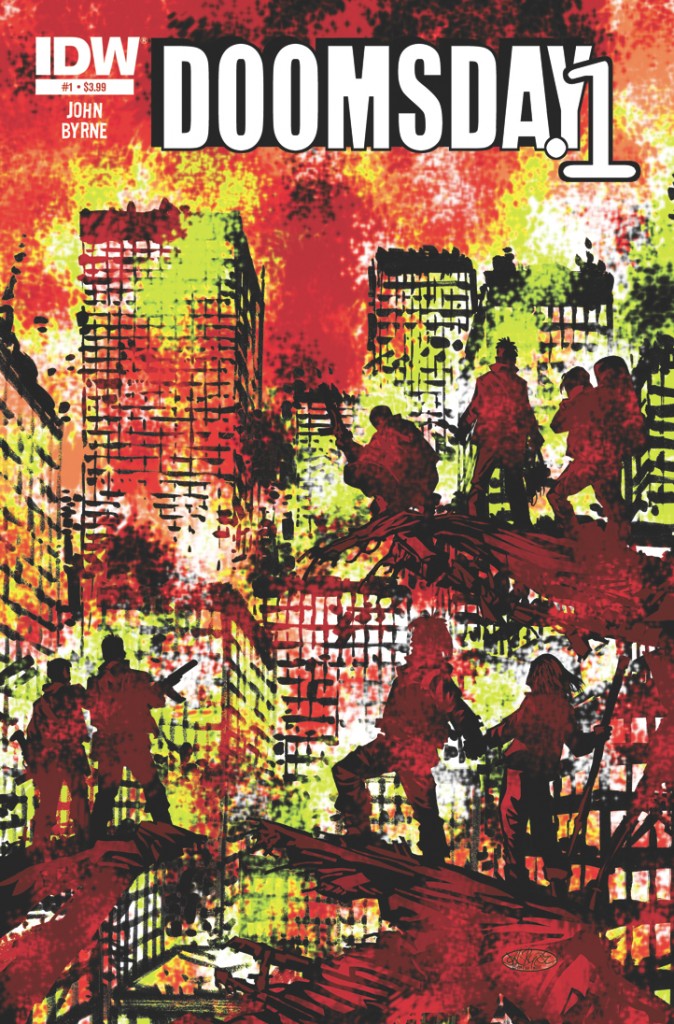 Another legendary artist and writer brings us a singular terrifying vision this week, as John Byrne (Uncanny X-men) gives us Doomsday.1 #1. Seven astronauts aboard the International Space Station are forced to do little but watch, as a gigantic solar flare bursts forth from the Sun, looking certain to extinguish all life on the planet. While the nations of the planet prepare for the unstoppable worst, these seven astronauts observe the near total destruction of their home planet, and determine to return to whatever home they have left. The frightening reality of the approaching end of all things in such a trivial and final way is haunting in this book, and creates a dull sense of fear that sticks with the reader after the final pages. The cast of astronauts is a bit too Disney, if you will, covering all the ethnic and gender bases as if constructed as a social studies project, but the characters are well conceived and their motivations are intensely human. They want to study what happened, they want to prove their theories about partial survival of their species were right, and they want to live, above all else. The art in this book has Byrne’s unique style, and while it felt a bit dated at the beginning of the story, that feeling soon fades as the gripping end of the world scenario takes hold. 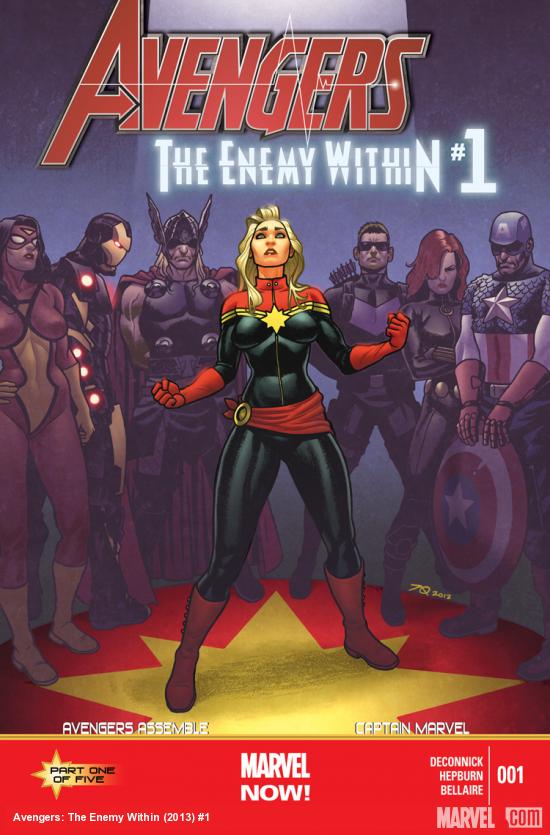 Things get a tad lighter from here, beginning with Avengers: The Enemy Within #1. This isn’t truly a new series but another Marvel mini-series bookend (like we saw with their X-termination and Carnage: Alpha and Omega series) and the full story will span issues of their Avengers Assemble and Captain Marvel titles. It’s written by Captain Marvel scribe Kelly Sue DeConnick and centers on Carol Danvers as she attempts to deal with stunning new information: she has a lesion in her brain, and her powers are making it worse. She knows full well she could die if she over uses her abilities, but Carol has never been one to shy away from adventure. Now, someone else knows about her condition and is manipulating her into a dangerous battle that could be the end of the new Captain Marvel. Both Carol Danvers and Jessica Drew, the long-time Avenger Spider Woman, are featured heavily here. Former wrestlers turned super villains The Grapplers are on hand to put the ladies through their super hero paces, and it’s a ton of light-hearted action fun. My particular favorite was the muscle bound villain Poundcakes, a character who shatters all expected ideas of women’s bodies in comics, as surely as she smashes apart Central Park.  She’s built like a female Juggernaut, and she’s proud of it. This series makes a nifty entrance point into the Captain Marvel series, and anyone reading this blog who isn’t reading that comic is surely missing out on one of the best female centered comics going today. 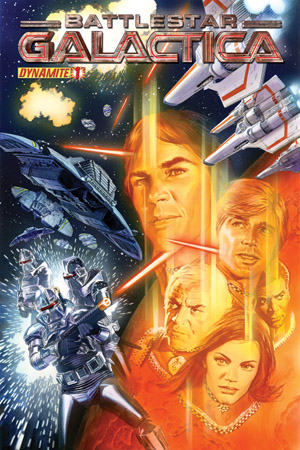 Lastly we get a blast from the past (literally, more in a moment) with Battlestar Galactica #1. Those who were fans of the recent series might be a little disappointed, as this is a reboot of the original late ‘70’s TV show, complete with chrome-plated Cylons and Lorne Green as Adama. It’s intended to celebrate the 35th anniversary of the original series, and tells the tale of Galactica’s two best pilots, Apollo and Starbuck, as they hop into experimental fighters to stave off a surprise Cylon attack. Their new ships are outfitted with new temporal weapons, and before they know it, they are lost in time and space, all alone, with Battlestar Galactica nowhere to be found! The book is fun for those of us who grew up with the original Star Wars wanna-be TV series, but the narrative is all over the place. The initial pages set up Adama as a saddened Commander who’s lost his family and wallows in grief, then takes a hard right turn as it becomes a dual Robinson Crusoe in Outer Space tale about the lost star pilots. Still, it’s campy fun, and worth a short run on any weekly reading list.