I wrote fan fiction before I even knew it had a name, and before I had the Internet. In notebooks or on a hand-me-down laptop with Word Perfect and Paint, I wrote terrible self-insertion Charmed fic. Later, when I did get online, I found the official message board for the short-lived show Birds of Prey. It was amazing: I could share fanfic, play RPGs, rehash its thirteen episodes again and again. Shortly after, came Mutant X and I started posting to a few more message boards, even moderating and creating my own ones. To say I was a fangirl would have been an understatement. I spent hours and hours editing clips of season 3 of Mutant X to my favorite songs, even before YouTube. I had to send these videos to a friend who could afford to pay for a domain. Looking back, I am really impressed with my young self. These days, I don’t have the patience to make videos, or even wallpapers. 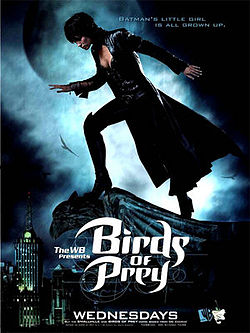 Birds of Prey, image via Wikipedia

I’m not sure when my attention to these shows started to dwindle. I visited fewer and fewer message boards, abandoned my fanfics, and my friend let her domain expire, losing all my carefully crafted vids. At that point, even though I was still a fan, my tastes had changed. I became obsessed with The West Wing and, for some odd reason, films from the 1940s. I made videos about George Lucas and Aaron Sorkin for school projects, and made Studio 60 t-shirts with my best friend. So much of how we express our fandom experience is about connecting with other people. Perhaps, as I found friends offline with whom I could talk about my favorite TV shows and movies, that was why I wasn’t drawn to FF.net anymore.

But in the last few years, I started getting sucked back into the online fandom experience, just as it was starting to get huge. Instead of instant messages and discussion boards, fans now have Twitter and Tumblr to process various obsessions. Twitter makes watching TV shows live more fun with specialty hashtags, some so popular that even the show runners and writers of some shows use the hashtags in their tweets.

As fans, we don’t just let the images soak into our brains, simply liking or not liking something. Instead, we share and analyze the reasons why we like it or don’t like it. We talk about character development and plot as if we were in college literature courses, but with a lot more passion and sense of humor than we might have been able to express in class. We have our own lingo that requires an online dictionary sometimes: flails, feels, OTPs, BROTPs, ships (verb and noun), canon, head canon, and more.

For many fans online, discussing their favorite media critically is not enough. People take it to the next level, by using the images and video to tell their own stories. Elevating it to an artform, fans create photo manipulations of characters that, if you hadn’t seen the specific TV episodes, you would almost believe to be real. The appeal of creating this type of fan art is very satisfying, because of how quickly it can be shared with the world thanks to various social networks. The result also provides us with reaction gifs. Oh so many gifs.

In 2003, while I did watch a lot of television, only a couple of shows really occupied all my time as far as fandom. Sure, I watched Buffy, Angel, and Smallville as well as a few shows that were born and had died with relatively no fan following at the time. However, it did not occur to me, regardless of how I felt about the shows and the characters, to join more message boards. It would have been too hard to get immersed in lots of different fandoms because each fan community existed in a specific separate forum.

It’s so much easier and more accessible now to participate in fandom, mostly because I don’t follow topics on message boards – I follow people. There isn’t a need to create a new account (how annoying!) to discuss each individual show: all you need is Tumblr or Twitter, and finding fans with common interests, there’s quick access to spoilers, photos, and blog posts. Besides connecting with other fans, now it’s also easy to get to know the creators involved with my favorite shows. (Some I follow selectively, but when it comes to Warehouse 13, I think I follow up to six writers, the regular cast, the show runner, and Tom Lieber, a network exec who tortures me with pictures of Jaime Murray.)

Almost a decade ago, of the many people involved with the shows I loved, the only person I’d seen active on the Internet was actress Karen Cliche of Mutant X. She had started her own message board within a host of official boards called SafeSearching (now gone) and actively answered fan questions, shared with us her favorite films and music, and scheduled a meet and greet in Toronto. Most actors reply to fan mail or have fan clubs, but she was one of the few at the time who interacted with fans directly and often. It is hard for me to imagine creators getting any more involved with  fans in the future, than they already are.

Adam Horowitz, show runner for Once Upon a Time has been known to respond to fans on Twitter and even include a picture of a line of script from an upcoming episode. Due to the fan response to the relationship, Warehouse 13 show runner Jack Kenny tweeted a promo photo of Myka and H.G. saying “for fangirls and shippers.” There are even group twitter accounts for the writers’ rooms for various shows, like The Good Wife and Arrow. And then you have the stars of popular TV shows, who do even more to promote their work and respond to fans: tweeting photos from the set, sharing personal snapshots on Instagram, answering questions, and keeping everyone informed about their other projects.

Sure, we are probably overloaded with content related to our favorite things, but for most fans it’s an incredibly immersive and interactive experience. It’s been many years since I’ve gotten so involved with television and I can say I’m having more fun with it now, because so many people are with me, laughing at the same clips and gifs, and feeling the same way I do.

Karly is a geek who works at a bookstore in the Midwest, where she obsesses over sci-fi/fantasy books and TV with her coworkers, and spends the other time thinking about LGBT rights and representation in media. You can follow her on Twitter, where she live-tweets all the TV she’s watching and some other important things.
View all posts by Karly →
This entry was posted in guest post, television. Bookmark the permalink.

2 Responses to Rediscovering TV Fandom in the Social Media Age