It’s funny how the world of comics ebbs and flows. Some weeks we are awash with new series and story lines; others, there are just a handful of new gems to examine. Often, there are loads of great reads with something serious to say, other times it’s just magic, monsters, and spandex clad ass-kickery. This was a week of few new #1’s on the shelves, and in weeks past that’s proven to be a good sign. This week we’ve got a bit of a mixed bag. 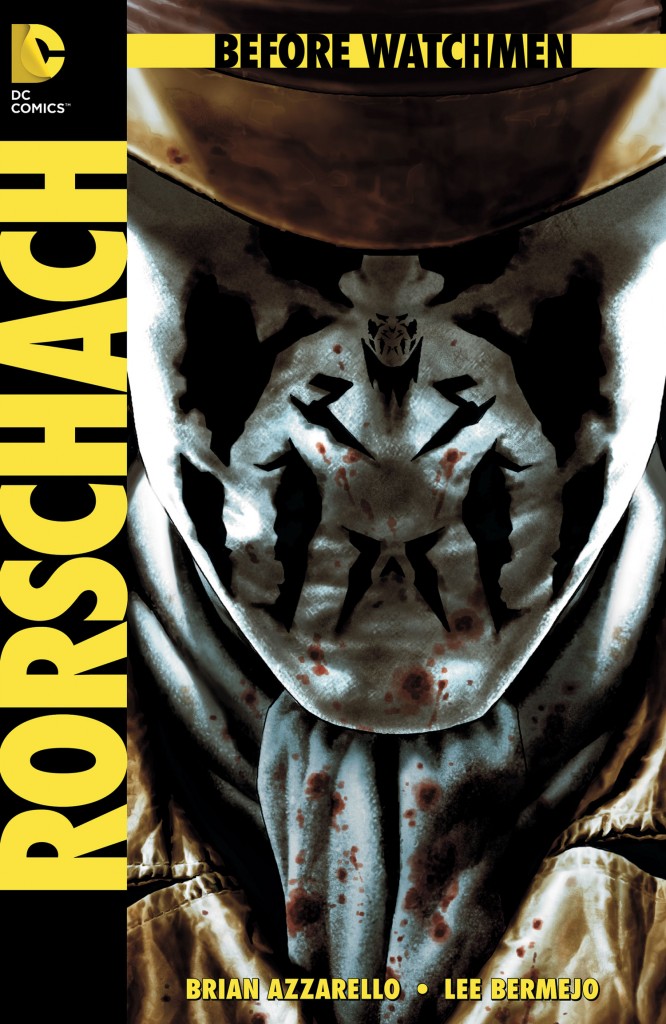 The one that had me raring to go this time out is the next #1 from the Before Watchmen series, Rorschach #1. Certain to be the grittiest of the tales of the world’s greatest meta-heroes, it did not disappoint. This in no origin story, mind you, and while that approach hasn’t hurt some of the other titles (Ozymandius is the best of that bunch), this one is simply Rorschach being Rorschach. He’s unstable, he can’t form a complete sentence, he’s really REALLY pissed off. Thankfully his backstory is one of the most fleshed out in the original masterwork, so we don’t need a lot of background. I think fans of both the original graphic novel, and geeks who later embraced the take-no-prisoners representation of the walking psychological conundrum, might not really want more of a backstory. What we want is a good ol’ action adventure, and this is the beginning of a great one. Rorschach is an unsettled soul brought more fully to life, with the inevitable allusions to his mother’s troubled past coloring his own issues. Speaking of coloring, the art here is top notch, with a beautiful painted feel by Lee Bermejo. This is also the first book in a long time where I remembered that lettering is a nearly forgotten skill, and Rob Leigh is to be commended for his use of typefaces (and even typo’s) to bring the power of the fabled “Rorschach’s Journal” to life.  All that said, even though the book is a good read, there are the usual unfortunate treatments of people of color and women. Here the ladies are the victims, and the people of color are the fry cooks. Rorschach’s a pretty unapologetic guy, and his story isn’t meant to shed light on the better angles of anyone’s nature, but it’s too bad the old stereotypes die so hard. 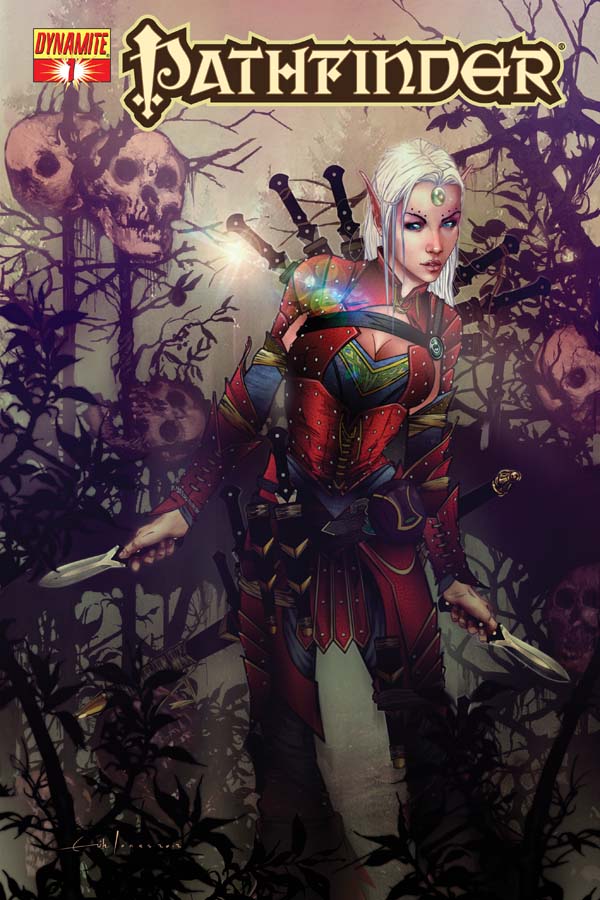 If you want strong ladies, then you’ll enjoy Pathfinder #1 from Dynamite comics. This series is the comic life of the popular Pathfinder RPG, and extension of the world of D&D from Paizo Publishing. It makes no bones about it’s connection to the RPG world, either, and is practically a gaming supplement in and of itself. It includes a map and full character breakdowns at the end, complete with +2 Charisma’s to warm the cockles of the gamer geeks’ hearts. It’s also got two undoubtedly bad ass ladies in it, one a warrior elf swordswoman who’s not afraid to mix it up with the boys, the other a human sorceress ready to take on a little more responsibility than she should, all for her fellow adventurers. There are the old tropes here too, when it comes to fantasy, but this is a realm where the ladies have always gotten a touch more respect than some, and it’s nice to see it continuing. The women talk to each other, and the only one who has a conversation of a romantic nature about a man has it WITH THAT MAN, thankfully, and he comes up a touch wanting. While not as strong as some of the recent female actioners we’ve seen (see previous round-up mentioning Captain Marvel and Carbon Grey, as well as Hilary’s stunning overview of Batwoman), these are some ladies to keep an eye on if you are of the 20 sided dice-bearing ilk. 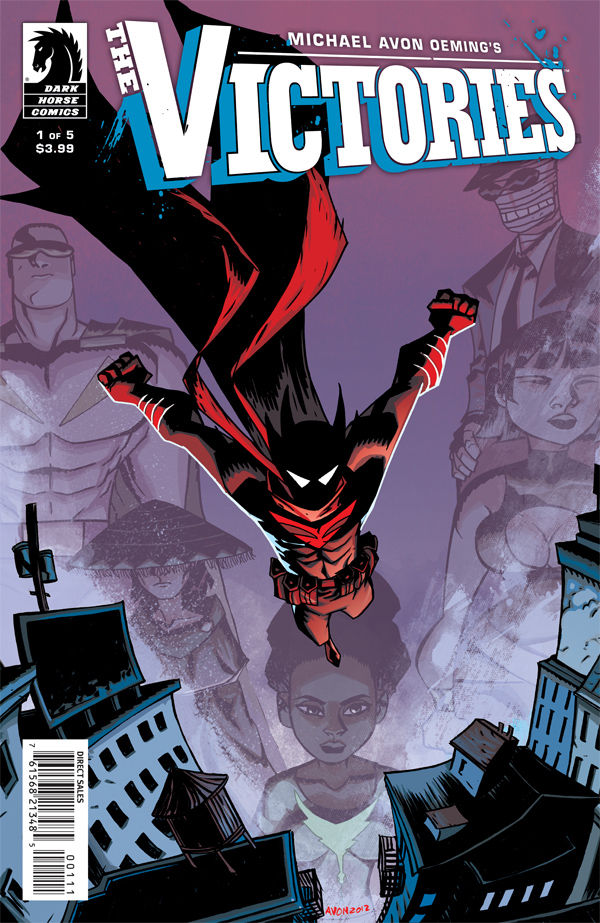 Lastly this week we come upon Michael Avon Oeming’s The Victories #1, a super hero analogue tale, or so it seems to be at first. What’s the city like? It’s full of corruption and violence, of course.  Is the hero ready to clean up the streets? Of course, all the while nursing the wounds of his tortured soul. Will he have a black costume, flowing cape, and pointy things on his mask? Why the heck not? Seriously, the cover looks like such an obvious Batman rip-off I was afraid I’d get sued for copyright infringement just for having it in my car. Here, the “hero” in question is Faustus, a rather devilish turn on the Batman, yet he’s not the billionaire playboy type we might have been expecting. He seems to be troubled, certainly, but his troubles are something that make him a bit more human than even Bruce Wayne. He largely seems condemned to mentally torture himself for not being a particularly good superhero. He’s a bit too late on the scene to prevent a rather grisly murder by a rather grisly fellow vigilante who’s not afraid to take the old adage “rip off your head and $#!T down your neck” very, very seriously. Faustus is only one of this world’s super team known as the titular “Victories” and we get the feeling from this first issue that if they are all as internally flawed as their fist member appears, this story might be less about cleaning up the city and more about cleaning up the heroes themselves. The language and violence here are certainly for mature audiences, and the words of the villain are the most socially interesting part of the tale, as he confronts his victim, a corrupt judge, and questions the innocence of his wife for standing idly by her husband.

And that’s about it for #1’s this week, with the exception of the unread Popeye #1. This is clearly a kids comic and contains both some older classic stuff and some new works as well.  Pick it up if you are into that sort of thing or have little ones around.