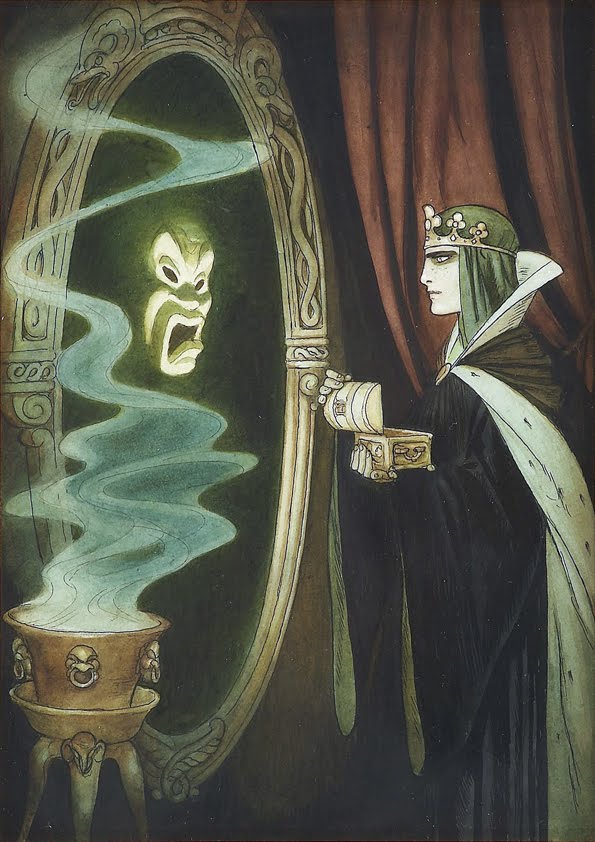 Contributors on this site have discussed the concept of Otherness, of feeling like an outsider, at length. To put it simply, women of color haven’t always had characters in whom we could see ourselves, or aspire to, within mainstream media. Disney is often referenced as one of the biggest perpetrators of depicting a pervasive image of White femininity in children’s entertainment. It is a valid critique, since Disney only has four women of color within its official “Disney Princesses” line, and none of them go further back than 1992 (Aladdin’s Princess Jasmine being the first), leaving most of us to find inspiration and role models elsewhere. Which brings me to Disney villains and their powerfully subversive quality, inherent queerness, and marginalized appeal.

As a child, I identified more strongly with the likes of Snow White’s Evil Queen, Sleeping Beauty’s Maleficent, and The Little Mermaid’s Ursula, than I did with any of the titular heroes. After all, what did I – a chubby, awkward mixed girl who got bullied for using comically big words for her age and liking school – have in common with these flawless White girls who were desired by men and envied by women, to the point of meticulously planning and obsessing over their destruction? I looked at the Evil Queen (whose name is actually Grimhilde) and saw my own insecurities and jealousy, my deep-seated need to be loved by all and to hold power over my own destiny. This was a woman who commanded others, and who, when others failed her, could read a book on potions, whip up a solution, and shape her future. Her fears drove her to seek out control, and once she had it, she maintained that control. She would have gotten away with it too, if it weren’t for those meddling dwarves! I dressed as the Evil Queen for more than one Halloween, wanting so badly to embody her commanding presence, power, and fierce beauty. I didn’t recognize Snow White, with her meek voice, endless kindness, and naivete. (Pro Tip: when you run into a sketchy old lady in the middle of the woods who won’t stop cackling as she offers you fruit, don’t eat it!) As a result, her story and personality did not resonate with me.

In Sleeping Beauty, the dichotomy was much the same. Aurora was too sweet, too beautiful, too in-tune with nature; Maleficent, on the other hand, was one of Disney’s most formidable enemies, and a snappy dresser to boot. She commanded minions and held an entire kingdom in her spell, all because she didn’t get invited to a birthday party. She sought revenge only because she had been excluded and disrespected, the only thing that could stop her was magic equal to her own. What else can a young girl seeking love and acceptance look for in a hero? She turned into a dragon, for god’s sake. It doesn’t get much more badass than that. 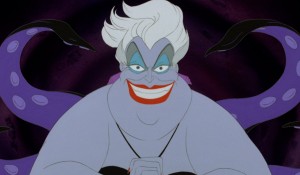 Finally, let’s talk about Ursula. The sea witch shares many qualities with the other lady villains, in addition to being fat and fabulous. Within The Little Mermaid’s value system, Ursula’s body serves to further code her as bad and wrong. She is the big, fat, scary witch to Ariel’s young, slim, perky and fresh-faced teenager. And yet, Ursula’s self-assured and overt sexuality, as well as her refusal to apologize for both her attitude and the space she takes up, are a revelation. In order to enact her revenge on Triton for banishing her, she plays into the short-sighted desires of his subjects (which eventually includes his daughter), hoping to gain enough leverage to regain power and control. Ursula’s plan is fairly ingenious, relying on the weaknesses and selfishness of others to make up for her lack of influence and physical strength, as she works around a system she knows is rigged against her. Why wouldn’t a young girl with a knack for problem solving find such qualities admirable?

The lack of romantic interests for any of these antagonists, and their isolation from the rest of their respective societies, further codes them as queer, making them an even greater source of inspiration for strong, independent ladies who like other strong, independent ladies. This of course does not negate the implied homophobia in the Disney universe, where every beautiful, “normal” young lady falls in love and marries a handsome young man. The villain is the older woman, so overpowered by her lust or jealousy for the younger woman that she is driven to destroy her. However, it’s easy to see why budding lesbians might choose to identify more with these grown women who have forsaken the company of men to fulfill themselves instead, reclaiming such characters as queer anti-heroes. That’s not to say that subverting the heteronormativity of the Disney-verse by imagining the main characters themselves as queer does not serve the same purpose: scores of fanfiction and fanart will attest to that, which is a separate post for another time.

So here’s to the bad girls! Thanks for giving heroines to those of us who weren’t as pretty, White, thin, or well-connected enough to imagine ourselves as princesses. You taught us that “nice” is a luxury not everyone can afford, and that a white knight on a valiant steed bearing “true love’s kiss” is not a requirement to kick some ass. Thank you for doing bad all by yourselves before it was cool, and letting us believe in making our own happy endings.

This entry was posted in childhood, film and tagged Disney, lgbt, otherness, villains. Bookmark the permalink.