Spera and a Conversation with Josh Tierney 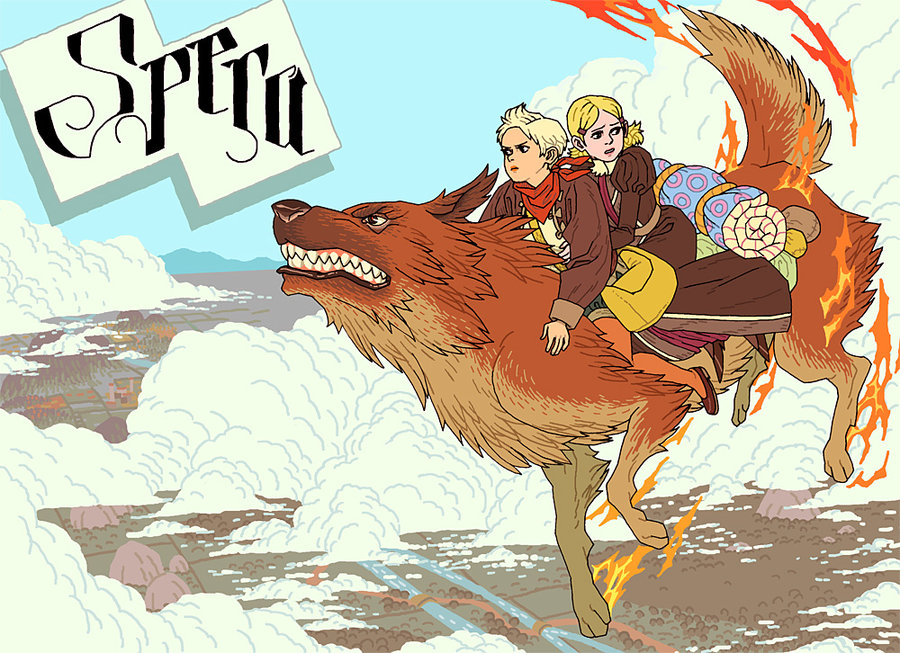 I can’t quite recall how I stumbled onto the online comic Spera, but once I had, I was hooked. The original online comic is a collaboration between writer Josh Tierney and an impressive score of artists (too many to mention individually, but all delightful and talented, with a unique style). The story follows the adventure of two young princesses, Lono and Pira. The girls are forced to flee their warring kingdoms and decide to make their journey towards the city of Spera, accompanied by Yonder, a fire spirit. Their personalities are very different but both girls develop a tender, supportive friendship and learn something new about each other. Pira is a bit of a tomboy, dreaming of the adventurous life of treasure hunting and travel, while Lono is a bit more demure but book smart and open minded. Through their friendship, the girls are able to talk about their dreams and hopes, and in Lono’s case, she bravely overcomes her fears and blossoms on their journey. 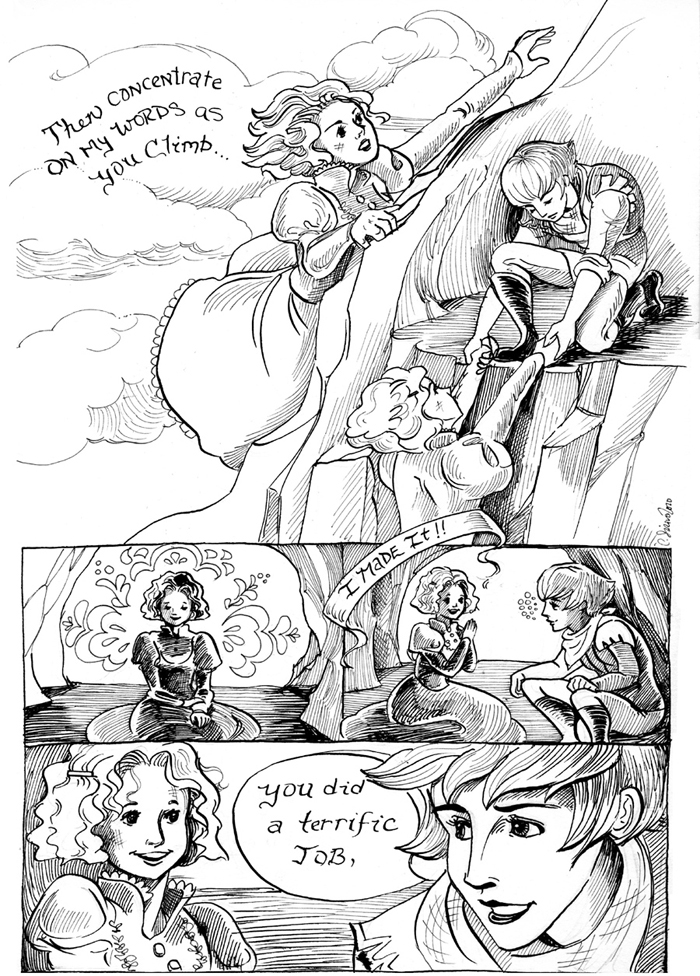 The writing and the plot of Spera remind me of the sort of fantasies I used to dream up as a kid, reading adventure and fairy tale books, imagining myself on a daring and magical journey. Lono and Pira occupy a world where they make the rules, an escapism many kids would welcome. They make new friends as they journey, and Yonder provides a level of protection and gruff affection: just enough guidance to make do. However, the girls have to learn and make up the rules as they go along, and they often face danger. The stories sometimes take a turn for the dark, while at other times several pages are devoted to dreams and conversations. Each segment is interpreted in unique ways: Angie Hoffmeister‘s dark and subtle water colors, Muura‘s whimsical touch, Kyla Vanderklugt‘s picture book style. 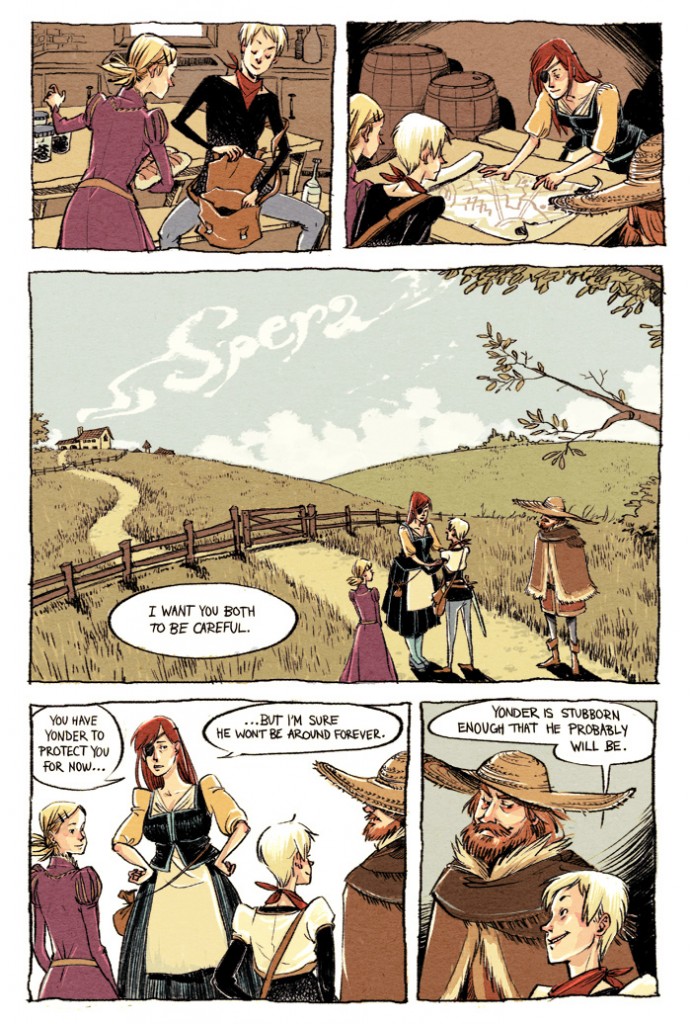 After the initial collaboration that set the stage, Lono and Pira’s adventures continue in individual stories posted online fairly regularly. Earlier this year, Archaia Entertainment published Spera: Volume 1, a beautiful hard-cover book. Besides being a fun, enjoyable read, Spera also is an exciting example of collaborative fiction, where art and story serve as a constant back-and-forth influence. Recently, I caught up with Josh Tierney, the author, and we chatted about his background as a writer, his inspiration for the characters, and his future plans.

Tell us a little bit about your background, as a writer or in general, and what got you started writing a comic book?

I have no formal training for writing outside of creative writing classes in elementary school and high school, and those were pretty awful (well, the elementary school classes were actually fun). It’s probably part of why I chose to be an autodidact: it seemed English and creative writing teachers were never teaching me what I wanted to learn. Instead I obsessed over select essays from the theory books my wife read in university. I feel I respect boundaries enough to know when to break them, and by being self-taught I’ve had more time to learn about structure and perceived rules while also cultivating a style of pure imagination, which I refer to as absurdist writing.

I’ve always wanted to write comics, but for the longest time believed no artist would be willing to stick out such a large undertaking with me. Before Spera, my collaborations with artists consisted of title images to short stories and novellas on my personal site. I often sought out aspiring comic artists for these miniature collabs, and for me it was a way to see how other people visualized my words, as well as learn more about the artists’ different processes. This was all done from 2004-2010, and what I’ve learned from these collaborations I’ve taken with me into my writing and editing work for comics.

When I finished my last online novella, an artist suggested I take all the artists I’ve worked with and make a collaborative comic with them. This was how Spera began its life as a comic.

Did you read a lot of comics growing up? What were/are some of your favorites, both in the past and currently as an adult?

When I was a kid I’d read whatever comic I could get my hands on, though I favoured indie and literary comics like Bone, Cerebus, Akira and anything I could find by Neil Gaiman. In my early twenties I became a fan of BECK by Harold Sakuishi and Yotsuba&!. As an adult I’m always sure to check out the latest Old City Blues, and I just started following Dark Horse Presents for Amala’s Blade. I’m generally drawn to anthologies and zines to see what kind of new artists I can discover through them.

What are some of your favorite female characters (young or old) who are in comic books and fantasy fiction? How might some of them inspire the way you write a female protagonist? 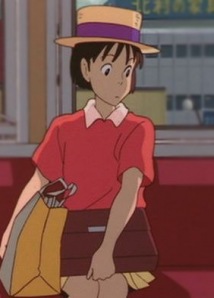 Well, I can answer with just about any Studio Ghibli movie. Specifically, it’s a good excuse to mention Whisper of the Heart, my favorite film (and what I consider the greatest film ever made), and whose Shizuku inspires me to write every time I watch it. Thorn in Bone is another good character.

I’m honestly not inspired by anything in particular when it comes to writing female protagonists: I write [them] because I like to. There isn’t a deeper meaning to it for me, though sometimes I try to come up with one. I believe this is one of the reasons Spera appeals to males and females equally. When it’s clear the creator is trying to make some kind of point with a character, it takes me out of the story. The story becomes dressing for a form of essay at that point, and is no longer setting a good example for others. Basically, by simply presenting strong female protagonists as characters and not elements of a narrative essay or argument, the characters will become more believable, interesting and human.

I was talking about Ghibli films on Twitter not too long ago, and Jordyn F. Bochon pointed out that Hayao Miyazaki is a true feminist. Of course he is, and it’s because Ghibli films – with their strong female protagonists – are made for absolutely everybody. I feel one of the biggest mistakes a feminist can make is writing only for feminists. This, of course, goes for any movement. If someone is looking to expand minds, they need to do so by expanding their audience and setting good, memorable examples.

Let’s talk about Pira and Lono, the main characters in Spera. Where did inspiration for the girls come from? Childhood friends or sisters, maybe?

The characters aren’t based on real people, though sometimes flashes of my wife came out in Lono in the original novella, [and] I have no sisters. 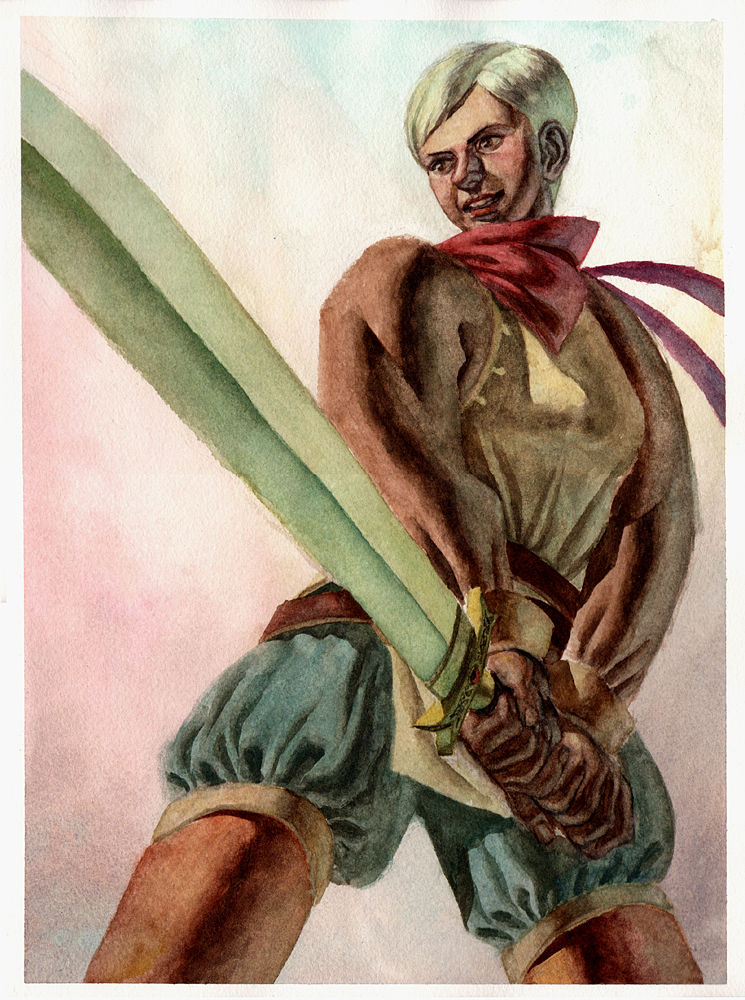 I found Lono on a mural in the Panthéon in Paris. It was a court scene and off to the side was this girl with short blonde hair, her finger toying with her necklace and her feet dangling off a stone bench. The first page in the Archaia version of Volume I was drawn by Kyla as an homage to this image. Everything I needed for Lono rushed into my head the moment I saw this mural.

Pira was originally going to be a punk rock girl dropped into Spera’s fairy tale world, with short white hair, a black sweater and ripped jeans. This was how she was written in the original novella that the comic came from, and her design, outside of her white hair, is purely Afu Chan‘s.

How far ahead do you plan out the story when writing Spera?

I decide on the beginning and ending of the main story in each Archaia volume, then join the characters on their journey through the middle. These main stories are supplemented by the shorts that appear online and in the books, and it’s with the shorts that I’ll jump back to the characters’ pasts and flesh out some of the details I find interesting.

How much does the visual element influence the story going forward? Do you ever look at a finished chapter and say, Hey something in these drawings is making me want to explore a very different angle? Or perhaps, knowing that you’re going to collaborate with a specific artist and knowing their style, you might add a chapter where they can really go wild with it?

Afu Chan’s designs for the characters essentially completed them. The artists’ styles define a lot of what I write beyond dialogue and general character interactions. While Volume I was based on a novella, Volume II will be purely in this mode: I wanted to see Giannis Milonogiannis draw characters interacting with each other on a human level for his chapter, so I wrote a lot of that for him, along with a fun, badass fight sequence to depict; I asked Kyla Vanderklugt what she’d want to draw, and her response was ‘Pira hitting things with her sword’, so her chapter is almost entirely that; Afu is great at drawing tense illustrations of tough-looking dudes, so his chapter has a quite a bit of that, along with some very intense battles; and Timothy Weaver is great at funny, confessional comics, so I wrote something that might feel like an autobiographical comic created by Pira or Lono. I do what I can to make Spera feel like a true collaboration for all involved.

The girls are on an ongoing journey of self-discovery. What are some key messages that you hope younger readers, girls in particular, might take away from the story?

If there’s a message in Spera, it’s just to be honest with yourself, whether that means breaking free from gender stereotypes or seemingly conforming to them. I find people are generally happiest when they’re true to themselves: it’s really okay to be ‘boyish’, it’s okay to be ‘girlish’, and most of all it’s okay to be ‘you’.

What’s next for Josh Tierney? Anything you can share about other projects you’ve got brewing?

Archaia seems to be aiming for an autumn release for Volume II, so Spera fans can look forward to the main story continuing then. I’m also in the middle of printing Magical Girls  for Toronto Comic Arts Festival (May 5-6), which will be my first convention appearance of the year. I’ll be joined at TCAF by Kyla Vanderklugt, Hwei and Victoria Grace Elliott, and other Volume I artists such as Emily Carroll, Jordyn F. Bochon and Luke Pearson will be there as well.

I’m currently working on some projects I’d like to pitch to publishers soon, such as a fantasy anthology I’m editing with Paul Maybury, a videogame-influenced action comic with Sloane Leong and Jen Lee, and a sci-fi series. I’m very excited about all of these, and we just need to find publishers who feel the same way!

You can read the original Spera comic online and purchase Spera: Volume 1 from Archaia.

Have any comments or questions? Comment here, as well as check out more of Josh’s projects at JoshTierney.com, on his Tumblr, or follow him on Twitter.