Can we take a moment to bow our heads in memory of the late Whitney Houston and her hit single “The Greatest Love Of All” which I have been playing on a loop a) because it’s Thursday and b) because I really do believe the children are our future, we should teach them well, let them lead the way, show them all the beauty they possess inside, and give them a sense of pride to make it easier. Because, the world is pretty tough, and the wild west that is The Internet is even tougher. 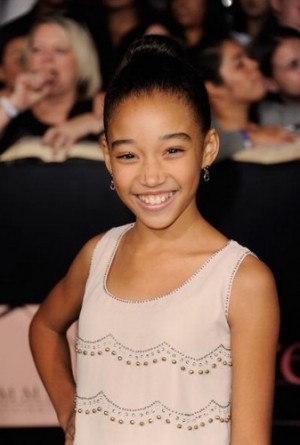 At 13 years old, Amandla Stenberg is set to become a hot topic in the world of Hollywood casting. Most of us first saw her in the Zoe Saldana action flick Colombiana, playing a younger version of Saldana. Suffice it to say, she owned the role, and once news came around, most people were pumped to hear she would be playing fan favorite Rue in the screen adaptation of the popular YA book The Hunger Games.

But, as you may know, The Internet is not “most people”. Since her casting was announced and even after the film was released, Stenberg has been inundated with hateful messages regarding her race. Consequently, the character that she plays in the film is explicitly Black, but according to the Internet, Blackness and innocence are somehow mutually exclusive. We won’t get into too much detail here, but our friends over at Racialicious, The Mary Sue, and The Huffington Post have been gracious and iron-stomached enough to follow the whole thing from tweet to vile tweet. Instead, we here at Geekquality would like to take this time to give Stenberg’s camp some words of encouragement.  (If you’re on Tumblr, you can reblog this post to spread the words of support, as well as check out the heart warming number of co-signs from Tumblr fans across the web).

You go girl! Pay no attention to the haters behind the curtain, because, as you know, you have scores of people rooting for you. You are talented, and quite frankly you’ve dealt with this whole thing better than a lot of adults we’ve seen. You are doing something that a lot of folks could only dream of, and you are doing it well. We wish you nothing but the best. And if anyone, and we mean anyone, tries to bring you down, don’t let them. You Rosa Parks this thing all the way to the end of the line, don’t give up your seat for anyone offering you less than the best, because that is what you deserve, and don’t you forget it. So get right out there in the spotlight and show them all what you’ve got. We’ll have your back.

This entry was posted in film, oh internet, race. Bookmark the permalink.