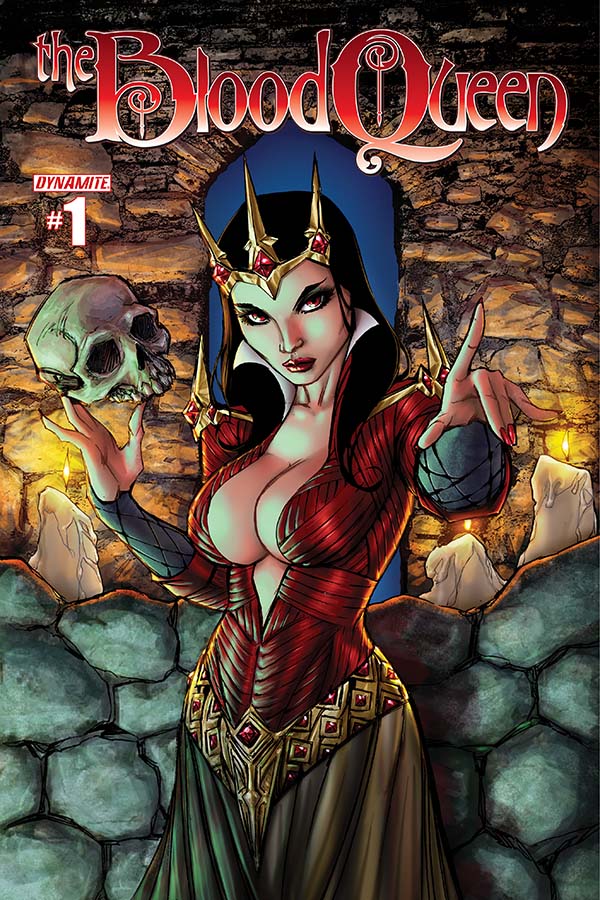 The best of this week’s new series, Dynamite Comics The Blood Queen #1, was a big surprise based on the cover. The image evokes some of the horrors of Zenescope’s most reviled work, but the story itself turned out to be something very different indeed. Written by Troy Brownfield with art by Fritz Casas, the book is a fantasy epic loosely based on the notorious Countess Elizabeth Bathory. Here, Elizabeth is a magical healer brought to the court of the king to cure his sick child. She is seemingly ignorant of the ways of Court life, but it’s soon revealed to be quite the ruse. Elizabeth is able to break the blood magic cast upon the baby and find the villain who cursed the child, ingratiating herself to the King and his servants, in particular the “handsome” knight Sir Ferenc and the King’s adviser Jon Hunter. She is at times flirtatious and beguiling, often brave in battle, and sometimes feigns innocence of the ways of the world. It’s this depth of character that makes Elizabeth so interesting. I finished the first issue unsure if she is the protagonist or the antagonist, and that mystery is one of the reasons to return to the book’s next issue. Elizabeth is a great character: strong and capable to be sure, but with her own agency, especially when it comes to her sexuality and her body. She’s often depicted as the buxom maiden, as is common in fantasy literature, but her allure is one of the many weapons in her arsenal, and she wields it with aplomb. 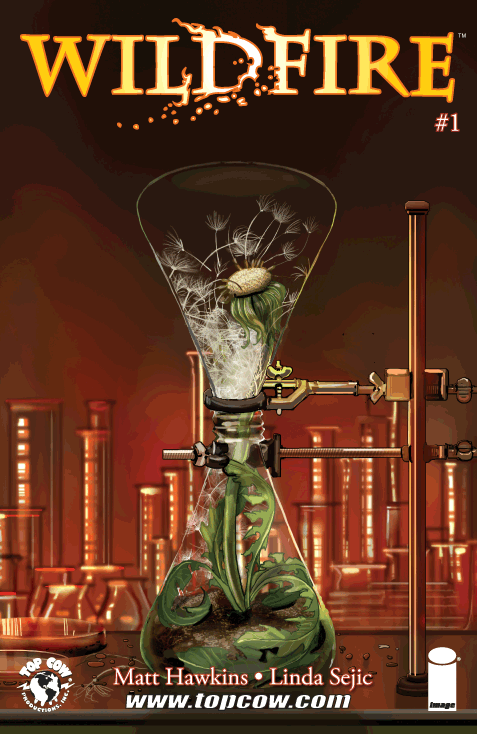 When it comes to on the nose messages of intent, none do it better than writer Matt Hawkins. The creator of Think Tank has a new science based book at Top Cow and Image this week, with artist Linda Sejic, and it’s a no holds barred accusation of the genetically modified food industry. Wildfire #1 is the story of a handful of doctors desperate to solve the world’s food crisis. Their genetically engineered, fast growing seeds aren’t quite ready for prime time, but their funding is in jeopardy, so the scientists stage a demonstration with a seemingly ubiquitous and harmful plant, the humble dandelion. An angry protester at the demonstration knocks over the tank, and the scientists awake to find L.A. covered in the weed. The images of the L.A. Coliseum overgrown with the puffy seed pods are arresting, as is the eventual fire that breaks out in the weed growth, consuming the city. Hawkins, as he did regularly in Think Tank, also includes several pages of scientific information about GMOs, with a presentation of the arguments both for and against. Hawkins’ viewpoint is quite clear (he set all of Los Angeles on fire to make it, after all), and the book’s heavy political and social message will stick with you. 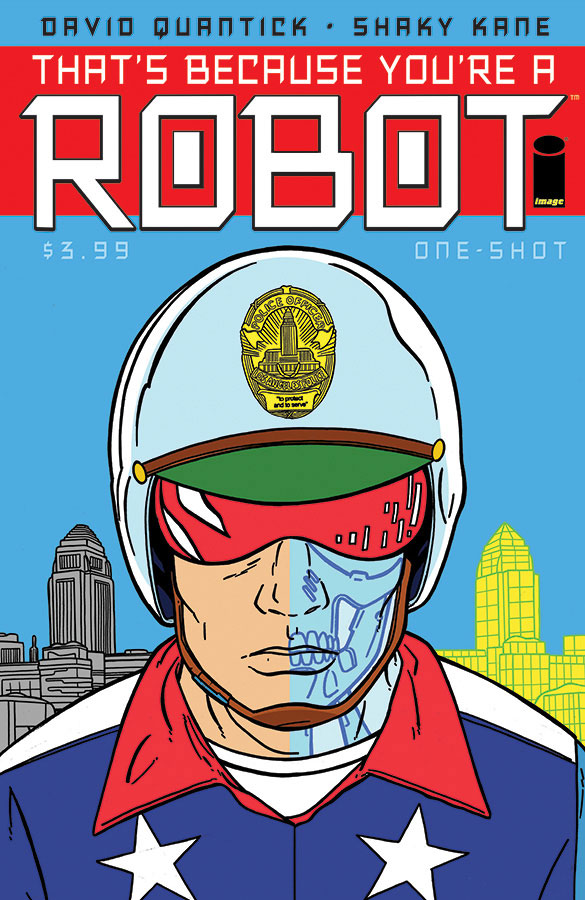 Image had a few other offerings this week, my favorite of which was David Quantick and Shaky Kane’s one-shot That’s Because You’re a Robot. It’s the story of Jeff and Matt, two cops who are partners in a near future Los Angeles that’s masterfully rendered by Kane in his typical in your face graphic DayGlo style. Think Love and Rockets, with the colors turned up to 11. Matt and Jeff find out from their boss that they have one little problem: one of them is a robot, but no one knows which one it is, especially not the two of them. The two cops spend the entire book second guessing and accusing each other of being a robot, making myriad mistakes along the way. They fail to recognize an undercover operation when it’s right in front of them, they miss sensitive information a witness is trying to share with them, and they even manage to accidentally kill a suspect. All this happens because the two men can’t manage to see beyond the shocking news and realize that they are, regardless of the truth of their creation, the same people they always were. It’s a fantastic take on the idea that our differences are what make us who we are, and that there is more that brings us together than separates us. Sadly, we often focus on those differences, largely to our own detriment, and this parable is hysterically presented at the core of this unique comic. 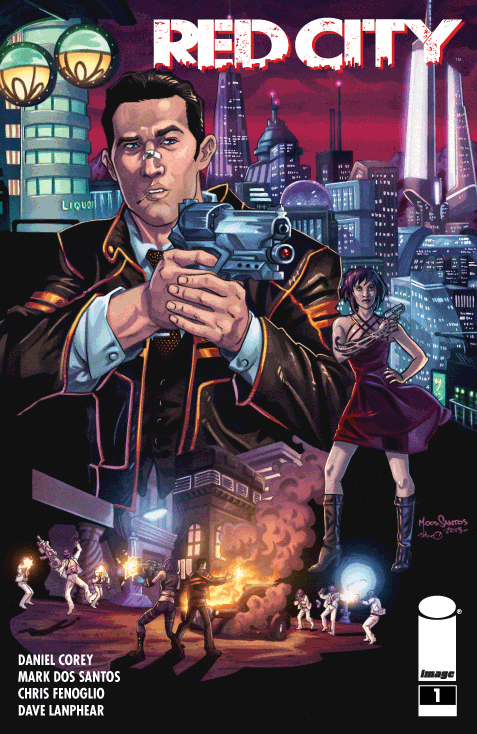 Red City #1, meanwhile, had no such interesting metaphorical ideas, but that’s not to say that it was in any way offensive or lacking in effort. Written by Daniel Cory with art by Mark Dos Santos, Red City is sci-fi meets noir. “Hard-nosed” Interplanetary Investigator Cal Tamadge is on the hunt for the missing daughter of an alien diplomat and he’s hoping to find her before treaty negotiations break down, as he turns over every alien underworld rock for clues. This has all the dirty cops and seedy nightclubs of the best Bogart era flicks, dotted with enough aliens and sci-fi technology to fill a trilogy of laser dramas. It also features what appears to be the new standard “Strong Female Character” as a sidekick, a tattooed and booted femme fatale known as Angel. Sadly, Angel only makes a swaggering entrance, is pointed out by Cal as the narrator, and then flirts with a handful of men right before a gunfight without being part of the story at all. In fact, her use of sexual tension is all done via body language. Angel doesn’t actually speak a word in the entire book. If she has any of her own agency in this story we don’t see it in issue #1, and that makes me uninterested in returning to the book. 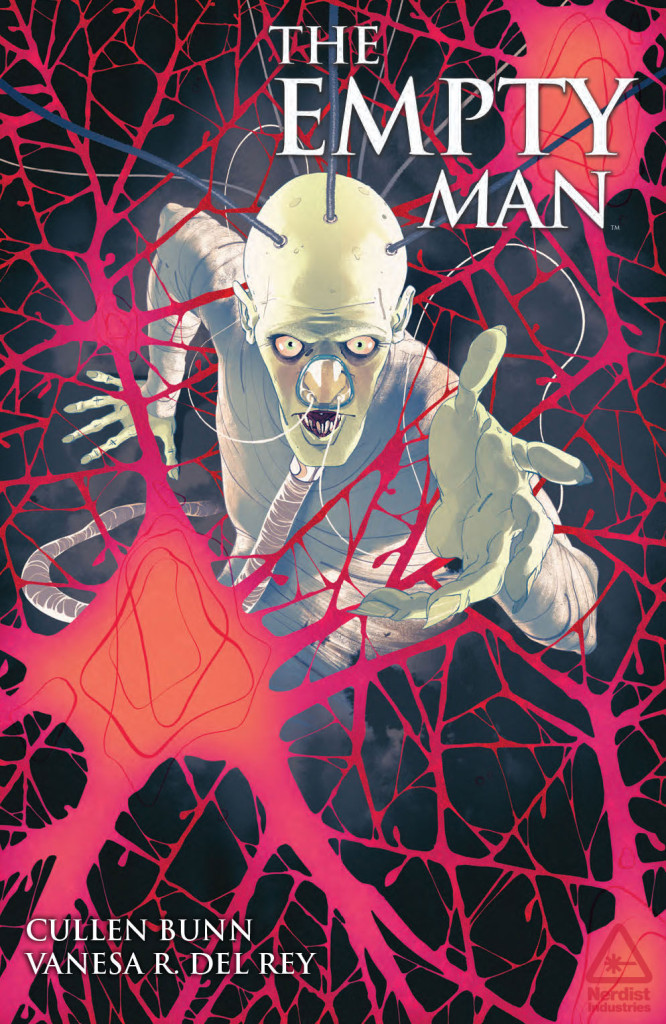 Lastly we have a nifty little piece of horror mixed with police procedural in Cullen Bunn and Vanesa R. Del Rey’s The Empty Man #1. The Empty Man is actually a disease that spreads across a somewhat dystopian future America, causing outbursts of rage, hysteria, hallucinations and catatonia alike. Its spread is unpredictable, and it has taken on near mythic proportions around the country as murderous cults rise up in its wake. Agents Langford and Jensen of the joint FBI and CDC task force are tasked with discovering clues to the origins of the mysterious disease, but they admittedly have no idea what they’re tackling. The case gets stranger when they bring in a local man who is part of one of the cults that worships the disease like an ancient god, known at The Witnesses. Langford is a man who doesn’t get along with his hard nosed partner, a woman of color who’s very much the “bad cop” in their dynamic. Jensen is tough and rude, and though there isn’t a great deal of character development so early in this story, we get the groundwork of a woman who isn’t ready to believe in a bigger picture just yet. Langford might be ready to go to another level, but Jensen is very grounded and tough, and it makes for an interesting dynamic between them. Overall the book has a chilling quality, due largely to Del Rey’s rough edged and dark pencil work. It’s both the raw edges, and the grim, sometimes monotone palate from colorist Michael Garland, that give this book its scary feel, and it’s one of the better horror comic first issues I’ve read in a long time. This is a far cry from Bunn’s signature Western Horror series The Sixth Gun, and it’s a creepy turn that’s going to be worth sticking around for.