When we first meet Melanie Tamaki, the shy and neglected protagonist of Hiromi Goto‘s Half World, she is running with all her might, as she is being chased down the street by a pack of bullies who are slinging pebbles and harsh insults at her back. The opening scenes introduce us to a downtrodden protagonist who seems unlikely to become her own hero. However, deftly weaving together elements of horror, fantasy, and Chinese and Japanese spirituality, Hiromi Goto turns the hero’s quest on its ear, providing us with a believable heroine and a thrilling, fantastical coming of age story. 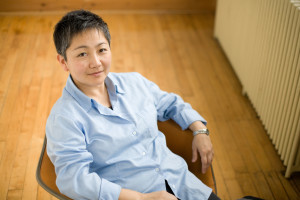 Melanie is a teenager who has been left to scrape together small bits of comfort while her ailing, disinterested mother spends most of her days wasting away in a daze. The Half World of the title refers to the otherworldly, purgatory setting where Melanie must find her mother, who has disappeared suddenly. But Melanie has already been living in a half world, of sorts; it is a world frequently occupied by impoverished and misunderstood children who must carve out a safe space for themselves when neither home life nor their school provide it. Melanie’s comfort is found with crows circling about the dock side of her town, and with the surly but compassionate neighborhood grocer, Ms. Wei, an older woman who has lost her partner of many years, Nora Stein, and now resides in a world of whispered stories and piles of books.

The beginning of Half World is bleak, and the story gets more unsettling as Melanie finds out her mother is at the mercy of the main antagonist of the novel, Mr. Glueskin, who rules over a nightmarish Limbo. With encouragement from Ms. Wei and several good luck charms, Melanie sets out on an unlikely quest, finding herself in a ghastly, desaturated world that’s equal parts M.C. Escher and Hieronymus Bosch. The residents of this world are souls trapped in repeated cycles of their torment and Melanie’s human fragility and unpredictability may help her find her mother and return home safely, but may also be her own undoing. 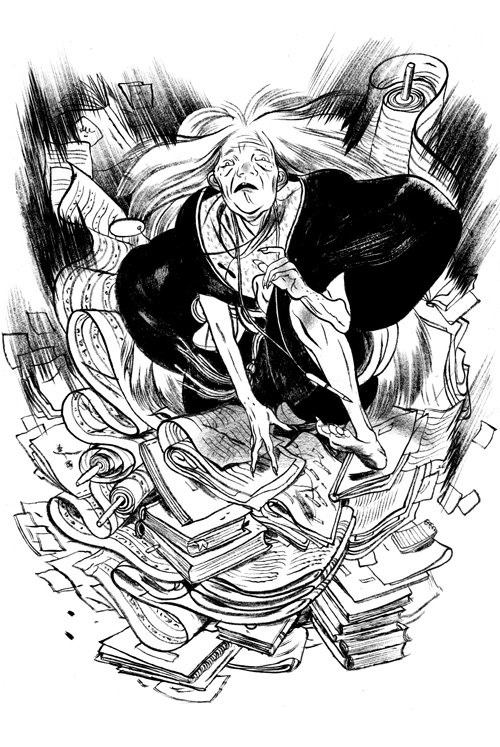 Illustration by Jillian Tamaki, one of the characters Melanie encounters in Half World

What some might find unlikable or detached about Melanie’s personality – she’s often grouchy and impatient, and prone to moments of self-pity or denial – I find believable, and it made me feel protective towards the girl. My favorite kind of a hero isn’t one who is full of established self-confidence, but an uncertain one who needs to realize her strength and sense of self through independent action. While Melanie has certain tokens with her to help her along the way, it’s her own ability to blend into her surroundings, carefully pay attention, and think on her feet that ultimately serve her best. In Mr. Glueskin, and in his ramshackle world of “dark shadows, jumbled silhouettes of cities and jungles, forests and villages,” there are elements reminiscent of Neil Gaiman and China Miéville, as well as a little bit of Clive Barker’s Weaveworld. (I will sheepishly admit that in drawing comparisons, I realized that I need to read more horror fiction written by women.) This is fantasy fiction with a good balance of horror – the toll required to cross to and from Half World, for example, is particularly gruesome, and many of the residents of Half World are down right macabre; half-man, half beast, and often horribly disfigured, they amble, slither and giggle. The book is also peppered with drawings by Jillian Tamaki, who also did the beautiful cover illustrations. They add the same sense of dark, foreboding ambiguity that envelopes the whole book.

All in all, this is an interesting fantasy story of self-discovery, redemption and rebirth. What flaws I might have found with the pacing, or lack of explanation for certain key plot points – like why the state of Half World got to be what it is, or certain elements surrounding Melanie’s birth – I am willing to overlook them over the bigger picture. In Melanie, Hiromi Goto has created a strong heroine who is rarely seen in the landscape of YA fiction – an overweight, poor young woman of color, who is able to find resolve and a sense of self-appreciation that she didn’t know she had. A notable book with a character you should take the time to get to know.

This entry was posted in books, YA and tagged book review, fantasy fiction, Half World, Hiromi Goto, horror fiction, Jillian Tamaki, YA fiction. Bookmark the permalink.

1 Response to Book Review: Half World by Hiromi Goto